Osaka Municipal Subway is an indispensable organ of Greater Osaka public transport system and is the primary mode of mass transport in the Kansai region, Japan. This electrified metro system serves Osaka and nearby cities of Kadoma, Higashiosaka, Sakai, Moriguchi, Yao and Suita in Kansai region. Currently, it consists of 8 lines and a people mover, connecting total 133 stations along a 137.8 km long track.

Every day, around 2.29 million commuters travel through this subway system. In terms of annual ridership, it is 8th in the world. One of the big advantages of the metro system is that it allows easy commute to the Kansai International Airport.

Osaka Municipal Transportation Bureau is operating the lines. Osaka metro uses either third rail system or overhead catenary for electrification. Despite having all of the features of a full-service metro railway, this subway system is actually registered as a tramway.

Osaka is the main city of Japan’s second largest metropolitan area Keihanshin. With a huge population and consequently high volume of commercial activity, this city and surrounding areas constitute a major hub of Japan.

Easy to understand in such a big region, managing traffic was always a concern for the local government. Again, the construction was necessary to provide a means of employment to the unemployed workforce of the city. In1933, between Umeda and Shinsaibashi stations, the first line of Osaka Municipal Subway, Midōsuji Line was started operation.

Construction of the further lines was stopped due to the World War II and began again after ceasing of war. Midōsuji Line achieved its current length in 1987. It is, at this moment, the second longest metro line in the city of Osaka.

The Yotsubashi Line started operation in 1942 between Daikokuchō and Hanazonochō. It achieved its current length in 1972. In 1961 an elevated portion of Chūō Line between Ōsakakō and Bentenchō was opened. After many extensions, the current track length was achieved in 1985.

Tanimachi Line is operational since 1967. Initially, revenue service began between Higashi-Umeda and Tanimachi Yonchōme. In 1983, the last extension took place from Moriguchi to Dainichi. 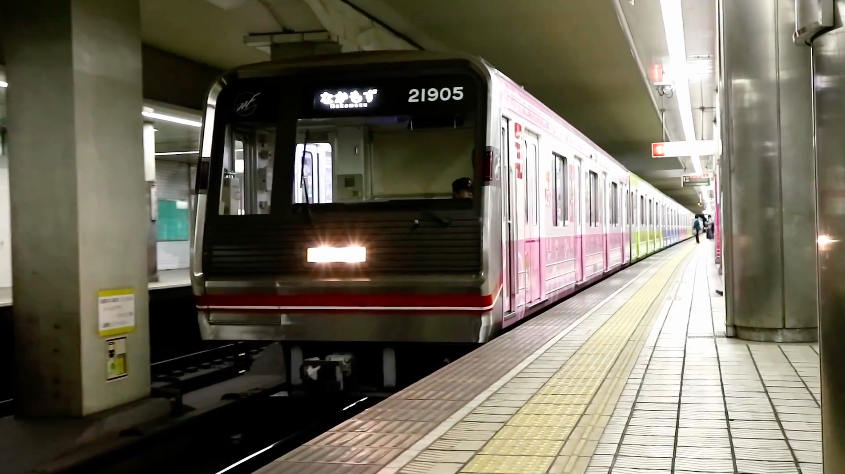 Trains of Osaka Municipal Subway run from 5 AM to 12 AM. Trains are available every day of the week. However, on weekends and holidays, only fewer trains run. On rush hours, one train comes every 3-4 minutes, rest of the day, every 7-8 minutes. Train frequency may vary depending upon the particular line.

View the timetable of first and last trains on different lines here.

The current system includes 8 lines differentiated by color, symbol and name. The station names are created using the first letter of the line name and the station number. The total track length of these 8 lines is 129.9 km covering 123 stations. In addition, the system also includes an automated people mover which covers another 10 stations.

This is the first metro line of Osaka Municipal Subway and the second metro line in Japan. It is again the busiest line in the whole system. Midōsuji Line is also called Osaka City Rapid Railway Line No. 1 and Rapid Electric Tramway Line No. 1. On the map, this line appears red and is marked with the letter M. The line is constructed just under the north-south main street Midōsuji and hence the name.

The track is 24.5 km along 20 stations. Some of the stations are elevated; some are underground. At present, 10 car trains run on this line.

From this line, one can transfer to other railway systems e.g. Kita-Osaka Kyuko Railway and Hankyu Railway and also to other lines e.g. Sennichimae Line and Tanimachi Line of Osaka Subway system. A complete travel on this line takes around 40 minutes time.

It is again a north-south line running parallel to Line 1. It is also called Osaka City Rapid Railway Line No. 2 and Rapid Electric Tramway Line No. 2. On the subway map, it appears royal purple in color and is marked with Letter T.

The line is 28.1 km long and covers 26 stations. It runs through Tanimachi-suji where most of the Buddhist temples and important government buildings are located. Most of the line is underground with a small portion near Yaominami Station being elevated. Currently, 6 car trains run on this line.

This line offers interchange to other Osaka Subway lines and also to Hankyu Senri Line, Hankai Uemachi Line etc. It takes around 50 minutes to complete a travel along this line.

Known as Osaka City Rapid Railway Line No. 3 or Rapid Electric Tramway Line No. 3, this line also runs parallel to Line 1 but has a track length of only 11.4 km. There are 11 stations on this line. All of the stations are underground. Each train on this line consists of 6 cars.

On the subway map, you can identify the line by its dark blue color and by the letter Y attached to it. From this line, one can transfer to Nankai Railway, Hanshin Railway and JR West and of course, to other lines of Osaka Subway system. It takes 20 minutes to travel on the complete track. 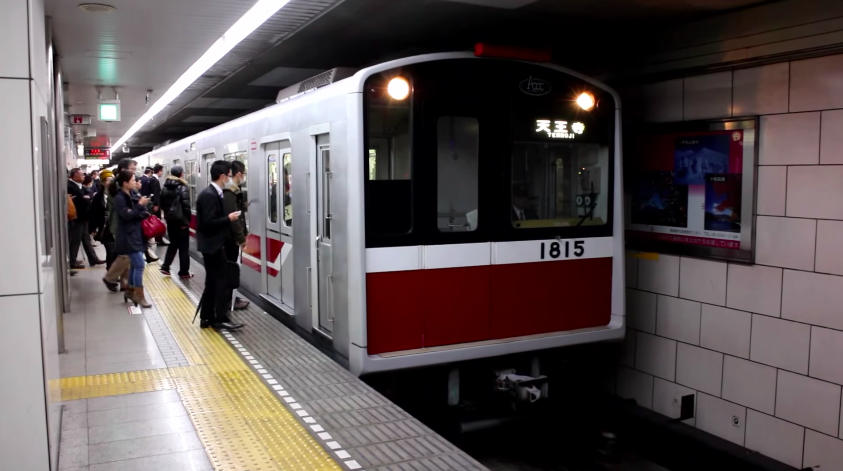 This is an east-west line running underground, following the route of Chūō Avenue. It is also known as Osaka City Rapid Railway Line No. 4 and Rapid Electric Tramway Line No. 4. On the subway map, it is indicated by green color and marked with the letter C.

The line has total 17.9 km of length, including 14 stations. After leaving the Awaza Station up to Ōsakakō Station, the stations are elevated. The rest of the stations are underground. Currently 6 car trains run on this line.

This is the only line that offers you transfer to all other lines under Osaka Municipal Transportation Bureau. A complete travel on this line takes around 30 minutes.

The line runs from the northwestern side of the city to the southwestern part through the business and recreational hub Namba. It is also called Osaka City Rapid Railway Line No. 5 and Rapid Electric Tramway Line No. 5. The line is indicated on the map by pink color and also by the letter S.

It has a 12.6 km long track through 14 stations. All the stations on this line have platform screen doors. It takes around 27 minutes to complete a travel along the line. Interchanges to other Osaka Subway lines and also to other railway systems of the city are possible from this line.

Also known as Osaka City Rapid Railway Line No. 6 or Rapid Electric Tramway Line No. 6, this line connects Tenjimbashisuji Rokuchōme to Tengachaya. It is shown as a brown colored line on the map, indicated by the letter K.

The length of the track is only 8.1 km but there are 10 stations on the line. Transfer option is almost similar with other Osaka Subway lines. A complete travel on this line takes around 17 minutes.

This line offers convenient transport to the events of Osaka Dome. It is also called Osaka City Rapid Railway Line No. 7 and Rapid Electric Tramway Line No. 7. It is the first linear motor metro line in Japan. On subway map, it appears with Green color and is marked with the letter N.

The length of the line is 15.0 km which is distributed among 17 stations. All the stations are underground. It allows transfer to other Subway lines and also to Osaka Loop Line and to Hanshin: Namba Line. To complete a travel on this line, you’ll need around 32 minutes.

It is a north-south line running in the eastern part of the city. It travels under multiple national routes and intersects other railway lines. Known as Osaka City Rapid Railway Line No. 8 or Rapid Electric Tramway Line No. 8, this line is 11.9 km long. There are 11 stations on this line. On the Subway map, it appears golden in color and is marked with the letter I.

Transfer possibilities from this line are much limited compared to other Osaka Municipal Sunway lines. To travel on the complete route, you need 23 minutes.

Also known as New Tram, this line is an automated people mover serving the Suminoe-ku province of Osaka city. It is a 7.9 km long line having 10 stations along it. On the map, it will appear light blue in color and is marked with the letter P. From this line transfer is possible to Chūō Line and Yotsubashi Line.

There are plans to extend 4 lines, namely, Sennichimae Line, Yotsubashi Line, Imazatosuji Line and Nagahori Tsurumi-ryokuchi Line further. In addition, a new line is going to be constructed between Suminoekōen and Kire-Uriwari. However, in view of the cost of construction, the government may choose to privatize the system or make it a light rail or bus service. 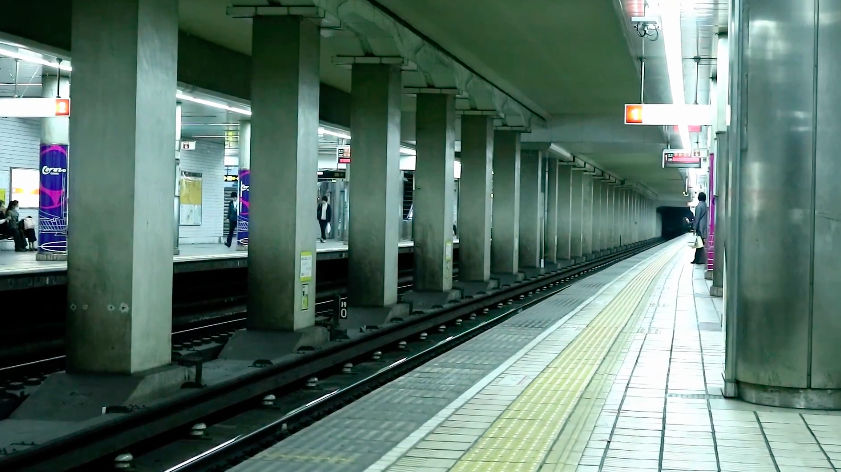 The fare in Osaka Municipal Subway system is determined on the basis of travel distance. Distances are represented by 5 different zones. An adult’s fare for single journey ranges between 180 Yen to 370 Yen. For children, the fare is almost half of the adult’s fare. Babies and two infants (1-5 years old) can ride with an adult guardian for free. For children between 6 to 11 years, child fare should be paid.

People with disability or rehabilitation certificate get 50% discount on the ticket fares. Besides the common single journey ticket, multiple types of tickets or cards are available that facilitate travel for locals and visitors. Some of such cards are Multiple Ride card, Enjoy Eco card, Osaka Visitors Ticket etc.

Get the details on fare and ticket from here.

To make your journey with Osaka Municipal Subway memorable, the Transportation Bureau offers the following services:

All passengers must abide the metro use rules set by the Osaka Municipal Transportation Bureau to ensure smooth functioning of the system.

Following tips may come handy while traveling through Osaka Subway: Map via www.kotsu.city.osaka.lg.jp
See map full resolution. It may take a little bit to load.