The Sendai Metro has two fully operational lines, the Namboku line and the Tozai line, which cover a total of 28.21 km. This rail system hours are between 5:30 am and midnight from Monday to Sunday. Its fares are calculated based upon the number of stations travelled, ranging from 200 yen to 360 yen. There are also many different kinds of cards for the metro. There’s even a direct connection to the airport!

Sendai is one of the most recognizable cities in Japan. During the year 1889, this city turned into the capital of the Miyagi District. Its total current population is over one million inhabitants.

Previously, this city was considered one of the most eco-friendly cities in Japan, since it was full of trees, plants, forests, and gardens. However, after World War II, most of the green spaces were destroyed due to bombings during aerial attacks.

Additionally, in 2011, Sendai suffered a strong earthquake of magnitude 9, followed by a devastating tsunami, both of which caused several damage and tragic losses. Nevertheless, Sendai has been able to recover from such unfortunate events, and nowadays it is the city with the strongest economy of the Tohoku region, and one of the most important tourist attractions in the country.

The Sendai Metro was created since it was strongly needed in the city during a time in which the city’s economic growth was in a favorable increase thanks to the development of the automotive industry.

During that time, many firms –most of which were located downtown- were in charge of manufacturing and selling a series of vehicles designed for other firms, and for taxi and bus lines.

This situation –which greatly helped in the development and the economic growth of the city- caused a high volume of traffic on Sendai’s streets. Besides the region’s increasing levels of traffic, there was also an increase in the number of buildings being constructed.

Because of this, during the year 1978, the Sendai District asked the land transportation council of the Ministry of Transport to build a rail system that would solve the city’s traffic problem. This request was approved in 1981. Right afterwards, the construction of the Sendai Metro began.

The construction was being handled by the Nippon Public Corporation of Railway Construction, and was inaugurated with only one line during the year 1987. This line was the Namboku line (the green line.) 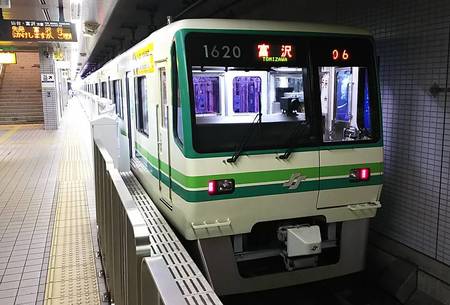 Currently, the Sendai Metro has two operational lines, covering a total of 28.21 km of distance.

These lines cover the busiest and most commercial regions of Sendai, such as the north and south of the city. These lines start at the Izumo-Chuo station and at the Yamiyaga station, where the famous Tohoku Zoo Park is located.

Likewise, both lines accept transfers from other transportation services, which make the access towards the different regions of the city even easier.

The Namboku Line was the first line to be inaugurated (1987,) and is also known as the green line. This line covers 14.38 km of length in approximately 28 minutes. It has 27 stations, most of which are located underground, which cover the regions between Izumo-Chuo, located at the north of the city, and Tomisawa, located at the south of the city.

The Tozai Line was inaugurated on December, 2015, with a total of 13 stations available for the public, which can be identified by the color blue. This route offers a 13.83 km trip in approximately 20 or 22 minutes, covering the regions that go from the southwestern part of the city to the southeastern part of the city, going entirely through downtown Sendai. This line has a station that connects with the Namboku Line, and another station that connects with the Railway of Japan.

The Sendai Metro is operation from Monday to Sunday, beginning at 5:30 am, and ending at midnight. However, on Fridays, the last train of the night departs 10 minutes later than usual. Likewise, passengers are always able to check the metro’s hours in any of the stations of the two lines, either at the customer service offices or at the timetables posted at the ticket vending machines. 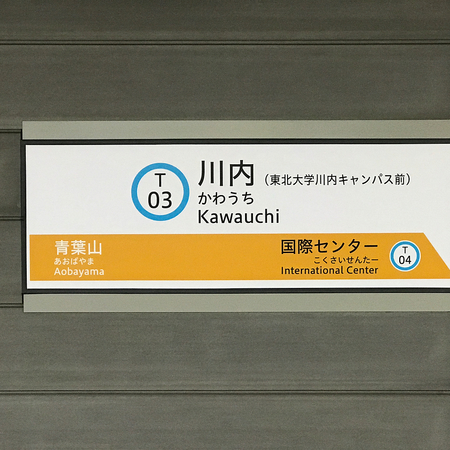 The Sendai Metro’s fares are classified in different sections, depending on the distance travelled (number of stations.) The lowest price for an adult is of 200 yen (1.76 USD.) Children under 10, as well as people with physical and/or mental disabilities only pay half of that price for a ticket.

The current fares are the following:

All of the tickets are acquired at the ticket vending machines. These machines show different kinds of tickets, including the Icsa Cards, one-day tickets, regular tickets, and passes.

Icsa: The Icsa cards are pre-paid cards that work for the Sendai Metro’s two lines, as well as the surface-level means of public transportation. These cards also work in the Railway of Japan. The Icsa cards have different prices, depending on the profile of the customer (for instance, if the user is an adult, a child, and the distance that they want to travel.)

One-Day Ticket: This ticket in only valid for 24 hours, regardless of the distance travelled. This is why this ticket is slightly more expensive than a regular ticket. It costs 840 yen (7.41 USD) for adults, while children only pay half of that amount.

Regular Ticket: The Regular Ticket is valid for a single ride –in other words, towards one station- on the Sendai Metro, and is also valid for bus systems that go towards downtown Japan and towards de Sendai Airport. Likewise, this ticket also allows you to make trips using the transportation of the firms Miyagi Traffic Bus and Sendai Municipal Bus. In all cases, this ticket only allows you one ride.

Sendai Whole Pass: It is a card that allows the user to ride the Sendai Metro whenever they please within a day, but, unlike the One-Day Ticket, this card also allows you rides on the bus systems linked to the metro. However, this card has limited use in Miyagi Traffic´s transportation services, since you cannot go through some routes within Miyagi Traffic if you use this card.

Skip Cards and Skip/Joy Cards: Both Skip Cards and Skip Joy Cards are prepaid cards that could be much more useful for a user that uses the Sendai Metro as their daily means of transportation. The passenger can save money since they do not have to buy a ticket every day. The user can get these cards at the ticket vending machines (located within the stations,) in customer service offices, as well as in ticket booths located in bus terminals. With both Skip cards the user can pay for a ride within the Miyagi bus line.

Since more and more cars are now driving through the national highway towards Izumi Chuo, there are plans to build a station that offers a metro ride to Izumi Chuo with a route similar to this highway. This way, traffic will slightly decrease on this highway.

In regards of the Tozai Line, given the number of schools, universities and other educational institutes being built throughout its route, without even including the number of residential buildings that have been constructed, a plan has been made to make some modifications in many of its stations to benefit its passengers even more.

For instance, the Yagiyama Zoo Park station has a private parking system called Park and Ride, which offers its services so that passengers can travel from their homes to the stations, as well as allowing them to go from the stations to the closest bus stop.

Tips to use the metro 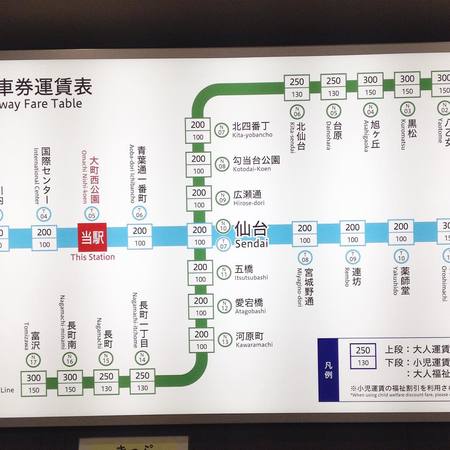 Connection to the airport.

Fortunately, the Sendai Metro has a connection with the Sendai Airport, which greatly helps its passengers to reach the airport.

The user can board the train in any of the Namboku line (green line) stations, but they need to make sure to disembark at Sendai station, since, from this station, they need to transfer to the access line of the airport. The journey through this route lasts approximately 17 minutes, ending at Natori station, which is located within the Sendai Airport facilities. Likewise, the passenger that just got off the plane and wishes to go to the city could use this route, so that they do not need to exit the airport´s facilities.

The Nagachami station, which also belongs to the Namboku Line, is also a transfer stop towards the Sendai Airport. So, if you are closer to this station rather than the Sendai Station, you could board the train there without any problem.

The Aoba Castle is the representation of a rather important historic symbol for Japan. This castle was built with the purpose of protecting the brave soldiers that protected the city of Sendai.

It is located at the top of Mount Aoba, and is over 400 years old. Due to the battles that took place during World War II, most of its structure got damaged. This is why, in 1970, the government decided to rebuild it. However, there are parts of the castle that survived the war that remain intact.

Even though the castle has been almost entirely rebuilt, some old furniture and architecture were kept, such as walls, stone sculptures, etc. Nowadays, this castle is a park that is open to the public with a free entrance, offering beautiful views of the city and the Pacific Ocean. 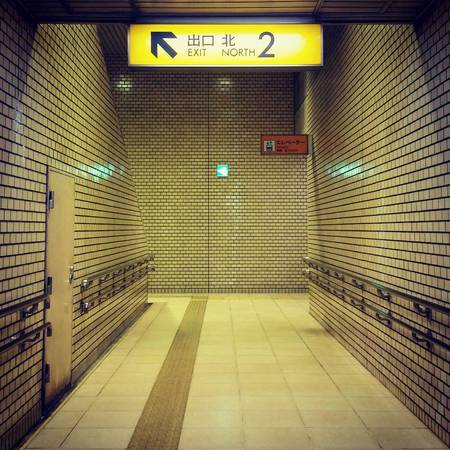 How to reach Aoba Castle by using the metro?

The Osaki Hachimangu shrine is one of the most visited touristic attractions due to its importance for the inhabitants of the city and its incredible architectonic beauty. It was declared “National Treasure” because it was the only building constructed during the Azuchi-Momoyama era. Without a doubt, it is a place that any tourist should visit, not only because of its beauty and luxurious architecture, which is lacquered in black and has golden shapes and colorful adornments, but also because of its embedded history.

In it, great historical figures are honored, including the emperors Ojin and Chuai, as well as empress Jingu. The inhabitants of Sendai hold the belief that these emblematic figures protect them from harm, help them to achieve great accomplishments, and help pregnant women to give birth successfully. Entrance to the shrine is completely free.

Another option is to make a transfer from this station to the Senzan Line railway, which goes through the Tohokufukushidai-Mae station, and reaches the Osaki Hachiman Shrine station, which is located near the Shrine.