It has been just a little over 2 decades since the Guangzhou Metro’s transformation into one of the world’s longest systems, while plans for expansion continue to grow. Guangzhou Metro extends 391 kilometers (243 miles). There are 232 stations and 13 lines. The operating schedule is from Monday to Sunday from 6:00 a.m. to 12:00 a.m. The Guangzhou Metro fare system is based on the distance traveled. The shortest trips begin at a rate of 2 ¥ (2 yuan). The Guangzhou Metro has a direct connection to the Canton-Baiyun International Airport, via Line 3.

Guangzhou, also known as Canton, is a supercity, located in southern China. 13 million people reside in the metropolis area. This is a figure that rises to 46 million, when counting the city’s neighboring municipalities, whose residents typically work in Guangzhou.

Many consider this to be the world’s most extensive urban agglomeration. It is additionally positioned as a major business center, strengthened by its strategic proximity to the Hong Kong port.

Although the twentieth century was Guangzhou’s greatest period, it continued to transform into the most important seaport in the People’s Republic of China. Shanghai and Hong Kong would later claim this position, but Guangzhou continues to be extremely important to the country’s economy, not to mention that it is also considered a global city.

Its stunning building projects have earned it great recognition, of which one of the most striking is the Guangzhou Metro system.

The work was primarily conceived with hesitation, during the 60s. Nothing was concrete. There were attempts by various public administrators, but none proved capable of initiating construction work. It wasn’t until the 90s, following 6 failed attempts, that true metro construction began. Extending just 5.7 kilometers (3.5 miles), line 1 opened on June 28, 1997.

Since then, the expansion has been simply spectacular. Just over twenty years later, the metro now boasts 391 kilometers (243 miles), and services 233 stations located across 13 lines.

Just over two decades later, this subway has taken its place as one of the world’s longest metro networks; and plans for expansion continue to grow. 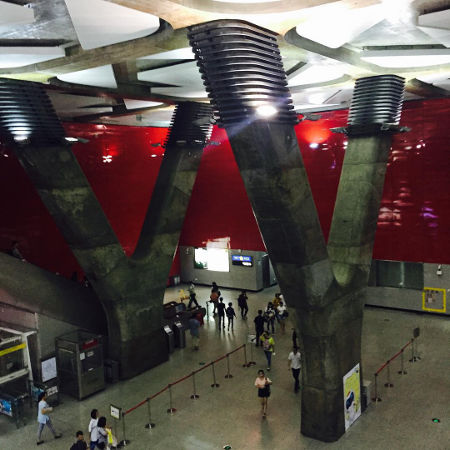 The Guangzhou Metro has 13 commercial lines and a total of 232 stations. These lines are responsible for connecting the entire city, in addition to several neighboring municipalities.

Initially, the metro just provided residents with transportation from the metropolis to the city center. This changed rapidly, however, and most neighborhoods are now connected by the metro as well.

Line 1 is 18.5 kilometers (11.5 miles). Its route extends from the Xilang district to the Guangzhou East Railway station. Each stop is underground, with the exception of the surface level stations, Xilang and Kengkou. Service began on Line 1 in 1997, making this China’s fourth metro system. The color, yellow distinguishes this line on station maps.

Guangzhou Metro’s line 2 extends 31.4 kilometers (19.5 miles) and has 24 stations. Its route runs north to south, from Jiahewanggang district to the Guangzhou South Railway station. This route is completely underground, and the line is easily identified by its distinct blue color.

Line 3 is one of the system’s longest lines. The route is 67.3 kilometers (4.8 miles) and there are 30 stations. In fact, this is the longest underground tunnel in the world. The route begins at Panyu Square and ends at the Tianhe Bus Terminal. Orange is its distinguishing color.

There are 16 stations along line 4’s 43.7-kilometer (27.2-mile) route. The route runs parallel to line 3, in the city’s north-south section. It provides service from the Nansha Passenger Port to the north, to Huangcun station. Part of the route is elevated – from Jinzhou to Xinzao--, while the other part, from Xinzao to Huangcun is underground. Green is this line’s distinguishing color.

Line 5 is 31.9 kilometers (19.8 miles). It provides service to 24 stations. Its route begins in the Liwan district and ends in the Huangpu district. Red is its distinguishing color. It began operating in 2009. This is the only line to transport half a million passengers daily.

Like line 5, line 6’s route also begins in the Liwan district and ends in the Huangpu district. It runs parallel with the latter, although it is longer. It extends 41.9 kilometers (26 miles) and has 32 stations. The line crosses several of the city’s more densely populated districts and can be identified on station maps by the color, brown.

Line 7 provides service to Guangzhou’s municipalities and its neighboring Foshan, as it travels through the districts of Shunde, Panyu and Huangpu. The route extends 18.6 kilometers (11.6 miles), has 15 stations and serves a densely populated area of the city. It was built in order to avoid the bottlenecks in the central stations. This line is identified by the color, green.

Guangzhou Metro’s line 8 is notable for its L-shape. It provides service to northeastern Guangzhou, from the Fenghuang Xincun district to Wanshengwei. The route is 14.8 kilometers (9.2 miles) and there are 13 stations. Each one is underground. This line is easily identified on station maps by the color, turquoise.

With a recent opening in 2017, Line 9 is one of the system’s newest lines. 11 stations are connected along its 20.1-kilometer (12.5-mile) route. It mainly travels through the Huadu district, though it also passes through the Fei'eling and Gaozeng districts. Light green is its distinguishing color.

Like the preceding line, line 13 opened in December 2017. Its route runs from east to west and includes important meeting points such as the Luochongwai Bus Terminal and the financial districts of Zhujiang New Town and Yuancun. This is an express route; in which vehicles travel at an average speed of 100 km/h (62.1 mi/h). 11 stations extend along its 25.6 kilometers (15.9 miles) and it can be identified by the color, army green.

Line 14 is a suburban route. Its primary purpose is to promote urban development in the neighboring municipalities, northeast of Guangzhou. The trains, manufactured for this route, travel 120 km/h (74.6 mi/h), connecting the residents of Jiahewanggang to the city center in just 1 hour. There are 10 stations along this line’s 21 kilometers (13 miles) and dark brown is its distinguishing color.

The APM (Automated People Mover System) line operates in Guangzhou’s financial center, in the Zhujiang New Town district. Its length is just 3.9 kilometers (2.4 miles). It has 2 stations and can be identified on station maps by the color, sky blue. It also has the distinction of being completely automated.

The Guangfo line, formerly named the Guangzhou-Foshan Railway, is the route that connects the Foshan and Guangzhou municipalities via a route extending 32.2 kilometers (20 miles). It has 21 stations – 10 in Guangzhou and 11 in Foshan and florescent green is its distinguishing color. 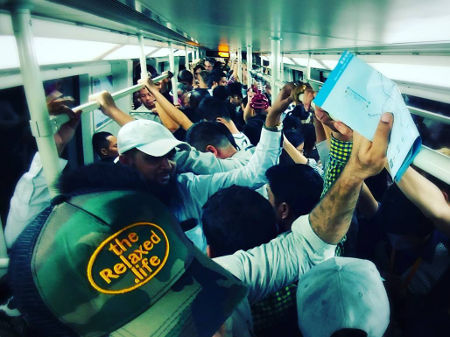 Jiahewanggang Station: Connects to Lines 2 and 3.

The Guangzhou Metro schedule is extremely convenient for the daily use of its riders.

Although the metro does not offer 24-hour service (which could become necessary, considering the massive size of the metropolis), service begins very early, at 6:00 a.m. Trains run continuously until 12:00 a.m., from Monday to Sunday.

On weekends, trains arrive every 3 minutes throughout the day.

The Guangzhou Metro’s fare system is based on the number of kilometers traveled. Fares begin at 2 ¥ for the shortest trips, which include just a couple of stations, while the longest trips reach up to 17 ¥.

However, there are a variety of payment options available, with the goal of meeting every rider’s needs. They include the following:

The Guangzhou Metro is perfectly connected to the Cantón-Baiyun International Airport, via line 3.

To reach the facility from the city center, one must simply take the metro south to Airport South (机场南) station. This route, available from one of the stops in the Tianhe district, usually takes no longer than 50 minutes. Arrival is convenient since trains disembark within the air terminal. Similarly, one can get off at Airport North (机场北) station, which is located in terminal 2 of the airport.

Although the metro is the quickest and least expensive option to travel from Cantón-Baiyun International Airport to Guangzhou’s city center, one should consider the limitation to transporting luggage within the system.

A taxi, from one of the many lines outside the terminal, should be used when traveling with an excessive amount of baggage. It is also best to keep in mind that most citizens of this metropolis only speak Mandarin Chinese. English, alone, will not be useful for getting around the city.

As a major city, Guangzhou offers a variety of leisure activities to its residents, such as shows from its breathtaking Canton Tower. The tower is located at Canton Tower station’s surface level, on line 3.

Composed of steel and concrete and 600 meters (1968.5 feet) high, this tower is a modern marvel. Its interior is home to numerous recreational spaces, including a wax museum on the first level, jewelry stores, souvenir shops and every class of restaurant. The revolving restaurant is the most striking. Its near 500-meter (1640-feet) height provides a view of the city’s treasures.

The Chimelong Safari Park zoo is another Guangzhou landmark. Located near Dashi station on line 3, this facility houses around 20,000 animals from 500 different species – with pandas being the most popular-. This space is famous for the high-quality care that the animals receive, with many of them roaming freely.

Visitors can walk or drive their personal vehicles through the Chimelong Safari Park. It is the first zoo in China to allow drivers to take a self-driven tour. They can view the daily performances and take part in a variety of activities that are constantly being updated.