Chengdu metro is the rapid transit system serving the Chengdu city in Western China. It is the first metro system in western China and seventh in the whole nation. For the first time in China, a city government and Ministry of Railways came into a collaboration to run a metro system. It has three main parts: the metro lines, the city railways and a light rail train. The metro lines and city commuting train lines are already operational; the light rail line is expected to start operation from 2017.

Chengdu is the capital and the business hub of Sichuan Province in China. It is at present home to more than 10 million people. Being the 10th largest city in the nation, Chengdu has always experienced pollution and traffic congestion problems. As a result, a metro system was highly desirable in the city.

Chengdu metro was conceived in 1985 but it took another 7 years to complete the paperwork. After another 12 years, the metro operators came into the scene.

The trains run from 6 AM to 11 PM. However, the hours of operation may slightly vary from one line to another. Trains come every 5- 6 minutes. This frequency is reduced during the off-peak hours and also during weekends. 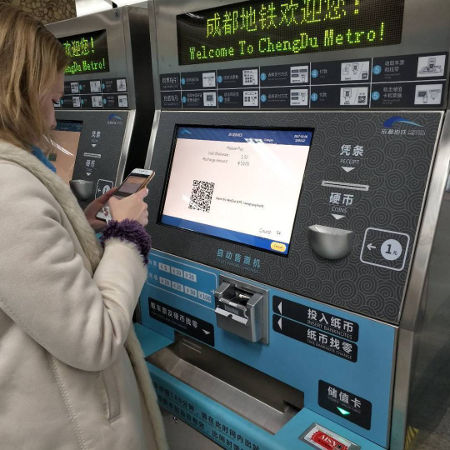 This is a north-south line connecting Shengxian Lake to Guangdu. In the north, the line starts near North Chengdu Railway Station and in the south ends near South Chengdu Railway Station. It is the first line of Chengdu metro that started revenue operation. This is again the first metro line in the mainland China to use natural and square ventilation system for energy efficiency. On the map, it is indicated with blue color.

The track is 18.5 km long running through 17 stations. It covers multiple tourist spots and business centers including Wenshu Fun, Wenshu Monastery, Nijiaqiao etc. Transfers from this line to other Chengdu metro lines and also to China Railway High-Speed are possible.

Line 2 runs from the northwest corner to the southeast corner of the city. It starts from Xipu Station in the Pi County and ends at Longquanyi Station in Longquanyi district. It connects important spots like University of TCM (Provincial People's Hospital), Chadianzi Bus Station and East Railway Station. On the map, it appears orange in color.

The track is 44 km long having 32 stations along it. From Line 2, passengers can interchange to other operational Chengdu metro lines and also to Chengguan Line and China Railway High-Speed line. A whole journey on this line takes around 65 minutes.

It is an east-west line connecting Intangible Cultural Heritage Park to Wannianchang. It covers major spots e.g. Jinsha Site Museum, Chengdu Culture Park, Wide and Narrow Alleys etc. The complete line is 22.4 km long having 16 stations along it. On the Chengdu metro map, it appears green in color.

Transfers from this line to Line 1 and 2 are possible at Luomashi Station and Chengdu University of TCM & Sichuan Provincial People’s Hospital Station respectively. When all the other lines of the metro system will open, more transfers will be possible from this line. A full journey on this line takes around 33 minutes.

Another 7 lines are planned to complete a network of 10 metro lines by 2035. Line 1, when complete will have 31.6 km track length connecting 23 underground, elevated and ground level stations. Construction of Line 7 should start by 2017. Work on Line 10, Phase 1 should also start in the same year. Work on Line 5 is expected to begin in 2019.

A passenger can buy either single journey ticket or use Chengdu Transportation Smart Card. With the later, he/she is entitled to a 10% discount on the metro fare. However, it does not include transfers. The metro authority is soon going to introduce different types of passes for traveling through the different lines.

Following facilities add an extra layer to your riding joy:

To ensure hassle free journey for you and your co-passengers, follow these rules:

Following tips may prove handy while using the Chengdu metro: Map via www.cdmetro.cn
See map full resolution. It may take a little bit to load.