Changchun is the capital city of China’s Jilin province. It is one of the major hubs of mainland China and home to more than 6 million people. The city is the major center for automotive business in the nation. It was also the venue for Asian Winter Games in 2007. A rapid transit system was necessary to manage city’s traffic pressure. As a result, in 1939, the Changchun Rail Transit system was conceived to serve city’s residents and visitors alike.

When Changchun light rail system started revenue service, other Chinese cities were only discussing the possibilities. Line 3 was brought into service on Oct. 10, 2002. At that time only the portion between Changchun Railway Station and Weiguangjieand Station was operational. On Dec 26, 2006, it was further extended to Changyingshijicheng. Line 4 is operating since June 30, 2006, between Chechang and Dongdaqiao. On May 7, 2012, Line 4 was further extended to Changchun Railway Station North.

The subway system is open from 6:00 AM till 10:00 PM. A slight variation in this timing can be observed depending upon the particular line. On peak hours, one train comes every 4 minutes. At other times, every 8 minutes.

The light rail system currently consists of two lines: line 3 and line 4. Both lines form a loop-like structure and intersect at Changchun Railway Station. However, an interchange between the lines is not possible here.

In the south side, the two lines meet to generate an interchange possibility. This transfer takes place at Linhejie Station on Line 3 and at Weixinglu Station on Line 4. The two stations are connected by a 200 m long passage. Despite having two different names, these are actually the same station.

Some of the 49 stations are elevated, some are at ground level and others are underground. 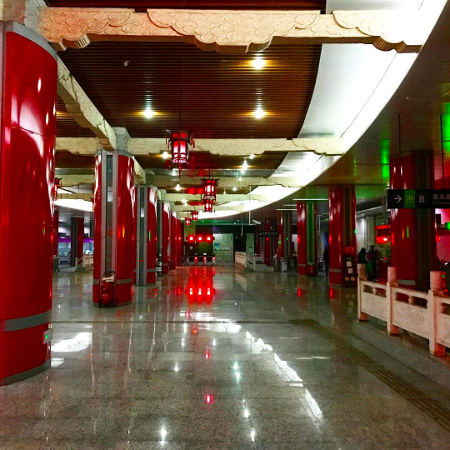 The complete journey on this line takes 65 minutes. The stations are at ground level or elevated. Single articulated trains run on this line.

Line 4 is at present partly operational between Changchun Railway Station North and Chechang Station. It passes through 16 stations along a 16.3 km long track. It also connects several important pockets of the city including the Museum of Imperial Palace of Manchu State.

A complete journey on this line takes a little more than half an hour. Some of the stations on this line are underground; some are elevated. Trains on this line have two coupled sections and two middle sections.

Line 3 is planned to be extended from Changchun Station to Yongning Lu Station. Once extended, there will be another transfer possible to Line 4 at Museum of Imperial Palace of Manchu State.

Line 4 will be further extended to have total 45 km of track length along 33 stations. There is a plan to construct 19 light rail lines totaling a track length of 527 km. Line 1 and Line 2 are now being constructed. Constructions of Line 5,6,7,8,9,10 are also going to start soon.

Following are some of the many facilities that the Changchun Rail Transit Corporation offers to ensure hassle-free journey for every rider:

In the interest of smooth running of the system, passengers are requested to abide the following rules:

To get the best experience of Changchun subway, keep the following points in mind: