The Straßenbahn arrived at Gelsenkirchen on the year 1895. The regular fare to access the metro is 1.60 euros (1.88 USD,) which covers a short journey of less than three stations. The system’s fares are calculated depending on the distance travelled. The business hours are from 3:30 or 4:00 in the morning until 11:00 at night or 1:00 in the morning of the following day.

Metros in Germany: The Gelsenkirchen Metro

Gelsenkirchen is a city located in the state of Rhineland from North Rhine-Westphalia from the Federal Republic of Germany, in the region of the Ruhr River. Since approximately 1150, there is a record of the existence of this urban settlement, but it was not until the advent of the Industrial Revolution when the city underwent a rapid growth. Among other motives, this growth occurred because of its commercial harbor on the Ruhr River and the development of the extraction of coal in the city.

Currently, there are a little over 250 thousand people in this city. After the coal industry closed down, the city suffered a high unemployment rate. However, the city has been recovering from it, ranking as an eco-friendly city that is open to tourism.

The Gelsenkirchen Metro travels a total of 84 kilometers, if the journey from both the Bochum and Gelsenkirchen Straßenbahn are combined. Since this system has more tramway-like features, most of its trains are similar to tramways. Since the 70s, the trains M6S and M6C began to be used. However, most of them have been discarded. They were replaced by the NF6D (MGT6D) in the 90s.

The biggest renovation took place during recent years, with the coming of the Variobahn trains of the models 501-530, 531-545, and 101-142. The tramway-like network was modernized to be adapted to these trains. The Bochum and Gelsenkirchen Straßenbahn systems are operated by BOGESTRA (Bochum-Gelsenkirchener Straßenbahn AG,) with the exception of line 107, which is operated by EVAG.

The transportation systems in Germany are very old, and this was one of the first countries to widely develop its railway networks. With the passing of time, Germany started to adapt its long-distance railway networks to the internal city networks. Gelsenkirchen was not the exception, and the entire region of Rhine Ruhr developed its urban train system during the end of the 19th century. The Bochum and Gelsenkirchen tramway network started to develop during the last decade of the 19th century. The Bochum network was inaugurated on November 23rd, 1894, with a length of 6.9 kilometers. In the following year, on November 3rd, the Gelsenkirchen Metro was opened during its first phase, which has a length of 3.4 kilometers.

Up until 1905, the system grew quite rapidly, and more stations were being built until the constructions were completely stopped during World War I. The new big expansion was done during the 50s and 60s. And, from here, the modernization of the old system began with the incorporation of a new automotive park and the conversion of roads to railways. During the 21st century, the modernization has been focused to replace the tramway lines for light railway lines. No railway that goes through downtown Bochum has the aforementioned features.

It is one of the biggest lines, and it is not operated by the BOGESTRA, but by EVAG during most days, except for Saturday mornings. However, there are 11 stations that operate under BOGESTRA. In total, the line has 34 stations. Its terminals are the main train station in the city, Gelsenkirchen Hbf, and Bredney, which stops by the train station of the city of Essen. Its route goes through Feldmark, Trabrennbahn, Essen-Katernberg, and Zeche Zollverein. The main type of trains used in this line are the M8D-NF2 class.

The region of Ruhr was the European capital of Culture on 2010, and the line 107 was called Kulturlinie, or Culture Line, due to the number of historical and cultural sites of touristic interest in which its trains transit.

It is the only line that only transits within the city of Gelsenkirchen, and has an annual ridership of over 7.4 million passengers. It has a total 34 stations. This line also begins at the Gelsenkirchen Hbf train station, and begins its journey through 7 subway stations, until it reaches the surface. From here, the line has been expanded to have bigger side platforms. This expansion makes these platforms to occupy some space previously used as streets, so some roads are shared between the metro and the pedestrian crossings in the case of trains that make short journeys.

Since it uses a voltage of 700 volts, only some specific trains can be used, such as the M6S, and the new trains of the Variobahn series. Its journey starts at Gelsenkirchen Hbf, continues through Bismarck and Buer, and ends at Horst.

The underground journey is done on the central part. At surface-level, the trains travel from Musiktheater to Buer Rathaus. This line had the benefit of getting an important expansion after the 2006 Soccer World Cup.

Just like in the rest of the German territory, there is a well-established system of surface-level suburban railway transportation, which is called the S-Bahn in all of the country. Through the S-Bahn, the downtown area of the cities are connected with the surrounding areas, or to be more specific, to the inhabited suburbs near the cities. Generally, the S-Bahn are completely integrated with the U-Bahn and Straßenbahn services, especially in regards with the fare system. 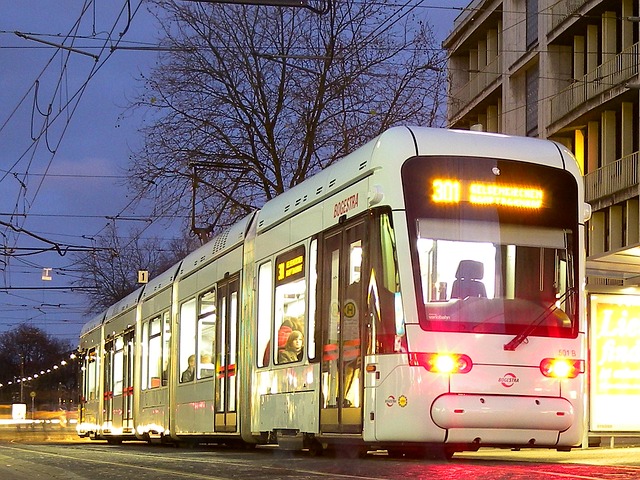 The bus transportation system is completely integrated with the Straßenbahn, therefore, with the acquisition of any ticket, you can also have access to the buses, which are managed by the same operator. Between Bochum and Gelsenkirchen, there are 68 bus lines, which work entirely within the same structure. Within the system, there are also nocturnal bus routes.

The Bahnhof Dusseldorf Flughafen station is located within the Dusseldorf airport, and it is a big center of connections for medium and long-distance trains. This station also has a S1 station from the S-Bahn. Through this line, a connection can be done to Duisburg with the S2 line, and, this way, you can reach Gelsenkirchen Hbf, which is the main Straßenbahn station. To reach the city, you can also board long-distance trains and, later, board the metro.

The business hours vary according to the Straßenbahn line from Gelsenkirchen and Bochum, but they start approximately at 4:00 in the morning, and end after midnight.

For line 107, the first train starts service at 4:28 in the morning, while the last train departs at 11:21 at night. The train frequency for this line is the slowest in the entire system due to its tramway-like features, reaching a frequency of 20 minutes between each train each day.

For line 301, operations begin a little afterwards, beginning at 3:58 in the morning with the departure of the first of its trains. In contrast, the last train departs the latest in the whole Straßenbahn system, departing at 1:08 in the morning of the following day. The departure frequency is rather quick on this line compared to others, since it is of approximately 10 minutes between each train.

Line 302 starts service at 3:55 in the morning, when the first train departs the terminal station. Meanwhile, the last train departs after midnight, at 12:15 am of the following day. Its frequency is the same as in line 301, or in other words, each train arrives to the platforms each 10 minutes.

The fare system from the Gelsenkirchen and Bochum Straßenbahn is quite complex, and it depends of the distance travelled during the journey. The first thing that you need to understand is that there are four fare zones: A, B, C, and D.

Finally, there is a pass for unlimited rides for 7 days. The prices for this ticket are the following:

Another payment option is the use of monthly cards. Generally speaking, there are two types of monthly cards: the cards that start working since the first day of the month and end at the last day of that month, and the cards that work for 30 days since the moment that you purchase the card. These monthly passes also allow the users the option to choose an additional benefit, such as being able to carry dogs, luggage, or bring children, which has an additional cost on the card. Also, there are tickets for different times of the day, since there are tickets that work at any time of the day, while other tickets only work after 9:00 in the morning.

The age of the user also has an important influence on the tickets’ fares, since there are cards for young people, students of different levels, senior citizens, among others.

To board any system of public transportation, even in a country such as Germany, it is always important to take some precautions:

Part of the metro system has tramway-like structure. However, during recent years, the busiest lines have been modernized to become a light railway-like system.

The railroad’s gauge size is of 1000 mm, which makes it different to most systems of this kind, which use a standard gauge size of 1,435 mm.

The system guarantees that the trains will arrive promptly, so, if a train lasts longer than 10 minutes to arrive than what is scheduled, the user will be able to ask for a refund for their ticket.

Advertising within the system is a very effective sales technique, but it requires a minimum fee of 510 euros (599.11 USD.)

Gelsenkirchen, just like the entire region of Rhine-Ruhr, was mainly a coal-centric industrial park, manufacturing multiple coal-related goods. However, during recent years, the city, as well as Germany as a whole, has shifted towards a state-of-the-art eco-friendly industry. Also, the region of Rhine-Ruhr was chosen as the European Capital of Culture in 2010. For these reasons, the number of tourists has exponentially increased in this region, especially in Gelsenkirchen.

Some of the places that can be seen from the Gelsenkirchen Metro are the following: 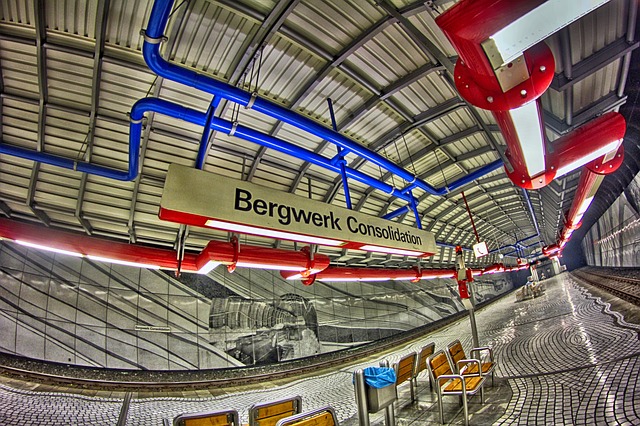 Musiktheater im Revier: it is a German cultural monument that was inaugurated on 1959, and it is considered a landmark in the city with regards of music. It officially hosts operas and all kinds of concerts, as well as classical dance. The building is also a great architectonic attraction, designed by the architect Werner Ruhnau. Also, the building is decorated with sculptures from Robert Adams and Norbert Kricke. To reach it, you can disembark at Musiktheater station from line 301.

Hans-Sachs-Haus: It is one of the administrative centers of the city of Gelsenkirchen, which was built between 1924 and 1927, and was designed by the architect Alfred Fischer. This building, which was initially planned to be a hotel with restaurants and a mall, is striking due to its architectural design, since it has a rather modern design. To visit and enjoy it, it is necessary to get off from Heinrich-König-Platz station from lines 107 and 302, and then walk a block.

Revierpark Nienhausen: It is the most distinctive park in the city of Gelsenkirchen because it has a vast area of 30 hectares. Within this park, there is a building in which there are spas, massage centers, an open-air pool, a conference center and a physiotherapy center are available. This makes it an ideal place for any person that wants relaxation or rehabilitation. It has an approximate of 250 thousand annual visitors. To reach it, it is required to get off at the station of the same name from line 107.

Trabrennbahn Gelsenkirchen: it is one of the most distinguishable harness racing stadiums in the region. It was founded on 1912, and has a capacity of 30 thousand spectators. It is visited by a lot of people from all of the region of Rhine-Ruhr, as well as the adjacent regions. It is very easy to reach it, since you will only have to disembark at the station of the same name from line 107.