The Munich Metro has a total of 96 stations and 8 lines that transport 1.3 million passengers daily. It is 103 kilometers (65 miles) long.

There is no direct connection between the Munich Metro and the Franz Josef Strauss International Airport, but a connection is available from the S-Bahn.

Among outsiders, Munich is undoubtedly one of Germany’s most renowned cities. Over time, it has come to be Europe’s major center for culture, finance, economics, technology, tourism and innovation. Studies show that these characteristics along with its extremely high standard of living make it one of the best places to live.

The city is home to 1.5 million people, a number that grows exponentially to 6 million residents, when factoring in the total metropolitan area. In terms of population, it is the third largest German city and the twelfth largest city in Europe.

Following the end of the Second World War, it was meticulously reconstructed, with an emphasis on the community’s future needs, such as large streets and robust public transportation systems.

Therefore, it was as early as 1953 when local authorities began to lay out the need for a subway system (a metro) that would serve the entire city center. However, it wasn’t until 1967, with the knowledge that Munich would be hosting the 1972 Olympic Games, when construction work and vehicle testing began.

With this news, construction of the Munich Metro became a priority over other works proposed by the German State of Bavaria (to which Munich belongs). As a result, the metro, known locally as the U-Bahn, opened its first commercial route in 1971. This was the U6 Line, which extended 12 kilometers (7.46 miles).

The Munich Metro continued to expand from this point, reaching 103 kilometers (64 miles), 96 stations and 8 lines in total. The system transports 1.3 million passengers daily. 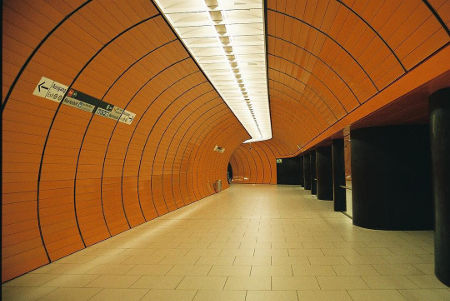 The Munich Metro has 3 routes served by 8 commercial lines. Collectively, there are 103.1 kilometers (64 miles) divided among 96 stations between which 576 trains currently run. Included below are the metro lines:

The line is 12.2 kilometers (7.6 miles) and includes 15 stations. It has been providing service since October 1980, which is also when the second route opened and began providing commercial service.

Line U3 includes 25 stations extending across 21.2 kilometers (13.2 miles). It has been operating since 1971 and travels along metro Route 1. 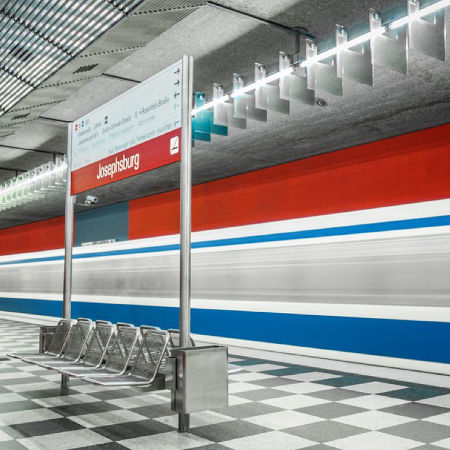 Line U7 serves 17 stations, but with the distinction of only operating during peak hours, in which it provides support to Lines U1 and U2 on Route 2.

This line only operates on Saturday afternoons and provides service to 9 stations on lines U2 and U3.

The Munich Metro’s nearly 100 stations are extremely well connected to its other transportation systems. Riders can tranfer to the bus, tram and the Munich commuter rail, known as the S-Bahn.

Some system connections are featured below: 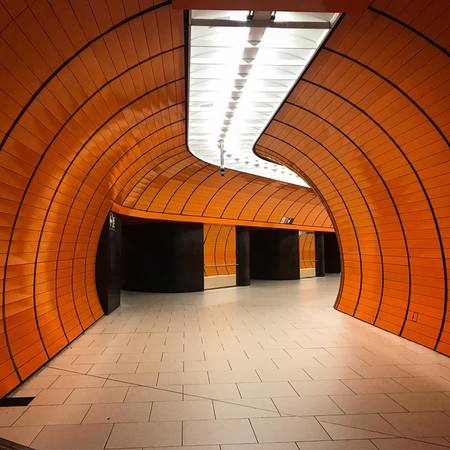 The Munich Metro’s nearly 24 hours of operation offer an extremely generous schedule to its riders. Its 21 continuous hours of service run from 4:00 a.m. to 1:00 a.m.

The hours are extended to 2:00 a.m. on Saturdays and Sundays, while service still begins at 4:00 a.m.

Benefiting from heightened demand, the metro provides 24-hour service on special occasions such as Christmas Eve, New Year’s Eve, Carnival and other holidays.

Trains generally run every ten minutes throughout the day. During peak hours, however, and thanks to the support provided by other transportation systems, the wait time is reduced to just 5 minutes.

The Munich Metro’s fare system is divided into zones, which correspond to the total fare each passenger pays. There is a total of four zones from the city center to the outlying areas. The zones are, in turn, divided into 4 rings, making up a total of 16. The subway maps display the zones, so passengers may either confirm which ones they need at the station or on the metro’s web page.

Once the number of zones and rings is determined, one can purchase a traditional ticket, common to most metro systems, or a reloadable IsarCard for frequent trips. As noted, the cost corresponds to the traveler’s chosen route.

An overview of the Munich Metro’s prices is included below:

Ideal for occasional users, the single ticket includes just one trip. It is valid for 1 hour for “Short Trips”, 3 hours for “1 Zone” and 4 hours for “2 Zones, and so on. 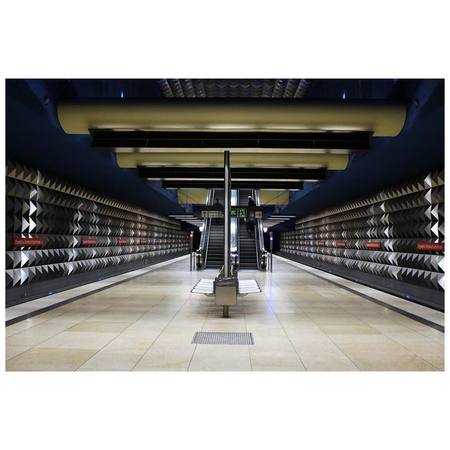 This option is for riders who need to complete several daily metro trips. It includes a group of stripes and provides a better value than the Single Tickets. 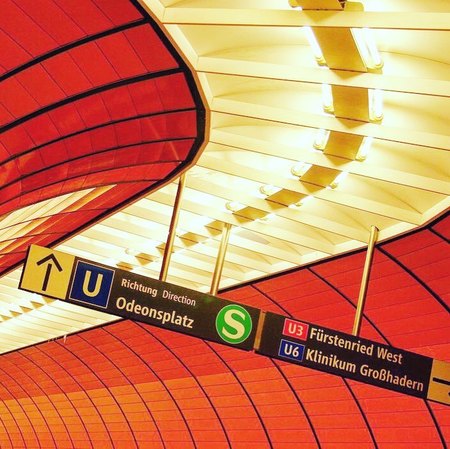 This weekly payment plan is only available to riders with an IsarCard, which can be refilled at metro ticket machines or ticket offices. Unlike the Single Ticket and Stripe Ticket, the fares for this payment plan do not correspond to the number of zones traveled, but rather to the number of “rings” traveled per week.

This monthly payment plan is only available to riders with the IsarCard. The card is reloadable and available at Munich Metro ticket machines and ticket offices. Unlike the Single Ticket and the Stripe Ticket, the fares for this payment plan do not correspond to the number of zones but rather the number of rings that the rider travels in a month. 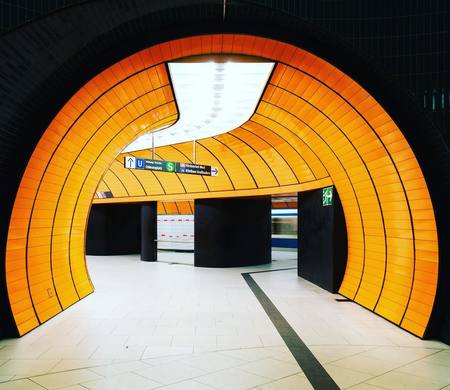 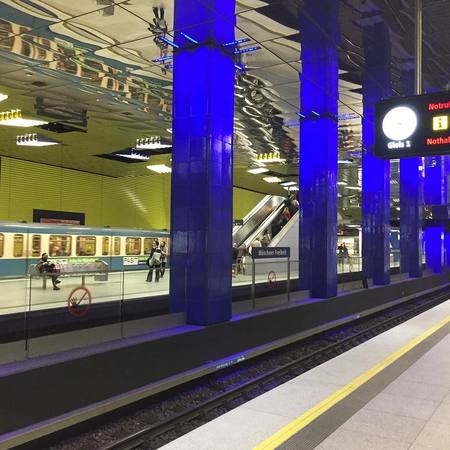 The Munich Metro does not have a direct connection to the Franz Josef Strauss International Airport, located 28 kilometers (17.4 miles) northeast of the city. However, it is possible to reach the airport terminal via the S-Bahn (the Munich commuter rail), which is also interconnected to the U-Bahn subway (metro) system.

The S-Bahn routes S1 and S8 travel in the direction of the airport and are accessible via metro stations, Hauptbahnhof, Karlsplatz and Ostbahnhof. The typical trip duration is about 40 minutes and the cost is €9.00 ($US 10.20).

There is also an “Airport-City-Day-Ticket” that permits full day access to all Munich Metro lines, trams, and buses at a cost of just €13.00 ($US 14.73) The ticket is available for purchase at the S-Bahn station neighboring the airport and some other stations on the S1, S2 and S8 lines. (details included on metro website)

There are plans to expand almost every one of the Munich Metro lines as ridership is expected to grow and serve new communities. Two examples are an extension to the de Hasenbergl Nord suburb on Line U1 and one towards Martinsried on Line U6. However, the most essential project, due to its size, will be the opening of the U9 line which will consist of the Martinsried – Implerstraße – Central Station – Giselastraße – Garching-Forschungszentrum route.

Service, on this line, is expected to begin in 2025 and according to official estimates, it is expected to transport 10 million passengers. Construction plans were introduced in 2014 and the cost will be between 250 – 350 million euros. An additional project, to support the current lines, will include the construction of Lines U10, U11, U12 and U26.