The Bielefeld Stadtbahn is the urban transportation system that services the German city of the same name. The term Stadtbahn can be translated as "light rail", and is one of the systems that predominate in German medium-sized cities. As of today, the subway of the city of Bielefeld has four operating lines that are 33.1 kilometres in longitude. There are 64 stations in the system.

The system is of recent creation, since its inauguration dates back to 1991, when the old tramway system was adapted to become the current Stadtbahn. The fee for a single ticket to the Bielefeld Stadtbahn for 90 minutes is €1.60 (US$ 1.99). The operating hours of the system varies approximately between 4:20 in the morning until 1:00 in the morning of the following day and it varies between lines.

Bielefeld city is in Northeast Germany, situated in the Region of North Rhine-Westphalia. It is one of the most important cities in the area.  It has a population of approximately 330,000 within the city limits, but it conforms a greater metropolitan area together with the cities of Gutersloh and Herford.  It is the 18th largest city in Germany.

The first mention of the city dates back to 1214.  Several decades ago, Bielefeld stood out as being an important city in the linen industry.  Nowadays, the economy is centred on the food, textile, and service industries. Furthermore, Bielefeld headquarters institutions are dedicated to mechanical engineering.  In the academic field, Bielefeld is also recognized because the city houses the University of Bielefeld, and the secondary school pertaining to this city.

The city is divided into ten municipalities and it has an area of 257.91 square kilometres. In the warmer months, the temperature varies between 13°C and 17.5°C; while in the colder months, it varies between 3.7°C and -0.6°C.

The Stadtbahn is a light rail system that operates in this German city. The longitude of the entire system is of 33.1 kilometres. Due to the fact that the railway system came from a tram, most of the stations are above ground. 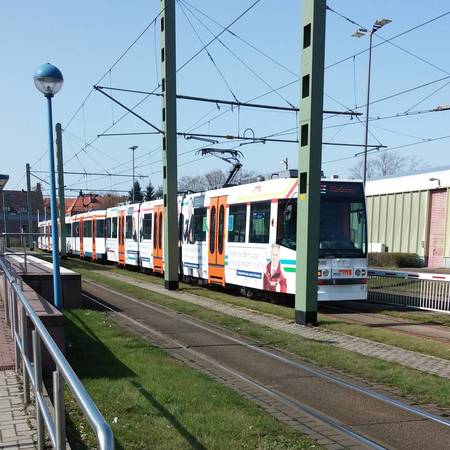 The rolling stock of the system has mutated quite a lot over the years. In totality, there are 42 vehicles operating in the Stadtbahn. There are two car series, which are the M8C and M8D. The first has the longitude of 26.64 m, while the second measures 27.19 m long. Both have axles for eight wagons, which gives them ample capacity. Recently, in 2012, the new and modern GTZ8-B models have been included, having a total of 16 vehicles. With an advanced design, these vehicles have a length of 34.30 meters.

The approximate number of passengers that the Bielefeld Stadtbahn receives per year is 32 million. The operator of the system is moBiel, which belongs to the public utility and municipal services company Stadtwerke Bielefeld.

Bielefeld is a city that had a tram system since before the creation of the Stadtbahn. The tram of this city existed since 1900, and instead of eliminating it; during the 1960’s, it was decided to convert it. The inspiration of the system was the conversion carried out in Cologne. 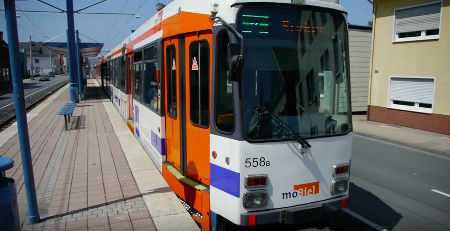 The construction had to undergo the excavation of a tunnel in the centre of the city that would support the movement of the future light rail. That is why, in the 1970’s, the construction that would allow the adaptation of the system began; but then they stopped, resuming in 1977. Already in the 1980s, the system had to make several adaptations, such as the relocation of lines 1 and 3, in addition to the replacement of a large part of the structure of the stations and the railway infrastructure.

Even more, the adaptation also included the vending machines for new tickets, the merger of several stations or the expansion of others, and the set-up of the new type of trains. Finally, on April 28, 1991, the tunnel was opened in the centre of the city, thus the tram of the city becoming into the Stadtbahn Bielefeld. Since then, the system has expanded by creating new stations on lines 3 and 4.

The Bielefeld Stadbahn has four lines with a total of 64 stations operating. The system has a total longitude of 33.1 kilometres. The stations are generally on ground level, as the system was adapted to become a light rail. There are only seven stations that are underground, and they appertain to the central part of the city. There are also four lines (10, 11, 13 and 18) that carry out a specific service on special workdays, performing different routes from the usual ones. In short, the four lines of the Stadtbahn are:

It is located on a north-south axis and it is identified in the system by the colour blue. The terminal stations are Schildesche and Senne, passing through important points, such as the Central Train Station of the city. Jahnplatz, Bethel and Brackwede are other sectors through which this line passes. It has 22 stations total, having the largest number of stations in the entire Stadtbahn.

With 21 stations, line 2 runs northeast to southeast, passing through the centre of the city, where it connects with the other lines. Its colour is green, and its terminal stations are Altenhagen and Sieker. Other sectors that it covers are Milse, Baumheide and Jahnplatz, in addition to Central Train Station.

Starting from the north in the Babenhausen Süd Station, line 3 reaches Stieghorst Zentrum Station in the southwest, with a total of 21 stations. The colour of this line is yellow. Furthermore, the areas that the route passes through are Jahnplatz and Sieker Mitte, in addition to the central railway station.

It is the smallest in the system because it has only ten stations. Its colour is red, and its terminal stations are Lohmannshof and Rathaus, which is the seat of the town hall of the city. Also, this line runs through sectors such as the University, the central train station, and Jahnplatz. 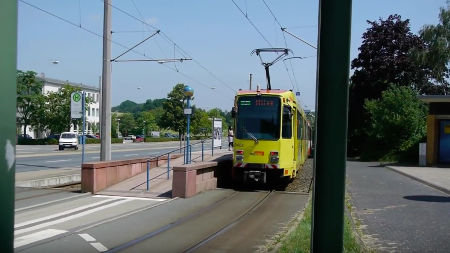 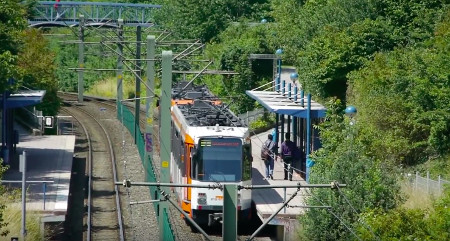 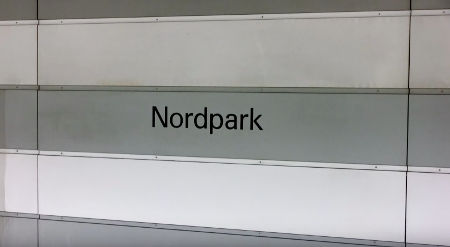 The students also have benefits in pricing, since they can buy a monthly subscription for €54.90 (US $62.26), which will otherwise cost €56.90 (US $70.74) if purchased at the moment of boarding. There is a Tourist Card that has a value of €8.00 (US $9.95) for one day and €13.00 (US $16.16) for three days and you can travel nonstop, as well as being able to enter dozens of museums and similar venues. The ways of purchasing these tickets vary between if it is bought in advance, either in machines or online, or if it is purchased directly at the stations or sold by the bus driver, because they are tickets integrated by the entire moBiel system.

Connections to Other Systems

Bielefeld, as a medium-sized German city, has different public transport systems that complement each other. All lines pass through the Hauptbahnhof, which is the main railway station of the city. Regarding the different levels of the railroad system, the city has eleven stations belonging to the Deutsch Bahn. Only two of these stations are connected to the Bielefeld Stadtbahn: Hauptbahnhof, which connects with the four lines; and Brackwede, which connects with line 1.

In addition to the regional trains and the medium-range and long distance trains, the other major transport system of Bielefeld is the buses, which also belong to the moBiel public company. In the city, there are a total of 17 conventional bus lines, in addition to 10 tangential bus lines. Besides, the more remote areas that are not serviced by the terminal stations of the railway lines are supplied through a series of commercial bus lines. From Line 1, buses leave for Theesen, Vilsendorf, Herford, Stedefreund, Spenge, Sennestadt, Lipperreihe, Friedrichsdorf, Ummeln, among others. From Line 2, buses depart to Elverdissen, passing through Herford; meanwhile, from line 3, the buses gset out to Thessen, Enger, Jöllenbeck, Ubedissen, Oerlinghausen, Hillegossen, among others.

It must be also said that there are 11 night bus lines, in addition to the regional bus line 59 that arrives at Neuenkirchen, departing from the Hauptbahnhof Central Station.

Connections to The Airport

The city of Bielefeld does not have a commercial airport, so it depends on other air terminals. The Bielefeld airport only services private and business flights, as well as functioning as the headquarters for several air clubs. Therefore, the city must depend on several airports in its vicinity within a two-hour distance. The closest airport to the city is the Paderborn/Lippstadt Airport, which is located in the town of Buren. Buren is located between the two cities that give the airport its name. It is the smallest commercial airport in the Region of North Rhine-Westphalia. The most efficient way to access this airport is by taking the regional train line RB74 at the Hauptbahnhof Station to the Paderborn Hauptbahnhof Station. There, you should take a bus to the airport on lines S60 or 460. 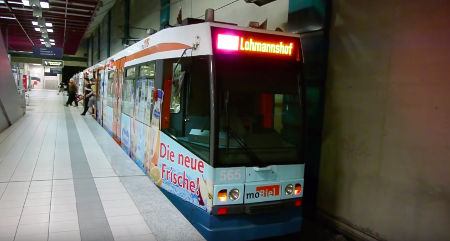 The Paderborn/Lippstad Airport is not very big, so it does not receive a large number of commercial flights. That is why many of the inhabitants of this city use Hannover Airport. To get there, you must take a train to Hannover from Hauptbahnhof using the ICE 10, IC 32, or RE70 lines. From there, you will have to take a train from the Hannover S-Bahn on lines S5 or S8. The Düsseldorf Airport can also be accessed via the railway line RE6. You can also access the airports of Bremen and Cologne using the rail system.

The Bielefeld Stadbahn is in permanent renovation, having developed different construction projects to expand the system's lines. moBiel developed a Masterplan for the year 2030, which includes 15 new expansion projects. At the moment, they have concentrated in only a small part of them. Among them, there is the extension of line 4 from Lohmannshof going through Dürerstraße and arriving at Schloßhofstraße, giving way to the University Campus. Also, line 3 will run from Stieghorst to Hillegossen. Probably, among the 15 projects, the most ambitious one is the construction of Line 5 of the Stadtbahn, which will be located in the Heppen District, and will count with 17 stations with a total of 7.2 kilometres in length.

What To See From The Bielefeld Railway

Bielefeld does not exist. Leaving aside the Bielefeld Conspiracy, the city offers attractions proper of all the medium-sized cities of the region of North Rhine-Westphalia. More and more tourists are approaching this city to prove its existence, and also to enjoy the quiet attractions that can be found there, as well as its striking geography. Some of the places that can be visited using the Bielefeld Stadtbahn are:

Sparrenburg: Taking Line 1, it is located next to Adenauerplatz Station. It is more than a castle, which was erected between 1240 and 1250. The construction was ordered by the counts of Ravensberg. Nowadays, it remains as one of the most important historical sites in the city, besides representing an attractive place to organize events.

Old Town Hall (City Hall): It is near the Rathaus Station that serves lines 1, 2, 3 and 4. It is a dry brown building resembling a small palace. It represents the seat of the municipal government and is also very close to the epicentre of the city.

Botanische Garden: It is a few blocks northwest from the Bethel Station from Line 1 at a walking distance. It is the botanical garden of the city. Although it is a small park compared to other German cities, in general, it has a wide variety of species and plants and they are in a very open space.