The S-Bahn is the metro system in Hanover, Germany. It belongs to GVH. The metro was officially inaugurated on June 1st, 2000. It has 8 lines and 74 stations. S-Bahn makes connections to all other trains and buses from GVH, such as Stadtbahn. The metro goes directly to Hannover Airport. It opens every day, and during weekdays, opens from around 4:00 am until 1:00 am. You could pay the metro with either tickets or cards, with prices starting from €1.5. You need to buy an additional ticket to bring dogs. Bikes can be brought during certain hours. All trains allow easy access to people with disabilities. In 2020, a new station in Hildesheimer Strasse will be built. You could go to attractions like Herrenhausen Garden by the S-Bahn.

The city of Hanover is the capital of the state of Lower Saxony in Germany. It has a population of approximately 500,000 people, making it the most populated city in Lower Saxony. Hanover is famous for being the location of Germany's best universities, especially in the field of medicine. The city also has the highest number of fairs in the world, including the famous CeBIT Computer Fair.

Hanover has a big network of buses. Also, there is a light railway system called Stadtbahn, a light rail comprised of tramways and also some U-Bahn sections. There are multiple lanes for bicycles on the streets. You can bring your bicycle to buses and trains. The central station of all trains in Hanover is called Hauptbahnhof. Some of the trains in this central station are the ICE (high speed train), and the Hanover Metro, also called S-Bahn (subject of this article). The Hanover Metro belongs to the transportation association of GVH (Greater Hanover Transport Network,) which also owns buses and trams.

During the 60s, there were plans to improve the railway system of Hanover. During 1965, tramway services were added to the city. There were plans to build a metro service after 2000. However, after Hanover got chosen in 1990 to host the EXPO 2000 world fair, the metro was re-scheduled to be built in 2000 in time for the fair. A contract was made in November 12, 1990, between the city of Hanover and many train companies, with the aim of improving the railway services.

The metro began to be built in 1993 with the construction of Hannover-Karl-Wiechert-Allee station. This station opened in 1999. More tracks for the metro were built in 1994, with the construction of stations in Wunstorf and Seelze. These two stations opened to the public in 1997. Then, the Hannover-Nordstadt and Hannover-Ledeburg stations were built, replacing other train stations. The metro was later expanded to go to Hannover Airport in 1995. Right before EXPO 2000 began, the stations of Ahlten and Lehrte were opened. For EXPO 2000, the metro was conditioned for easy access for people with disabilities. The official inauguration of the metro was during EXPO 2000, on June 1st, 2000. After the fair, the metro continued to be expanded and continued to replace stations from other train services, such as Regionalbahn. One of the most recent expansions for the metro was on December 14th, 2008, with the opening of the stations in Hildesheim and Celle.

The S-Bahn, which belongs to GVH, makes connections with buses, trains, and trams that also belong to GVH. One of these trams is the Stadtbahn. To make connections from the metro to all the other means of transportation from GVH, you require the Hannover Card.

The metro is open every day, including holidays. The opening and closing times for each line from Monday to Friday are the following:

Tickets and cards are available. Prices vary by zone. Pricing is divided into two colors: red and blue. Red prices are prices for tickets that lasts for one day, while blue prices are prices for cards that lasts for over one day. Prices in red allow rides to three zones: Hanover (city region,) Umland (cities and municipalities surrounding Hanover,) and Region (rural areas.) Prices in blue allow rides to four zones: Hannover 1 and Hannover 2 (which belong to the city area of Hanover,) Umland, and Region. 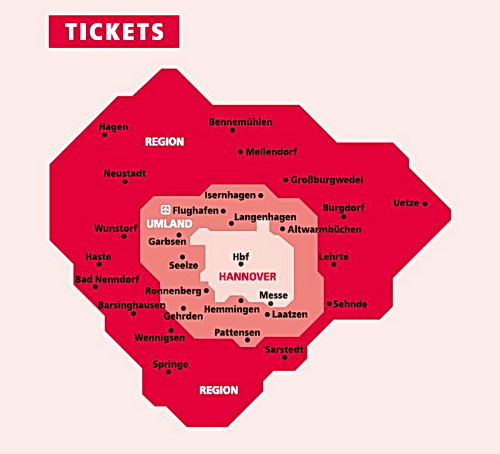 They are divided into: Single Journey, Day Tickets, Combined Tickets, and Further Offers.

3) Combined Tickets: Tickets for rides to events such as concerts or theater performances. They are divided into three: Combined Ticket, Car Workshop Ticket, and Hotel Ticket.

You can bring a maximum of three bicycles with you to the metro. On weekdays, you cannot bring bicycles to the metro before 8:30 am nor from 3:00 pm to 7:00 pm. During weekends, you can bring your bicycle anytime.

You can park your bicycle anytime in the metro stations.

The metro's customers can park their cars for free in the metro stations in any of the over 5500 parking areas. There are pillars with red emergency buttons and green information buttons in every station. If you are not sure whether you are in an emergency, press the green button. If you witness a fire or if you are in any urgent situation, press the emergency button to contact the metro personnel.

The trains have green information buttons to speak with the driver. There are also emergency phones in the metro. Each train has emergency brakes that completely stop the train, which must he used only during emergencies. However, the train will only stop at a station to avoid collision with other trains.

You can contact the metro's personnel for any help at the following phone number: +49 51127901020. You can ask for a compensation if the metro is delayed over 20 minutes, by having a free ride on trains from other companies. You need to fill out a form to request this compensation.

A new station will be built in Hildesheimer Strasse by 2020, which will connect to other means of transportation belonging to GVH. Additionally, a new station in Braunschweiger Platz will be built. Additional railway for the metro will be built to go to the city of Laatzen. Among other stations planned to be built include: Springe Deister, Seelze-Lohnde, Wustorf, and in Barsinghausen West.

The S4 line will have electrical rails and will be expanded. This will allow the construction of a new station in Adelheidsdorf.