The Nuremberg Metro is a complete urban transport system run by the VAG, the local transport corporation – which in turn is a subsidiary of VGN, the Nuremberg Region transport authority. The Metro system comprises three interconnected lines, allowing passengers to enjoy the entire network efficiently. There are 48 stations, spread out over 37 kilometres. Metro stations can be easily recognised in the streets thanks to their distinctive logo: a blue square with a white “U” in the middle. The U stands for “U-Bahn”, which is how locals usually refer to their Metro system.

The Nuremberg Metro’s first line started operations in 1972, making it the youngest Metro system in Germany, as well as the first one to implement automatic self-driving trains. It is one of Germany’s five metro systems, and it is the shortest as well as the newest. Nowadays, its three lines serve thousands of passengers daily, locals and visitors alike.

Although the first drafts for a Metro system in Nuremberg date back to 1925, the project was initially put on hold because it was regarded as too complex and costly for the time. It wasn’t until after World War II that the project was brought back to the table. The blueprints were approved in 1965, and construction officially began in 1967.

In March 1972, the first Metro line – the U1 – began its services, connecting Langwasser Süd with Bauernfeindstraße, at a distance of just 3.7 kilometers. This line was progressively extended beyond Nuremberg’s city limits: it reached the nearby city of Fürth in 1985; the current terminus, Fürth Hardhohe, was inaugurated in 2007.

The second line, the U2, began operations in 1984, and initially connected Plärrer and Schweinau stations. Just like the U1, the U2 tracks were extended several times between 1984 and 1999, when a direct subway link was established with the Nuremberg airport.

The newest line in the system, the U3, began operations in June 2008, and its latest section was completed in 2017. Currently, there are no major expansions in the works, although there are plans for new stations along the existing tracks, in order to adapt the network to the city’s ongoing development.

The full Nuremberg Metro system comprises three different lines, which connect at several different points and allow passengers to enjoy the network in its entirety. The Nuremberg Metro tracks run for approximately 37.1 kilometers, and comprise 48 stations shared among its three lines. Each line has a representative color and code – the letter U followed by the line’s number. The color and code allow users to identify each line at maps and stations alike. Passengers usually use the code, rather than the color, in order to refer to each line.

This was the Metro’s initial line, and it’s the only where trains are still manually driven. The U1’s 27 stations connect Nuremberg with the nearby city of Fürth, crossing Nuremberg’s city centre. Its terminal stations are Langwasser Süd in Nuremberg proper, and Fürth Hardhöhe in Fürth.

This is the Nuremberg Metro’s second oldest line. Its 16 stations comprise 13 kilometers of tracks, which run north to south, perpendicularly to the U1 line. The terminal stations are Röthenbach on the South, and Flughafen on the North end. Unlike the U1, the U2 line is fully automated, and all trains are driverless. 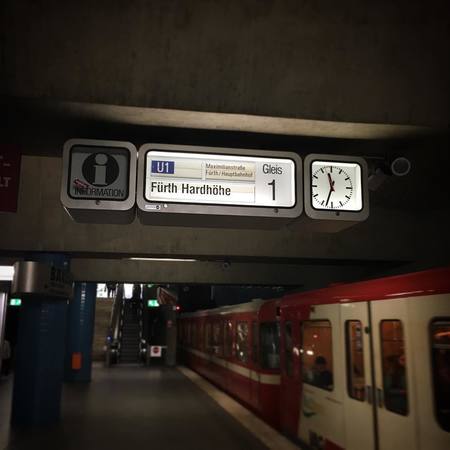 This is the newest line in the Nuremberg Metro system, and with only 9 kilometers of tracks, it is also the shortest one. This line shares 6 of its stations with the U2, but it diverges from it on both ends: from Rathenauplatz to Nordwestring to the west, and from Rothenburger Straße to Gebersdorf. Nordwestring and Gebersdorf stations act as the line’s terminals. This was Germany’s first metro line to be fully driverless and automated.

All metro lines operate from 5:00 AM until 12:00 midnight. Night buses are available to replace the Metro after closing time. Trains leave each station every 6 to 10 minutes during regular hours, and every 3 to 6 minutes at peak hours.

The Nuremberg Metro offers a wide variety of tickets for occasional or one-time passengers, as well as passes for frequent travelers. Children under the age of 6 can travel for free, and children between the ages of 6 and 14 pay discounted fees, no matter the type of ticket. 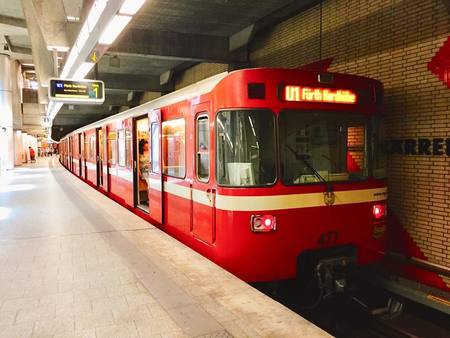 All types of tickets can be purchased on the VGN website, through the VGN dedicated app, or at any of the vending machines available at all stations and around the city. Tickets bought on the website are cheaper than on any other platform. Short distance ride: This ticket enables the user to travel for two stops on the metro, four stops on the bus, or four stops on the tram.

Four-trip ticket, short distance: This ticket enables four different rides, each for two stops on the metro, four stops on the bus, or four stops on the tram. This ticket provides a lower fare per ride than the single ticket version. It can be used by four people simultaneously, or it can be divided and used by two passengers who are not travelling together.

Single ticket: This ticket is valid for 90 minutes, no matter how long, although it can only be used in one direction (it’s not valid for a round trip). It can be used on the metro, bus or tram.

4-trip ticket: This ticket allows four different rides of any length, of up to 90 minutes each. This ticket provides a lower fare per ride than the single ticket version. It can only be used in one direction (it’s not valid for a round trip) but it can be used for up to four people simultaneously, or divided among two passengers who are not travelling together.

All day ticket solo: This ticket allows unlimited rides on the metro, bus, and tram networks for one weekday or one weekend. It is valid until 3:00 AM of the day after its activation.

All day ticket plus: This ticket allows unlimited rides on the metro, bus, and tram networks for up to six passengers (maximum two adults), for either one weekday or one weekend. One of the six passengers can be replaced by a bike.

7-days MobiCard: This ticket allows unlimited travel for one week, for up to six passengers (maximum two adults). It can be used between 5:00 AM and 9:00 PM on weekdays, and at any time during weekends and bank holidays. 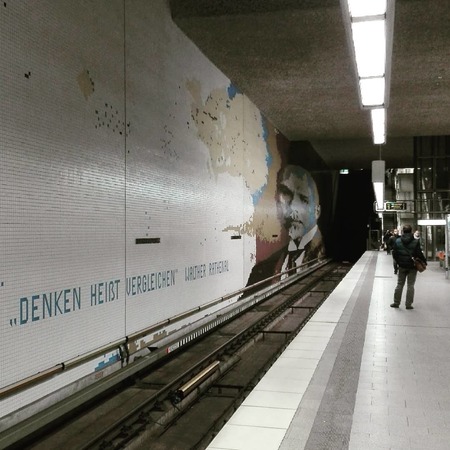 Hotel ticket: Some hotels in Nuremberg offer their guests the option to buy an unlimited 2-day ticket. These tickets can only be purchased at partner hotels.

Group ticket: This ticket is valid for groups of at least 10 adults (two children under 14 count as one adult), provided they are travelling together.

In addition to the different tickets available for occasional travelers, the Nuremberg Metro system allows a wide array of passes designed for frequent passengers:

The three lines that comprise the Nuremberg Metro system cross each other at different points, and make it easier for passengers to transfer from one line to the next. The cost of the transfer depends on the type of ticket purchased, however: the short-distance ticket only allows passengers to travel through two consecutive stops, while the single ride ticket only allows travel in one direction. 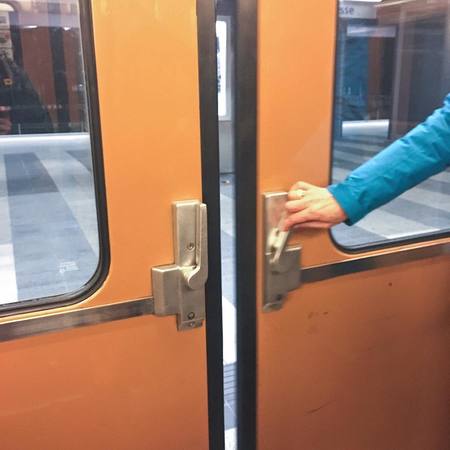 Connections with other transport networks:

VAG Nuremberg, the corporation that runs the Nuremberg Metro, is a subsidiary of VGN, which is in charge of public transport across the Nuremberg region. This means the Nuremberg Metro is highly integrated with all other public transport methods in the city. Tickets bought at any station are valid across metro, bus, and tram networks. The cost of each transfer, however, will depend on the specific type of ticket purchased. Some include interruptions and transfers, whereas others only allow single short-distance rides or one-direction travel only.

Furthermore, the Nuremberg Metro is also integrated with the national rail network through Hauptbahnhof, which acts as the region’s main transport hub. From this station, it is possible to take a regional or long-distance train to any of the country’s major cities.

The Nuremberg public transport network includes 11 parking lots. Parking is free of charge for up to 48 hours, but passengers must possess a valid ticket or pass in order to use them. Exact locations for these parking lots can be found at the VAG official website. 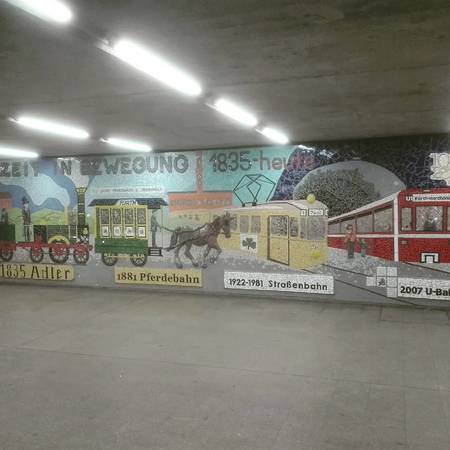 All the initial plans for the Nuremberg Metro system gave been progressively expanded, and have eventually reached their projected destinations. Right now, there are no official plans to expand any of the existing three lines. Some expansions were proposed and then rejected because of funding concerns, or because impact studies showed their operation depended on external variables (such as support from neighboring cities).

Although none of the Metro’s three lines are going to be expanded, there are proposals to build additional stations within the existing tracks:

The city of Nuremberg has only one airport, but it is easily accessible through the Metro network. One of the U2 line’s terminal stations links directly to the airport. Passengers wishing to reach the air terminal can simply board the U2 at any station, or transfer into it from any of the city’s other transport systems. Keep in mind that transfers between all three lines are available at Plärrer and Hauptbahnhof.

With over 950 years of history, Nuremberg has numerous historical sites, dating back from the Roman Empire up to World War 2. Keep reading to learn more about some of the tourist attractions that can be reached via the Nuremberg Metro.

Nuremberg Castle: This is an architectural complex dating back to medieval times, located in the city’s historic centre. This includes the Imperial Castle, a fortress built in Roman times, as well as Burgraves Castle and its surrounding walls. The site is now regarded as one of Europe’s most important medieval sites. Friedrich-Ebert-Platz station can be reached via the U3 and is only 10 minutes away from the Nuremberg Castle.

Zeppelin Field and Documentation Centre: The Zeppelin Field is one of the few World War 2 buildings that survived the bity’s bombings. Here, thousands of Nazis gathered to hear Hitler’s speeches. Nowadays, both the rally grounds and the adjacent Documentation Centre are open to visitors, and host numerous exhibits on World War 2. In order to visit the Zeppelin Field, you may take any of the three Metro lines up to Hauptbahnhof, and then transfer into Tram line 6m, which will leave you across the street from it.

Weißgerbergasse: This Street is littered with charming medieval homes, seemingly out of a fairytale. A stroll down the Weißgerbergasse will immerse you in the old typical style of German architecture. Some houses are even open to the public, and visitors can see their well-kept gardens. Weißgerbergasse is a 10-minute walk away from Lorenzkirche, one of the U1 line’s stations.

Albrecht Dürer’s House: This is the house of Germany’s most important Renaissance artist, where he lived from 1509 until his death in 1528. Now it’s open to visitors as a museum. The house is close to Nuremberg Castle, 8 minutes away from Friedrich-Ebert-Platz station.