The Link Light Rail has two main lines: Central Link and Tacoma Link. This light rail has a total extension of 35 kilometers, and a total of 21 stations. The two routes have no connection between them.

The price of the tickets is calculated based on the distance travelled. The prices range from 2.25 $, for short rides, to 3.25 $, for the longest rides.

The Link Light Rail´s business hours are from 5:00 am to 1:00 am, from Monday to Saturday. The schedule changes during Sundays and Holidays.

The train frequency ranges between six and 15 minutes, depending on the time of day.

There is a direct connection with the airport at the SeaTac/Airport East station. This journey can be done quite quickly and in a comfortable manner

Seattle is widely known for being one of the most prosperous cities in the United States, full of businesses, middle-sized firms, and academic institutions of a very high quality.

It is located 155 kilometers to the south of Canada, in the state of Washington, specifically, on the King county.

Even though archeological evidence suggests that the land of Seattle has been populated since 4,000 years ago, the first European settlements did not arrive until mid-19th century. Currently, it has a little over 3,700,000 inhabitants within its metropolitan area, which has an arear of 21 square kilometers.

Just like any other big city, this metropolis has big transportation systems, in which you could count all of the avenues and highways that function as roads for the mobility of the citizens. The transportation services available include bus lines, suburban rails, and two fast tram routes.

That last system of transportation is called the Link Light Rail, and it crosses the city from North Seattle to the south of the city. It has a length of 35 kilometers, 21 stations, and two lines. 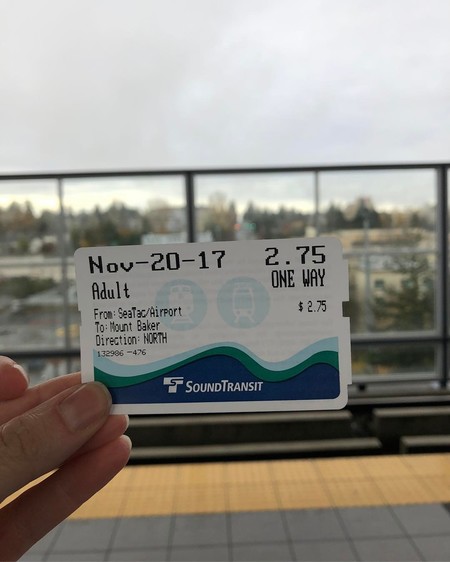 This time gap between the inauguration of both lines was the consequence of the project´s funding during the mid-90s, when opponents of the municipal government argued that the city did not need a system of transportation of that kind and harshly criticized the government for funding the project. Nevertheless, the Link Light Rail ended up being built, and became an important mean of transportation for the people of Seattle.

The Link Light Rail has two main lines, and it has a total of 35 kilometers of railway length and 21 stations. The light rail transports over 80 thousand users daily, resulting in a yearly ridership of approximately 24 million passengersp

The two routes have no connection between each other since they both offer transportation on different regions within the city.

It began operations on July 18th, 2009. It is 32.4 kilometers long, and it offers service to 16 stations. Its journey starts to the north of the city, at Washington University, and then goes through downtown Seattle, until it finally reaches the south of Seattle, at the region of SeaTacp

* See the “stations and connections” annex for more information.

This line began operations on August 22nd, 2003. It has 2.6 kilometers of length, and it is divided in six stations. Its journey starts on the northern end at the center of the Tacoma neighborhood, and it travels throughout most of the region. Its journey ends near the Tacoma Dome.

* See the “stations and connections” annex for more information. 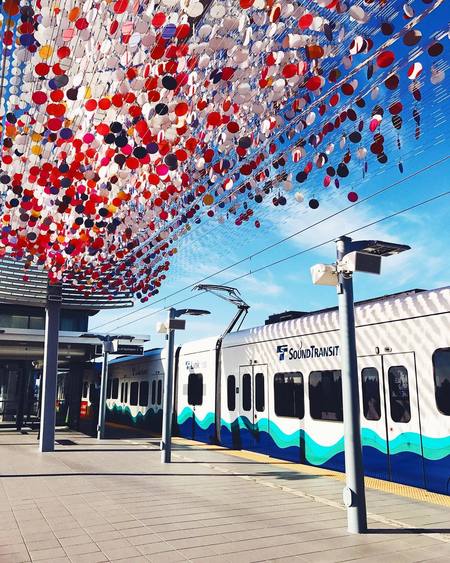 The tickets to board the Seattle Link Light Rail can be acquired at ticket vending machines at stations, through the use of the Transit GO Ticket app, or, instead of using tickets, you could buy the refillable cards called ORCA. The Transit GO Ticket app is available for free on the application online stores of mobile phones.

These cards have a price of 5.00 dollars, and can be acquired at vending machines, authorized stores, and ORCA centers. The ORCA card for young people (between the ages of six and 18), and the cards known as the ORCA LIFT, which allow the user to obtain special discounts depending on the zone where they live, can only be bought at ORCA centers or obtained through regular mailp

Once you get one of these cards, you will get the possibility of loading them an amount of up to 300.00 dollars, or you could choose to pay a monthly plan. The latter option costs 18.00 dollars per month, and the card will keep charging you monthly until you reach the amount of 207.00 dollars.

The fares for trips on the Link Light Rail trains depend on the number of stations that you decide to travel to. In other words, the light rail’s fee depends on the distance travelled.

On the website www.soundtransit.org, you will find a table with the fares that you need to pay to use the public transportation to move around the city of Seattle. The prices range from 2.25 $ (for short trips) to 3.25 $ (for long trips).

Young people (between the ages of six and 18) will have to pay a lower price than the rest of the users. In this case, the established fare is of 1.50 $, regardless of the distance travelled.

Meanwhile, people over 65 years of age and users with disabilities only pay 1.00 $ per journey.

Children under five years of age travel for free. 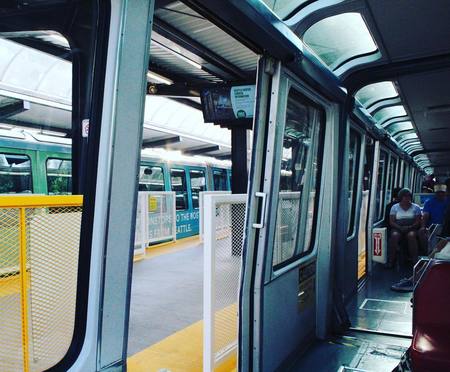 The Link Light Rail opens its doors to the public at 5:00 am, and it remains open uninterruptedly until 1:00 am, offering 20 hours of service per day. These are the business hours from Monday to Saturday. On Sundays and holidays, the trains begin operations at 6:00 am, and they cease operations at 12:00 am. 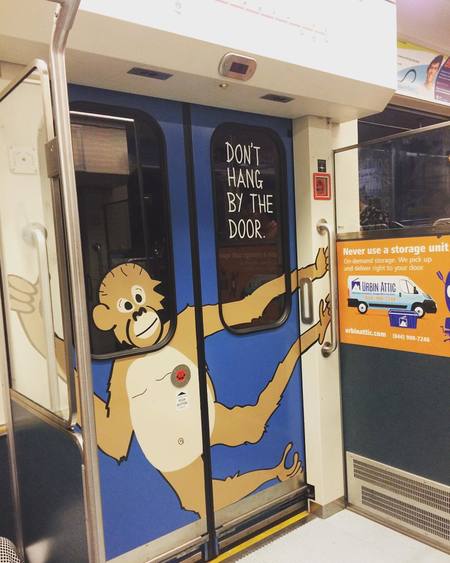 The Seattle-Tacoma International Airport is located 21 kilometers away from downtown Seattle. This distance may seem like a long one.

However, thanks to a direct connection that the Link Light Rail has with the airport at the SeaTac/Airporteste station, this journey ends up being quite fast and comfortable.

The trains of this transportation system depart from the airport each six or 15 minutes. The stop is located near baggage claim area of the airport, which is at the north of the airport, right after crossing the suspended bridge located in said area. In specific cases, such as when you suffer from a health problem, you can board a small electric car that transits between the baggage claim area and the light rail stop. This way, you won’t need to walk.

Once you are on the stop, you will only need to wait for your train, which will get you to Seattle in approximately 40 minutes. The vehicle’s business hours are the same as the rest of the Link Light Rail system, which is between 5:00 am and 1:00 am on weekdays, and 6:00 am and 12:00 am on weekends. The price of the ticket is of 3.25 $.

Additionally, there are also some bus stops and taxi lines outside of the airport that could transport you to any destination within the city in case that you need a ride with more privacy or if you have too much luggage.

On 2008, a voting poll was carried at the King county. During the voting, the authorities approved the construction of new light rail railroads to be done between 2021 and 2024, in a project that was called Sound Transit 2, which would expand the Link Light Rail system. These new extensions will reach the neighborhoods of Northgate and Lynnwood, which are located at the north of Seattle, and will also reach the regions of Bellevue and Overlake, which are located to the east of Seattle.

Also, the blueprints of the project show that improvements on the current services will be done, such as renovating the trains, railroads and stations. Additionally, new stations on the current routes will be built.

Seattle, just like any cosmopolitan city, offers its visitors a wide variety of leisure, art, and entertainment facilities that the citizens have access to, especially at the downtown area. Some of these facilities are available for free, while others require a fee.

One of these facilities is the Seattle Public Library. This place is an architectural masterpiece made out of steel and glass, and it is a place that encourages people of all ages to read. It is located in downtown Seattle, this library has become a must-visit place to those who want to take good photos while they visit the city. Additionally, its interior has a huge number of books, which can be read for free within a calm and cozy surrounding. This building is located a couple of blocks off the Link Light Rail’s University Street station.

Also, travelers can find the Seattle Art Museum. This place is a space with a big diversity in exhibitions, where visual works and well-illuminated galleries have been available since its inauguration on 1933. Without a doubt, this is a must-see place for art-lovers, who will be able to enjoy magnificent works of a sublime composition. These artworks include a mix of city-related pieces and works inspired by the American geography.

This museum is just a few blocks off University Street station and the Pike Place market. The museum frequently hosts new art collections, which has pieces from both the United States and other countries. Therefore, it is common to find works from Europe, Asia, Oceania, and even from Native American tribes. Also, its modern architecture is one of its highlights, which makes this museum an ideal place to strike a pose for your photos that will bring you back sweet memories from your vacation on this North American city.

The Seattle Link Light Rail has many connections with other transportation systems, including suburban trains and bus lines, which complement each other.

Below you will see the stations of each line that have some sort of connection: