Boston Metro is known as the “T” or just The Subway. It was built in 1897 and was the first subway system built in the United States. It's composed of 4 lines: orange, blue, red and green. On most days, service begins between 5:00 and 5:30 in the morning. The basic ticket or CharlieTicket is prized at $2.75. There are subscriptions available for students and seniors and children younger than 11 years old ride for free. The Boston subway is managed by the Massachusetts Bay Transportation Authority (MBTA). An interesting fact is that if the train is not full you're allowed to put your feet up on your seat. If you commit a crime that goes against the subway rules you can be banned for life.

Boston is one of the oldest cities in the United States. The Boston metropolitan area has a population of approximately 4,500,000 inhabitants, making it one of the most populated urban areas in the country.

Located in the state of Massachusetts, it’s considered the financial, economic and cultural center of the New England region, in the northeast of the American union. Boston has a vast public transportation system to attend to the millions of workers that are on the move daily. The different ways to travel in the metropolis can be found under the administration of the Massachusetts Bay Transportation Authority (MBTA).

The locals know this system as the “T”, as its commercial logo is of this same letter, making it recognizable by any visitor as well. Included in the different ways of travel provided by the MBTA are, buses, light rail trains and the metro system, known to North Americans as the subway.

The Boston subway is the United States’ first underground system. Its inauguration took place 3 years prior to that of the worldwide known New York subway and 34 years after the one in London. Date of the year 1897. It was named a national historical monument.

The need for an underground system came as consequence of the overcrowding of the city's trolleys, which were not enough for the people anymore. Since 1900 it had an unprecedented expansion. The MBTA built more tunnels for the subway, the lines were extended throughout the center of the entire city, while also connecting the local communities through, not only the subway but also with the expansion of the railway and bus routes. There are also currently new plans of modernizing the system. 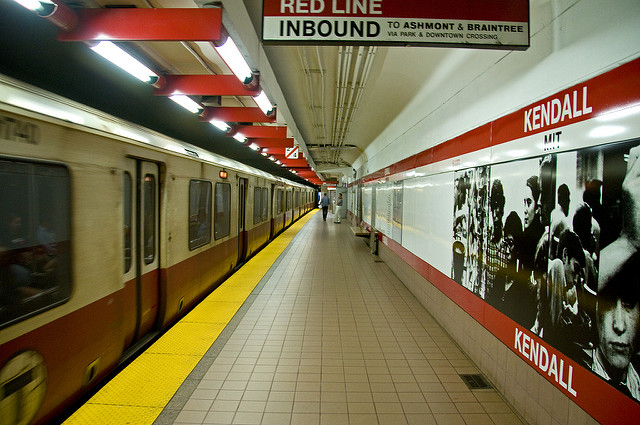 The Boston subway is composed of four lines, identified by the colors orange, blue, red and green.

Inaugurated in 1897, it was the first of its type for the United States. It's composed of a fleet of superficial trains, that replaced the old tram, that for a very long time, circulated throughout the center of Boston. With 66 stations, a 37-km route and a daily demand of 230,000 users, its dimensions are such, that it divides into four tracts identified with the letters B, C, D and E, making it the largest of the “T” system. It unites the east with the center of the city, the towns of Brighton, Newton, Mission Hill and Jamaica Plan, are connected to this line in their different courses.

Inaugurated in 1901, it provides 19 stations that extend from the location of Jamaica Pain to Forest Hills, a length of 18km. Daily it’s used by more than 200,000 passengers. It unites the north with the southeast part of the city, passing through the center, where it makes transfers with the other three lines in different stations. All the stations of the Orange Line, are equipped with high-level platforms, with the thought of bringing access to handicapped people, while also having elevators that are provided with the same thought in mind.

It was the third line to start operating in 1904. It has 12 stations throughout its extended 9.7km, besides two more that are currently in construction. In this line’s case, its daily influx is calculated at approximately 67,000 users. It unites the neighborhood of East Boston, to the northeast of the city, with the center. It should be pointed out, that this line connects with Logan International Airport in Wonderland station, where passengers can take a bus to get them close to the air terminal.

The Red Line, inaugurated in 1912, connects the north of Boston with the south zone. It is the most extensive line of the system with a total of 29 stations dispersed along 34km. It connects the neighborhood of North Cambridge to the north of the city at Alewife stop, with two different locations in the south. The path separates at JFK/UMass station, where some trains head towards Braintree and others towards the neighborhood of Dorchester.

Each subway line has its own distinct schedule for departure, although most begin operating at around 5:00am to 5:30am from Monday through Saturday, while on Sundays they begin after 6:00am.

On the Red Line

The first train leaves at 5:24am from Alewife station, located in the northeast part of the city in the town of Cambridge, bound for the neighborhood of Braintree, while from the same station, but headed towards Ashmont terminal, in the historical neighborhood of Dorchester, it leaves at 5:16am. In reverse direction, from Braintree and Ashmont stations, bound for Alewife, the first trains leave at 5:15am and 5:16am, respectively. These schedules apply from Monday through Saturday. On Sundays, all the trains form the Red line begin operating at 6:00am. Also, the last train to provide commercial service leaves at the following times: Alewife-Braintree 12:15am, in reverse direction Braintree-Alewife 12:17am. Additionally, in the direction of Alewife-Ashmont 12:22am, in reserve direction Ashmont-Alewife 12:30am.

Schedules on the Blue Line

Schedules for the Orange Line

Schedules for the Green Line

Tract “D” of the Green line leaves at 4:56am from Riverside station in Newton towards the Government Center terminal in the center of Boston. In the opposite direction, the time of departure for the first train is at 5:41am. While, the last trip from this tract leaves at 12;05am from Newton to Downtown, and from Government Center station to Riverside at 12:49am.

The Boston subway system offers different payment options that adapt to the needs of consumers. The basic pass, that consists of a ticket paid in cash, costs $2.75, and it’s known as CharlieTicket. Additionally, the MBTA provides their customers with a card known as the CharlieCard, which makes the trip cost $2.25. With this card one can also gain access to LinkPass plans, that are detailed below:

Proper use of installations

The Boston subway has its own security force called the MBTA Transit Police Department. They’re in charge of assisting in keeping passengers safe and helping them with their complaints. They have the right to carry out investigations, as well as arrests in the case of illicit acts inside the transportation system. They have a team that is specialized in sexual harassment cases in the trains, either physical or verbal, which they pay a of attention to. Their service is highly qualified when it comes to taking care of any incident that may put at risk the passenger’s integrity.

You may travel to Logan International Airport in a simple and convenient way, using the blue line of the subway. You must take a train in direction to Airport station, where when leaving the terminal, you will have buses available that are identified with the name of the company known as Massport, that oversee the airport’s logistics. The trip takes between 10 to 15 minutes, and is completely free.

In the opposite case, if you travel from the airport to the center of the city by subway, you will have to take one of these bus lines: no. 22, 33 or 55 in direction to the Blue line of the subway system. All vehicles are identified with the name of the company called Massport, located to the south of the air terminal, right outside the entrance.

It also should be mentioned that in the airport you will have available the Silver line that does not have to do with the subway, but is a fast way of connecting to the city. It’s a system of articulated buses, that circulate through fast transit channels in the city, and that make connections with the Red, Blue and Green lines of the Boston subway. If you board this system in the air terminal, the trip will be free. In the opposite case, if using this line to get to the airport, you will be charged $2.00 per trip.

There is currently a request to extend the Blue line to the neighborhood of Lynn to the north of the city. At the same time, it is planned to have a connection in the south with the Red line in its west tract. On the other side, the Green line also has plans of expanding to the north towards the neighborhoods of Somerville and Medford, relocating Lechmere station and ending the road that unites both sectors. It is estimated that this last project will cost three thousand million dollars, and would be inaugurated towards the end of 2021.

Additional to the projects with the Blue and Green lines, an urban ring is expected to be built in the center of the city and it will unite bus routes, subway stops and railway terminals, which would provide the user fast travel between systems.

The first place that you must visit if you’re in the city of Boston is the Waterfront, located right outside the Aquarium station of the Blue line. It’s a dock with breathtaking views over the city’s port, that also captivates the panoramic views of the center and its skyscrapers. It’s a wonderful place to spend an afternoon doing something different, contemplating the Boston architecture.

Also in the same station, a few meters from the Waterfront, you can find the New England Aquarium. It’s an aquarium with exhibits including thousands of marine species, distributed into sections such as Sharks and Rays, Turtles Uncovered or Penguin Power. It’s a place that must be visited by locals and tourists for its ample variety of specimens, and also for offering recreational activities that allow visitors to interact with certain species under the supervision of someone in management.

Another destination that must not be overlooked is the Museum of Fine Arts accessible from Green line. It has the second largest artistic exposition in the United States, surpassed only by the Metropolitan Museum of Art of New York, which makes it one of the most symbolic museums of the north American country. It was founded in 1876, it exhibits collections of Egyptian antiquities, paintings of French impressionism and post-impressionists, Chinese art and paintings, Japanese creations and a section dedicated to the Rothschild family, from Austria. Likewise, it has a library with more than 320,000 books.