The Buffalo Metro has a single line that serves 13 stations in 10.3 kms of route. Some of them are at ground level and some others underground.

The most basic fare is 2USD but it offers a 1USD reduced version.

There is no direct connection from the Búfalo Metro to the Niagara International Airport, although it is easy to get there by leaning on the metro service.

Buffalo, which is located on the state of New York, USA, is the second biggest city of said state, ranking just one position below New York City. It has around 258,000 inhabitants living in an estimated area of 136 square kilometers.

Historically speaking, this state has been an important meeting point for merchants that transported their goods between New York and Canada since it lies just in the middle of the road. In fact, this city is one of the main enclaves within the Buffalo Niagara Region, a region that is located within the area bounded by the eastern Great Lakes of North America.

However, even though it is located at a good geographical location, Buffalo is one of the poorest cities of the United States, with an average income per family that is barely above 50% of the national average income. The poverty in this city was caused by the transition from the old industry-based economy, which was the main source of jobs, to the new service-based economy. The economic reality of this city was quite different during the 70s and the 80s.

During these years, projects such as the Buffalo Metro Rail became a reality. This train service consists of a light rail train that goes through downtown Buffalo through 10.3 kilometers of length, stopping at 13 stations.

Its construction began on 1979, and it was originally planned to be an extensive heavy train system that would also offer service to the suburbs within the metropolis. However, while the metro was still being built, Buffalo’s population started to decline. As a consequence, the local authorities came to an agreement to only leave a single operational line, which was opened to the public on 1985. The construction of the remaining parts project are currently halted.

The Buffalo Metro has only one operational line that goes from the north of the city to the south of the city, crossing through downtown Buffalo. It has 13 stations, some of which are at surface-level (in which the journey is free), while the rest are located underground. Its road is spread throughout 10.3 kilometers of length.

Below, we will see the stations of the system in detail: 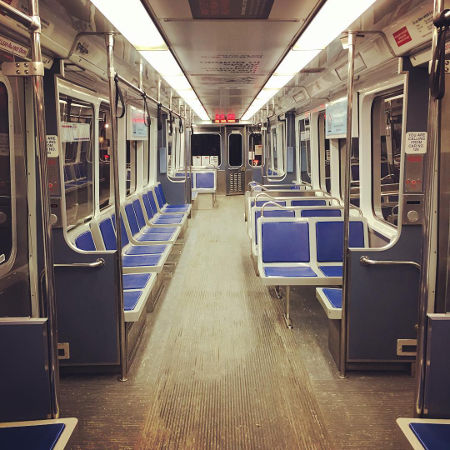 The Buffalo Metro has connections with at least one of the bus lines throughout most of its stops. This is done with the purpose of giving many transportation options for the passengers, so that they don´t have to drive their own cars.

The Buffalo Metro, unlike the huge New York metro, does not operate all day long. However, its business hours are still quite convenient for its users. From Monday to Friday, the stations open at 5:00 am, which is the time when the first train arrives at each station. However, some of these trains arrive a bit later than 5:00 am depending on the distance between the target station and the terminal station. The stations close at 1:00 am, which is the time in which the last train arrives at the northern and southern terminals.

Meanwhile, on Saturdays, the rolling stock begins its journey starting at 7:00 a.m., since there are less passengers, and end their journey throughout the 13 stations of the system at 1:00 a.m. If you plan to use the metro on Sundays and holidays, you will have to wait until 8:00 a.m. to board the first train. The last wagon transits the railroad until 11:30 p.m.

Throughout the regular course of the day, the vehicles stop by the stations each 12 or 15 minutes from Monday to Friday. On weekends and holidays, the waiting time between trains increases to 20 minutes, which is a significant increase.

The Buffalo Metro offers different prices in order to adjust to the needs of the different users. The total cost of the journey becomes cheaper if you buy tickets with a higher price. For instance, if you are going to travel frequently, a monthly pass is a better option than buying a ticket every day.

This ticket is only valid for a single ride on the metro or the bus within the city of Buffalo, and it can be used only once. Therefore, if you transfer from the metro to the bus or vice-versa, you will need to get a new ticket.

This alternative allows you to travel on the trains and buses of the city of Buffalo throughout most of the day, specifically, from 5:00 am to 2:00 am. This ticket can be used in both trains and buses.

With this ticket, you can travel on the Buffalo Metro and the urban bus lines for 7 whole days, which will be counted from the day that you buy the pass.

It is a pass designed for users who frequently travel on the public transportation system of Buffalo. It allows you to use the bus lines and the metro system unlimitedly for 30 days. The days will be counted from the moment that you buy the pass.

Unlike previous passes, which have fares based on the number of days that the ticket lasts, this alternative brings you the possibility of travelling many times, regardless of the moment in which you decide to use them. There are two versions, 10 journeys and 20 journeys, and they are not eligible for a reduced fare.

This option is targeted towards people under 17 years of age during the months of the summer. It is not eligible for a reduced fare, and it is only valid for the given time, regardless of whether it is used or not.

Note: The people that are entitled to a reduced fare are children between five and 11 years of age, and people over 65 years of age.

Going from the Buffalo metro to the Niagara International Airport is quite simple, even though there are no stations that would let you disembark directly on the airport. The express bus service is fast, cheap, and safe to use. It also connects the airport not only to downtown Buffalo, but also with other nearby locations, as well as this region´s main attraction, the Niagara Falls.

To board any of the buses of the express line towards the airport, you should head towards the Lafayette Square metro station. From this point, you will need to wait for the bus from the number 204 route, also known as the Airport-Downtown Express. Likewise, it is possible to board these vehicles at Seneca Station, since this bus line has a stop at both stations. This journey does not last over 30 minutes, but that depends on the level of traffic from that moment.

The travel fare is 2.50 dollars, and the vehicles that stop by at a frequency between 25 and 30 minutes from Monday to Friday. On weekends and holidays, the waiting times could last for up to two hours. In any case, you can check the arriving times for the buses on the Buffalo Metro’s website.

Likewise, if you wish to go to downtown Buffalo from the airport, the buses are the cheapest and most reliable option. You will find many stops outside of the building, in which you can board the bus lines that travel throughout the entire downtown region of Buffalo. You can also board other bus lines, which have as destinations the metropolis’ nearby communities. However, if you prefer a private means of transportation, there are taxi lines and rent-a-car agencies in front of the airport.

The Buffalo Metro is ranked as the 25th metro with the highest number of daily passengers in the world with its five million passengers. This system could potentially be expanded to significantly expand its already large daily ridership, which is why many firms have shown their interest to eventually expand it. One of them has been the CRTC group, which has chosen to educate the citizens and the governors of Buffalo about the inherent benefits of enlarging the city´s metro. In fact, thanks to initiatives such as this, the NFTA (the organization that manages Niagara Region´s public transportation) announced that they had a budget of 1.6 million dollars to do research to decide the viability of expanding the metro.

Some of these proposals were:

Near the Amherst Street Station, you will find the beautiful Buffalo Zoo, one of the city´s most visited touristic attractions, which is visited by almost 400,000 visitors per year. It was inaugurated on the year 1875, making it the third oldest zoo in the United States. It has a very interesting collection of exotic creatures, as well as a collection of 320 plant species from all over the world. Currently, this zoo is more than just a place to exhibit wild animals. It also acts a shelter that protects species in danger of extinction, and educational guides are offered to make people aware of the importance of protecting the Earth´s biodiversity.

Meanwhile, near the Delavan/Canisius College Station lies the Forest Lawn Cemetery, which dates back to 1849. Since its inauguration, this place has been used as a park, cemetery, crematory, and outdoor museum. Inside of this building you will find mausoleums, memorials and quite striking sculptures, which have been able to get the attention of the visitors throughout time. Also, the people in charge of the place organize events continuously, in which they make tours and expositions about the historical past of the most important characters that have been buried in Forest Lawn. In any case, you should find your visit to this place at least to be a curious experience. Therefore, it is highly recommended that you visit it if you spend a few days in Buffalo.