MARTA is the metro service of the city of Atlanta, the United States. It was inaugurated on June 30th, 1979. It has four lines and 38 stations. The metro service offers connections to buses from many companies. The metro makes direct trips to the Hartsfield-Jackson Atlanta International Airport. The metro opens at around 5:00 am and closes around 8:30 pm or 2:00 am depending on the station. Single rides in the metro cost $2.50. It is recommended that you check the schedule beforehand to avoid waiting too long for the next train. You are only allowed to eat at the metro’s stations. Out of all the stations, the most artistically appealing station is Peachtree Center. There will be new customer service offices at four stations. There are many attractions near Five Points Station and Dome-GWCC-Philip Arena-CNN Station.

Metros in the United States: MARTA (The Atlanta Metro)

The city of Atlanta is the capital of the state of Georgia in the United States. With a population of around 450,000 inhabitants, this is the most populated city of Georgia. Atlanta has a strong economy, which puts it in the top 10 cities in the United States with the highest GDP. Atlanta’s airport is the Hartsfield-Jackson Atlanta International Airport. This airport has the highest number of passengers in the world.

The Metro was proposed as a way to give transportation to the original five counties of Atlanta. The MARTA association was created on 1965 in order to build the metro. The process of obtaining the funds and the political support to create MARTA took over six years. Afterwards, the construction of the metro began on 1975.

There were some stations that were in the original plan that had to be discarded. Some of the stations that could not be built were going to be in the regions of Hopeville, West Highlands, North Druid Hills, Emory University, among others. 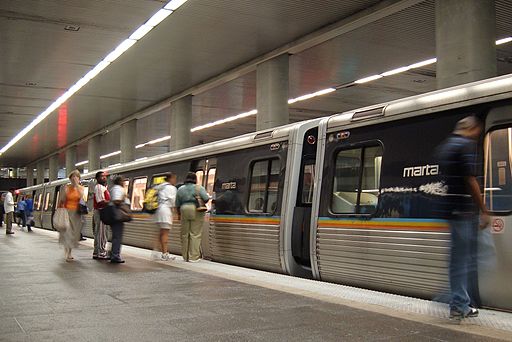 The MARTA has four lines and 38 stations. The lines are: the Red Line, the Blue Line, the Gold Line, and the Green Line.

- Red Line: It has the following 19 stations:

4) Buckhead: Located at 3360 Peachtree Road, Northeast, 30326. You can transfer to buses from Buckhead Uptown and bus 110 from MARTA. Parking services are not offered. It was inaugurated on June 8th, 1996. Over 2000 passengers per day use this station.

5) Medical Center: Located at 5711 Peachtree-Dunwoody Road, Northeast, 30342. There are over 250 parking spots. However, you cannot park your car for more than 24 hours. You can transfer to bus 25. It has two side platforms. There are six spots where you can park your bike.

6) Arts Center: It is located at 1255 West Peachtree Street, 30309. There are around 30 parking spots. There are connections available to buses from Atlantic Station, Amtrak, Xpress, CobbLINC, GCT, and MARTA buses 37 and 110.

8) North Avenue: Located at 713 West Peachtree Street, Northwest, 30308. There is no parking available. You can repair your bicycle at the nearby repairing facilities. It offers connections to the following buses: 1, 2, 26, 99, 102, and buses from Xpress, GCT, and CobbLINC.

10) Civic Center: Located at 435 West Peachtree Street, Northwest. There is no parking available. It offers connections to buses from Emory Shuttle, CobbLINC, Megabus, Xpress, and GCT. It has two side platforms.

12) Peachtree Center: Located at 216 Peachtree Street, Northeast, 30303. This station is underground. There is no parking nor buses available. It was inaugurated on September 11, 1982. Some scenes from the movie “The Heavenly Kid” were filmed here.

14) Garnett: It is located at 225 Peachtree Street, Southwest, 30303. There is no parking available. Although there are no MARTA buses available, there is a nearby Greyhound bus station. It was inaugurated on December 4, 1981. Over 1500 people per day use this station.

- Blue Line: This line has the following 15 stations:

1) Hamilton E. Holmes: This is one of the terminals of the Blue Line.

- Gold Line: It has the following 18 stations:

2) Brookhaven/Oglethorpe: It is located at 4047 Peachtree Road, Northeast, 30319. It has over 1400 parking spots. It offers connections to buses 8, 25, and 47. It is located above ground. This station was previously called Brookhaven.

- Green Line: It has the following 9 stations: 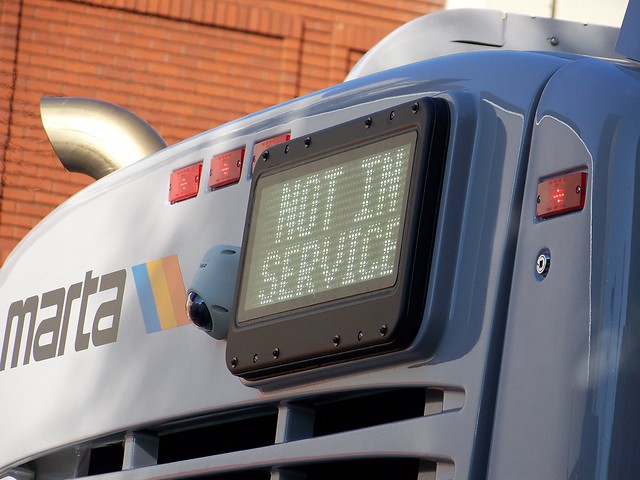 The metro goes directly to the airport. Airport station, the station from Red and Gold line, is located at the southern terminus of Hartsfield-Jackson Atlanta International Airport.

Note: Children below 47 inches of height travel for free.

- Cards: The card for the metro is known as the Breeze card, which costs $2. You can load as much cash as you want on it.

Learn the metro’s schedule beforehand, since waiting for a train can take longer than in most metro services in the United States.

A Rookie's Guide to Riding the MARTA Train

All the stations in the future will have speakers that announce on real time whenever a train arrives or departs. New customer service offices will be built at the following stations: Doraville, Bankhead, Airport, and Indian Creek.

Five Points Station and Dome-GWCC-Philips Arena-CNN Station will be used as reference points. Some of the touristic attractions near these two metro stations are the following:

1) Atlanta History Center: The trip lasts 10 minutes. From Five Points Station, board the metro in the Gold Line, and travel towards Doraville Station during five minutes. Get off at Midtown Station. Then, walk 450 feet from 10th Street towards the east. Finally, from Crescent Avenue Northeast, walk 170 feet towards 990 Peachtree Street Northeast.

2) Piedmont Park: The trip lasts 20 minutes. From Five Points Station, board the metro in the Gold Line, and head towards Doraville Station during five minutes. Get off at Midtown station. Finally, from 10th Street Northeast, walk 0.5 miles to Piedmont Avenue Northeast.

5) Michael C Carlos Museum: The trip lasts 30 minutes. From Dome-GWCC-Philips Arena-CNN station, board the metro’s Blue Line, and head towards Indian Creek Station during 8 minutes. Get off at Inman Park-Reynoldstown station. Next, walk to Inman Park-Reynoldstown Station-North Loop. Board bus 6 at Emory, and head towards Route 6-Lindbergh station during 15 minutes. Get off at North Decatur Road North East at South Oxford Road Northeast. Next, from North Decatur Road, walk to Dowman Drive. Finally, walk to South Kilgo Circle.