The Miami Metrorail is a 2 line system, with a total of 39,2 kilometers and 23 stations, inaugurated in 1984. Depending on the day of the week, it starts working between 5-6 in the morning and the service ends around 11-12 at night. It connects with the Metrobus, Metromover and the railroad known as Tri-Rail. The basic ticket costs 2,25$ and there's a lot of different rates for current users. You can get to the Miami International Airport using the Orange line of the Metrorail.

Cosmopolitan, multicultural, extravagant , tropical; these are some of the most used adjectives when it comes to Miami city. Considered as one of the most important seven cities in The United States, it offers locals and tourists, a wide amount of activities to do, with a great variety of plays, night clubs or concerts of the artists of the moment.

In its metropolitan area there are about 5,5 million people, which's life pace is, as in most big cities, very fast. That without taking into consideration the long distances that exist between one place and the other. Plus, it's appreciated by many as Latin-American's capital, because of the great amount of hispanic-speaking habitants in the Metropolis. Because of this, the mobility demand is enormous. Reason why, in the year 1971, it was recommended to city hall to build a massive transportation system that tended to the citizen's needs.

However, it wasn't until 1980 when the building works started, after bringing the proposal to all responsible authorities for them to approve the estimate. Three years later the first section, named Metrorail, was finished , counting with 10 stations. In spite of that, it didn't went into commercial operations until next year, in 1984. The first day of service it was completely free. It was thought out to tend to Miami's suburban zones, having as main objective that its citizens park their vehicles at the different stations and use the trains, reason why many of the stops have big parking lots.

Currently, the system moves more than 70.000 passengers daily between its two lines, going over the city form north to south and connecting at the middle with several complementary means of transportation. The iconic monorail Metromover is famous for appearing in many movies and tv shows set in the city.

With a total of 39,2 kilometers, the Metrorail lends its service from Medley village to north of Miami-Dade county, up until Kendall district on the south of the city. It's composed by two commercial lines, the Green and the Orange, together they add a total 23 stations. They both share the route on 15 stations, from Dadeland South Station terminal to Earlington Heights Station, where the Orange line detours towards the city's airport heading West, and the Green line keeps going North.

Dadeland South station: Its opening is set in may 20th , 1984. It's located in the intersection between Dadeland Boulevard and Datran Boulevard; about three blocks away from the Dadeland Mall. It's served by the Green line and the Orange line.

Dadeland North station: Inaugurated in may 20th 1984, it's located in the Dadeland area; specifically on the intersection between South Dixie Highway route and Southwest 83rd Street, two blocks away from Kendall Drive. Lines Green and Orange serve this stop.

South Miami station: founded on may 20th, 1984 in South Miami. It's located in the intersection between South Dixie Highway and Sunset Drive street, two block away from Red Road. Both subway routs operate in this station.

University station: Located in the neighborhood Coral Gables, south of Miami, at the Ponce de León boulevard, right between South Dixie Highway and Mariposa Court. It opened to the public on may 20th, 1984 and it serves both routes in the system.

Coconut Grove station: It lends service to Coconut Grove neighborhood habitants. It's located in Grapeland boulevard, between South Dixie Highway route and West 27th avenue. It began its operations in may 20th 1984 and it's served by the two Metrorail lines.

Vizcaya station: It's been running since may 20th 1984 on the neighborhood called The Roads. It's located between Southwest First avenue and 32nd Road street. Lines Orange and Green lend service at the stop.

Brickell station: Its opening was more recent, may 26th 1994. It serves the financial district at Brickell, on the center of Miami, being located between SW 1st avenue and SE 11th street. Routes Green and Orange lend service at the station.

Government Center station: Opened on may 20th 1984, it serves the Government Center district at the Miami Downtown. Located at the intersection between Northwest First stret and First avenue, it's tended by both lines of the system.

Historic Overtown/ Lyric Theatre station: Also at the center of the city, its opening goes back to May 20th 1984. Its located between Northwest Sixth street and First avenue, south of Overtown neighborhood. It's served by Green and Orange lines.

Culmer station: The station lends service to Spring Garden neighborhood habitants, its located between Northwest 11th street and Seventh avenue. It opened its doors on December 17th 1984, being served by both routes in the system.

Santa Clara station: It was founded on December 17th 1984, to tend to the residential neighborhood Allapattah. The station is located between Northwest 12th avenue and 20th street. Both Metrorail lines operate in it.

Allapattah station: As the one before, it serves the Allapattah neighborhood, where it was inaugurated on December 17th 1984. Both subway lines go through this stop, located between Northwest 12th avenue and 36th street.

Earlington Heights station: It was built on Brownsville neighborhood, lending service since july 2012. It's located on Northwest 21st avenue, in the intersection with Airport Expressway. It's the last station transited by both routes.

Miami Airport station: It's one of the most recent stations is the system, where not only does the subway operate but also many bus lines. It's located on West 37th avenue, near Northwest 21st street. It's only served by the Orange line, being at the same time, a terminl station. It has been running since July 28th 2012.

Brownsville station: It tends to the Brownsville neighborhood, in the intersection of Northwest 27th avenue and 52nd street. It's traveled only by the Green line. Its opening goes back to May 19th 1985.

Dr. Martin Luther King Jr. Plaza station: Open since May 19th 1985, it lends service to Gladeview neighborhood, between West 27th avenue and North 62nd street. It only counts with the service of the Green line.

Northside station: Located between Gladeview and West Little River neighborhoods, on Northwest 31st avenue and 79th street, it's served by the Green route. Opened in May 18th 1985.

Tri-Rail and Metrorail Transfer station: It tends to the Hialeah area, on East 25th street with 11th avenue. Trains on Green line lend service to this station, inaugurated on June 5th 1989.

Hialeah station: It also serves the Hialeah area, between East First avenue and 21st street, south of the Hialeah Park Race Track complex. In this line only the Green line operates and it was opened on May 19th 1985.

Okeechobee station: It's located on Medley, between Northwest 77th street and 79th avenue. It's the terminal station on the green line, it opened its doors on May 30th 2003.

The Miami subway system lends its service from Monday to Sunday, setting its schedule this way: 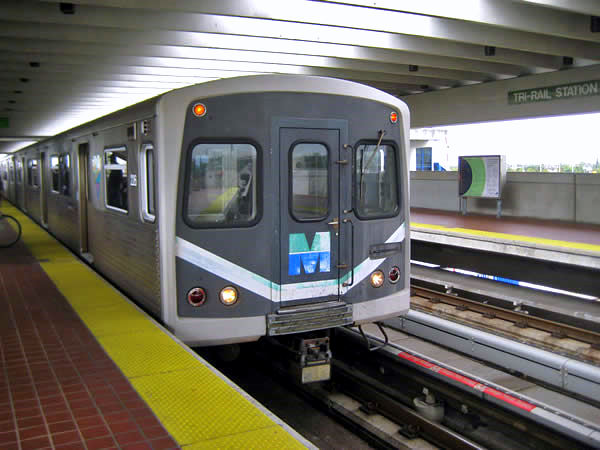 To use the Metrorail the user must get an EASY Card, this card's value is up to 2$, or an Easy Ticket pass. You can buy both options at the vending machines located in every station, authorized sale locals or at the Miami Transport Services Center. The ticket and the card have different sale modes, although the ticket is not rechargeable. The flat rate to travel on the subway is $2,25 but it counts with several attractive special rates that could work for frequent users. They're classified as follows:

The Miami subway offers a direct connection to the terminal of the Miami International Airport. To get there from the city's downtown, you just have to take the Orange line on the Metrorail heading north. After approximately 16 minutes of ride, the passenger will arrive at the final station, the Miami Airport station, which has a direct transfer to the airport.

In the same way, if the passenger wishes to travel downtown using the subway, he or she will only have to get a ticket in the dispensers located at the station to board the trains on the Orange line, these trains connect with the Green line and the Metromover. It's important to point out, that in the subway stop several Metrobus routes lend service, complementing the train's route.

The Miami subway was designed with the intention of expanding its routes constantly. Some of the expansions proposed so far are the following:

Biscayne corridor/ Northeast: With 21,9 kms this route hopes to connect the center of town with the Aventura area.

East-West Corridor: With 27,7 km of tour, this route is meant to join downtown with the Miami Port, on East, and also with the Florida International University campus on West.

34 km extension of the Green line, South, tending to the Florida City area.

Currently city hall has the expanding of the Orange line as a priority, with planes of connecting all expansions by the year 2030 and depending of the federal budget available.

Tourism near the subway

Near Vizcaya station, you can find the Patricia and Phillip Frost Museum of Science, an important museum, planetary and aquarium in Miami city. It was formerly known as the Junior Museum of Miami, when it first opened in 1949. During its beginnings, the exhibitions consisted of items donated by local citizens and others given by the Florida University. Then, after being relocated, it was named Museum of Science and Natural History, in 1952. It was in 2015 when its name was modified for the last time, to the current. It's ideal for science and cosmos lovers.

On the other hand, in the Government Center station, users can approach the Miami History museum. A 70.000 square foot complex that holds more than a million historical images and thousands of XVII and XVIII century artefacts. It's considered as the history museum with the most relevance in the south of Florida. Amongst its permanent exhibitions the famous Tropical Dreams: A People's History of South Florida is included, which makes a historical tour of the towns that have occupied the Southern state of the American union; highlighting the transcending facts that made the territory what it is today. Including the first native settlements, the Spanish conquering periods, World War II, among other big events. It's an ideal place for history lovers, located in the very Downton of Miami. Plus, in the complex also take place different conferences, historic investigations publications along with help aid services for students that require the use of any of its copies.

Map via www.miamidade.gov
See map full resolution. It may take a little bit to load.