Cleveland has a public transport system known as ‘The Rapid’. The RTA Rapid Transit has a system length of 60 km, and serves 52 stations with 3 lines: red, blue and green. About 4 million people use the system every year. It is open every day through most of the day (22 hours), and wait times between trains depend on the line: from 5 to 30 minutes. The cheapest ticket costs $2.50 USD. The RTA is directly connected to the airport.

Cleveland is the second largest city in Ohio, a state in the United States. It has more than 2 million people living in its greater metropolitan area. It is the county seat of the Cuyahoga County, an important manufacturing center that goes a long while back, to the start of the 20th century, its industrial roots developing thanks to its strategic geographical location.

Many railroad lines pass though the city, connecting several important destinations across the United States and Canada. Despite its industrial background, Cleveland, as with many other modern north American cities, is migrating to a more flexible economy focused on services, with many banks, financial institutions, medical facilities and insurance companies.

This renovation process and the new ways the city was making money led to an ever-increasing demand for transportation, a natural phenomenon to any fast-growing city. In consequence, mass public transport projects were considered, and by the year 1958, a heavy-train line was inaugurated, the service now known as The Rapid.

Another older line (dated back to 1913) that provided service as a light rail train was integrated into the newer line. This first Cleveland Interurban Railroad (CIRR, as it was known) was conceived as a way of connecting residential suburbs where workers lived and the industrial zones and developments they attended to, aiming to reduce commute times and boosting punctuality rates. The streetcar system was renovated in 1930.

The heavy train started its commercial operations with a system length of about 30 km. It was integrated into the other existing infrastructure, connecting it with some stations of the light trains and incorporating bus lines so it could provide service to the maximum amount of people. 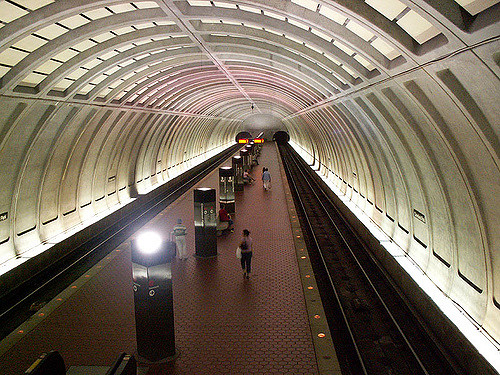 The RTA Rapid Transit system that operates in the city of Cleveland has a current system length of about 60 km, and services 52 stations. The Cleveland metro has an average of 10,800 daily users, and about 3.7 million each year. It operates 3 commercial lines: a heavy train (Red line), and two light rail trains (Blue and Green lines).

This line has a total of 40 operative wagons that run between 18 stations distributed along a 31-km route.

It goes from the Hopkins International Airport to the Windermere neighborhood, to the east of Cleveland. The Louis Stokes terminal is located there. This line runs all days of the week, about 20 hours a day. Trains run every 7 to 15 minutes. According to the GCRTA (Greater Cleveland Regional Transport Authority), the company that runs the system, the Red line moves about 12% of the total passengers they provide service to.

It was inaugurated in the decade of 1950, and was the extended in 1968 so it could service the airport. Back in the day, it was the first rapid transit system in the western hemisphere to be connected to an airport terminal.

The Blue and Green lines have a commercial rolling stock comprised of 34 vehicles that serve 34 stations distributed along 29 km of track, starting in the eastern suburbs. It was in 1913 that the first trains commenced operations, and the system has undergone significant changes since. It was not until 1996 that the lines were extended towards the waterfront area.

This newer extension connects the Tower City station with the Flats East Bank, and further along the line services FirstEnergy Stadium (home of the Cleveland Browns), the Great Lakes Science Center, the Rock and Roll Hall of Fame and Museum (both through the East 9th – North Coast station). The terminal, South Harbor station, serves the Cleveland Burke Lakefront Airport and the Cleveland Municipal Parking.

These light rail lines account for a total of 8% of the total users that RTA Rapid Transit serves. An additional 12% is served by the Red Line, while the other 80% moves by bus and trolleybuses that the company also manages.

It's a blue and green lines extension that goes from Tower City to South Harbor Station.

The trains at the Rapid Transit of Cleveland operate most of the day: 22 hours without stop. The rest of the day is reserved for maintenance and inspection services.

The Red line functions from 3:15 a.m. to 1:45 a.m., Monday to Friday. The trains arrive at the stations every 10 minutes in rush hours and every 15 minutes when there is less demand. 22 buses are available from 1:00 a.m. to 4:00 a.m. (when the Airport station is closed) to keep the connection with the airport running at all times.

The light rail lines provide their services from 3:40 a.m. to 1:00 a.m. every day of the week, without exceptions. During rush-hour, trains run every 10 minutes, but the wait is increased to 30 minutes at times when demand is very low. This wait time is halved where both lines converge, from Shaker Square to Tower City. They run every 5 minutes in peak hours and every 15 minutes the rest of the day.

The Waterfront extension is served by three trains that run from 6:50 a.m. to 7:05 p.m., with an average of 15 minutes between trains on the Westbound trains. On the Eastbound, trains start at 4:08 a.m., but the next one leaves 50 minutes later. They continue service until 12:50 a.m. with different intervals between trains according to the time of the day.

On weekends, trains from the Green and Blue lines run every 30 minutes. Stations between Tower City and Shaker Square are served every 15 minutes. The Waterfront terminal (South Harbor) is served from 9:18 a.m. to 6:48 p.m. 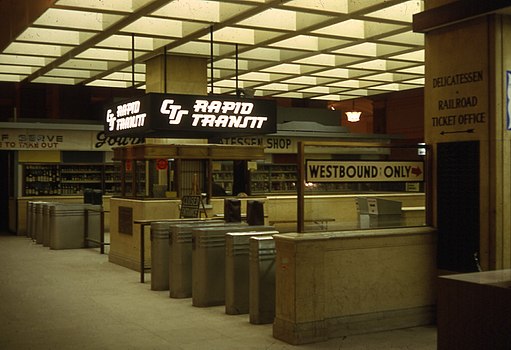 The public transport system in Cleveland is very well-connected. All three lines are linked to the extensive bus network that runs through the city. Most stations have bus stops in their vicinity. They are detailed below:

There are several plans that people can buy according to their transportation needs: from 5-trip Fare Cards, Daily Passes that allow the user unlimited travel for the duration of the pass, 7-Day Passes (same unlimited deal as above) to Monthly Passes. They can all be purchased by the public at Ticket Vending Machines.

Special discounts are also available for Seniors and the Disabled. Students also have special pricing, while children under 6 years of age travel for free.

It is important to note that all passengers must have their tickets or valid travel cards with them before boarding any train. Tickets may be bought at any TVM (Ticket Vending Machine) at any station.

At Tower City station, users can also ask for assistance from support personnel who seek to better the user’s experience at the system. They can help the costumer choose the appropriate travel plan for each personal case, as well as clear any doubts regarding the system or payment options and solve any problems that may arise.

Once the user has paid the fare, they will be granted access to the ‘Fare Paid Zone’, a reserved area within all commercial stations of the Rapid Transit system specifically built for passengers.

RTA personnel has the authority to demand your ticket or fare card for validation, be it at the stations or inside the trains. In case you don’t have a valid ticket with you, a Violation Fare will be assessed, and any recurrent transgressions may face criminal prosecution.

General: it costs $5.50 USD, and can be used an unlimited amount of times for an entire day on any train or bus service provided by the RTA.

Senior / Disabled: it has a price of $2.75 USD, and has the same benefits mentioned above.

Students: it costs $4.50 USD, and grants access to any train or bus line the RTA manages, for an entire day.

General: it costs $25.00 USD, and can be used an unlimited amount of times for an entire week on any train or bus service provided by the RTA.

Senior / Disabled: it has a price of $12.50 USD, and allows the user to travel as much as needed on any of the bus or train lines the RTA operates, for a 7-day period.

General: it is valued at $95.00 USD. Users may use this pass for an unlimited number of trips for an entire month, on any train or bus service provided by the RTA.

Senior / Disabled: it has a price of $48.00 USD, and allows the user to travel as much as needed on any of the bus or train lines the RTA operates, for a month.

Any act that involves harassment of any nature, intimidation or violence of any type against any other passenger is strictly prohibited. Security personnel may intervene if necessary, and may also prosecute criminal charges.

There have been some proposals to loop the Waterfront Line back to the city downtown through Tower City station, but it seems unlikely so far, and information is scarce.

On the other hand, with the recent completion of the Health Line trolleybus, a project may be developed to connect the Rocky River and Euclid neighborhoods through a new heavy rail line.

An additional proposal is to extend the Waterfront line eastwards along the lakefront, with the construction of a light rail station that would serve the city centre.

The RTA Rapid Transit system offers all its users the possibility to reach the Cleveland Hopkins International Airport directly through its heavy rail line (Red Line). Airport station is the western terminus and is located below the baggage claim level.

To reach the airport from downtown Cleveland, one must first reach Tower City station or any other Red Line station, pay the corresponding fee ($2.50 USD for a single ticket) and board the train heading to Airport station (westbound trains). The trip takes about 30 minutes from Tower City, and trains leave every 15 minutes. Upon arrival at Airport station, it is only a matter of getting off the trains and walking up to the upper levels, where the airport is located at.

To reach the city from the airport, users must only reach the station. It is located at the lower floors, beneath the baggage claim level. Mechanical stairs and elevators are readily available. Once the fare is paid for, one must wait at the quays and take any train, as they will only go towards the city from this station.

Located very close to the Red Line’s Little Italy – University Circle station, is the impressive Cleveland Museum of Art. It is one of the most important museums in the country. It has a large array of collections distributed in 16 different departments, ranging from Native American art, Chinese and Korean expositions, Islamic art, medieval pottery and woodwork, to photography and sculptures. It is a must-see within the city, with famous paintings from Goya, Van Gogh and Modigliani. If that were not enough, it also offers a stunning architecture, a mix between the minimalist and avant-garde movements.

On another hand, the famous Jack Cleveland Casino is located in front of the Tower City station, the main transport hub for all three lines in the system (Red, Green and Blue). The casino is very well known for being a lively place dedicated to entertainment. It is open 24 hours a day and offers gambling, live concerts and shows, among many other things.