The MiniMetrò is the metro service of Perugia, Italy. It was inaugurated on January 29th, 2008. It has one line and 7 stations. It makes connections with buses from Busitalia and trains from Trenitalia. You can go from the airport to the closest metro station by boarding bus E007. The departure frequency of the trains is around three minutes. Ticket prices start from €1.50. As a tip, do not bring much luggage. Smoking is prohibited in the metro. Jean Nouvel was the designer of the stations. A new line will be built. You can visit attractions such as Porta Marzia within 20 minutes by using the metro.

Perugia is a city in Italy, and is the capital of the province of Perugia and of the region of Umbria. It has a population of approximately 170,000 people. The teacher of the famous Renaissance artist Raphael was born near Perugia. One of the most important economic activities in the city is the manufacturing of chocolates. Perugia is famous for the Umbria Jazz Festival. The city is also famous for its medieval art. There are three airports close to this city: San Francesco d'Assisi Airport, which is within Perugia, Milan-Malpensa Airport, and Rome's Airport.

The metro was proposed during the early 1990s. Then, in 1998, a company called MiniMetrò S.P.A was created with the sole purpose of building the metro. The goal of the construction of the metro was to offer rides to Monteluce from Pian di Massiano. Some people were against the idea of building the metro since Perugia is a geographically small city. Therefore, a metro service seemed useless for the city.

Nevertheless, the metro was inaugurated on January 29th, 2008. The metro's final design was accepted by MiniMetrò S.P.A on October 2002. The metro's construction began on 2003. Over 9,000 people rode the metro during its first week.

The Perugia Metro only has one line, comprised of 7 stations. The stations are the following:

One of the metro's terminals, and the first station of the metro's network. The metro's main engine is located in this station. The station is close to the historic center of Perugia. To reach the station, you can use the escalators or the elevator from Via Oberdan. Two nearby points of interest are Corso Vannucci and Piazza Matteotti.

This station is located in the community of Via Mario Angeloni. There are footbridges, many escalators and elevators to allow an easy access to the station.

This underground station is located in Viale Pellini. Some places of historical importance close to this station are Piazza Morlacchi, Via dei Priori, and San Francesco. Additionally, by using the metro, you can reach other important places such as Liceo Classico Annibale Mariotti, Accademia di Belle, Arti Pietro Vannucci, the University in Via Pascoli, Medieval Torre degli Sciri, the schools of Don Bosco, Teatro Morlacchi, and the future of the Auditorium di San Francesco al Prato.

This station is located near schools, shopping centers, and public and private offices. This region is one of the most populated regions in Perugia.

This station is also located in one of the most populous regions of Perugia. It is surrounded by schools, offices, and commercial areas. This station is located 100 meters from the Perugia Railway Station, which is the main train station in Perugia.

Its location is in Chico Mendez. Among the points of interest close to this station are the Mario Spaglioni Hostel, the Uci Cinema, and the Bam recreational facility. Here, you can make connections with buses.

The second terminal of the metro. Here is located the equipment to change the course of the metro. This station has over 2900 parking spots. There are also buses in this station where you could make a connection. Additionally, there is a shopping center in the station. This is an important station since it has a workshop and a warehouse for the trains.

The metro makes connections with the buses from Busitalia-Sita Nord S.R.L., and the RV and REG trains from Trenitalia.

The metro does not go directly to San Francesco d'Assisi Airport. Instead, you will have to ride a bus to the closest metro station, which is the Pincetto station. From the airport, walk to S. Egidio Aeroporto. Board bus E007 from Busitalia, and travel for 30 minutes to Bus Terminal (PG.) After 17 stops, get off at V. Roma. Finally, walk 560 meters to Pincetto station.

- Maintenance: During a period of two weeks each year, the metro undergoes maintenance. The metro is also tested during this period of time to check that the train runs smoothly. In other words, during these two weeks, the metro service is closed. Maintenance is usually done during August. Passengers will be notified of the metro's maintenance schedule at www.minimetrospa.it (only in Italian.) If you want to call a customer service representative to check when the metro will undergo maintenance, call +39 075 505 8753.

If the metro service is interrupted for any other reason, passengers can use the bus service instead.

Tickets are called Up Tickets. They offer rides to the following services alongside the metro:

UP tickets can be bought at vending machines at metro stations. They can also be bought at newsstands, authorized shops, and booths at Piazza Matteotti and Pian di Massiano.

If you need to validate your ticket, get a replacement of your ticket, or renew a subscription, use the intercom next to the vending machines to contact the metro staff. If you need a replacement for your 1 Day Ticket or the Multiviaggi 10 Ticket, go to a customer service office of Busitalia Sita Nord S.R.L. at Piazza Partigiani, Strada Santa Lucia and Fontivegge.

You can pay for the tickets or the subscriptions with the following credit and debit cards: V Pay, Visa, Visa Electron, MasterCard, Pago Bancomat, and Maestro.

- Subscriptions : They are divided into: Network; Monthly, Quarterly, and Annual; Integrazione Anuale Scolastico (€89); and University Students.

The description for some of the subscriptions are the following: 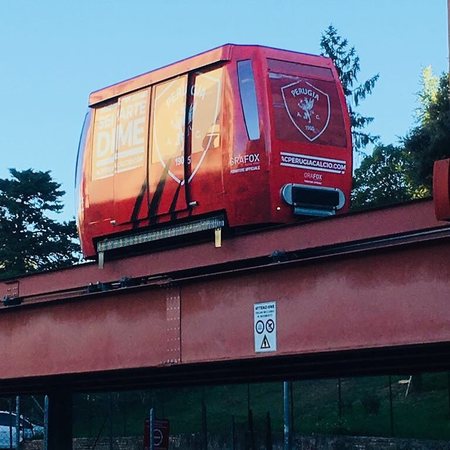 You can bring pets to the metro. However, you must follow these regulations:

Pian di Massiano station will be used as a reference point. To go from this station to the closest attractions via the metro, follow these instructions.

1) Porta Marzia: The trip lasts 18 minutes. From Pian di Massiano, board the MiniMetrò, and travel for 13 minutes towards Pincetto. After six stops, get off at Pincetto station. Finally, walk 290 meters to Porta Marzia, Via Marzia, 06121.

2) Fontana Maggiore: The trip lasts 20 minutes. From Pian di Massiano, board the MiniMetrò, and travel for 13 minutes towards Pincetto. After six stops, get off at Pincetto station. Finally, walk 460 meters to Fontana Maggiore, Piazza IV Novembre, 1, 06123.

3) Passignano sul Trasimeno: The trip lasts 40 minutes. From Pian di Massiano, board the MiniMetrò, and travel for 7 minutes towards Pincetto. After three stops, get off at Fontivegge station. Then, walk to Perugia Railway Station. Board the RV train from Trenitalia, and travel for 30 minutes towards 3158 Firenze S. Maria Novella. Finally, after four stops, get off at Passignano Sul Trasimeno.

6) San Lorenzo: The trip lasts 20 minutes. From Pian di Massiano, board the MiniMetrò, and travel for 10 minutes towards Pincetto. After six stops, get off at Pincetto station. Finally, walk 460 meters to Piazza IV Novembre, 06100, and find the Church of San Lorenzo. 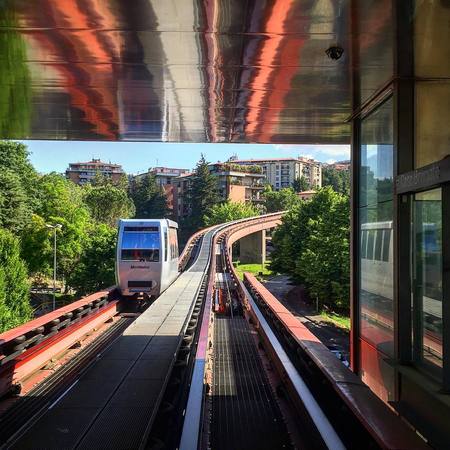 8) Galleria Nazionale dell'Umbria: The trip lasts 19 minutes. From Pian di Massiano, board the MiniMetrò, and travel for 13 minutes towards Pincetto. After six stops, get off at Pincetto station. Finally, walk 360 meters to Palazzo dei Priori, Corso Pietro Vannucci, 19, 06100.

10) Sant'Arcangelo: The trip lasts 35 minutes. From Pian di Massiano, board the MiniMetrò, and travel for 7 minutes to Pincetto. After three stops, get off at Fontivegge station. Board bus C from Busitalia, and travel towards P. Universitaria for 12 minutes. After 16 stops, get off at V. Innamorati 3. Finally, walk 560 meters to Via del Tempio, 06123.