Chennai is the capital of the indian state of Tamil Nadu. It's the seventh largest city in India to incorporate a subway system.

Chennai is a 7.5 million inhabitants city that has grown rapidly generating large concentrations, congestions and complicated street traffic. So there really was a need for an urban rail system and the Government of Tamil Nadu planned to build the Chennai Metro Rail Project. The Chennai Metro Rail service is integrated with buses and suburban trains.

The project was awarded for its implementation and operation to the Chennai Metro Rail Corporation Limited (CMRC).

The first section of the Chennai metro project started operating on June 29, 2015. The beginning of the project dates back to 2005 when the local government began to consider its construction. Designed for over a decade, on a budget of 14,000 million rupees suffered several bureaucratic slowness and several deadlines until finally was inaugurated. 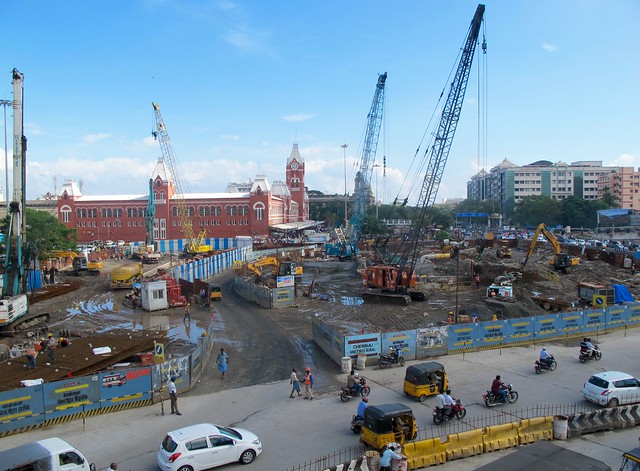 Phase II of the Chennai Metro Rail project will develop five more corridors. According to the project summary, in 2003, the executive priorities were the construction and design of the corridors 1 and 2 in Phase I. Phase II consists of:

Frequency in peak hours is 10 minutes. Rest of the hours is 15 minutes including weekends.

Since opening the Chennai Metro adopted fixed rates according to the distance traveled. So the minimum cost is ₹ 10 and the maximum can be up to ₹ 40. This makes it the most expensive from all over India, including the capital New Delhi.

There are two forms of payment, smart cards and tokens. You can buy them at every station. Remember to drop the token at the gates which will automatically open the exit doors.

To get one Store Value card you need to pay a refundable deposit for the card. The deposit is Rs.50 and also you will have to recharge a minimum of Rs.50. Then the minumum recharges are Rs.100. Maximum top-up is 3000 rupees. Your credit will expire after a year after the last recharge. By using the store value card you will get a 10% discount on fares in every journey. Another benefit is that you wont need to stand in queues for tickets. The card is tranferable and can be bought and recharged from automatic vending machines at the stations.

It's ideal for visitors for a limited period. It cost a fare of Rs.100 plus a Rs.50 Refundable deposit. Special features are unlimited rides, valid for one day only. Can be purchased on all days. Card to be used within 30 days from the date of purchase. Can be buyed and recharged from the automatic expending machines at the stations.

It's for citizens and other residents who use the metro daily. You must select two fixed stations, origin and destination.

There are several types

You can obtain a discount of 20% from normal fares. You have to leave a 50 rupees deposit on surrender of the card. Trip cards can be bought and recharged from the automatic vending machines at the stations.

There are parking facilities available at Koyambedu, Arumbakkam, Vadapalani, Ashok Nagar, Ekkattuthangal, Alandur. However parking is not free. Cars have to pay 10 rupees every 3 hours and 200 rupees if the vehicle stays more than business hours (6:00-22:00). Motorcycles pay half price. There also exists monthly passes. You have to be aware that parking is at owner’s risk and no refund is permissible on parking charges

In the initial Chennai Metro Rail project, each train should have a first-class convoy in the front. The fare would be twice the economy class. Finally it was not implemented

Among the penalties there one month in prison and a fine of 50 rupees to anyone trying to ride on the roof of the train. Map via
See map full resolution. It may take a little bit to load.