The Hyderabad metro is an underground metro system that serves the city of Hyderabad, India. It currently has 24 stations, divided between 2 lines, extending a total of 30 km (19 miles). Most of the system is still under construction and upon completion, it will have 64 stations on 3 lines.

Overall, it is a sophisticated metro. Its construction began within the last decade and it was inaugurated on November 29, 2017, making it one of the newest metros in the world. Ticket fares vary according to the distance. The shortest trip costs 10 rupees ($US 0.15) and the system schedule is from 6:00 am to between 10:00 pm and 12:00 am, depending on the line.

The metro system does not travel directly to the airport.

At the root of the geographic map restructuring, Hyderabad is currently the capital of Telangana state and while this transition has been finalized, Hyderabad also continues to function as the capital of Andrha Pradesh state.

The vestiges of past conquests and colonization can be found in the city’s most touristy areas in which the possibility of being inspired by history exists for whomever visits.

Hyderabad is also recognized for its cinematography and medical manufacturing. Equally outstanding are the city’s biological molecular centers that can be found on this cutting-edge continent along with the general production of both marketed and non-marketed technology products in the Genome Valley.

Despite English and Hindi being openly used, each region has its own distinct languages. In Hyderabad there are two official languages: Telugu and Urdu. Temperatures in the region don’t waver much since the climate is tropical. During the warm months, it is between 29 and 33°C (77 and 91.4 °F), while cold months range between 21 and 25 °C (69.8 and 77°F). 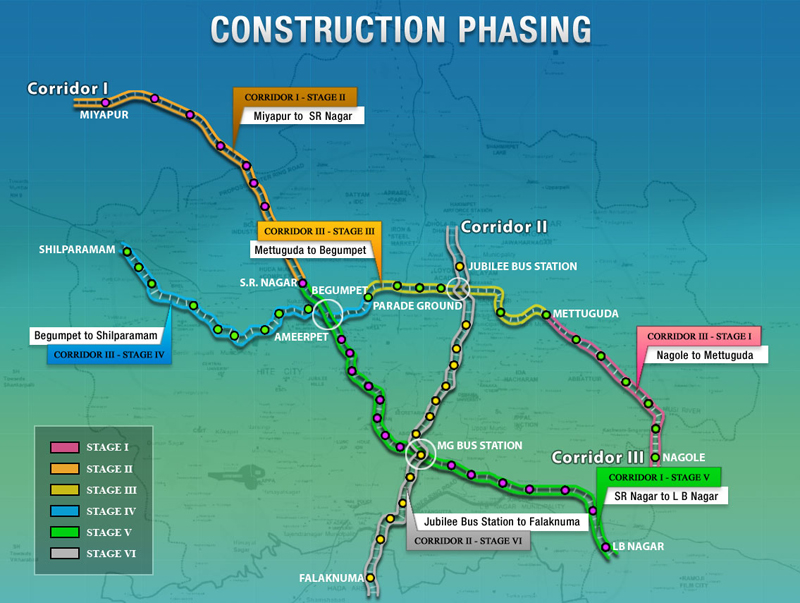 The Hyderabad metro is a public transportation system that can be found in its initial phase. The current operation is 30 kilometers (18.6 miles). With the completion of the first part, it is expected to reach 66.56 kilometers (41.36 miles) which will instantly make it a largely expanded system.

It is an extremely recent metro, having just been inaugurated in 2017. It has a mainly elevated route with large platforms above its tracks.

Since the system was founded just a little while ago, it has only one train model, manufactured by the Japanese company Hyundai Rotem. The trains measures 3.2 meters (10.5 feet) wide and 4 meters (13.1 feet) high, with 4 doors per train car. The trains are automatic.

The average number of passengers circulating throughout the metro yearly is 720 thousand while daily estimates are approximately 60 thousand. The Hyderabad Metro operates under the Hyderabad Metro Rail Ltd. (HMRL). This company mainly has private stocks, although the state government also participates in its capital.

India is a country experiencing constant population growth and most of the people live in urban areas like Hyderabad. Therefore, the need to provide a metro system to the cities has surged. Hyderabad and its twin city Secunderabad developed the Multi-Modal Transport System (MMTS) in 2003, which functions as a commuter train from both cities.

However, due to system deficiencies and deterioration over the years, the need for an urban metro soared. In 2003, system planning began as the second stage of the Modal System. The Hyderabad Metro was outlined as an ambitious system that developed into a far-reaching transportation mode in no time at all.

The Hyderabad Metro is an urban transportation system with extensive plans to have 66 stations assembled on five lines. The system’s first phase consists of three lines and is partially operating. Presently, only two of them offer commercial service. These lines are: 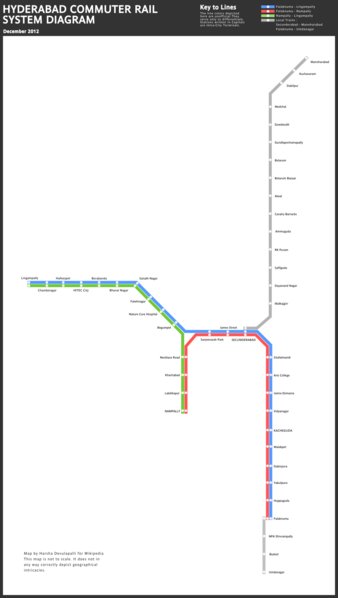 This line was inaugurated along with the system on November 29, 2017. As the first line, it was awarded the color red. In total, the line has 29.27 kilometers (18.2 miles), assembled across 27 elevated stations. However, it currently only has 13 functioning stations: Miyapur, J.N.T.U College, K.P.H.B. Colony, Kukatpally, Balanagar, Moosapet, Bharatnagar, Erragadda Road, ESI Hospital, S.R Nagar y Ameerpet, this last station connects to the Blue Line. This line peaked with the arrival to L.B. Nagar (Bahadurguda).

Like the Red Line, the Blue Line was also inaugurated with the opening of the system on November 29, 2017. It was assigned the name blue as the color to distinguish it from other lines. Its total length will be 29 kilometers (18 miles), made up of 24 stations, of which currently only 17 have been inaugurated. These stations are: Nagole, Uppal, Survey of India, NGRI, Habsiguda, Tarnaka, Mettuguda, Secunderabad, Parade Grounds, Paradise, Rasoolpura, Prakash Nagar, Bengupet and Ameerpet that connects to the Red Line. When this line is complete, it will reach Raidurg.

Hyderabad’s metropolitan area has various types of public transportation systems that run within the city and additionally connect to other locations. The Multi-Modal Transportation System, one of the most pertinent connections, is a suburban transportation system with three lines connecting the city with other village populations. This system connects the Red Line’s Bharat Nagar station and Begumpet station and the Blue Line’s Parade Ground station.

Buses are another one of the city’s largest transportation systems. In Telengana, they are managed by the government run company, Telangana State Road Transport Corporation (TSRTC). This system provides bus lines to the city and suburbs. The company has various mid-level transportation services known as Super Luxury, Luxury, and Express and premium level services known as Vajra, Vennela, Garuda Plus, Garuda and Rajadhani. One of the stations connecting with the bus system is Miyapur on the Red Line terminal.

Another one of Hyderabad’s large transportation systems include the long-distance trains operated by Indian Railways. The city’s major long-distance train stations are Secunderabad, Hyderabad, Deccan, Kachiguda, Ligampally, Falaknuma and Begumpet. They connect to the Blue Line metro.

Connections with the airport

The Rajiv Gandhi International Airport is charged with serving the demands of Hyderabad. It is located in the village of Shamshabad, 24 kilometers (15 miles) south of the city. Founded in 2008, it is a modern airport, recently created to replace the old Begumpet airport. The airport is managed by a public-private consortium and is currently dedicated to private and military flights. The traffic area here is India’s sixth highest. This is also the site of a large solar energy plant.

The metro system does not go directly to the airport terminal since it is such a long distance from Hyderabad. However, an extension from Falaknuma to the airport is being considered during Phase II of construction. Currently, the most practical connection to the airport is from the Pushpak – Airport Liner bus, run by TSRTC. The bus line connects to the airport at various metro stations such as Uppal, Begumpet, J.N.T.U. College, Secunderabad y Tarnaka.

Overall the Hyderabad Metro has uninterrupted service between 6:00 am to 10:00 pm and varies in frequency. The first train on the Red Line departs from Miyapur station at 6:00 am, while the last train arrives at Ameerpet station at 10:48 pm. During the day, trains run every eight minutes on the Red Line with a variation of two more minutes or less. The Blue Line varies as well. Similarly, the first train leaves from Ameerpet station at 6:00 am while the last train arrives at Nagole station at 11:30 pm. Although it begins with a frequency of 12 minutes, it quickly shifts to 15 minutes, a timeframe that it maintains all day, until closing.

As stated above, the fees are managed according to the range of kilometers. They are the following:

Passengers can purchase any of their trip tickets in the form of a token or card at automatic ticket vending machines. They can also purchase transfers on their accounts via smartphone.

However, purchasing single tickets isn’t the only option. Contactless Nebula cards can be purchased at the Nagole, Tarnaka, Prakash Nagar and Sr Nagar station. This card cost 200 rupees ($US 3.08), 100 rupees ($US 1.54) of which 100 rupees are applied to the trip cost and the other 100 are applied as a security deposit.

Hyderabad Metro’s transportation systems have established rules of interaction and conduct among its riders. Some of these include the following:

Throughout its planning stages, the Hyderabad Metro is a public transportation system that has come to be recognized as an enormous mechanism for mobility. The plan’s two large phases guarantee metro access to the entire city. Construction is in the first phase, which for the time being, has just reached stage three of six. The expectation is that the other three will be inaugurated by the end of 2018 and that the total completion of the 66.56 kilometers (41.36 miles) in phase one will also include the inauguration of the Green Line that extends 10.06 kilometers (6.3 miles).

Once the first phase is complete, the Hyderabad Metro has plans for a second phase of developments that have already been approved by the regional government. This expansion is outlined in 8 sections in which 2 additional lines will be added to the system. These sections include the following:

This is the eleventh urban metro system to be inaugurated in India, following Calcutta, Chennai, New Delhi, Bangalore, Gurgaon, Bombay, Jaipur, Chennai, Cochín and Lucknow. Despite its recent inauguration, it already has two operating lines.

In what would be a deadline of a little more than a year, the aim is to have the entire first phase inaugurated by December 2018. It is expected that the 66.56 kilometers (41.36 miles), including the part under construction will be operational.

The Hyderabad Metro mascot is a man dressed as a prince named Niz. Seated atop a flying carpet, he is carrying a scepter and dressed in a green and red top and blue pants. His name originates from the word Nizam, which was the title of Hyderabad’s monarch until the adoption of the republic in 1954.

This metro has received rewards including the 2015 SAP ACE in the category Strategic Human Resources and Talent Management.

As a modern city, Hyderabad is home to millions of people and is becoming more representative of an important tourist destination with its many lakes, the greenery of its vegetations and the multiethnic presence of its notable Muslim and Buddhist population. Likewise, Hinduism also makes Hyderabad a place in which India can feel a sense of identity. Some places to see while using the Hyderabad Metro include:

Hussain Sagar Lake: This is Hyderabad’s most significant lake, considering its size and the number of attractions that can be found along the coast. The west coast of the lake, including the Jalvihar Waterpark, is accessible from Begumpet station. Sanjevaaiah Park and the famous flag monument are also accessible along the north coast from Rasoolpura station.

Camp Gymkhana: Located in Secuderabad, this is the city’s most important cricket camp. It was founded in 1928 and from that date, it became the home for Hyderabad’s cricket team. It is easily accessible by metro and can be found between Paradise and Parade Ground stations.

Indian Institute of Chemical Technology: Located in Hyderabad, this is a national institute charged with research in biochemistry, bioinformatics, applied chemistry and chemical engineering. It offers public health services especially related to fighting tropical diseases. You only have to get off at Habsiguda station and walk a few meters to enter the institute.