The Mumbai Metro is a massive underground transportation system that gives service to the city of the same name. The metro has one unique line that runs 11.4 kilometers, three more under construction and three more approved. The system has 12 operating stations and a total of 58 under construction. The current line has a station above the surface, but the ones under construction will be underground. The Mumbai metro is relatively modern, having its grand opening in 2014 and it’s planned to be completed by 2021. The generic tickets for a trip range from 10 ($0.16) to 110 ($1.70) rupees, depending on the distance. The first train system leaves at 5:20am and arrives at 11:46pm.

Mumbai, also known as Bombay, is the most populated city in India. With more than 14 million people, this city is found on the west coast of India and represents its biggest commercial port opening to the Indian Ocean. Mumbai is rich in history because after the Hindu domination it was colonized by Muslims, Portuguese and English. As a result, its architecture is outstanding, containing some monuments declared World Heritage Sites by UNESCO.

Mumbai is made up of two islands connected by bridges to the rest of the land. One interesting fact is Bombay contains the biggest cinematographic industry in the world: Bollywood. India’s major languages are English and Hindi but the state of Maharashtra has as its main language Marati, spoken at large in Mumbai. In this city other languages are also spoken like Guyarati and Urdu.

The Mumbai metro extends for 11.4 kilometers. It’s one of the newest metro’s in the world, opening in 2014. Its construction has been very fast and presently its first line is working, with all the stations above ground. The trains that run along this line are fabricated by the Chinese company CSR Nanjing. The cars have air conditioning, ideal for Mumbai’s hot tropical climate and LCD screens to display various information. In addition, the seats are lined up against the wall, to allow the greatest space for standing passengers. A train can have from 4 to 8 cars and can transport around 1000 people.

Mumbai is not just a city, its also a metropolitan area. The Suburban Mumbai Subway gives service to this area by transporting more than seven million people from the outskirts of town into the working and financial area. At the beginning, the transportation problem was primarily directed at the suburban areas. But with the exponential population growth that India had, the urban transportation started to become a necessity.

For this reason, in 1990 the government of Mumbai was given the task of performing diverse studies to determine what would be the massive transportation system to build. It was this way that the Mumbai Metro happened, it finally got completed thanks to its masterplan in 2004. The Project was approved to be constructed in three phases, one of them was completed in 2014 and the rest are under construction. 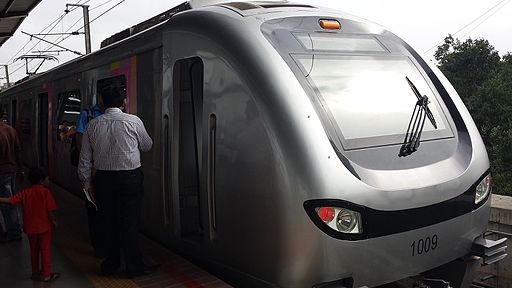 The Mumbai metro has only one working line since its grand opening. The length of this line is 11.4 kilometers. The trip of this line is from Versova to Gathkopar. Line 1 is also known as the Versova-Andheri-Gathkopar aisle. This line is far away from the city center and connects the east suburbs to the west side of the city, in a trip that’s done in a horizontal manner. Although it only has one line, this system is the eighth of the world to transport the greatest amount of people. In its first year of operation, this line transported more than 90 million people in 300 thousand trips.

All the train stations are above the ground. They contain three stories connected by at least four mechanical stairs per station. The station murals where designed by architecture and art students that won a public contest. In the station, there is no security door separating the tunnel from the waiting area.

One of the major advantages of the construction of the Mumbai Metro line 1 is its closeness to the airport. Various plans have identified the importance for the line to be built this way. The Airport Road station is located 10 minutes away from the airport, which represents an interesting option for tourists. The main continuous problem is the lack of an existing bus lines connecting both systems, making it necessary to take a car or taxi.

The station Marol Naka is also located close to the international flights terminal, while the Western Express Highway is adjacent to the domestic flights terminal. In addition to the metro connections, the airport has a direct exit to the western line of the Suburban Railway. However, the coming lines are being built with various stations to the Chatrapati Shivaji airport, that way the whole metro system will be connected efficiently.

Schedule rigidity is not something that characterizes India, thus the reason why it’s impossible to find an arriving and departing schedule, like the European trains have. However, the opening and closing of the Mumbai Metro is clearly defined. The operator announces that the first train leaving the Versova station is at 5:20am, while the first train leaving the Gathkopar station is at 5:29am. The functionality of the system ends with the last train leaving Versova at 11:20pm and from Gathkopar at 11:46pm.

The frequency of the trains is determined by the day. Monday through Friday, the wait for the trains is around 4 minutes during rush hour and 8 minutes in non-rush hours. On the other hand, Sundays and holidays, the approximate wait is always of 8 minutes. All the times above are subject to change with no previous announcement.

The Mumbai Metro Price system is based on the distance the passenger travels between stations. The minimum price for a trip is 10 rupees ($0.16) and it increases 10 rupees every time a station is passed. This way, the complete Price for the twelve stations is 110 rupees ($1.70), which represents a cheap option for locals and extremely cheap for tourists.

In addition, the paying system is extremely diverse and it adapts to the necessities of every passenger. The methods of access to the system can be reduced to two. The first method is buying a chip or token, which is ideal for passengers that use the Metro once or sporadically. These chips are usually acquired for one way, although they can also be bought round trip. All the chips have the end of the Metro journey as the expiring date.

The other way to access the train is by buying a rechargeable card for multiple trips called Smart Card. This card can be acquired in any Mumbai metro station and its cost is 50 rupees ($0.78) as an insurance. For this card, the travelers are offered two price systems. The first one is the Store Value Pass, where one can just put money in and as one travels the ticket price will be deducted. One can recharge from 100 ($1.55) to 3000 ($46.5) rupees. The other method is the Trip Based Monthly Pass, where travelers have the option of buying tickets at a reduced price for the month.

All the entrance methods can be bought at any station through a dispensing machine which is available in English, Hindi and Marathi or by walking up to the operator counter.

Rules have been established for all travelers to ensure the correct function of the Mumbai Metro, with various categories and with various penalties including fines and jail. Some of them are:

The future of the Mumbai Metro is being built. The necessity to create a public urban transportation system with stations with a short distance have been felt since the first decade of the XXI century, where the plans for the total system where created, as well as the timeline. The first line which is currently running was opened in 2014. The timeline was planned with three construction phases ending in 2021.

Seven lines are being planned for the Mumbai Metro. Only Line 1 has been opened, but one side of Line 2, Line 3 and Line 7 are under construction. The other side of Line 2 and Line 4 are in the litigation process to start construction, while Line 5, Line 6 and the end of Line 7 have been approved but construction hasn’t started.

Line 2 runs from northeast Dahisar to the east of Mandale. The first part of the line will be opened in 2019 and has 17 of the 39 planned stations. This first phase has a distance of 18.5 km. The litigation for the other part is waiting to be assigned to initiate construction October 2017. All stations have been planned as elevated.

Line 3 will cover a distance of 33.5km and runs from the financial district of Cuffe Parade in south Mumbai to the city of SEEPZ in the north, 26 stations will be underground, which represents a novelty for this metro system. The importance of this line relies on the connection of the domestic and international flight terminals at the Mumbai airport.

The entrance and exit of the Mumbai Metro is strict. Being a system where prices run based on the distance traveled, it’s indispensable to know one’s destination before getting on the system or on the other hand, have enough money in the Smart Card in case the number of station is exceeded.

Like in any other massive urban and suburban transportation system, one must be alert to robberies. India is a country with a large population and the Mumbai Metro is constantly filled with people, which is why robberies are frequent, even though the Metro has a security system with cameras and guards ready to help with any security demand.

Not only should wallets and purses be guarded. In addition any type of luggage of backpack should always be held close. Any bag or purse left unattended raises suspicion, even terrorism, should be denounced to the police authorities, to avoid any major harm.

The Mumbai trains are usually overcrowded during pick hours. If you are a tourist that is looking for calmness, it’s recommended to avoid any train system in the city during pick hours and to chooses other ways to travel and enjoy the journey.

The Mumbai metro is the sixth metro system that has been constructed in India, after Calcuta, Chennai, Nueva Delhi, Bangalore and Gurgaon. After Mumbai, the Jaipur metro was opened.

Although the planning and construction have been done quickly, in comparison with other metro systems, the project has faced many delays and its planned finish date of 2021 is improbable.

The line 1 trip of the Mumbai Metro reduces the time traveled by twenty minutes from Versova to Gathkopar, while the travel time by bus or car is more than an hour.

Approximately 97% of the world’s metros run under direct current, but that’s not the case for the Mumbai Metro, which runs on alternating current, which increased the costs of its construction and maintenance.

Although the metro receives its name after the city of Mumbai, presently Line 1 is in the suburbs, far from the center and financial areas of the city.

View from the Mumbai Metro

With the actual travel, the Mumbai Metro isn’t one of the best options for tourists. Nowadays, Line 1 of the system, which is the one working, connects the northern Versova and Gathkopar suburbs, this are the main residential areas of all the social classes.

For this reason, the tourists that have used the system recommend visiting the metro for what it stands. The Line 1 stations are located above ground level, resulting in a great attraction for its panoramic views of the City of Mumbai. In addition, the beauty of the metro system has been widely praised so transportation system lovers can find great joy with this system.