The Indian city of Bangalore has a subway system opened in October 2011. Namma metro has 2 lines serving 16 stations. The total length of the system is 42.3 kms. The operator of this system is Bangalore Metro Rail Corporation Ltd. (BMRCL). This system moves daily over 50 thousand passengers (2015), a relatively low utilization, considering that in the Bangalore metropolitan area has 5.7 million inhabitants.

There are plans to expand this system, and probably this year (2015) to open other 41 stations, which will put an end to Phase I. Phase II can be completed by 2019, leaving the system with 4 lines and 102 stations and 115 line kilometers.

The project is managed by the Delhi Metro Rail Corporation (DMRC) since the beginning of the 2000s. The system would be completed in 2 phases. In phase 1, 2 lines, the purple line and the green line, which would intersect perpendicularly would be built. At the end of this phase the system would be 33 kms long and would serve 32 stations. The line that would circulate in the horizontal axis through the city from east to west would have 18 kilometers long. The vertical axis, from north to south, would stretch 15 kilometers. 9 kilometers would circulate underground through the center of the city and the rest by elevated viaducts.

The second phase of Namma Metro will add 72.1 kms of tracks and 61 stations (13 kms would circulate underground and the rest in elevated viaducts). This phase should be completed by 2019. It will add two new lines in addition to the extensiones built in phase 1. When phase 2 is complete, the total route length will be 140 kilometers including the 25 kilometers extension to the airport. 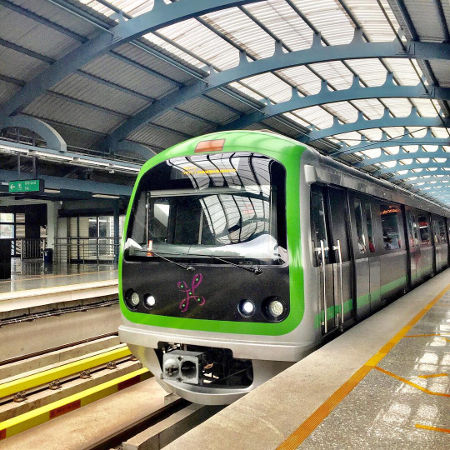 Currently, this 2-phase project jas 2 lines in service, the purple line and the green line.

This line is operating since 2011. When Phase I is completed it will have 17 stations and nearly 18 kilometers long. At the end of phase 2, it will be 40.1 kms long and 36 stations. But currently there are only 6 stations and 6,7kms of route. The line connects Baiyappanahalli to Mahatma Gandhi Road. Almost all of the route is underground. It is the east - west axis system line. The current stations are: Baiyappanahalli, Swami Vivekananda Road, Indiranagar, Halasuru, Trinity, Mahatma Gandhi Road.

Currently there are 10.5 kms of route serving only 13 stations. Nagasandra in the nort connects to Sampige Road in the south. The final length of the line will be 40.1kms and 32 stations. It is operational since March 2014. The current stations are: Nagasandra, Dasarahalli, Jalahalli, Peenya Industry, Peenya, Yeshwanthpur Industry, Yeshwanthpur, Sandal Soap Factory, Mahalakshmi, Rajajinagar, Kuvempu Road, Srirampura, Sampige Road.

It is the other planned line, that will serve between Gottigere and Nagavara. The line length is 21.2 km and its number of stations is 18.

Namma metro accepts contactless cards and tokens. Tokens are purchased for one-way trips and are valid for 30 minutes after purchase. Important to remember to return the token at the departure gate, otherwise you could be fined.

Frequent travelers can buy the Namma Metro Travelcard, with which you get discounts of up to 15-21% compared to the tokens. The card price is Rs50 and the trips are loaded/charged separately.

There are tickets that can be loaded into the Smart Cards. One is the Stored Value Ticket or Varshik. This ticket gives you a discount of 15% on the value of the token. Only accepts Rs50 multiple refills and up to Rs1500. You can make multiple trips with this ticket. It's a pay as you go. Ie balance is deducted from the fare used each time. The ticket is valid for 1 year from the last recharge. The contactless smart cards use stored value ticket by default. The other ticket is the Trip Ticket or Sanchar. This one is valid for multiple trips between two fixed stations. This rate applies when batcjes of 10, 40, 50 or 100 trips are purchased. A discount of 10% over a Varshik rate is obtained. In a smart card you can load at a time Varshik and Sanchar tickets, and the system will apply the corresponding lower rate.

Group tickets for a minimum of 10 people traveling between the same stations. It is a paper ticket, valid for a single trip and must be returned on the departure station.

There are parking lots in Swami Vivekananda Road station and in Baiyappanahalli station, but these are not free. A fee is paid in cash or flash cards. Hybrid and electric cars can park for free. The fee to park a car full day is Rs50 and Rs25 bikes.

Do not smoke, drink and/or eat inside the trains. There are customer service counters in all stations. There are LEDs reporting real-time train arrival. There is WIFI in the stations.

There is a proposed network of light rail transit (LRT) with 31 kms of route between Bannerghatta Road and Hebbal plus another 9 kilometers between Magadi Road and the Peripheral Ring Road, with 40 stations, to complement the transport systems in Bangalore. Map via www.bmrc.co.in
See map full resolution. It may take a little bit to load.