The Yekaterinburg Metro currently comprises 9 stations served by a single line, although two additional lines have been planned. It runs between the hours of 6:00 am and midnight. The current line extends over 12.7 kilometres. It can be covered, from start to finish, in 19 minutes at an average speed of 50km/h. Trains stop at each station every 7 to 8 minutes during regular hours, 4 to 5 minutes during rush hour, and every 11 minutes at night. The standard fare is 28 rubles (0.48 USD) per ride.

Frequency ranges from 7-8 minutes during standard hours, 4-5 during peak hours, and 11 minutes at night. Standard fares are 28 rubles (0.48 USD) per trip. It requires the use of the Ekapta card. The Yekaterinburg Metro does not connect directly to the Yekaterinburg-Koltsovo Airport, but the trip can be taken by bus in little more than an hour.

Yekaterinburg is the fourth most populated city in the Russian Federation. Its metropolitan area has a population of 1.488.000 people. On a cultural and economic level, it is as important as Moscow or Saint Petersburg, which makes it one of the country's major financial hubs.

It's the capital of the Ural region, on the central-western side of the country. It was founded in 1723, and was named after Empress Catherine I of Russia. During the post-war period, the city experienced remarkable infrastructural development, which included an airport, train stations with nation-wide connections, and a modern underground metro system. This was developed in order to meet the demands of its growing territory, which continues to be one of the country’s priorities.

On the 27th of April 1991, the highly-anticipated Yekaterinburg Metro first opened its gates, following 11 years of construction. Works began in 1980 and suffered several delays. The first station was ready by 1987, and by 1989, the project reached 70% completion.

The Yekaterinburg Metro system spans over 9 stations distributed alongside a single line, although two more lines have been planned. Tracks extend for 12.7 kilometres, and run from the Ordzhonikidzevsky district to the Chkalovsky neighbourhood, crossing the Leninist quarter. It serves around 49 million passengers every year. At some point, soon after its inauguration, it was believed to be the shortest underground transport system, although this was later denied.

In order to meet the high passenger demand, it has 62 trains on its roster, consisting of 4 cars each. They travel at 50 kilometres per hour, and they take approximately 19 minutes to go from one terminal station to the other. Please see below for a list of the Yekaterinburg Metro’s stations. 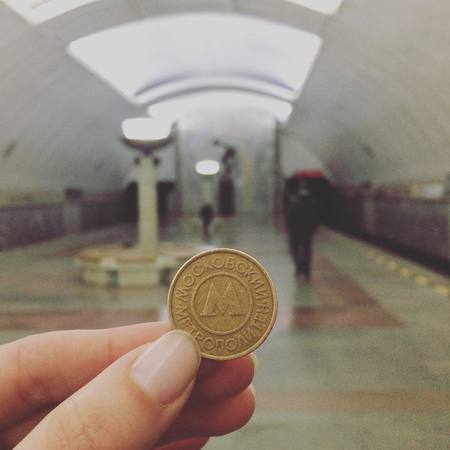 Prospekt Kosmonavtov (Проспект Космонавтов): This is one of the terminal stations. It first opened on the 27th of April 1991, after 9 years of construction. It is named after the avenue that runs directly on top. It’s located at approximately 6 meters underground. The station’s floors are lined with marble slabs, and the columns are decorated with mirrors. It has two exits, although neither has an escalator.

Uralmash (Уралмаш): It was opened on the 27th of April, 1991. It's located on Bauman Street. According to the project architects, it was designed to resemble a screw's ridges, as a symbolic homage to the worker's spirit of the Soviet Union. Its walls are remarkable for its marble coating, and the floors are covered with granite slabs.

Mashinostroiteley (Машиностроителей): It was opened on the 27th of April 1991, and built 4.5 meters underground. Structurally, it comprises 24 columns in an island-shaped platform. The station's signature black floors, decorated with marble details, make the building look solemn. The style mixes industry and elegance, which provide for a beautiful ambiance.

Ural'skaya (Уральская): This stop was opened on the 23rd of December 1992, in the Railway neighbourhood. The station's walls are lined with marble, and the floor has a grey granite finish. The large chandeliers provide a nostalgic air to the building, and evoke the time of the Russian czars.

Dinamo (Динамо): It was first opened on the 22nd of December 1994. It is named after the Dinamo Stadium, located a few meters away from the station. The terminal's design drew inspiration from sports events, in keeping with its location and name. The floor is lined with granite tiles, with a sculpture on one of the platforms' ends.

Ploschad' 1905 Goda (Площадь 1905 года): This large terminal is located near the central square, on the 1905 neighbourhood. The design is highly conspicuous, as the marble-covered ceiling is sharply different from the red granite floor tiles, generating a beautiful contrast between both colours.

Geologicheskaya (Геологическая): When it first opened on the 30th of December 2002, it was named Kuibishev station. It was designed to serve both the Metro passengers, as well as those of the adjacent surface trains.

Chkalovskaya (Чкаловская): This is one of the newer stations, first opened on the 27th of July 2012. The design is similar to that of an air terminal and is meant to suggest worldliness. In fact, as a bit of trivia, four clocks can be found on the station's walls, showing the current time in Yekaterinburg, Moscow, Vancouver, and Washington D.C. Built 43 meters underground, it’s also the deepest station on the system.

Botanicheskaya (Ботаническая): It first opened on the 28th of November 2011 and currently serves as one of the system’s terminal stations. It’s a very visually striking station: the ceiling is covered with hexagons that emulate a beehive. The floors are built with granite, and the columns are lined in hexagonal-shaped metal sheets.

The Yekaterinburg Metro is highly interconnected with bus and trolleybus routes, tram, and taxi stands that span across the entire metropolis. You could say the Yekaterinburg Metro system acts as the spine of the city's public transport system. Please see below for a list of available connections for each station.

The Yekaterinburg Metro operates continuously between the hours of 6:00 AM and midnight. Trains run from Monday to Sunday, no exceptions. Because of high demand, it would be impossible for it to stop operating for even one day.

On extraordinary cases, when the safety of passengers is compromised and vehicles must be stopped, authorities will make the necessary announcements on all major TV and radio stations, as well as on social media. However, these emergency situations are incredibly rare, so feel free to assume the Metro will be open when planning your trip.

The time to reach from one end of the line to the other is 19 minutes, and trains run in intervals of 7 to 8 minutes during standard hours. However, during peak hours, trains arrive every 4 to 5 minutes. Late at night, after 9:00 PM, trains reach the station every 11 minutes.

Passengers of the Yekaterinburg Metro need to acquire an Ekapta card in order to use the service, as authorities have abolished the use of paper stubs. In any case, the card can be acquired on any authorised sales point, or at sales kiosks distributed around all stations. The base fare is 28 rubles (0,48 USD) per ride, although the Ekapta card also allows passengers to purchase package plans to adjust the needs of frequent travellers. Next is a detailed list of the different plans available:

Unlimited monthly pass, four transport networks: This plan allows unlimited rides among the tram, trolleybus, bus, and Metro networks for 30 days, for 1000 rubles (17.01 USD). It can only be purchased by elementary or secondary school students, aged 7 to 17, and enrolled in either public or private schools.

Unlimited monthly pass, four transport networks: This plan allows unlimited rides among the tram, trolleybus, bus, and Metro networks for 30 days. It costs 1700 rubles (28.92 USD). It's only valid for students enrolled in a private or public university, technical institute, or vocational college.

Plans for senior citizens and people with disabilities

Unlimited Monthly pass, four transport networks: This plan allows the unlimited use of tram, bus, trolleybus, and Metro networks for 30 days. This package costs 1000 rubles (17.01 USD. It can only be purchased by senior citizens or people with certified disabilities.

1 Month package, for transport networks: Users who purchase this plan can access up to 40 rides among the tram, trolleybus, bus, and metro networks, over 30 days. It's only valid for senior citizens or people with certified disabilities. 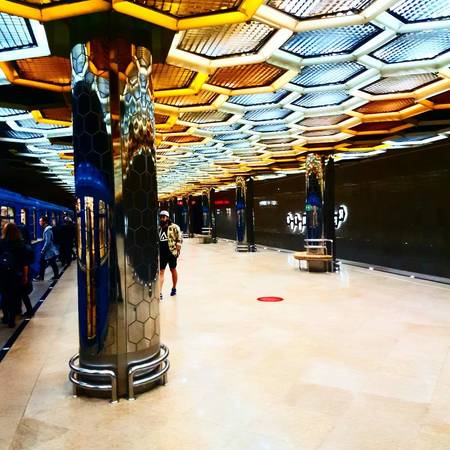 In order to maintain order and preserve the system's infrastructure, the Yekaterinburg Metro authorities have set a series of passenger rules and restrictions. Some of these include:

The Yekaterinburg Metro strives to safeguard the passengers' safety. All stations are monitored 24 hours a day through closed-circuit security cameras. Furthermore, their official website offers recommendations on how to act in case of emergency (although the page is in Russian, passengers can use the Google Translate app).

The possibility of terrorist attacks is a special concern for Yekaterinburg’s citizens, and authorities are always on guard. On the same website, you can find information on how to react to an impending attack, as well as tips to identify suspicious behaviours.

The Yekaterinburg Metro is not directly connected to the Yekaterinburg-Koltsovo Airport, although there is an alternative that links it with the Botanicheskaya station.

After reaching said station, you will have to walk approximately 200 meters until the Shvartsa bus stop. From there, board a 039 bus. After 22 stops and nearly an hour's ride, you will reach the Aeroport Kol'tsovo shuttle stop, which is located just opposite the airport itself. Total travel time is around one hour and twenty minutes.

Should you wish to reach the city centre from the Yekaterinburg-Koltsovo Airport, you will need to leave the main terminal and walk 200 metres to the Aeroport Kol'tsovo bus stop. From there, you may board a 039 bus. There are other bus routes passing through this station, headed towards several of Yekaterinburg’s outer districts. However, if you wish to reach the city centre, the 039 line will be the most appropriate option. After 52 minutes, 22 stops, or 13 kilometres, you will reach the Shvartsa bus stop, across the street from the Botanicheskaya Metro station. From there, you can transfer and reach any of the areas served by the Metro.

There are plans to build a second metro line, which will cross the city from east to west. The first projected section will comprise 4 stations along 4,5 kilometres. According to the responsible authorities, works will begin in 2018 and will last approximately 5 to 6 years.

Funding will come from a public-private partnership: a quarter of the total cost will be covered by the local government, another quarter from the Russian Federal government, and the rest by a private company. Once completed, the line will cover a total of 13,5 kilometres and 10 stations. It is expected to be open to the public in 2023.

For the long term, there are plans for a third Metro line. However, not much is known yet about this project, which will not begin until after the second line has been completed.

The mythical Yekaterinburg State Circus, one of the city's historical landmarks, is located across the street from Geologicheskaya station. It was built in 1970 to house massive circus events and public spectacles. For Western tourists, their use of animals as part of the show may be controversial, although not all shows include them. It received thousands of tourists every year and it's one of the Russian Federation's best-known circus venues. The building's structure is striking and renders the site easily recognisable. In addition, all locals are familiar with its locations.

Close to the Ploschad' 1905 Goda station is the Museum of Fine Arts, which houses one of the richest and largest art collections in the Ural region. Painting and sculptures there were made by notable Russian artists and tend to carry strong patriotic notes, meant to extol the country's history.