Moscow’s 14 line metro system is in constant expansion. Its regular metro schedule runs from 5:30 am to 1:00 am and operates at a high frequency. Single tickets can be used although using a Troika card is most recommended. The price of a single fare card is 55 rubles (US $0.97). Any of Moscow’s 3 airports are accessible by bus and metro and the metro is famous for the murals, mosaics, candelabras, and art that fill its stations.

Moscow runs with a large network of Metro lines that provide service to most of the city in conjunction with other transportation options (including buses, trains, and trams) allowing travel to any part of the city.

This system’s stations are famous for being some of the most beautiful in the world. They feature murals, mosaics, candelabras and other artistic motifs that show the evolution of Russian ideas throughout time.

Unlike many of the world’s other metro systems that surged due to the necessity for a fast and efficient mode of transportation, the history of Moscow’s metro is also tied to the politics and ideas that shaped Russian society.

The metro is more than just a transportation system. It’s a symbol of national pride, representing how the technological capacity of this county has advanced as much as the culture and society.

Although it is known that plans existed for metro construction during the time of Imperial Russia, the First World War and various civil wars meant the first metro line would not begin to run until May 15, 1935 during Stalin’s rule. 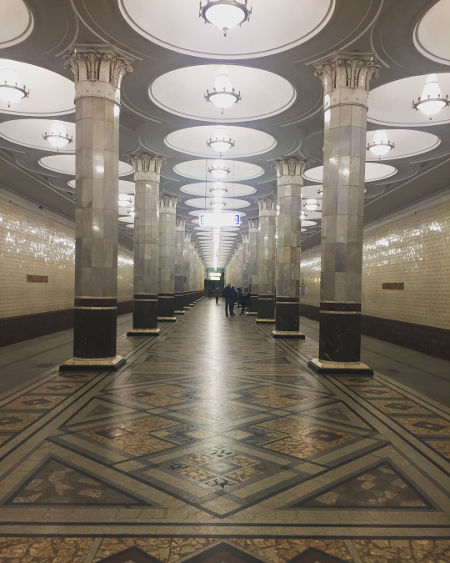 The metro was then seen as a show of the Soviet Union’s superiority over capitalistic societies. From this date onwards the metro was expanded and various lines were created with the idea that the stations represented the ideas of the Russian aesthetic, above all, the idea of ”splendor” and of a “brilliant future”, which explains the abundance of reflective murals and candelabras.

During the cold war, some stations were constructed with the intention of serving as a shelter in case of nuclear war. During this period, the grandiose style of the past was in part rejected in favor of more simple stations.

The art in these stations reflects the era in which they were created. The primary ones demonstrate the government’s intention to inspire the citizens’ appreciation for Soviet art. The stations that were constructed during the Second World War portrayed military motifs and the stations that came after the Cold War demonstrated a more reserved esthetic.

The present day Moscow metro is not only counted among some of the most beautiful, but it is also one of the most used systems in the world. Being that it is a truly efficient system, the system finds itself constantly expanding to meet the needs of Moscow’s residents.

Moscow’s metro system has 14 interconnected lines that allow passengers to travel to almost anywhere in the city. Each of these lines has a name, a code (numbers or numbers and letters) and a color. Despite being a complex and extensive system, these three things together make it easier to identify each line and to transfer from one line to another. Most of Moscow’s metro lines run below ground but there are also some surface and elevated stations.

It is Moscow’s oldest metro line and runs from Bulvar Rokossovskogo to Salaryevo cutting halfway across the city on the northeast – southwest axis.

This line runs roughly diagonal through Moscow from north to south. Mayakovskaya is one of its most beautiful and more popular tourist stations.

This was the second line to operate and it is the longest metro line in all of Moscow. Its 22 stations run through Moscow from west to east. They connect to the Mitino District and they connect Krasnogorsk with the Moscow’s eastern suburbs. 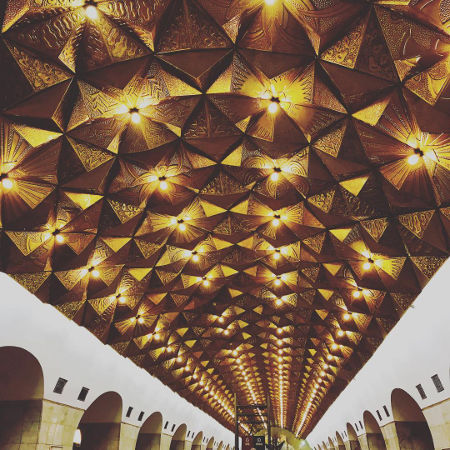 Although most lines pass through Moscow from one end to another, this line leaves from the center of Moscow and connects with the Dorogomilovo and Fili districts to the west.

This is one of Moscow’s two metro lines that have a circular route. Its 12 stations run around the city from downtown. It is the most famous line since several stations still contain the famous Stalinist architecture.

This line runs from one end of Moscow to the other from Medvedkovo to Novoyasenevskaya.

This 23 line station passes through Moscow from the northeast to the southeast and is the most used metro line.

This line is composed of two separated tracts that pass through the city from east to west. It is expected that both lines will be connected by 2020. 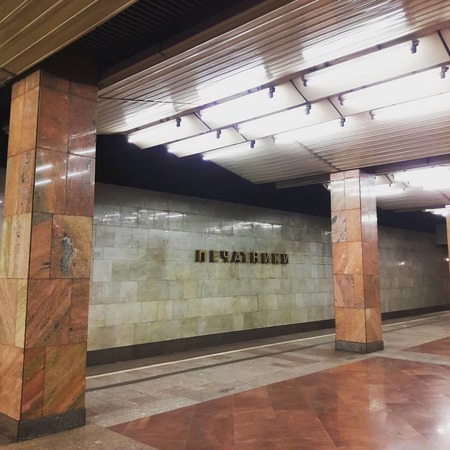 This is Moscow’s second largest metro system. It passes from one end to another from Altufyevo to Bulvar Dmitriya Donskogo.

Only 2.1 mi (3.3 km) long, this is the shortest line in Moscow’s metro system. It connects the gray line to the green line.

This line can be considered as an extension of line 6. It extends to Buninskaya Alleya. It is not an underground line, but an elevated one.

In spite of being a monorail and not a metro, it is part of the metro system and the connection between the metro and monorail is free within 90 minutes.

This is the second circular route and its 31 stations surround all of what is considered historic Moscow. 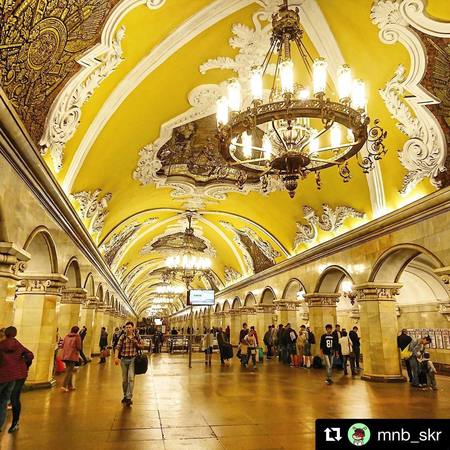 14 of Moscow’s metro lines connect at various points along its route, making it easy to transfer comfortably from one line to another. Once your ticket has been validated, you can change between lines 1-12 without a time limit and without paying extra.

The connection from one of the 12 lines to line 13 (the monorail) and vice versa is free within 90 minutes from initial entry.

The connection from one of the 12 lines to line 14 (Central Circle) and vice versa is free within 90 minutes from initial entry.

Single metro tickets don’t include connections to other transportation systems such as buses or trams.

The Troika card is the most convenient payment method for transportation in Moscow. It consists of a plastic card that can be loaded with money and used on future purchases for any available ticket type.

The card requires a deposit of 50 rubles (US $0.88) that you can get back when returning the card. The Troika card is valid for 5 years and can be used on the metro as well as any of the other transportation systems. You can reload it at ticket windows in the stations, on machines or through the app.

If you do not wish to use a Troika card, you can purchase a single ticket or a ticket package that comes in the form of a red card. You can use this card on the metro as well as other modes of transportation such as buses and trams.

These passes have been given the name “Edinaya” and they permit unlimited travel during a specified period of time. You can begin using the passes for at least 30 days within 10 days from the time of purchase. The specified period will begin counting down from the first time the passes are used. Going forward, the 30 day passes can only be purchased through a Troika card and they are ready for use from the time of purchase.

Although the Moscow metro is well designed, extends to the city’s borders and includes connections with surrounding districts, it has to be adjusted to the constant demand for extensions and upgrades. Some of the stations from line 1, the first line to operate, are the oldest in the system and must be upgraded. 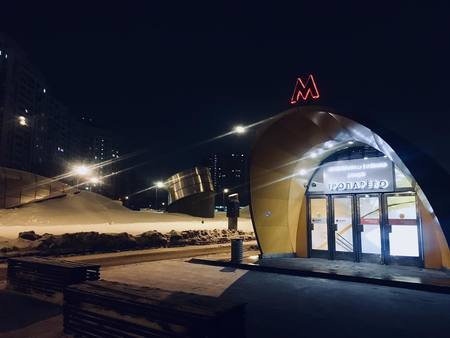 Although major extensions were completed in recent years, large expansions of Moscow’s metro can be found in current production. Presently, various lines are planned to be extended to a total of 93 miles (150 kilometers) by 2020. Some of the expansion’s main projects will add 5.9 miles (9.5 kilometers) to the Lyublinsko-Dmitrovskaya line and will take the metro system into the Solntsevo district as well as the suburbs of Moscow.

Moscow has three international airports, all 19 or 25 miles (30 or 40 kilometers) away from downtown. It’s possible to reach any one of them using a combination of metro and bus, but keep in mind that this may not be the best option if you are traveling with a lot of luggage, considering that the bus drops you off in the suburbs where you will have to take a metro to downtown Moscow.

If you are traveling with a lot of luggage, it’s best to catch a taxi or take the Aeroexpress, a train that connects the airports with downtown Moscow.

If you are not traveling with a lot of luggage or if you are looking for the most cost efficient option, it is completely possible to get downtown by bus or metro:

From Domodedovo airport: You can take the 308 bus to Domodedovskaya station from the green line (line 2) and from there continue your route to your final destination using various metro lines. The ride from the airport to the green line lasts 30 to 40 minutes. Express buses cost 100 rubles (US$1.76), while the 24 hour buses cost 120 rubles (US$2.11).

From Sheremetyevo airport: Various bus lines take you from the airport to the Rechnoy Vokzal station’s green line (line 2) or to the Planernaya station’s purple line (line 7). The trip to either of the two stations lasts 40 to 50 minutes. A 90 minute ticket that includes a bus trip, admittance to the metro and unlimited connections during the 90 minutes cost 50 rubles. (US$0.88).

From Vnukovo airport: The N611 bus takes you to the Yugo-Zapadnaya station from the red line (line 1). The trip, valued at 50 rubles (US$0.88), lasts around 40 minutes and you can purchase a 90 minute ticket that includes the bus trip as well as admittance to the metro, plus unlimited connections during the 90 minutes,

Sites to see via Moscow’s metro:

Saint Basil’s Cathedral (Catedral de San Basilio): This famous cathedral is one of the icons not only in Moscow, but in all of Russia. This Orthodox Church, unique in its architecture and famous for its colorful domes can be found in Plaza Roja (the Red Square) and is part of Unesco’s World Heritage Sites. The cathedral is found 10 minutes by foot from line 3 of the Ploshchad Revolyutsii just as it is from line 2 of the Teatral’naya station.

Red Square (Plaza Roja): In addition to Saint Basil’s Cathedral, you will also find the Kremlin in this square, the official fortress in which the President of Russia resides, the Monument to Minin and Pozharsky and Lenin’s Mausoleum. To reach the square, take line 3 to Ploshchad Revolyutsii station or to line 2 to Teatral’naya station.

Metro stations: With their candelabras, murals and mosaics, the metro stations are a tourist attraction on their own. Some of the most famous and beautiful include:

Tretyakov Gallery (Galería Tretiakov): It is one of Moscow’s most famous art museums. It contains the largest quantity of Russian works in the world. The gallery can be found five minutes by foot from line 6 on the Tretyakovskaya station.