The metropolitan train or Saint Petersburg Metro is operated by the public company, Sankt-Peterbusrgsky Metropoliten. This was the second metro to be constructed in Russia, following the Moscow Metro. The Saint Petersburg Metro has 69 stations and 5 lines that make up a total of 118.6 kilometers (73.7 miles).

The metro operates from 5:45 a.m. to 1:00 a.m. The basic price for a single use token is: RUB 45 ($US 0.65). There is no direct connection to the airport but there is a connection through a combination of bus lines.

The Saint Petersburg Metro is famous around the world for its history, beauty, originality and the depth of its stations.

The system was accredited as a secure transportation entity in the field of railway transport and metro systems by the Federal Agency for Rail Transport, FAZHT (Roszhelder) in April 2018.

In 1810, the idea of a subway train began to develop, but King Alexander I found the idea to be ludicrous especially since the proposal meant digging under the Neva River.

Metro construction became a reality, after numerous studies and proposals, especially related to the city’s geological characteristics (a large amount of underground water and ground instability). The Saint Petersburg Metro is the steepest metro system in the world.

The average depth is 60 meters (196.9 feet). Some sections reach 110 meters (360.9 feet), an extraordinary engineering feat when considering not only the delays due to ground conditions but also the delayed process due to political relations and the outbreak of the Second World War. Delays were generated for over a decade.

The subway’s first phase began in 1941. Operations didn’t begin until 1955, however. According to historians, 5 major milestones were reached on what is now a mega project: 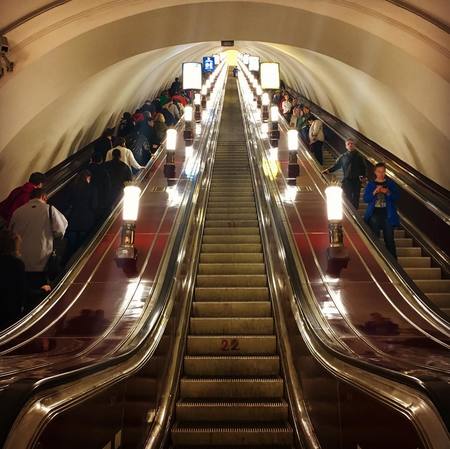 The Saint Petersburg Metro system currently has 5 lines and 69 stations that total 118.6 kilometers (73.7 miles). There is a sixth line under construction with an expected opening in 2020. Over 2.3 million people, including residents and tourists, ride in the system’s more than 1600 train cars daily. 16,000 people are also employed in its various sectors.

Each line is identified by a number and color, so that residents and tourists can easily complete their trips

Saint Petersburg’s second line opened in 1961. The most recent construction was in 2006 and connected the stations, Prospekt Prosveshcheniya and Parnas. The line is 30.1 kilometers (18.70 miles). There are 18 stations located throughout the city from Tekhnologicheskiy to Parnas and the total trip takes about 47 minutes.

The third line began to operate in 1967. Its most recent station opened in 1984. The line runs from Vasileostrovskaya to Rybatskoye and 10 stations make up a total length of 27.6 kilometers (17.1 miles). The total trip duration is about 32 minutes. 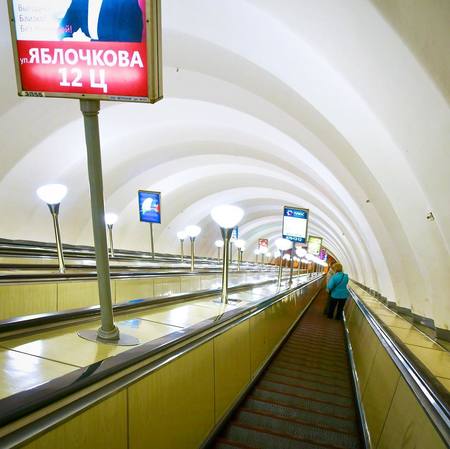 Inaugurated in 2008, this line is the most contemporary. The most recent station opened in 2012. It is made up of 12 stations covering a length of 20.04 kilometers (12.5 miles) and the average trip takes about 30 minutes.

Line 6 is named Krasnosel’sko-Kalininskaya. It is undergoing construction from the southwest to northeast. This new line is expected to be operating by 2020. 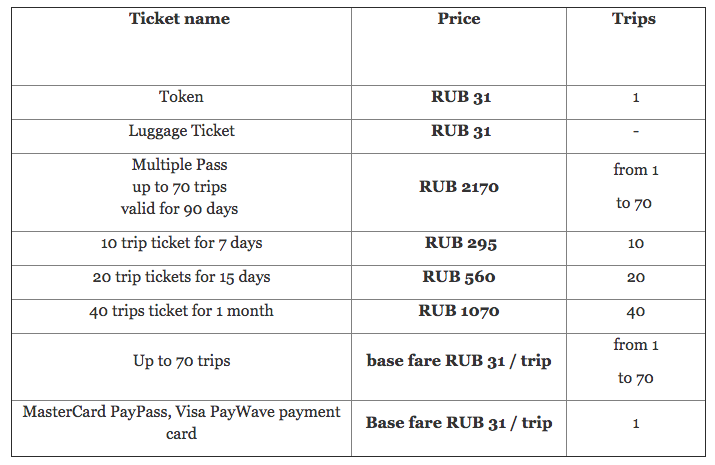 The train frequency is every 2 to 3 minutes. During peak hours, the time is reduced to every 95 seconds.

The details for night time special schedules are included below.

The night time schedule consists of the hours, 1:00 a.m. to 5:00 a.m. and is only enacted on special holidays:

The night time schedule has some fee restrictions, detailed below:

Night time trains are available on Line 5 from April 30 to November 15, when the bridges over the Neva River are raised.

Only tokens can be used to pay for night time trips. The train frequency is every 20 minutes.

There are some lobby entrance and exit restrictions on holidays including: 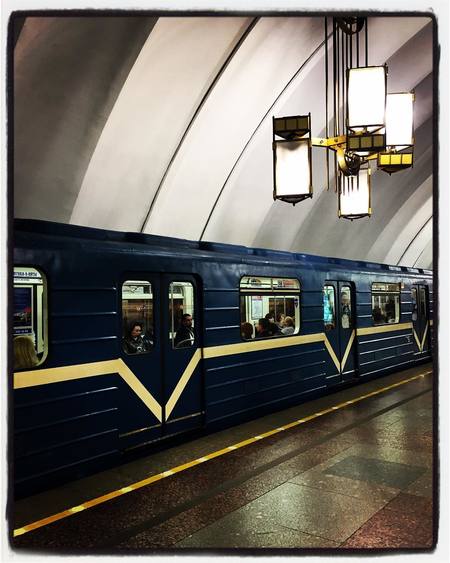 Connections to other lines:

The stations with connections to other lines are named after the lines that they cross. There are at least 7 transfer points:

The following stations connect to the ports:

Various payment methods are available on the Saint Petersburg Metro. The emblematic tokens, (known as zheton), single tickets, magnetic rechargeable cards and the prepaid cards for frequent travelers can be obtained at ticket offices and the stations’ automated machines.

The baggage fee is RUB 45 (USD 0.65), which can be purchased with a token or electronic card within the card’s validation period.

All transport passes are available on the Saint Petersburg metro:

The standard electronic ticket gives riders the option to take continuous trips as long as there is a remaining balance on the card to cover the costs.

The Saint Petersburg Metro system offers parking service to its riders. There are tickets that offer parking and two trips per day. A ticket may be obtained after parking and a separate ticket purchase is not required.

Parking is available at the following stations:

For vehicles entering from 6:01 a.m. to 8:00 p.m. Free for passengers that change to public transportation. They must always exit the parking area before 11:59 p.m. the same day.

The Saint Petersburg Metro is not only a palace of the people, it is also a museum filled with history and elegance. Line 1 is characterized by its marble walls, majestic columns, reliefs, and mosaics that pay homage to Stalin.

This is exemplified at the Avtovo station, where the following inscription can be found: “Eternal glory to the brave defenders of Leningrad”. There is a statue of Pushkin at Pushkinskaya station. There are industrial-themed reliefs at Kirovskiy Zavod. Striking marble and mosaics are present at Baltiyskaya and the bronze decor at Narvskaya alludes to Stalin.

The most striking station is Admiralteyskaya, which contains massive marine-themed mosaics. It can be found on Line 5, which is the system’s most recent line.

The following includes the development plans for the Saint Petersburg Metro:

The closest airport from the city center is the Saint Petersburg Pulkovo Airport. The distance is 17 kilometers (10.6 miles). One of the most economical ways to travel to and from the airport is by metro and bus.

A connection to the airport can be made at Moskovskaya, which offers the following transportation options:

This trip can also be taken in a taxi or a minivan, known as “marshutka”, depending on one’s budget and desired comfort level when traveling. The route from the station to the airport is approximately 20 minutes. The ticket price is between 30 and 40 rubles, keeping in mind that luggage is charged separately.

The Saint Petersburg Metro is a large museum, within itself. Visitors have the option of 60 or 90-minute guided tours, that are included in the price of the ticket and led by local guides.

Guided tours are a great opportunity to learn the history of the Soviet Union while mainly traveling along the stations, Ploshchad Vosstaniya, Avtovo, Kirovskiy Zavod and Admiralteyskaya. Map via www.metro.spb.ru
See map full resolution. It may take a little bit to load.