The recently inaugurated Granada Metro (09/21/2017,) has a single line and 26 stations. The regular ticket has a price of 1.35 €. During most days, its business hours are from 6:30 am until 11:00 pm, although service is extended for more hours during weekends. The train frequency is of 15 minutes. It is very well connected with the city’s bus system.

Granada is a Spanish city of only 234,000 inhabitants. It is part of the autonomous community of Andalusia, located to the south of the Iberian Peninsula. Although it has a low number of local citizens, Granada is considered an important touristic center in the country thanks to the great cultural patrimony that it hosts.

This city, just like the rest of Spain, experimented an economic boom during the decades of the 60s and the 70s, when the prevailing poverty of the region that was mainly caused by the Civil War started to disappear.

With the so-called Developmentalism, the city’s aspect completely changed, which helped it become a place attractive to tourists.

As a consequence, with the coming of the new Millennium, the authorities took the decision to invest in anything regarding to public transportation, which is vital for the sustainable development of the urban regions.

In 2006, a call for bids was offered to any firm interested in constructing the service known as the Granada Metropolitan. The idea was to build a light rail system with 15 kilometer long path, which would be available to serve downtown Granada. 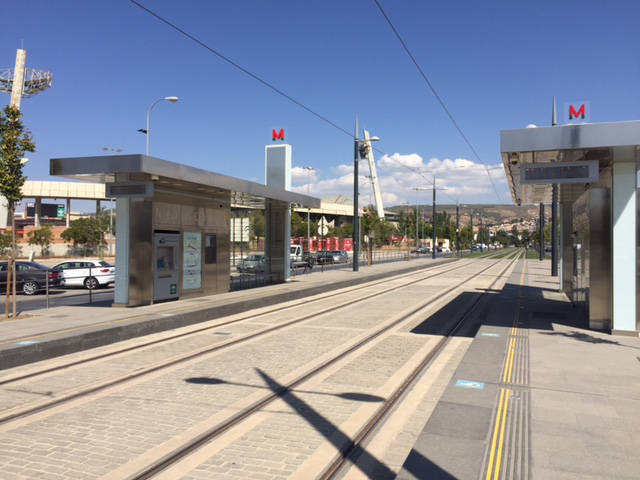 Initially, the planned opening date would be December, 2016, but, for many reasons, this was not the case. Later, the metro system was planned to be officially operational on 2017. The metro finally began service on September 21st, 2017.

The Metropolitan Metro of Granada only has one commercial line, comprised of a 15 kilometer long network that serves 26 stations. It is estimated that it transports around 47 thousand people daily. Its tracks are installed throughout the city, starting at the locality of Albolote, and ending at the Armilla municipality. In fact, the light railway service drives through four municipalities in total, which represents a little more than 60% of downtown Granada.

This route was designed to be interconnected with the current bus lines, therefore, both transportation services complement each other. Also, the metro will be linked with the future high speed train station that the city will have, including, of course, the traditional railway terminal.

The stations of the Granada Metropolitan Metro will be shown below: 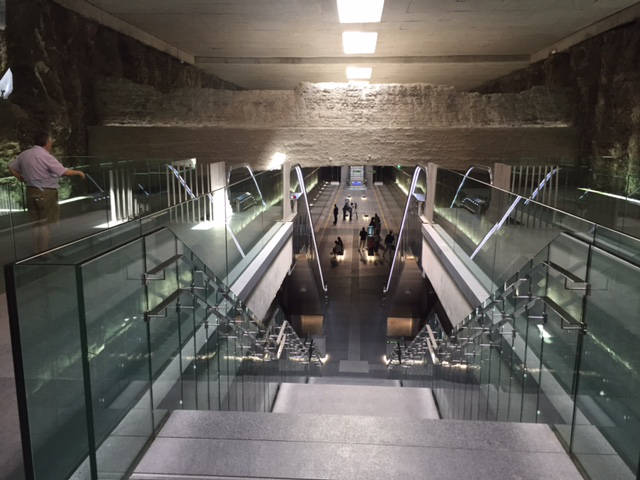 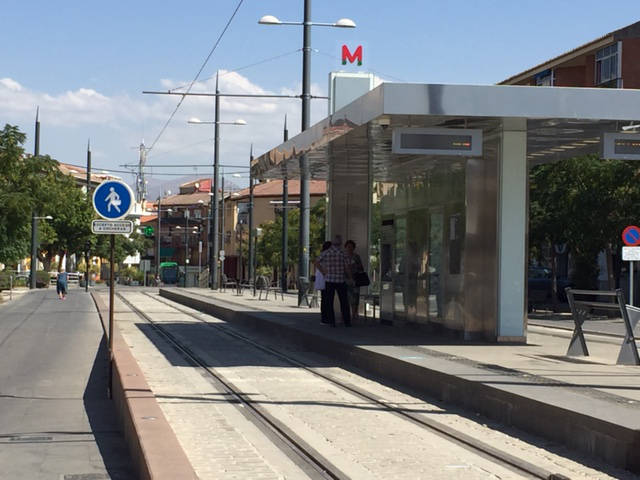 The Granada Metro has different has different types of fares that are adapted to the user’s needs, including monthly payment subscriptions. The standard fare for one ride among any station within the system has a price of 1.35 €.

Likewise, there are other payment options available, such as cards that work as electronic cash, or tickets for tourists. The different subscriptions and prices available to the passengers of the Granada Metropolitan Metro will be shown below: 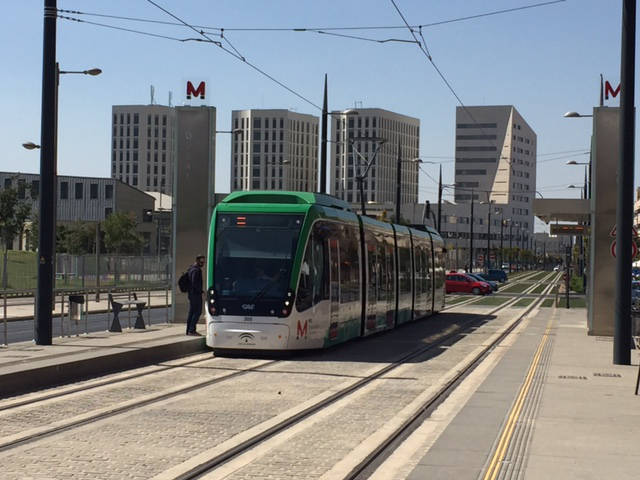 Up until now, there are no known special payment options for people with disabilities or for senior citizens. All of the tickets and cards can be acquired at the public ticket booths available at the different metro stations.

Many of the Granada Metropolitan Light Rail stations have direct connections to different bus routes that serve the entire city. The description of the system’s stations that have bus stops in their proximity will be shown below:

The Granada Metropolitan Light Rail is available during most of the day, with the purpose of serving the biggest number of users.

From Monday to Thursday, trains are operational at 6:30 am, and work uninterruptedly until 11:00 pm. The trains have a departure frequency of 11 minutes during peak hours, and of 15 minutes during off peak hours.

Meanwhile, during Fridays and Saturdays, as well as holidays, service is extended until 2:00 am, beginning service at 6:30 am on Fridays and at 7:30 am on Saturdays. The departure frequency remains the same during most of the day, until 11:00 at night, where the train frequency changes to 30 minutes, since there are less passengers.

On Sundays, service begins slightly later than usual, starting at 7:30 am, and working until 11:00 pm. The train departure frequency is the same as the rest of the days. 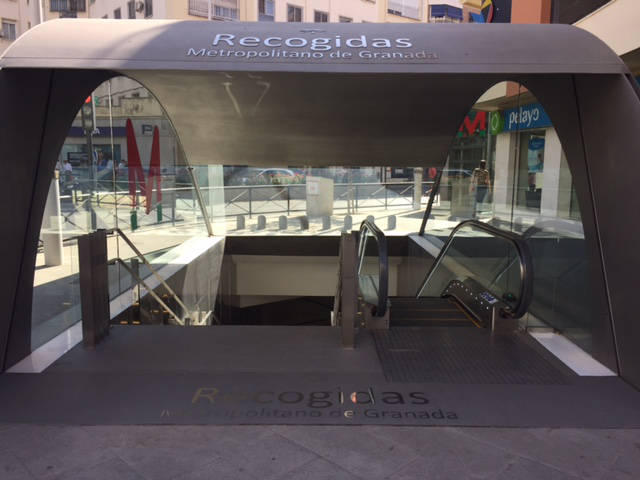 The Federico García Lorca Granada-Jaén Airport, with national and international routes, does not have a direct connection to the Granada Metropolitan Metro. However, it is possible to use this service of massive transportation to reach the airport via using a bus line. To do this, the users should follow these instructions:

First, you will have to board the metro towards the Autobuses Station. This is very simple if you follow the system’s instructions. Then, once you reach the aforementioned stop, you should head towards Palacio de Congresos, where there are bus routes that have the airport as a destination.

A distance of 17 kilometers separate the city of Granada and the Federico Garcia Lorca Granada-Jaén Airport. Because of this, the entire journey between Autobuses Station and the airport takes approximately 45 minutes, counting all of the stops. The price for the One Way Ticket has a price of 2.90 euros, which can be paid in cash to the driver or via the Consorcio Card. Likewise, you have the possibility to check the services’ business hours by accessing the airport’s website.

To do this journey on the opposite direction is even easier, that is, from the airport to downtown Granada. Just in front of the main entrance of the airport there is a bus stop where the buses with destination to downtown Granada arrive. To make a connection to the Metropolitan Metro of Granada, you will need to travel in the bus, and then get off at Palacio de Congresos, where the Autobuses metro station is located.

The authorities have informed that there is the possibility that a second line for the metro will be built. The alternative route would be parallel to the main one, complementing the service. The project does not have a starting date nor an ending date. In any case, the managers and investors should wait to get more data from line 1 to calculate the profitability of building a second line. 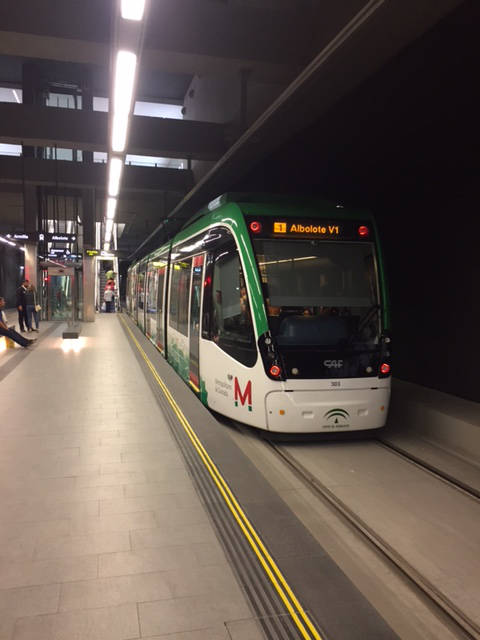 There have been also discussions among many construction companies and the city hall about the possibility of building a line that would join Granada with nearby towns such as Santa Fe, as well as stopping by the airport. However, these plans are currently just speculations.

The touristic attractions that Granada offers are abundant, therefore, it will not be difficult to find what to do near the Light Rail stations. However, there are a few points of interest that should be highlighted.

Firstly, within a few meters of the “Universidad” station, the beautiful San Juan de Dios Basilica is located. It is a magnificent building that dates back to the 18th century, when it was built due to the initiative of the Alonso de Jesús y Ortega priest. It has impressive paintings in its roofs, where some Bible passages are narrated. On the 20th century, this building was officially considered a basilica by Pope Benedict XV. Also, the remains of San Juan de Dios, the patron saint of Granada, lie on this Basilica. He is also known as the Universal Patron Saint of Hospitals. This basilica is without a doubt a patrimony inherent of the city that should be visited by people who visit this locality. 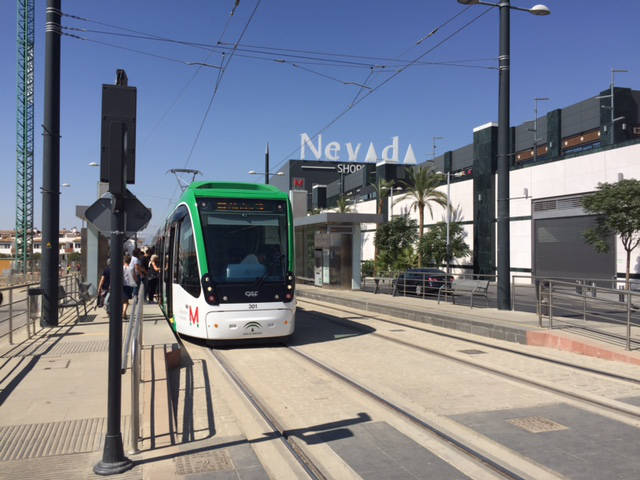 Secondly, the famous Museum of Science of Granada is located near the “Alcázar del Genil” station. It was inaugurated on 1995 and, since then, it has been considered an important touristic place in the city. Its facilities have big spaces for the diverse flora and fauna exhibits that are hosted in the museum, as well as counting with an aquarium. It is an ideal place for the enjoyment of children, and it is also an ideal place to learn about topics such as astronomy and science in general, since this museum has interactive rooms that are conditioned to teach children about such topics.