The Belo Horizonte Metro is a train system that travels all the way at a surface level. It currently consists of a single line with a railway that is 37 kilometers in length, and has 19 stations. It works every day of the year from 5:40 am until 11:00 pm, and has a departure frequency that ranges between 4 to 10 minutes. The price for a single ride ticket is of 1.80 reales (0.55 USD.). There is also the option of buying cards. There is no direct connection to the airport, but you can use public transportation to go to the airport via buses.

Belo Horizonte is the capital of the Brazilian State of Minas Gerais, which is located at the south of the country. It has a population of over five million inhabitants in its metropolitan area. The city was built with the intention of becoming a political, economic, and cultural center of the state. This city has had a significant growth in population in the last decades.

Due to the fact that Belo Horizonte is the third most populated city in Brazil, it has hosted important events, such as being selected for hosting the Soccer World Cup 2014. In terms of number of inhabitants, it is ranked just below Rio de Janeiro and Sao Paulo. Due to its high population, Belo Horizonte has a high demand of services, especially of transportation services.

During the 80s, the members of the City Hall noticed that the population growth would lead to the necessity of the construction of a massive transportation system. This led to the opening of the Belo Horizonte Metro in the year 1986. The metro service began operation with only five trains. More trains were planned to be bought for the opening day, but the federal government at the time decided to reduce the budget needed to buy them. Then, in 1991, the purchase of 20 additional trains was approved due to a decision from the National Congress. In other words, by 1991, the metro had a fleet of 25 trains.

The Belo Horizonte Metro currently has one line with a railway that is 37 km long. Also, there are plans to expand the metro by adding two new lines to the system, which will add 30 kilometers to the railway network.

The Belo Horizonte Metro is comprised of a single line. The trains travel a total distance of 37 km. The railway begins at Eldorado station, located in the municipality of Contagem to the north of Belo Horizonte, and ends at Vilarinho station, located in the Venda Nova region in the southwest of the city. The Metro is comprised of 19 stations that are distributed within the current railway, which is 28.1 km long. The remaining 9 kilometers of distance belong to the return trip that the trains make to go back to their stations of origin. The trains and stations are located at surface level, even though metro services tend to be underground. The metro travels to the main regions of the city, offering transportation to approximately 840,000 users daily. The trains travel at an average speed of 40 km/h. The frequency of departure of the trains is between 4 and 10 minutes. 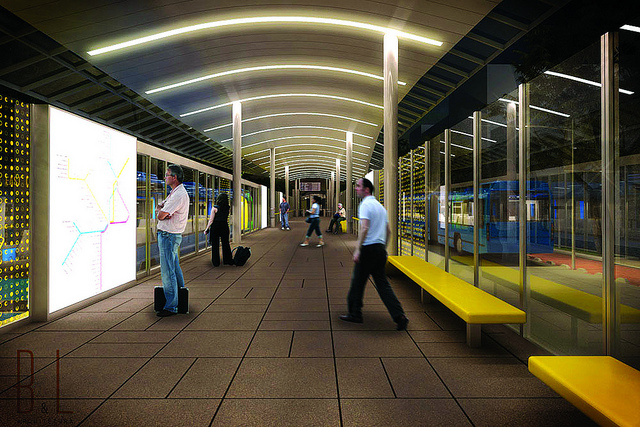 Estação Eldorado: It is located in the Contagem municipality, in Rua Jequitibás, 530. It is one of the terminal stations of the metro system, and it is the busiest Belo Horizonte Metro station.

Estação Cidade Industrial: Offers transportation to the neighborhoods of Camargos and Santa Maria, which are located in Rua Diamante, 50 – Camargos.

Estação Lagoinha: It connects the neighborhood Lagoinha with downtown Belo Horizonte and the bus terminal of Rodoviário. Its address is Avenida Nossa Senhora de Fátima, 1.295 – Lagoinha.

Estação Central: It is located downtown, close to Arrudas Boulevard, in Praça Rui Barbosa, s/nº - Center. It is famous for hosting cultural events within its installations.

Estação Santa Efigênia: It offers transportation to the people of the region of Santa Efigênia. In the surrounding area, there are many hospitals. Also, the faculty of medicine of the Federal University of Minas Gerais is close-by. Its address is Rua Conselheiro Rocha, 2.387 – Santa Efigênia.

Estação Santa Tereza: It offers transportation to the Santa Tereza neighborhood, which is close to the Mário Penna Hospital and the Belo Horizonte Municipal Chamber. Its address is Rua Mármore, 1.020 – Santa Tereza.

Estação Horto Florestal: It is located between the regions of Horto and Sagrada Família, offering transportation to both regions. Its address is Rua Conselheiro Rocha, 4.050 – Horto.

Estação Santa Inês: It is located in the Santa Ines neighborhood. It is near the Botanical Garden, the Agronomic Institute, and the Museum of Natural Science. Its address is Avenida Contagem, 30 – Santa Ines.

Estação São Gabriel: Just like the previous station, this one is located in the Sao Paulo neighborhood, close to the Municipal Market. Its address is Avenida Cristiano Machado, 5.600 – Sao Paulo.

Estação 1º de Maio: It is located in the region of Primeiro de Maio, which is a few meters from the Municipal Secretary of Saúde. Its address is Avenida Cristiano Machado, 9.040 – Primero de Maio.

Estação Waldomiro Lobo: It offers transportation to the Heliópolis neighborhood, which is located between the Waldomiro Lobo and Saramenha avenues. Its address is Avenida Cristiano Machado, 9.184 – Heliópolis.

Estação Vilarinho: It gives transportation services to the Vila Clóris region, which is adjacent to the graveyards of Bosque da Esperança and Cemitério da Consolaçao. This is one of the terminals of the Metro de Belo Horizonte system. Its address is Avenida Vilarinho, nº 36 – Vila Clóris.

Likewise, the metro makes connections to bus routes that offer transportation to urbanizations where there is no metro service nearby. Some of these routes are: 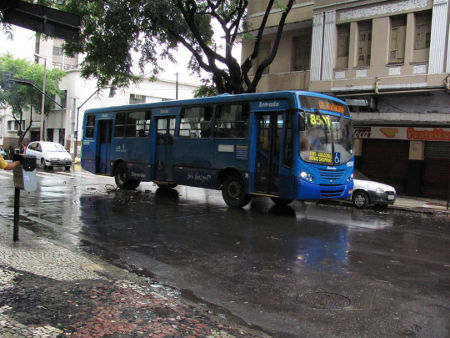 Using the Belo Horizonte Metro is simple. There are two options to pay for the service, which are regular tickets and the BHBUS card. The latter also allows you to board the buses. The BHBUS card is reusable, but it cannot be used for more than six times per day.

There is also a ticket that allows 10 trips, which is called the Bilhete Multiplo, and has a price of 16.20 reales (4.91 USD.) The advantage of any of these metro tickets is that they can be quickly and conveniently purchased in the ticket booths, without much hassle. They are ideal for people that will stay for short periods of time in the city and that will not use any other means of transportation. People who want to use the bus lines will need to obtain the BHBUS card.

The BHBUS cards are available in the ticket booths within the stations, as well as in other authorized shops. Their prices include a trip in the metro and in a bus. The prices are divided in the following categories (R$ = reales):

The metro service is free for people over 65 years of age. Also, the metro’s personnel is trained to give any form of assistance needed by senior passengers.

Children under six years of age can travel for free in the Belo Horizonte Metro.

There is no direct connection between the Aeroporto Internacional de Belo Horizonte-Confins airport and the metro. However, in case that people need to reach the airport from downtown Belo Horizonte by using public transportation, they can use the following alternative:

The passenger should first board the Belo Horizonte Metro, and then they should travel to Lagoinha station. Next, within a couple of meters of the metro’s entrance, they should head to the bus terminal of Rodoviário. This terminal offers trips to all of Brazil. The passenger should then find a bus to the airport. They can ask in the information booth which bus goes to the airport. The distance between downtown Belo Horizonte and the airport is of 45 km. The entire trip lasts one hour, and costs 13.45 R$ (4.10 USD). It is recommended that you check Rodoviário’s website to get information about the schedules.

Between 2001 and 2004, CBTU, which is the firm in charge of managing the metro, showed the “Railway Transportation Master Plan.” This plan’s objective is to modernize and expand the regional train service that operates in the metropolitan region of Belo Horizonte. The people in charge of the plan made a survey of the main city highways to determine traffic in the nearby future. They reached the conclusion that the construction of two new lines for the metro would be necessary. These lines will be called Line 2 and Line 3. Additionally, Line 1 will be expanded to allow connections to the city of Betim. Line 2 is planned to offer transportation to the Barreiro-Calafate sector, and will offer trips to Amazonas and Alfonso Pena avenues, the hospital area in the Santa Efigênia neighborhood, and the Santa Teresa community. The total length of the Line 2 network will be of 19 km in length.

Line 3 will connect the regions of Pampulha and Savassi. All of its stations will be underground. It will offer journeys to Antonio Carlos and Alfonso Pena avenues. This line’s railway will have a total length of 12.5 km. With the “Railway Transportation Master Plan” project, the entire transportation system of the metropolitan area of Belo Horizonte will be restructured, and traffic in the highways will decrease. With this expansion, the daily ridership will increase to 1.2 million passengers, which will make the Belo Horizonte Metro the second busiest metro system in Brazil. It will have a bigger daily ridership than the Rio de Janeiro Metro.

The impressive Sao José church is located near Central station. It was founded on the year 1902. It is one of the most striking structures in the city. This church has a unique style due to its Neo-Manueline design, which was an architectonic trend from Portugal. This architecture art style is difficult to find outside of Portuguese-speaking countries. Tourists can enjoy this impressive church in Rua Tupis street, in downtown Belo Horizonte. This church has free admission. Therefore, anyone can visit it.

Also near Central station, there is a touristic attraction called Museu Força Expedicionária Brasileira (FEB Museum). It is a small place with a rich history. It has exhibits about the Brazilian expedition in Italy during World War II, in which the country sent a troop of 25,000 soldiers in support of the Allies. This museum is managed by war veterans from that expedition, many of which are available in the museum to tell their anecdotes from the war. Additionally, the artillery, guns, tanks, and many other artifacts of historic interest from the war are always on exhibition.

In the Santa Ines metro station, visitors can find the Natural History Museum and Botanic Gardens (UFMG), which is an ideal place for biologists and plant lovers. The museum’s facilities also provide rooms where native animals from the region are displayed, including monkeys, agouties, turtles, among others. To encourage children to learn physics, the museum offers special games to them.