The São Paulo Metro has 6 lines, 5 underground and 1 that operates as a monorail. The current system is 80 kilometers (49.7 miles) long and is used by 4.6 million riders every day. The standard price for a single ticket or Unitario (valid for one trip) costs 4 R$ ($US 1.25). In addition, there are various plans that provide regular riders with the best prices. The system runs almost 24 hours a day.

São Paulo, also known as San Pablo by native speakers, is a megalopolis in every sense of the word. As the largest city in South America and one of the largest in the world, there are over 21 million residents in its metropolis area. The ambitions of this Brazilian giant are well represented in the metropolis through the consolidation of its global scale potential. It has already established itself as the major cultural center for Portuguese economics and tourism.

Its size is comparable to that of New York, Tokyo, or Mexico City, causing the development of the transportation system to face the demand of millions of Brazilians. This, in turn, led to the city’s natural growth and as a result, it was during the 60s, that the government established what would soon be known as the São Paulo Metro.

The proposal for the initial subway project was 4 lines with a route of 70 kilometers (43.5 miles) and a projected completion in 1978. However, the work took a little more time, extending into the 80s and 90s.

Since then, the transportation system has underwent several expansions on its four lines, in addition to incorporating a fifth and sixth route right before the millennium. It currently has a total of 80 kilometers (49.7 miles), transporting 4.6 million passengers daily.

The São Paulo Metro structure consists of 6 railway lines, 5 underground and one that operates as a monorail. These lines are distributed in a way that connects the city’s four compass points, while at the same time, distinguishing its 91 stations among other ground transportation systems such as the omnibus and taxi line.

The Blue Line, which runs north to south of the city, was the first route to be completed on the São Paulo Metro. With its construction being initiated at the end of the 60s and wrapped up at the beginning of the 70s, it is fitting that it was Brazil’s first underground transportation method.

It has 23 stations distributed along 20.4 kilómetros (12.7 miles), from the Tucuruvi district in the North Zone, to Jabaquara, located in the Rua dos Jequitibás sector in the south.

The Green Line, also known as the Paulista Line runs through Paulista Avenue in São Paulo, since it is in the city’s financial center. Its total route consists of 14.7 kilometers (9 miles), distributed along 14 stations.

It departs from the Alto de Pinheiros district, situated in the west of the city up to the Vila Prudente sector, in the eastern area. Its construction began in 1987 and its first route opened later in 1991. Since then, new stops have been annexed which, little by little, expanded the route. Despite being known as Line 2, it actually came to be São Paulo’s third metro line.

The Red Line, previously named the East-West line, has a total route of 22 kilometers (13.7 miles) that are distributed along 18 commercial stations. It is the line with the greatest number of riders in São Paulo’s metro system.

Its opening dates back to 1979, in which it became the second line to be constructed contrary to what its “Line 3” name suggests. It runs from the Barra Funda sector, in the west of the city, to the Itaquera district in the east.

The Yellow Line is 12.8 kilometers (8 miles) which is divided among 11 commercial stations, serving residents of the Da Luz neighborhood up to the Rua Pirajussara area. Previously, it was known as the Southeast-Southwest line because it specifically served these areas in São Paulo. Its construction began on May 25, 2010, delaying completion for 4 years until November 15, 2014. 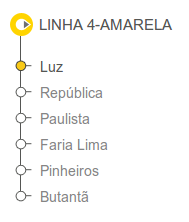 Despite being so small, compared to the previous routes, it is of extreme importance to the residents as it runs through the main financial centers of the city. This causes it to have a high number of daily ridership.

Construction of the Lilac Line, also known as Line 5, began much earlier than route 4. It began precisely in 2001, followed by an inauguration on October 20, 2002.

It has 10 stations, divided along 18.5 kilometers (11.5 miles), from the Capão Redondo district to the Santo Amaro sector, located in the city’s south central zone. 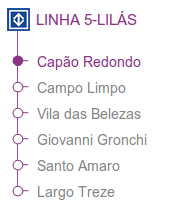 Since the opening, the route has been expanding, growing from 6 stations in the beginning to 10 in 2017. An additional 7 stops are planned and should be ready by 2019.

The Silver line is the most recent as well as the shortest route on the São Paulo Metro. It was inaugurated at the dawn of 2014, with two operating stations that run 2.9 kilometers (1.8 miles). As it has yet to be finished, work on this line is expected to be completed by 2020. In place of a heavy train, it has the distinctive feature of having the monorail service, only serving the Vila Prudente and São Lucas districts.

The São Paulo Metro is very well connected with different bus routes that serve the areas in which trains don’t travel and at the same time, it connects passengers to a railway system that is responsible for connecting the outlying zones of the city to the city center. Below are the various stations, which have some type of connection, specified by their lines. 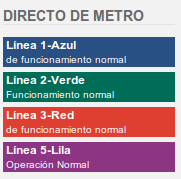 The São Paulo Metro has various fare types, with diverse payment plans, taking into consideration how to serve the demands of its riders. The standard price of a single ticket, used for one trip, costs 4 R$ ($US 1.25), but the plans offer a final savings to consumers. The following are São Paulo Metro’s ticket types and payment plans.

“Single tickets” are prepaid personalized cards that can only be used by the owner. This means they cannot be borrowed or sold. They include the following payment plans.

The São Paulo Metro schedules are extremely advantageous to riders, since the metro runs for practically 24 hours. From Sunday to Friday, the subway system begins running from 4:40 am to closing at midnight. The trains usually run with complete normalcy, except on certain occasions, in which there is maintenance work and the schedule must be modified.

Service is extended one additional hour on Saturdays, with facilities opening at 4:40 am and closing at 1:00 am.

Bicycles on the metro

As the subject of mobility is changing in the world, the São Paulo Metro plans to change along with it. It has various stations with dedicated bicycle parking areas, so that bicycles may be rented for service.

However, when transporting one’s own bike between stations, it is not always possible to do so at any time. From Monday to Friday, it is permitted from 8:30 pm until the metro closes.

Similarly, bikes can be transported from 2:00 pm until closing on Saturdays. Meanwhile, on Sundays, it is possible to transport it all day. It is important to note that one can only travel with bikes on the last car of any train and only a maximum of four bikes is permitted at one time.

Currently, the São Paulo Metro is undergoing various construction work with the goal of expanding the subway system. This includes the construction of the four new lines, 22, 19, 16 and 23. All are expected to be opened for bidding to the public and to await offers from notable companies that are interested in executing the project. However, these routes lack a definite beginning and completion date, which they could receive, without putting a number of modifications in place.

By contrast, the current lines have the following expansion plans:

Though the São Paulo Metro does not have a station connecting directly to the São Paulo-Guarulhos International Airport terminal, there are various metro stops to bus routes that do reach the airport. They are made available to travelers as a part of the third route (red line). Bus services are similar, enabling direct connections to the airport.

The preceding also applies in case one wants to go from the city center to São Paulo-Guarulhos International Airport. However, if flying into São Paulo and the mission is to reach the city center from the terminal, one can find bus stops outside the airport. The buses have routes going towards the city, including those that connect to the metro system.

São Paulo, having become a megalopolis, presents an immense opportunity for leisure time with its night clubs, natural parks, restaurants and five stat hotels, just to mention a small portion of what the city boasts. There is always something to do.

Standing out among all this is the iconic Paulista Avenue, which is on the metro’s Line 2 route. It is dedicated to 3 stations: Consolação, Trianon Masp and Brigadeiro. On its 2.8 kilomoters (1.7 miles), gathered together are important hotel, shops, restaurants and the precious Assis Chateaubriand São Paulo Museum of Art. It is undoubtedly the best option for beginning your tour of the Brazilian city.