BursaRay is the rapid transit subway system serving Bursa in Marmara Region of western Turkey. With the opening of this metro system city’s mass transit network reached a new height. Previously it had only buses and trams running on the surface level.

Currently, BursaRay has two operational lines connecting 38 stations. Total route length is 38.9 km. Trains run at a maximum speed of 70 km/h. A transport company under the Bursa Metropolitan Municipality, called Burulaş is given the responsibility of running it. As per 2012 record, the system has an annual ridership of over 91 million.

Bursa is the fourth most populated city in Turkey and is also one of its industrial centers. With a wealth of historic sites and outdoor adventure spots, it ranks high the list of tourist attractions of Turkey. It is easy to understand why the opening of a rapid transit system was inevitable in the city.

The plan was approved on 31st Jan. 1997 but construction began almost 2 years later. TÜVASAŞ, a railcar manufacturer, is behind the construction of the system. Bursaray started trail run on 24th April 2002. Line 1 started revenue operation on 19th August, the same year.

The system operates from 5 AM till midnight every day. The train frequency is, on average, 10 minutes most of the time of the day. It is more on the main line than the western part of Acemler Station where the lines run separately. In the section between Demirtaşpaşa and Acmeler stations, one train comes every 5 minutes during the daytime. The headway increases in the night time.

Get the detailed timetable of Bursaray here. 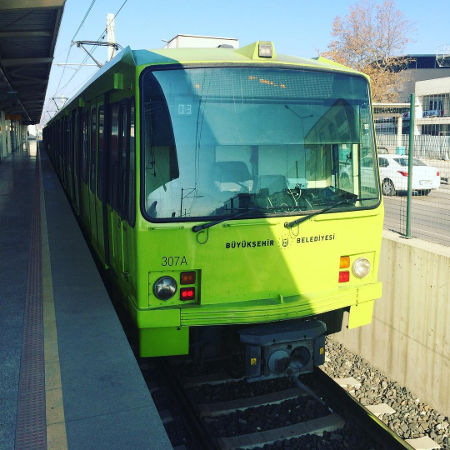 The route of Bursaray is completely independent of other public transport routes. Each line has a common and a separate section. Line 1 starts from Emek Station on Mudanya Road and Line 2 starts from University Station on İzmir Road. They converge at Acemler Station and then follow a common path. It travels along Ankara Road and passes through the city center and Şehreküstü Meydanı. The route then follows Haşim İşcan Caddesi over Gökdere Viaduct. Then it goes back along Ankara Road and ends at Kestel Station.

7 of system’s 38 stations are built underground. The section between Şehreküstü and Merinos stations is underground. A short tunnel section is there before the intersection of the two lines near Acemler Station. There are also tunnels built towards the western end of Line 2. Batikent is again an underground station. The stations are 120 meters long and have island platforms. Bursaray is built maintaining the same track gauge as other Turkish metro networks like Ankara Metro, Istanbul Metro etc.

At present, there are 122 trains running on these two lines. Of these, 48 are Siemens Type B80, 30 are Bombardier Flexity Swift and 44 are Düwag SG2 . The trains are operated by an automated train control system. 3-car trains run on Line 1 and 4-car trains on Line 2. Line 1 connects Arabayatagi Station to Emek Stations. It takes about 35 minutes to complete the journey. Line 2 spreads from Kestel Station to Üniversite Station. A full journey takes about 42 minutes on this line.

There is a plan to expand the Bursaray system to cover a 50 km long network in near future.

A legal travel by Bursaray involves paying the accurate fare. People who are 60+ years old, students and teachers pay a discounted fare. However, they need to show their ID card to the station stuff in order to avail the discount. Disabled persons, those who are more than 65 years old, veterans, state government employees and sports persons performing at the national level ride the metro free of cost.

A single journey ticket costs 2.25 TL and a discounted ticket costs 1.50 TL. Magnetic paper tickets, Subscription cards and Travel cards can be used to pay the fare. Travel cards are issued by designated offices located at the stations. Regular tickets are available at the ticket vending machines located at each station. 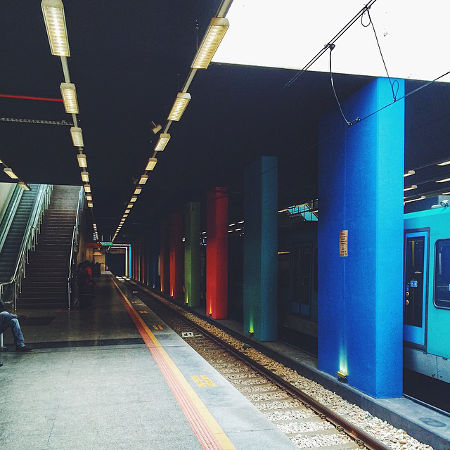 Burulaş offers passengers many services to make their journey safe, comfortable and enjoyable.

Make sure you are aware of Bursaray rules before you use the service.

These are few tips to better use the Bursaray system.

Map via www.burulas.com.tr
See map full resolution. It may take a little bit to load.