The system has four lines, three underground and one overground, making it a quick and efficient mode of transport around the biggest city in Canada, along with the bus and tram lines. Travelers can use all of these with only one ticket. Because of high demand and the city's expansion, a fifth line is in construction and there are plans for a sixth to be built.

The first Canadian metro line was called The Yonge and first opened it's doors in 1954. Today's metro still uses the section of the original line. The Yonge was built to replace an old tram line running from one end of Yonge Street to the other, with the objective of modernising the transport system to fit in with the growing town.

After many debates on how and where to expand the metro lines, the Bloor-Danforth was built in 1966, which is now what we call line 2. As these were the only two lines in the area, they both received many extensions between 1966 and 1980.

In 1985, line 3 was opened, an overground line in the Scarborough district. There was talk of turning line 3 into an underground line but instead line 2 was extended towards Scarborough, leaving line 3 redundent.

Line 4, the most recently opened and the shortest system, started running in 2002, completing the routes we have today. Being the second most used metro system in the country, the Toronto metro system is always undergoing extensions and refurbishments. The biggest projects being the construction of a Line 5 and eventually a Line 6. 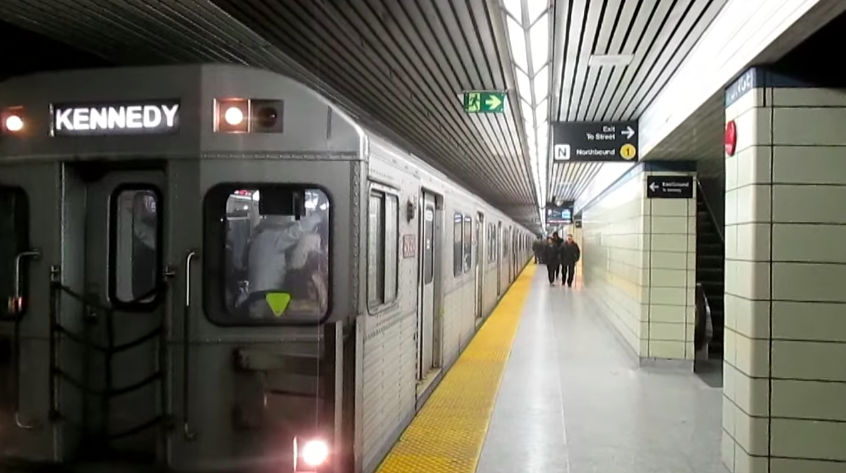 The Toronto metro consists of four open lines and the fifth, which is undergoing construction, is scheduled to be running by 2021. Out of these four lines 3 of them are mostly underground, with the exception of Line 3 which is overground. Each line has a number, name and colour to tell them apart. However, people either use the name or number to identify them, not the colour.

These four lines, spread out over 76.9 kilometers, have all together 75 stops making it the second largest in Canada.

Line 1 is the oldest line in Toronto and the most used in all of Canada. This route is 'U' shaped, beginning at Finch Avenue, a station in the north east, heading south towards Union Station and then coming back on itself all the way back up to Vaughan Metro center, returning to the north east. 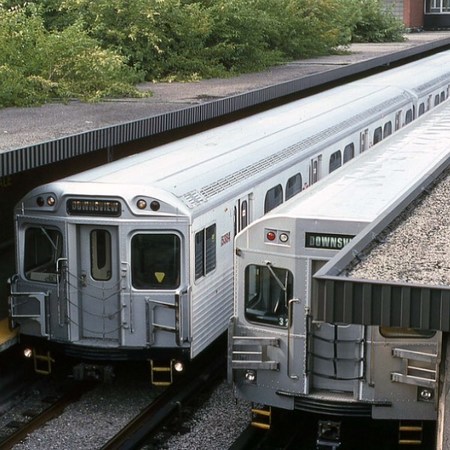 Line 2 travels through Toronto east to west, starting at Kipling station heading straight through the middle of the city of Toronto finishing at Kennedy station. Kennedy Station is also connected to Line 3 and eventually Line 5 will also be a part of it.

Line 3 is the only line mostly above ground and extends over 6.4 kilometers. This line starts at McCowen station and reaches all the way over to Kennedy station, where it connects with Line 2 and eventually Line 5. Line 3 is also special as it doesn't leave the Scarborough district. 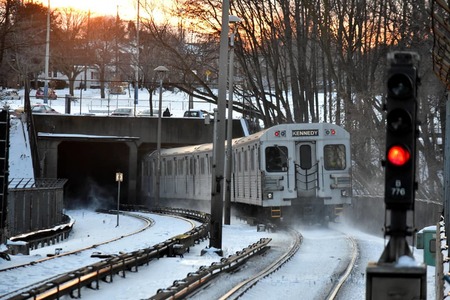 Line 4 is the most recent addition to the metro system of Toronto, and also the shortest, covering a distance of only 5.5 kilometers. Line 4 travels east to west through the North York district, starting at Don Mills Station and ending west side at Sheppard-Yonge. Here is where you can connect with line 1. This line stands out because each station on route has murals painted on the walls.

The four lines of the Toronto metro system are open from 6:00 am to 1:30 am from Monday to Saturday and 8:00 am to 1:30 am on Sundays and holidays. The lines run 365 days a year, however on the 25th of December and the 1st of January they open later, at 9:00 am. There are also some other holidays that timetables are likely to change. 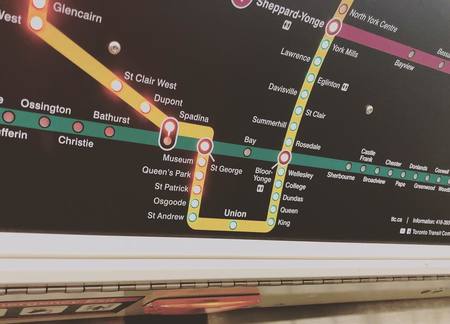 The stations along the lines have different opening times;

All the lines have the same frequency of trains passing by. Every 2-3 minutes at peak hours and every 4-5 minutes the rest of the day. At the end of the day and on Sundays the amount may reduce.

The connections between lines are always free as long as you don't leave the station.

Connectios with other systems:

The Toronto Metro System is well integrated into the transport system as it is run by the same company that runs the buses and trams in the city. The transfer between different services is free, when it is on the journey that you have paid for. In order to do return trip's you need to get an unlimited pass.

Ticket transfers are free but are not sold with your ticket. To be able to transfer your ticket, you would need to present a transfer form that you can get from your driver, either when you buy or present a ticket on the buses and trams. In the metro stations there are red boxes from where you can print out these forms. 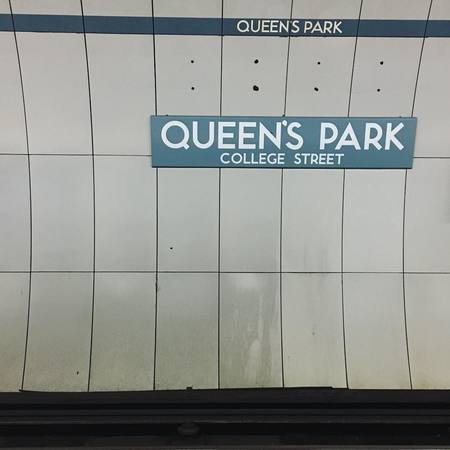 You can buy many different tickets and passes in the ticket offices in all the stations, some stations have ticket vending machines, paying the driver directly on the tram or bus or in any shop with the TTC logo in the window. There are three ways you can pay for your trips; you can buy tokens, individual tickets or you can use your PRESTO card.

This ticket is valid for a one way journey including transfers. You can´t stay long at each stop and the ticket is not valid for return.

You can buy your tokens from token machines located at most stations, these machines only take cash. Each trip using tokens is cheaper than buying an individual ticket, however, you have to buy 3 tokens at a time. You can also buy the tokens in packs of five.

The presto card is an electronic card that you can top up with passes or tickets. The card itself, costs C$6.00 (US$4.70) and each trip with this card costs C$3.00 (US$2.30). You can buy and top up the presto card online at www.prestocard.ca or you can also top up at the PRESTO machines in the metro stations.

This pass is valid to travel on all of the Toronto Transport Comission (TTC) systems, unlimitedly. It is valid from the day of purchase and can be used until 5:30 am the next day.

This pass permits you to travel unlimitedly from Monday to Friday on the week of purchase.

This pass is unlimited from day one of the month to the last day. The monthly pass is available to purchase from the 24th day of the previous month. 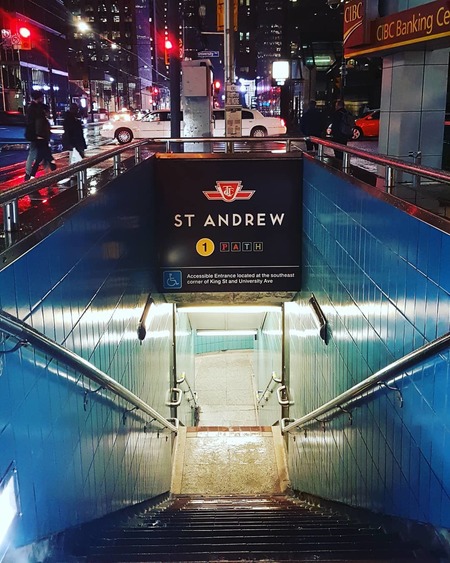 Parking at the stations (Park&Ride)

The TTC offers parking for your vehicle in 17 different stations where parking could either be free or charged, depending on the time. The conditions and prices of parking may vary but usually Monday to Friday, 5:00am to 2:00am, you will have to pay to park your vehicle. Some stations allow you to park for free over weekends and holidays. Although parking hours differ station to station, you are not allowed to park your car all day at a station (5:00AM-2:00AM)

The prices may vary, but the tariffs for parking surrounding the stations are around C$2.00 (US$1.56) between 3:00pm and 2:00 am and C$7.00 (US$5.48) per day. You can pay by cash or by card; VISA, Mastercard and American Express. Some stations are now using an App called 'Mobile Pay' which allows you to reserve and pay online for your trip.

Currently, the Toronto Metro System is undergoing construction. A fifth line being added to the system.The new line is called Eglintonse and will consist of 25 stations - 15 of which will be underground. The line will travel from East to West, parallel to Line 2, beginning at Kennedy Station and finishing at Mount Dennis West. It is forseen that Line 5 will be open to the public by 2021.

The construction of Line 5 is the only building work that is currently under-way, but there are plans that have been approved that are now being finalised. For example, Line 6 is planned to take you from Finch West to Humber College in the west.

There are also talks of demolishing of Line 3 and extending Line 2 to cover the lost area.

There are two main airports in Toronto; Toronto Pearson International Airport and Bily Bishop Toronto City Airport. As the airports are both in the city, it is possible to get to both Airports paying with just a basic ticket, on any form of transport.

There are different ways of getting to this airport.As there is no direct Metro route, you will need to take the metro to a bus stop, where a bus will then take you directly to your terminal.

52A LAWRENCE WEST: Take Line 1 until you arrive at lawrence or Lawrence West and then transfer to bus #52A. This bus will take you to the airport in 90 minutes in rush hour, but should take 70 minutes the rest of the day. This route is open from 5:30am to 1:00am all seven days of the week.

300A Bloor-Danforth: This route is the only option to arrive at this airport inbetween 2:00am and 5:00am, any day of the week. Get on this route at Bloor-Danforth. It takes about 45 minutes to get to the airport.

Again, There is no direct route on the Metro to get to this airport, although you can get to the tram stops that will take you to the airport from the Metro.

FROM UNION STATION: Get on line 1 until Union Station and then change to tram #509 Harbourfront.

FROM BATHURST STATION: Get on Line 2 until Bathurst Station and then change to tram #511 Bathurst.

What to see while on the metro

CN TOWER: At one point the tallest building in the world, the CN Tower measure´s 553.333meters. The tower has transparent floors so you can look through all of them and admire the hieght of the tower or you can observe the views of the city. The tower is only 10 minutes from Union Station, on Line 1.

THE DISTILLERY DISTRICT: The distillery district is part of the old town and is a wonderful place to take in the charm of victorian Toronto. The area is full of beautifully restored buildings, boutiques and restaurants. Queen Station, on Line 1, is only ten minutes away on foot, but to save walking you could also get on tram #501 from Queen Station. The price of this tram ride is included in your ticket, making it a free alternative to walking.

SAINT LAWRENCE MARKET: This market has been open since 1803, even though the buildings it is now in were only built in 1850. The market is divided up in three sections that all specialise in their own products. You will find many different farmers produce and is the best way to try local food. Lawrence Station on Line 1 is only five minutes away on foot.