SkyTrain is the metro service in Vancouver, Canada. It was opened to the public on December 11th, 1985. It has 53 stations and three lines. The metro makes connections with buses, ferries and other trains. It goes directly to Vancouver International Airport. The stations open around 5:00 am and close around midnight. Ticket prices start at $2.75. As a tip, buy a two zone ticket if you want to go from YVR-Airport station to any other station. Do not block the metro's doors since the metro would be delayed. As a fun fact, part of the movie Minority Report was filmed in the metro. A new line called UBC Line will be opened. You can use the metro to go to attractions like Grouse Mountain.

The metro was inaugurated on December 11th, 1985. The first plans to have a train system in Vancouver were the construction of a monorail during the 1950s, but the idea was scrapped. However, the government of Vancouver wanted once again to build a train service since the city was elected to host Expo 86.

The metro has 53 stations and three lines: the Expo Line, the Millennium Line, and the Canada Line.

The metro makes connections with other means of transportation belonging to TransLink. In other words, with a metro ticket, you can transfer to ferries from the SeaBus service, and buses. The metro also makes connections to transportation services from other companies, such as buses from the B-Line service (owned by Coast Mountain Bus Company,) the commuter railway of West Coast Express (owned by West Coast Express Ltd.), and the trains from Via Rail (owned by the Canadian government). Some of the connections available at each station are the following:

The closest airport to Vancouver is the Vancouver International Airport. The metro goes directly to this airport via YVR-Airport station. The trip between downtown Vancouver and this airport lasts around 30 minutes via the metro.

Each line has their own departure frequency and opening and closing times for their stations.

b) Opening and closing times for stations:

b) Opening and closing times for stations:

- Millennium Line: It has only one route. 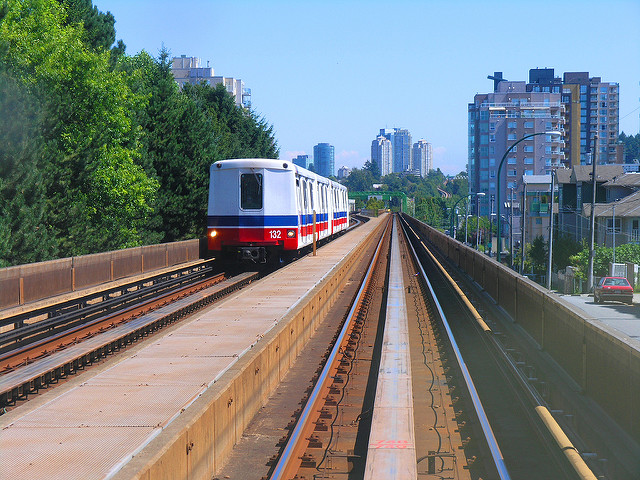 You can pay for your ride with tickets or with the Compass Card.

- Cards: The main card is the Compass Card. Other cards available are the Handy Cards, and the Concession Cards. You will have to pay $6 to get a Compass Card, which will be refunded if you decide to return the card. To use the Compass Card, you need to load passes or cash into it.

You can bring bicycles for free. You can bring folding and electric bicycles as well. The maximum number of bicycles allowed per train is two in the Millennium and Expo lines, and one in the Canada line. Bicycles are allowed 24/7 in the Canada Line. However, during the following times at the following stations, bicycles will not be allowed in the Millennium and Expo lines.

Security in the metro is offered by the Transit Police. You can call them at 001 604 515 8300. Dial 911 in case of an emergency. If you call 911, provide the mode of transit (SkyTrain in this case,) the direction where you are travelling, and the city or the last station that you were located. You also need to provide the train’s vehicle number, which is located both inside and outside of the train, both in the front and the back of the train.

The metro is monitored at all times by the metro staff.

There are many ways in which you can report emergencies in the metro. Each train has a speakerphone that allows you to talk to the operators of the metro. Next is the Silent Alarm, which is an alarm located above the train's windows that silently calls the train operators in case of an emergency. The third emergency feature is the emergency cabinets at the stations, which contain buttons that stop the metro, an emergency phone, and a fire extinguisher. The fourth feature is the Designated Waiting Area, which are waiting areas monitored by cameras that have emergency phones. The security cameras monitor the escalators, elevators, stations, and ticket booths.

The metro staff know how to give first aid. Besides that, they can help you with any issue at the metro or at the stations. The metro staff will ask anybody at any time to show their tickets.

Next, Expo Line's railway will be expanded. This line will have approximately 3.6 miles (six kilometers) of new railway. This new railway will allow rides from King George Station to 168 Street, 152 Street, the Fraser Highway, and Guilford.

The UBC Line will be made by 2020. It will cost almost $3 billion. The UBC line will offer rides throughout Broadway Corridor. The UBC Line will allow connections from the VCC-Clark station to new stations in University of British Columbia and Arbus Street. The 99 B-Line bus service will be replaced by this line.

The YVR-Airport station will be used as a reference point. To go from this station to the closest touristic attractions by using the metro, follow these instructions:

1) Grouse Mountain: The trip lasts one hour and 20 minutes, and costs 9$. From YVR station, board the metro in the Canada line, and travel for 25 minutes towards Waterfront. Get off at Vancouver City Centre station. Next, walk to Westbound West Georgia Street at Granville Street. Board bus 246, and travel for 20 minutes towards Highland. Get off at Northbound Highland Boulevard at Woodbine Drive. Then, board bus 232, and travel to Grouse Mountain for 15 minutes. Get off at Mountain Skyride. Finally, walk towards 6400 Nancy Greene Way, North Vancouver.

2) Kitsilano Beach: The trip lasts 40 minutes, and costs 9$. From YVR station, board the metro in the Canada line, and travel for 20 minutes towards Waterfront. Get off at Olympic Village station. Walk to Westbound West 2 Avenue at Cambie Street. Board bus 84, and travel for 10 minutes towards UBC. Get off at Westbound West 4 Avenue at Vine Street. Finally, walk towards 2305 Cornwall Avenue, Vancouver.

3) Gastown: The trip lasts 35 minutes, and costs 9$. From YVR station, board the metro in the Canada line, and travel for 25 minutes towards Waterfront. Get off at Waterfront Station Canada Line. Walk to Eastbound West Hastings Street at Granville Street. Board bus 95, and travel for three minutes towards SFU B-Line. Get off at Eastbound West Hastings Street at Cambie Street. Finally, walk towards Gastown.

5) Granville Island: The trip lasts 30 minutes, and costs 9$. From YVR, board the metro in the Canada Line, and travel for 20 minutes towards Waterfront. Get off at Olympic Village station. Walk to Westbound West 2 Avenue at Cambie Street. Transfer to Bus 50, and travel for five minutes towards Waterfront Station. Get off at Westbound West 2 Avenue at Anderson Street. Finally, walk to Granville Island, Anderson Street at Johnston Street, Vancouver.

Map via infomaps.translink.ca
See map full resolution. It may take a little bit to load.