The Montreal Metro System is operated by the Montreal Transit Corporation (STM) that is also in charge of the city bus system.

The system as a whole has 68 stations spread over an area of 69 kilometers and spread over four different metro lines that overlap with each other at different points. The metro system can be recognized on the streets and on the different maps due to its blue square logo with a white arrow in the centre, pointing downwards.

The Montreal Metro System isn’t only a fast transport system that is the most used in Canada, but it’s the third most used by people throughout North America, behind the New York Metro and that of Mexico City. 52 years after it’s creation, the Montreal Metro is still the most important means of transport in city, with more than one million trips per day.

The Montreal Metro System had encountered numerous problems before the construction plans were approved. From 1910, different proposals were submitted, but were rejected and postponed when the city had to face the consequences of the First World War, the Great Depression and the Second World War. The final plans reused several of the plans that had been previously proposed and they were finally approved in 1961.

The construction of the first two lines, the green and orange lines, started in 1962 and these lines gradually began to work from 1966.

The original plans included a third line that would use some of the existing rail lines to reach the northwest of the city. Whilst the plans were waiting to be approved, Montreal was chosen to host Expo 67, a large global fair designed to show off the achievements of different nations.

The fair forced the city to reconsider their plans and finally they decided to construct a fourth line to transport the large quantity of visitors that they were expecting to receive. Line 4, or the yellow line, started working in 1967; but during the construction, line 3 was cancelled. The result is a metro system with interrupted numbers that only contains the lines 1,2,4 and 5.

The success of the yellow line meant that Montreal was chosen to host the 1976 Olympic Games, this again forced the city to adapt to these new events. As part of the new and approved plans, they decided to extend lines 1 and 2 and construct an additional line; line 5, or the blue line.

Through these projects and proposals that were approved, as the Montreal Metro System had to adapt to the development and demands of the city; the green line reached its current extension in 1976, the blue line reached it in 1988 and the orange line accepted its last addition in 2007. The yellow line hasn’t received any extensions since its initial construction in 1967. 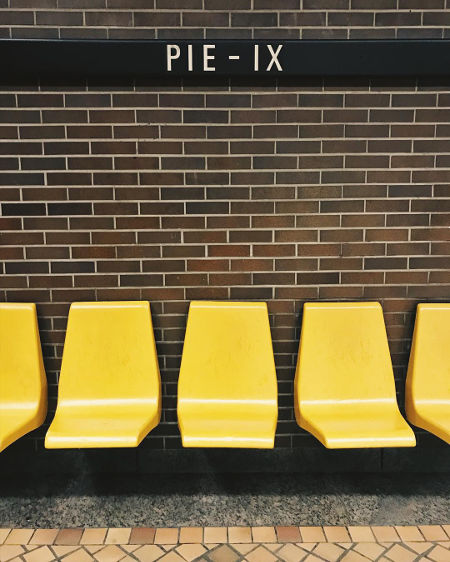 Currently there are new plans being considered. Some have been approved and others are still under discussion, but the majority are focused on extending existing lines and not adding additional lines.

The Montreal Metro System has four different lines that are operated by the Montreal Transit Corporation, they are distributed throughout the city to take users to the north, east and centre of the island of Montreal.

Together, the four lines have 68 stations spread over 69 kilometers. Every line has a number and a color that make it easy to identify the different lines on the maps. Usually the color of each line is used to refer to each of them.

The line stretches over 22 kilometers, most of this runs through Montreal from northeast to southwest, passing under the city’s commercial zone and connecting the Angrignon terminal to the south, with Honoré-Beaugrand to the north.

At 30 kilometers in length, this line is the longest of the four lines on the Montreal Metro System. The line follows a “U” shaped path that connects the Côte-Vertu terminal in the northwest with the Montmorency terminal in the Navel city north of Montreal.

At only 4 kilometers in length, this is the shortest line in the system and it was also the first line to leave the island of Montreal. The yellow line connects the Berri-UQAM terminal with the Longueuil-Université-de-Sherbrooke terminal, passing through the tunnel that goes under the St. Lawrence River. It was initially constructed to be able to transport the large amount fo visitors that they were expected to receive because of Expo 67. 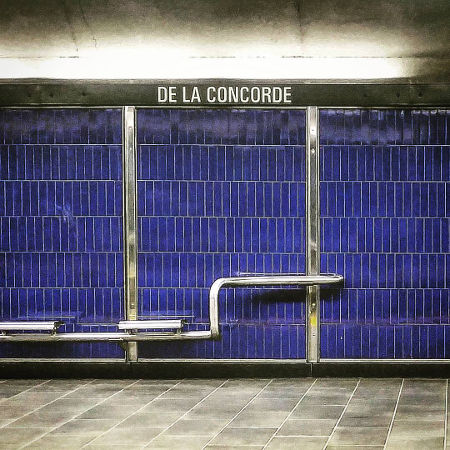 This is the most recent line of the Montreal Metro System and is 9.7 kilometers long, you can depart from the Snowdon station on the orange line and go to the Saint-Michel terminal in the northeast.

The Green Line and The Orange Line:

The yellow line runs every day of the week from 5:30am until 1:00am, except on Saturdays when the service is extended until 1:30am. During peak hours (7-9am and 4-6pm), trains pass every 3 to 5 minutes and every 5-10 minutes at weekends.

The connections between lines are free when you don’t leave the station.

Connections with Other Systems:

The Metropolitan Transport Network (Réseau de transport métropolitain) is a public transport company that operates in the Montreal region, offering a regional train service to Montreal, Laval and the surrounding communities. The company offers two types of tickets: Tram and Train. The tram tickets offer free connections to the entire metro system in Montreal and to the city’s bus system. However the Montreal Metro doesn’t offer tickets that allow users to go onto the trains of the Metropolitan Transport Network.

The OPUS card is an electronic card of which you can upload the different available tickets and passes. These cards can be purchased at any metro station’s machines or windows. It’s non-refundable and is valid for four years. To benefit from the reduced rates, users who meet the conditions (children or over 65 year olds) must have an OPUS card with a picture. Price of the card: 6 Canadian Dollars (US $4.6) 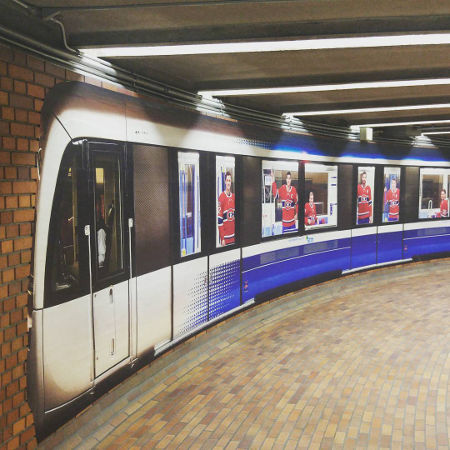 You can buy the different types of tickets in the machines and windows that are found in all metro stations and at points of sale that are distributed throughout the city.

Unit Ticket: This ticket is valid for a single journey, but it includes transfers from the bus to the metro; or vice-versa. This ticket is valid for 120 minutes from the first validation. This is the only ticket that you can buy directly on the buses, but only by giving the exact amount of money (the drivers don’t offer change). Price: 3.25 Canadian Dollars (US $2.49)

Ten Route Ticket: This ticket is valid for ten trips and includes a free connection between the buses and metros for each trip. It’s cheaper than buying a Unit Ticket for each separate trip. Each of the ten journeys is valid for 120 minutes from the first validation. Price: 27 Canadian Dollars (US $12.6) Reduced Rate: 16.50 Canadian Dollars (US $12.6)

Unlimited Ticket for 3 Days: With this ticket, you can travel unlimitedly on the buses and metros for three days (72 hours) from the first validation of the ticket. Price: 18 Canadian Dollars (US $13.8)

As well as the tickets that focus on casual users, the Montreal Metro System also offer different passes for more frequent users.

Monthly Pass: Valid from the first to the last day of the month. Price: 83 Canadian Dollars (US $63.4)

Different plans have been proved to extend the system and adapt to the development of the city, but not all of the plans are in the construction phase. Some were approved while others are in the process of discussion. Some of the most important expansions are:

Although Montreal has two airports, only one of them receives commercial passenger flights, the Montréal-Pierre Elliott Trudeau International Airport, known simply as Trudeau Airport. None of the four lines of the Montreal Metro System go directly to the airport, but there is a bus that leaves passengers at 2 subway stations.

The 747 bus is part of the company responsible for the Montreal metro and bus system, so buying a ticket for the 747 bus allows you to travel on the metro and some of the metro tickets also allow you to use this service:

Ticket for the 747 Bus: The ticket costs 10 Canadian Dollars (US $7.64) and as well as allowing you to travel on the 747 bus, it also allows you to travel unlimitedly on the buses and metros for 24 consecutive hours from the first validation.

Metro Tickets That Allow You To Travel 747:

The 747 service operates 24 hours every day of the week and offers two different services:

What to see whilst using the Montreal Metro

The old part of Montreal (Vieux Montreal): This part of the city is without a doubt one of the most visited places by tourists and appreciated by its residents. It’s full of cobbled streets, galleries and restaurants with a charming European air. Its buildings date back to the seventeenth and nineteenth centuries, and include the twin towers of the Basilica of the Notre Dame and Place Jacques Cartier. The Place d’Armes stations and the orange line will take you directly to the old part of Montreal.

Parc Jean Drapeau: This is the park where the famous Expo 67 world fair was held. Today it’s a museum that is dedicated to ecological themes and full of activities that are suitable for the whole family. Around the museum, you will find other attractions like the La Ronde amusement park and the Stewart Museum. The yellow line takes you directly to the island where all of these tourist sites are located.

Botanical Gardens: Known as Parc Maisonneuve, the Montreal Botanical Gardens contain a mixture of Japanese gardens, Chinese gardens, greenhouses and exhibitions of orchids and bonsai. The Pie XI station on the green line is a five minute walk from the botanical gardens.

Rue Sherbrooke: This is without a doubt one of the most elegant parts of the city and is home to some of the most important museums and institutions in the city, like the McCord Museum, the Musée des Beaux Arts and the McGill University. The McGill station on the green line is a few minutes walk from the McCord Museum and the McGill University, whilst the Peel station that is also on the green line, leaves you closer to the Musée des Beaux Arts.