Lyon metro serves the french city of Lyon since 1978. It has 4 lines and 42 stations. Most of its 31,5 kms of tracks run underground, except for a Line C section. Its public transport system consist of buses, trolleybuses, trams, light rail, funiculars, metro and regional trains. Most of them are operated by TCL (Transports en Commun de Lyon). Lyon Metro daily ridership is over 700,000 passengers.

Lyon has one of the largest public transportation networks in France, being second only to Paris. It draws inspiration from the Metro in Montreal, Canada. Lyon Metro is a public transportation system owned by TLC. It was opened in 1978. There are multiple museums for tourists to visit within the range of the metro. It connects to other railway networks such as Rhonexpress. Most cars in Lyon Metro use rubber tires. Most of the driving system of the cars is either partially or fully automatic. The metro’s ticket can be used for transferring to other vehicles, such as buses and tramways. It starts operations at around 4:30am, and runs until midnight. It has 40 stations, comprised of four lines. The metro accepts either tickets or cards. Its ticket prices start at two euros.

Lyon is a relatively quiet city in France located around 500 km from Paris. It has a population of around half a million people, and it is one of France’s largest cities. Lyon is an important city and a touristic attraction famous due to its silk production, museums, food and also for being the birthplace of movies. There is a celebration in this city related to lights called Fete des Lumières.

A company called SYTRAL owns the metro and all of its machinery but the system itself is owned by the Transports en Commun de Lyon (TCL) brand, which belongs to the Keolis Lyon. TCL is an agency which controls public transportation in the city of Lyon. It covers transportation of over 600 kilometers square. 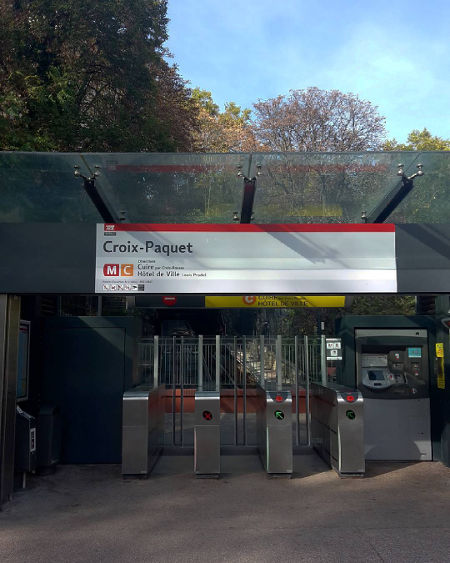 It has four lines: Line A, Line B, Line C, and Line D. Line C is the only line that uses steel tires. The rest of the lines’ cars use rubber tires. Some of its stations have peculiarities, such as being on a steep mountainside, or having colorful decorations. In 2014, Lyon’s Metro got almost 200 million passengers. The metro goes at 80 km/h of max speed. Other public and private vehicle networks associated with Lyon Metro are: Rhonexpress, Dragonfly, Full Moon, Optibus, as well as trams, buses, and the trolley bus.

A little bit of history

Lyon had its first underground train in 1862, way before anyone else in the world had one. The first idea of an underground railway was made by the engineer Joseph Jaubert. However, this first draft was scrapped, and no rail was built. Then, in 1897, TCL and a competitor wanted funds for making an underground train. TCL won, and they made funiculars in Croix-Rousse. These funiculars were later adapted to line C of Metro Lyon. Later, a 14 station train network was planned, but the idea was later abandoned. The first successful draft for the metro was approved in July 22, 1963. Finally, Metro Lyon was built by a research metro company led by René Waldmann. It took around four years to construct the rails of line B, which started in 1973. Lines A, B, and C were ready by the opening day of Lyon Metro. Line D appeared in a later date.

The metro’s lines had multiple expansions. Line B was first expanded in 2000. In 2013, line B got expanded again, in which it got around 2 km of extra rails. Line C was expanded in 1984.

It has 14 stations. It is approximately 9 km long. It is identified by the color red. A trip in this line lasts for around 25 minutes. It uses MPL 75 trains. All of its trains use rubber tires. It opened to the public in 1978, and it was expanded in 2007. It has an everyday attendance of around 250,000 people. Its trains have three cars. The trains go above a river. It is driven by using a semi-automatic system. It connects to places such as: The Museum of Fine Arts of Lyon, Place of Terraux, City Hall, Opera of Lyon, House of the Book, Astroballe, Square of Silk, and the Hippodrome of Lyon. They also make trips to the airport, by making a connection with the privately owned Rhonexpress trains. 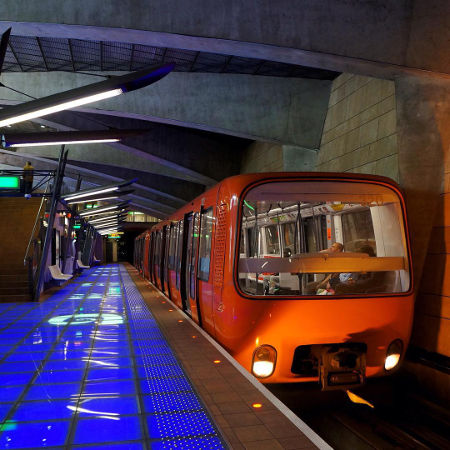 This line has 10 stations. It is identified by the color blue. Its length if of approximately 8 km. A trip lasts around 20 minutes. Its trains use rubber tires. The train is semi-automatic. Although its train cars have drivers, there are plans to convert this line to be fully automatic. It uses MPL 75 cars. It has a daily attendance of around 130,000 people. Most of its rails have a single track. There are also plans for expanding this line to include two new stations. It goes to places such as the Part Dieu Shopping Center.

It has five stations. It is identified by the color orange. Its length of tracks is of approximately 2 km. A trip from end to end lasts around 10 minutes. It has a daily attendance of around 30,000 people. This line opened in 1974, before Metro Lyon existed. This line has trains of two cars. The trains use the car model MCL 80. This line is famous for having a steep slope. Unlike the rest of the other Lyon Metro lines, this line has steel wheel train cars. This railway system is manually driven. It goes to places such as the hospital, and the Museum of Fine Arts.

It has 15 stations. It is identified by the color green. Its trains use rubber tires. A trip in this line lasts a little less than 30 minutes. It has around 270,000 passengers each day. It uses MPL 85 cars. This line is unique compared to the other lines because its cars are completely driverless. Another technology that makes this train’s cars unique is an infrared sensor that stops the trains if there is an obstacle in the tracks. This is why there are no doors to protect people from walking into the rails. The length of its tracks is of 12.5 km. This line opened to the public in 1991. It goes to places such as the Parilly Park, and the Historic Courthouse of Lyon.

There are funicular stations associated with the Lyon Metro. They are the following:

Lyon Metro’s cars can connect to other transport services at the following stations:

Saint-Exupéry Airport is Lyon’s airport. Currently, the only way of getting to Lyon’s airport is through the privately owned Rhonexpress. The closest Lyon Metro station is line B in Part-Dieu. The trip from Part-Dieu to the airport lasts around 30 minutes. To get to Part-Dieu from the airport, take Tramway 3 (also run by TLC). From there, take a Rhonexpress train.

Schedule, timetables, and hour of operations:

The timetables for each line are the following:

Parking services for cars are available from Monday to Sunday, from 1:30am to 1:00am.

In Lyon Metro, as well as other public vehicles owned by TCL, a person could use the same ticket for all vehicles during one hour without needing to validate the ticket. TCL gives information and offers Lyon’s Metro tickets from Mondays to Saturdays. TCL gives tickets and information from Monday to Friday, from 7:30 in the morning to 7:00 in the evening, and on Saturdays, from 9:00 in the morning until 6:00 in the evening.

A single ticket can take you to any distance, and it can be used for transferring into a bus, tramway, or funicular. It can be used only for one hour from when the ticket was validated. The same ticket can be used as a return ticket, as long as it is used within the hour period.

You can pay a subscription for students (both national and international) who are under 29 years old. To obtain it, you need to bring the following to a TCL office:

There are parking facilities for metro and bus users. Try not getting to late. It's free of charge if you hold a TLC ticket or Card.

Line D will get 30 new trains. Lines A, B, and D will also have more trains. There are four more metros with rubber tires planned to be added to lines A, B, and D. They will be able to transport around 300 people. These new trains will be 36 m long. Also, these new train’s brakes will work using only electricity.

There are 22 museums within the metro’s reach, including the Museum of Fine Arts. There is also the Mini World Lyon Park. Also, a boat trip on a river is available.

There are many attractions a places of interest for tourists within the range of Lyon Metro. Among them are the following: