Porto has a light rail transportation system that mostly resembles a tram. There are 6 lines, 81 stations and a 67-kilometer (42-mile) route.

Service is available from the metro to the Francisco Sá Carneiro Airport.

Porto has a light rail metropolitan transit system that mostly resembles a tram. However, it can be distinguished by the exclusive routes it serves and the streets solely accessible by its vehicles.

The system serves seven of the metropolitan’s municipalities. There are 6 lines extending 67 kilometers (42 miles) with a total of 81 stations. 14 are below ground.

The system provides service to and from the Francisco Sá Carneiro Airport, through a line that reaches the city center.

The Porto Metro’s operating partners are: The Metropolitan Area with 39.99% share, the Portuguese State with 40%, Public Transport Society of Porto with 16.67%, CP Caminhos de Ferro Protugueses E.P with 3.33% and Cámaras Municipales do Porto, V.N. Gaia, Matosinhos, Maia, Villa do Conde, Póvoa de Varzim and Gondomar.com with a 0.0005% share.

The Porto Metro consists of 81 stations located along 6 lines. Each line is identified by a letter and a color. The central system’s main corridor is Trindade through which all the lines pass. 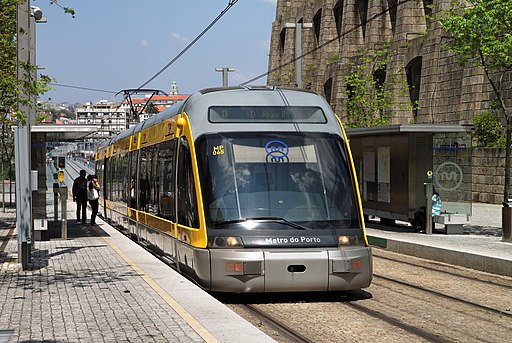 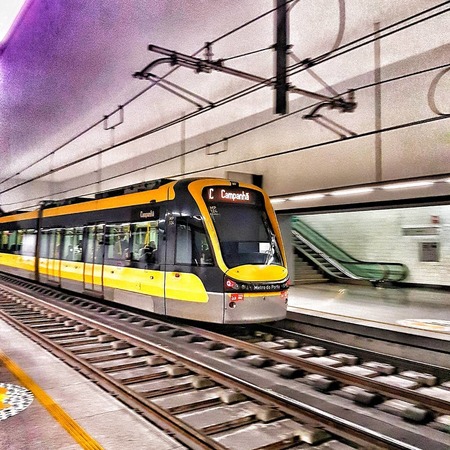 This line is distinguished by the color red and connects Estádio do Dragão to Póvoa de Varzim. It travels through the Do Condo region. There are 35 stations, covering 33.6 kilometers (20.9 miles). The total trip duration takes about 61 minutes.

This line can be identified by the color green and travels from Campanhã to ISMAI. It covers 19.6 kilometers (12.2 miles) and includes 24 stations. The total trip is 41 minutes and trains arrive every 15 minutes. 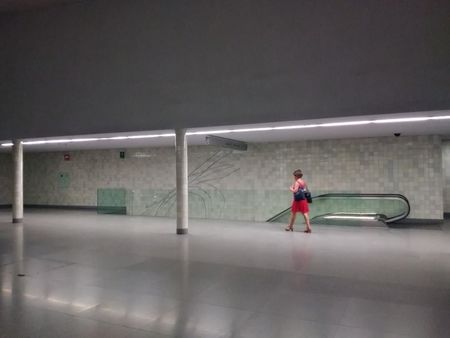 Distinguished by the color yellow, this line runs from Hospital São João to Santo Ovídio. It crosses the river from north to south. There are 16 stations extending 9.2 kilometers (5.7 miles) and the total trip takes about 25 minutes. The train frequency on Line D is every 6 minutes. 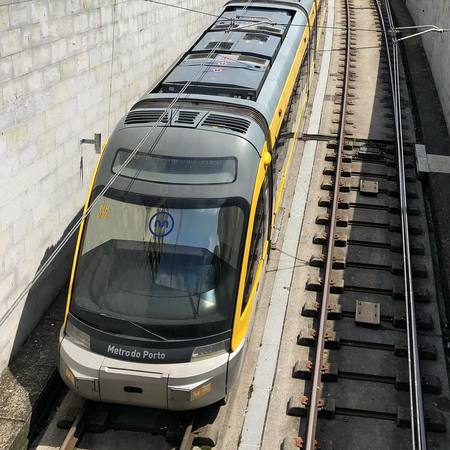 Known as the Airport Line, this is distinguished by the color, violet and connects Estádio do Dragão station to the Airport. It is 16.7 kilometers (10.4 miles) and has 21 stations. The total trip lasts 35 minutes and each train arrives approximately every 30 minutes

Line F is known as the Gondomar Line and it is distinguished by the color orange. It runs from Fânzeres to Senhora da Hora. There are 24 stations that make up its 67.4 kilometers (41.9 miles) and the total trip duration is 39 minutes. Train frequency is every 15 minutes. 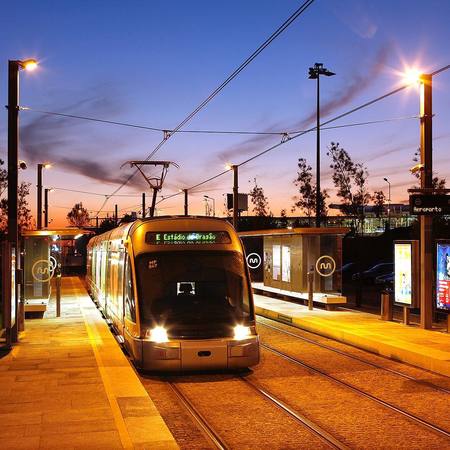 The funicular railway travels from Batalha to Ribeira. There are only two stations along this 300-meter (984.3-mile) route. The trip is extremely short, just 3 minutes and the frequency is every 4 minutes.

Trains operate from 6:00 a.m. to 1:00 a.m. from Sunday to Monday. However, on Fridays and Saturdays, the metro partners with the program, Move Porto and the schedule expands to 24 hours on Lines A (Blue) and D (Yellow).

Train frequency is every 4 to 15 minutes, depending on customer demand.

Below are the connections that can be made on Line A (Blue):

Below are the connections that can be made on Line B (Red):

Below are the connections that can be made on Line C (Green):

Below are the connections that can be made on Line D (Yellow):

Below are the connections that can be made on Line E (Violet):

Below are the connections that can be made on Line F (Orange):

The stations that provide connections to other systems include Campanhã, São Bento, and General Torres with the Comboios de Portugal (CP) railway and the Airport station to the Francisco Sá Carneiro Airport.

The Porto Metro ticket system is multipurpose and offers access to all the city’s transportation systems.

This is a contactless chip card (riders can simply pass through entry points with it in their baggage, rather than taking the card out to be scanned). A basic ticket covers two zones and costs €1.20 ($US 1.37). 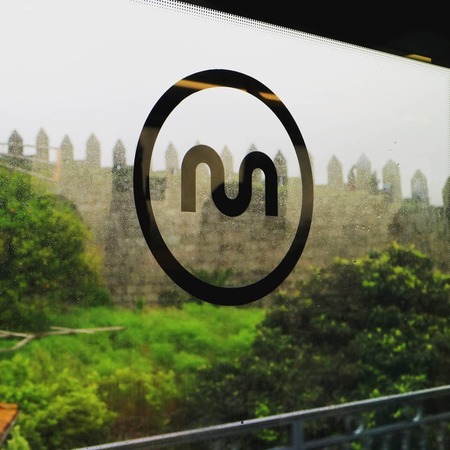 Monthly subscription - Andante Card: Designed for frequent travelers, this card is personalized and can be reloaded according to the number of areas or zones that the rider frequents. It can be reloaded at both terminals and automated machines.

The system also offers discounted tickets to low-income families, people age 65 or over, and students of primary, secondary, and intermediate to high-level vocational technical schools.

The Porto Metro offers a daily Park & Ride service that can be used for up to 12 hours with an Andante ticket.

Although Metro Park gates are open from 5:30 a.m. to 1:00 a.m., 24-hour parking is available. Customers may enter and exit at any time by using the intercoms available on the entrance ramps.

Construction is expected to begin in early 2019 and to be complete by 2022. The new lines will meet major demands on both sides of the city and provide daily service to 33 thousand people.

The overall investment for this expansion phase is about 290 million euros. 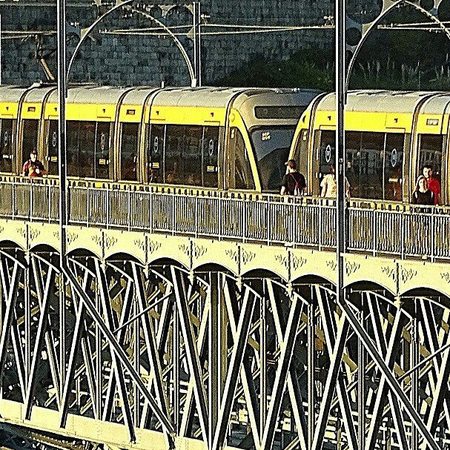 The Porto Metro connects to the Francisco Sá Carneiro Airport.

Getting to the airport

Since May 27, 2006, the Metro’s Violet Line has provided a quick, direct connection between the city center and the airport. (It connects both direct and indirectly to all system destinations as well).

The trip from the airport to this line’s main destinations, the Casa da Música station and the Trindade Station take 22 minutes and 27 minutes respectively. Without transfers, the Andante Z4 card, used for these trips, costs €1.85 ($US 2.10). 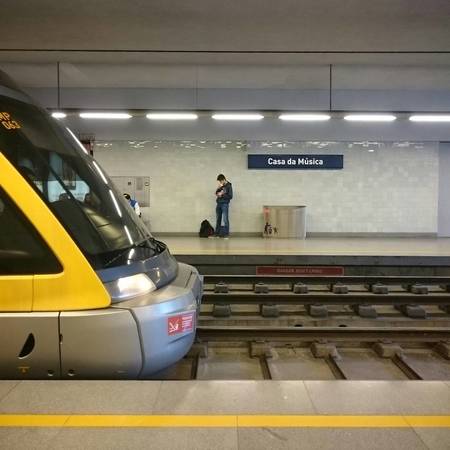 Service is available every day of the year. The schedule operates from 6:00 a.m. to 1:00 a.m. and trains run about every 20 minutes, depending on the schedule and influx of passengers.

Sightseeing via the Porto Metro

The Porto Metro is the perfect answer to touring the city. Including the monuments, major museums, show halls, buildings symbolic of the city, traditional businesses, the best local restaurants and nightlife, the city’s main attractions are easily accessible from the train.

Among the places, characteristic of Porto, is the São Bento Railway Station, where the Convent of São Bento del Avé Maria was constructed at the beginning of the ninth century. Here, one can enjoy over 20,000 titles portraying Portugal’s history.

One can take a train to the vineyards or to some of the region’s beautiful towns, among which are Guimaraes, Braga and Viana do Castelo.

Declared a UNESCO World Heritage site, this historic city center is accessible from the Porto Metro

Other metro accessible sites, characteristic of Porto, include: 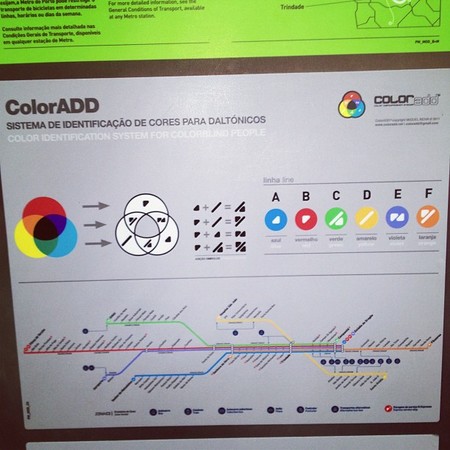 Milestones of the Porto Metro construction

The international public tender for design, system construction, equipment and operation was launched in 1994 and the light rail system began operating in 2002.

Between 1994 and 1999, the approval phase of the network, awarding of contracts, approval of credits and other legal aspects were fulfilled. The first official shipyard installation in Campanhã was completed and the process of shareholder restructuring was finalized in 1999.

The metro underwent constant growth between 2002 and 2011. Below is a list of its major milestones.

Construction was accelerated and in 2002, an experimental phase was carried out that allowed at least 700 thousand residents to take part in the first test trips, free of charge. These tests were completed over the course of 19 weeks along routes that totaled 100 thousand kilometers (62,137 miles). The blue line was inaugurated on December 7, 2002.

Commercial operation began on the blue line in January 2003, and according to March records, just a few months later, the system reached one million riders.

Construction on the Yellow Line (D) in Vila Nova de Gaia also began in March and Ponto do Infante was opened. The yellow line was the sixth to be completed, covering the route over Duero River between Porto and Vila de Gaia.

In the third quarter of 2003, excavation of the Trindade/Bridge and Salgueiros/Trindade tunnels was completed and the Council of Ministers approved the Gondomar Line, the Boavista Line and an extension to Porto International Airport.

The opening of the Funicular dos Guindais created a connection from the riverside area of Ribeira to Batalha. The European Union Cohesion Fund approved the airport link project between Francisco Sá Carneiro and the Varzim line, that consists of a double track connection between the light rail metro system and the trans-European network.

The Blue Line (A) is extended between Trindade and Estádio del Dragáo with the opening of the stations, Bolhão, El Campo 24 de Agosto de Heroísmo, Campanhã and Estádio do Dragão.

Line C (Green) is opened between Estádio do Dragão and Fórum Maia.

Line B (Red) is opened between Estádio do Dragão and Pedras Rubras station, making up 23 kilometers (14.3 miles) and allowing access to the Maia municipality.

Construction begins on Line E (Violet) to connect the Francisco Sá Carneiro International Airport to Estadio del Dragáo. This would make Porto the second Iberian city to connect the metro to the airport.

Opening of the following sections:

On June 13, 2017, the Porto Metro received the International Union of Public Transport’s award for “Best New Light Rail System in a ceremony held in Istanbul.

The new D. João II station in Vila Nova de Gaia on the Yellow Line (D) is inaugurated, making a total of 70 stations on the massive transportation system.

Construction begins on the Orange Line between Estádio del Dragáo and Fânzeres in March.

The Subconcession contract is signed for the operation and maintenance of the light rail metro system in the Porto metropolitan area. This was to be administered for five years by the ViaPorto Consortium.

The Santo Ovídio station is opened on the Yellow Line (D) on October 15.

The Orange Line (F) is inaugurated in January.

On February 7, approval is announced for new connections on the Pink Line between Casa de la Música and San Benito and the expansion of the Yellow Line to Villa D'Este. Map via www.metrodoporto.pt
See map full resolution. It may take a little bit to load.

Some other metro maps of Oporto