The Mexico City Metro, which opened on September 4, 1969, is a subway network consisting of 225kms of double track, 12 lines and 195 stations with capacity to transport more than 4.2 million users per day. The metro serves areas of Distrito Federal and State of Mexico. It is managed by the Sistema de Transporte Colectivo (STC). It's known simply as Metro.

It is a widely used system, with over 4 million daily users. In 2011 it reached more than 7.5 million passengers a day. It is said to be the third subway system by passengers volume globally and the fifth network by extension.

The maximum speed of trains varies from 80 to 100 kms/h depending on the type of rolling (pneumatic vs rail) and the average speed is between 35 and 42kms/h.

The Mexico City metro has 12 lines that are identified by a letter or a number and a color. The total length of the network is 225kms serving 195 stations. Of all the stations, over 60% are underground, specifically 115. 55 stations are at surface level and 25 stations are in elevated viaduct.

It's the pink line. It's the oldest line of the system. It's 19km long and serves 20 stations: 7 transfer stations, 12 transit stations and 2 terminals. There are 19 underground stations and one in surface. The pink line circulates from east to west in downtown.

If you have ever seen images of stations of japanese metro systems and you have found impressive the crowds waiting for boarding, Pantitlán has nothing to envy. Proof of this is this unbelieavable video of Pantitlán at rush hour.

It's the blue line. The line circulates in the city center from south to north. It's 23 Kms long and serves 24 stations: 5 transfer stations, 17 transit stations and 2 terminals. There are 14 underground stations and 10 surface stations.

It's the green olive line. It's 23 Kms long and serves 21 stations: 6 transfer stations, 13 transit stations and 2 terminals. 17 Stations go underground and 4 by surface.

It's the cyan line. It's 10 Kms long. It serves 10 Stations: 6 transfer stations and 4 transit stations. 2 Stations are underground and 8 are overpass (elevated). 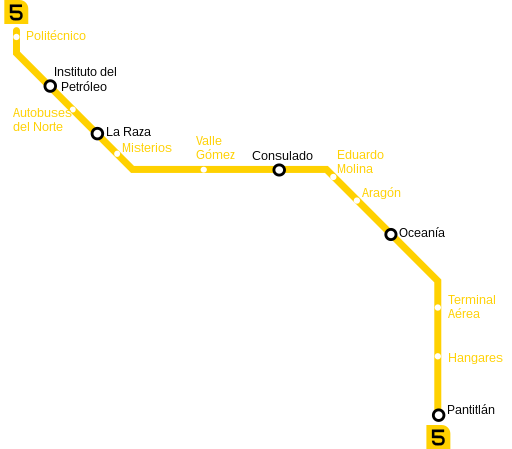 It's the orange line. This line is 18 Km long and has a total of 14 stations. 3 of them are transfer stations, 10 are transit and there is one terminal. 13 stations go underground and 1 go surface.

It's the green line. This line is 20 Km long and has a total of 19 stations. 5 are transfer stations, 13 are transit stations and only 1 is a terminal stations. 14 stations are underground and 5 surface. 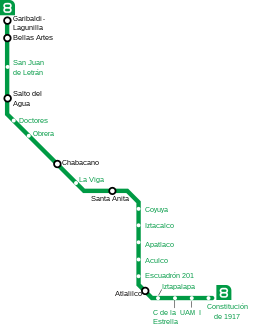 It's the dark brown line. This line is 15 Kms long and has 12 stations. 5 of them are transfer stations and 7 are transit stations. 8 underground and 4 overpass.

It's the purple line. This line is 17 kms long and has 10 stations. 8 transit stations and 2 terminals. Only one station is underground.

It's the green and grey line. It is 23 Km long and has 21 stations. 5 transfer stations, 14 transit stations and 2 terminals. 6 stations are underground, 11 are surface and 4 are elevated.

The price of the metro in Mexico City is very affordable. Since 2013 a single trip is priced at $5 pesos. The single ticket (boleto unitario) allows you to make transfers to other lines without paying an extra fee. This applies across the whole network but line A where you need to purchase a new ticket.

In 2006 the rechargeable cards (Tarjetas recargables) began operating, which are still valid. In 2012 the Federal District Card (TDF) came to replace them but both still coexist. With TDF cards you can use Metro, Metrobus and light rail in Mexico City. In all the metro lines TDF cards and regular tickets can be used except on line 12, where only TDF cards are valid. The price of the card is 10 pesos. You can have a maximum balance of 120 pesos that expires in 300 calendar days.

You can carry your bicycle on weekends and holidays. Student card costs $3 pesos. There also is a free access card for people with disabilities.

In Mexico there is a greater probability of earthquakes. So in the metro will indicate what to do in case it happens when you are riding the metro.

Despite being one of the cheapest metros in the world, since 1969, the rate has been increased 11 times.

It's a democratic system. The ticket price rose to 5 pesos after a survey of its users. From City of Mexico metro reported the improvements needed in the system and how a ticket price rise up would help the system.

In 2014 more than 1.6 billion passengers used the City of Mexico metro. The least crowded station was Tlaltenco on line 12 with 150,000 users and the most used was Indios Verdes with 44 million users.

The Mexico City metro takes into account users with difficulties. Most of the stations are equipped with escalators, elevators, ramps, guides for the blind people, braille boardsm,...

All users who need it can access the subway with her guide dog.

In the subway there are more than 10,000 reserved seats and users who need them because of their disabilities will be given preference of use.