The Dnipro Metro is a small system that has a single line, which is 7.1 kilometers long. The system has a lot of conenctions with other means of public transportation, such as tramways and trolleybus lines. The Dnipro Metro´s business hours are between 5:30 a.m. and 11:00 at night during the entire week. The price of a single regular ticket to board the train is of 4 hryvnias (0.15 USD). There is no direct connection with the Dnipro International Airport, but there is a bus line that departs from the Vokzalna station.

The city of Dnipro, which was known as Dnipropetrovsk until 2016, is located on the southeast of Ukraine, on the edge of the Dnieper River. In terms of population, Dnipro has a little over one million inhabitants, making it the fourth most populated city on the country. This is one of the most important cities on the country since it has a strong weapon industry, as well as having factories where heavy machinery is manufactured.

Important political figures of Ukraine were born in this city, which was founded on 1787, when Empress Catherine the Great decided to inaugurate it. Since then, Dnipro has witnessed the country´s history, including events such as being occupied by Nazis on 1941, and the fall of Soviet communism on the 90s.

However, one of the last construction projects that the extinct URSS had was the construction of the Dnipro Metro.

Previous research for the project took place on 1979. This research had the purpose of preparing a public transportation system by the time that the city had over 1 million inhabitants. This was the condition of the Soviet Regime to give the necessary funds for a project of this kind.

The construction officially began on February 20th, 1981, and the metro was originally scheduled to be inaugurated on 1991. However, with the fall of the URSS on that year, the opening took place on 1995 instead. The system was built by the Soviet Union, but it was opened after its fall. 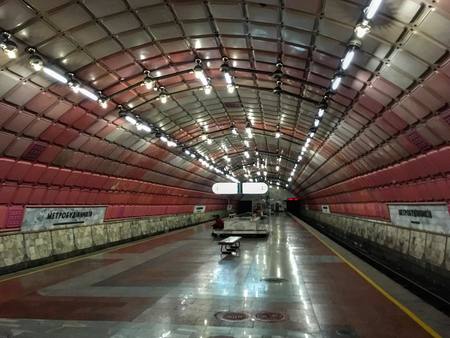 The Dnipro Metro is quite small. It is comprised of a single operational line, with a length of just 7.1 kilometers. On this route, there are six stations built. They are located from the Vokzalna stop, which is close to the city´s train station on the east, to Pokrovska, located on the western part of the city.

Since the Dnipro Metro is a small system, it is operational from 5:30 a.m. to 11:00 at night. This the same schedule from Monday to Sunday, that is, all week long.

The service tends to be available uninterruptedly, unless the system undergoes maintenance, which is rare. Due to its small size, the complete journey from end to end lasts only between 12 and 15 minutes.

The train frequency could vary slightly during peak hours on weekdays. During peak hours, the trains reach the platforms with a frequency of 7 minutes. During off-peak hours, as well as during weekends, the users will have to wait an average of 20 minutes per train. 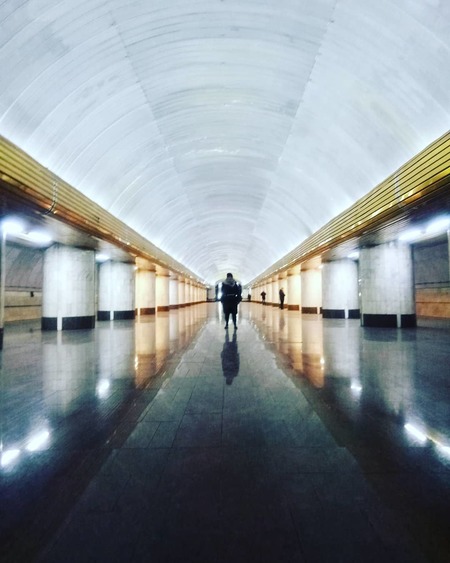 The Dnipro Metro fare system is quite simple, which could partly due to the fact that this is a small metro network. The price of a ride on the trains is of 4 hryvnias (0.15 USD), which must be paid via a neon green token that can be acquired on the station´s ticket booths.

However, there is another way to pay for a ride on the metro for passengers that frequently use the Dnipro public transportation. This alternative consists of monthly passes, which allow you to have unlimited rides on all the tramway, trolleybus, and metro lines of the city. These come in two versions:

Although small, the Dnipro Metro network is connected with a lot of means of public transportation, such as tramways and trolleybus lines. Below, the connections available at each station will be shown:

The Dnipro Metro does not have a station that disembarks at the Dnipro International Airport. However, there is a way to go to the airport via a bus line that departs from Vokzalna station. 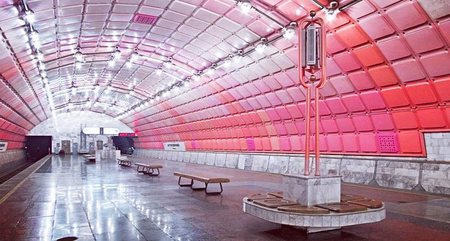 Once you reach said stop, you will have to exit the underground stations and wait on the closest bus stop for the bus number 109 from the Stari Kodaky line. After one of the buses arrives, board the vehicle and stay there until you reach the Aeroport stop. Between the Metro station and the airport there are 39 stations.

The journey lasts a little more than an hour since it is not an express line. It is a line that stops at many neighborhoods on the city. The price is of 7 Hryvnias (0.25 USD), and you could pay it with your Civil Pass or Student Pass if you wish.

Although it is a cheaper option, there are some limitations that will apply regarding your luggage. Both subways and buses have restrictions regarding the number of suitcases that you can bring with you. Therefore, if you can´t board the buses nor trains due to the luggage restriction, you can use the taxi lines or the rent-a-car services outside the airport.

Currently, there are three new stations under construction that will expand the network from Vokzalna station, which is very close to Dnipro´s Railway Central station, to the downtown area.

The first station would be Teatralna, located close the Performing Arts and Ballet Theater. The other two stations will be Tsentralna and Muzeina, both of which will be close to the History Museum.

As a fun fact, the construction was halted on the year 2009 due to lack of budget, and was later resumed on 2011. Some argue that the budget cut was caused by the fact that the city was not chosen to host the UEFA Europe League on the year 2012.

Later, on 2014, President Petro Poroshenko signed an agreement to give the needed funds to complete the construction and add six additional stations, adding up a total of 9 stations. According to the data available back then, the project would be finished by the year 2021, adding 11.8 kilometers of railway to the current network.

If you travel to Dnipro, you cannot miss Taras Shevchenko Park, which is located to the west of the city. It is a stunning space where you will find many rides and other ways to entertain yourself.

The place is comprised of two sections. On the first section, you will find the Student´s Old Palace, located on the roundabout of the place. Meanwhile, on the second section, you will be able to access a beautiful zoo.

You could also swim on the river that crosses the park during summer. You cannot do this during the rest of the year since it would be too cold to do it. Then, to finish your tour, you could go to the Shevchenko Monument, where the sunsets are so beautiful that they deserve to be on the best post stamps of the city.

To reach this place, you will have to exit Pokrovska Station and take a bus from line 141. The journey will last around 50 minutes. You will have to disembark on the Stari Shliakh St. stop.

Another emblematic place on the city is Dnipro´s Dmytro Yavornytsky National Museum of History. Opened on 1848, this is the oldest museum of the city, where 283 thousand items that come from the Paleolithic era to World War II lie.

This place stores relics from most of Dnipro´s history, with a special section dedicated to Cossacks antiques. To reach it, travelers should disembark on Vokzalna station, walk 100 meters towards the Dmytra Yavornytskoho Avenue tramway station, board a vehicle from line 101A, and, finally, disembark on the Istorychnyi Muzei stop. In front of that station, you will find the museum.