Daegu Metro is the underground rapid transit system connecting different corners of Deague, the third largest metropolitan area in South Korea. It is currently a three line network comprised of two metro lines and one monorail line. Daegu Metro connects 89 stations and has a track length of total 81.2 km. Daegu Metropolitan Transit Corporation is in charge of operating these lines.

Daegu is the fourth largest city in South Korea and its economic and industrial hub. Since the 80s, the city experienced rapid economic progress and with the onset of the current century, it became the center of multiple international events. Though it has a well-developed railroad transportation system, it was not being possible to manage the traffic of 2.5 million people.

As a consequence, the city authority started construction of the first line in 1992. It was planned to build a 6-line network subsequently in three phases. On 26 November 1997, the first line started operation with 29 stations and 25 km long track. It was then extended another 0.7 km towards the south-western part of the country in 2002.

Construction of the second line started in 1997. Since 2005, it is operational connecting 26 stations over a 28 km long track. In 2012, it was extended another 3.4 km towards the east. Hitachi Ltd. started the construction of the monorail line in 2008. It has around 24 km long line connecting 30 stations.

The metro system operates from 05:30 AM in the morning till midnight. The average frequency of trains is 12 minutes with slight variation depending on the line. On busy hours, trains run at every 4 to 5 minutes interval. 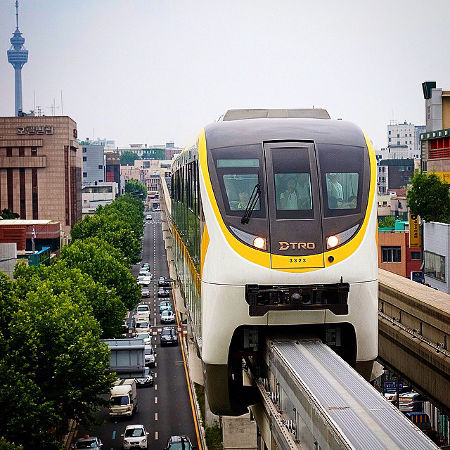 The three lines intersect each other at different stations. Line 1 and Line 2 intersect at Banwoldang station at the heart of downtown Daegu.

The line extends from Daegok in the south to Ansim in the east. It lies completely within the border of the Daegu metropolitan area, though, in future, there can be an extension to Gyeongsan city. To travel through the complete line, it takes around 50 minutes. From this line, it is possible to make a transfer to Korail and KTX lines.

This line extends from Munyang to Yeungnam University and connects the east-west corners of the city. A complete travel on this line takes around an hour. Main stations on this line are:

Also called Sky Rail, this is Korea’s first bidirectional urban monorail system. The monorail is run by a driverless system. Starting from the KNU Medical center in the north the line runs through the center of the city and ends at Yongii in the south. A complete travel on this line takes around 50 minutes.

Main stations connected by this line are:

An automated Gateway Transit Line is planned to be operational as a part of Deagu Metro system in near future.

The fare of Daegu Metro is based on ticket type and age of the rider. It doesn’t discriminate depending on the distance traveled. There are two types of tickets, namely, RF Card and Tokens.

The tickets can be purchased either from ticket vending machines or from customer centers. Some ticket machines called complementary ticket machines, are reserved for KB Pass Card, BC Card holders. The tickets need to be punched at the entry and exit points of stations.

The details of tickets and fares are available on corporation’s Fare & Ticket page.

To offer everyone a pleasant and comfortable ride, Daegu Metropolitan Transit Corporation has made the following provisions:

There are certain rules that need to be followed for better management of the metro system and also for the safety of the passengers.

To make the best use of Daegu Metro service, keep in mind:

Map via www.dtro.or.kr
See map full resolution. It may take a little bit to load.