Pyongyang Metro is the subway rapid transit network serving North Korea’s Capital Pyongyang. It is one of the primary transport facilities of the city. It operates through 2 lines over a 22.5 km long track. 16 stations are currently connected by this line and all of them are underground. The ridership is estimated in the range of 300,000 to 700,000 per day. Transport and Communication Commission of North Korea is in charge of operating this metro system.

This metro system is almost a replica of Moscow Metro. In the past foreign tourists were allowed only to travel between Yŏnggwang and Puhŭng stations. Currently, most of the stations are open to them.

Managing daily commuters was always a concern for Pyongyang government. There were only a few private automobiles in the city and bikes were banned. This made the modes of public transport crowded and irregular.

Construction of Pyongyang Metro started in 1965 importing rolling stocks from Germany and other electrical equipment from China. China claims that it has also sent experts to help in the construction process, though, North Korea doesn’t admit that. 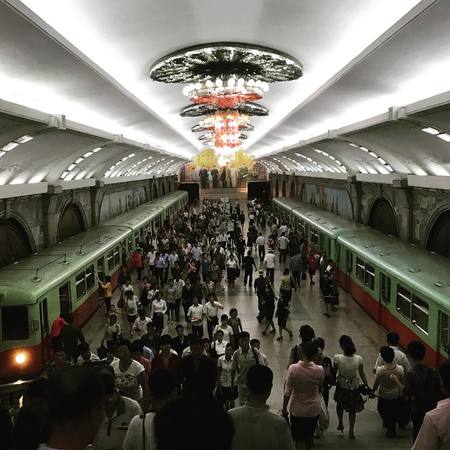 The whole process was conducted under the supervision of President Kim Il-Sung. Korean People’s Army manually constructed the system. Between 1973 and 1978, all the 14 stations were opened in a phase wise manner. The remaining two, namely, Yonggwang and Puhoong, were constructed in 1987.

Subway trains run every 5 to 7 minutes. On rush hours, trains come every 2 minutes. The usual hours of operation are from 05:30 AM to 23:30 PM. However, it is reported that the entire system remains closed on first Monday of every month and also on other occasions.

Pyongyang Metro currently has two lines: Chollima Line and Hyoksin Line. The lines run just under city’s main streets. The depots are all at ground level.

What makes the stations unique is their naming after popular characters and themes of North Korea’s revolutionary war. The stations are located pretty distant from each other, 1500 m on average. They are decorated with statues of war heroes, murals, marbles, light fixtures and paintings.

The stations are so built that they can serve as bomb shelters during war time. It is also speculated that military bases are connected to these stations via secret lines.

This line is operating since 1973 and is connecting the north-south corners of the city. Starting from Puhŭng station in the south it runs through 6 stations along the Taedong River and ends at Pulgŭnbyŏl station in the north.

This line started full operation from 1978. It connects Kwangbok station in the southwest corner of the city to Ragwŏn station in the northeast. There are 9 stations on the route, though, at Kwangmyŏng station, trains don’t stop.

Additional sections are going to be added to the two operational lines in near future. The Chollima Line will have Sŏp'o and Ryŏnmot stations further in the north and Ch'ŏngch'un and Mangyongdae stations in the south. On Hyoksin Line after Kwangbok, two additional stations, namely, Yŏngung and Ch'ilgok will be added.

There is also a long-term plan for another north-south line that will cross Taedong River on a bridge. The three lines will then meet at the heart of city creating a triangle pattern. 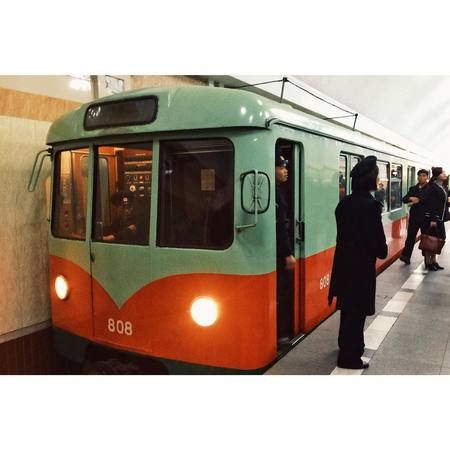 Traveling through Pyongyang Metro is a very cheap affair. Each ticket costs 5 won which is equal to around UD$ 0.03.

Previously there were aluminum tokens to be used as tickets. The logo of the metro system was mounted on it. Now, the metro authority has introduced paper tickets with Korean 지 printed on it. The tickets need to be scanned at the entry points before allowing passengers access to the main station area.

On the stations and also on the trains, passengers must follow certain rules and etiquettes to ensure a pleasant travel experience for everybody.

Following tips can be helpful if you are using the metro for the first time: