The Manchester Metrolink has a length of 100 kilometers of railroad, 7 lines, and 6 functional routes.

The Metro´s working hours are between 6:00 am and midnight (12:00 am) all week long. During peak hours, the train frequency is between 5 and 8 minutes.

A one-trip single ticket for only one zone costs 1.20 pounds (GBP.)

The Manchester Metro has a direct connection to the airport through route number 6 (Manchester Airport-Victoria).

Manchester is the second most populated city of the United Kingdom of Great Britain, being home to almost 3.300.000 inhabitants in its metropolitan area.

Since the end of World War II, Manchester has become an important financial, artistic, cultural, and educational center for Europe, and an important place thanks to its press. In fact, many British entrepreneurs have considered this city as the best place to start a business in the country, being a better place than London itself.

Likewise, the economic growth experienced by the metropolis in the last decade has created a strong increment of the number of firms of the service sector in the city, diversifying significantly the number of jobs available in the city.

Tourism also deserves an honorable mention, since nowadays Manchester has become second most visited place by foreigners that visit the United Kingdom.

All of these factors forced the local authorities to present proposals of a new massive transportation service, with the goal of covering the increasing demand of the citizens. This is a consequence of the increase of the Manchester population.

At the beginning of the 80s, the possibility of using the old tramway railroads –which were functional during the 19th century- was being considered. These railroads were considered to be used as roads for a new light rail service, with the added benefit that these old railroads could become functional once again.

Currently, this transportation system has a 100 kilometer-long route, 7 lines, and 6 operational routes.

The Manchester Metro has 7 operational lines, which are also used by 6 light rail commercial routes. These 7 lines have trains that travel through 100 kilometers of railroads, and they have a total number of 93 stations. 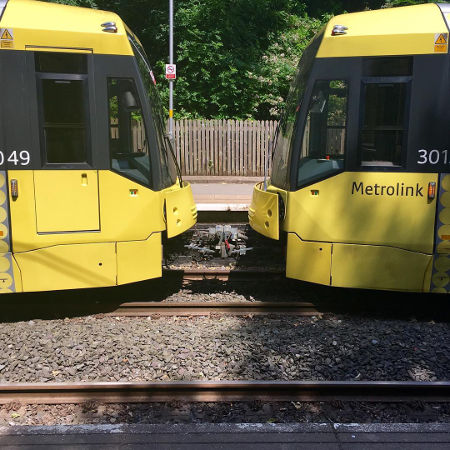 The routes are connected to the four cardinal directions, and all of the routes meet at the center. During 2017, over 44 million passengers rode the metro. As impressive as this number is, the number of yearly passengers of the metro keeps increasing.

The lines and routes of the Manchester Metrolink will be described below:

The Airport Line goes through downtown Manchester, as well as many other zones of Great Manchester. This line is 14.5 kilometers long, and offers service to 15 stations.

Its name comes from the fact this line connects downtown Manchester with the airport, as well as going through the regions of Castlefield, Firswood, Chorlton-cum-Hardy, Northern Moor, Wythenshawe, Baguley, Ringway, among others.

It started operations on November 3rd, 2014. This is the most recent line.

On the original blueprints of the metro there was a planned expansion towards the South Manchester University Hospital and the Newall Green suburb. However, this expansion was discarded in the end.

On this line, the route 6 trains transit, which is the route between the Manchester Airport and Victoria.

It was finished by June 15th, 1992, when it was opened for business. Most of the railroads of this line are used by railway lines recovered from the 19th century. The owners decided to use old trains from these railway lines since they didn´t have newer trains when they made this line, which was one of the first lines to be planned.

On this line, you will find routes 1 (Altrincham-Bury), and 2 (Altrincham–Piccadilly).

The Bury Line is comprised of the route that goes between downtown Manchester and the Bury area, which is in Great Manchester.

During its first months, this line was united to the Altrincham Line. However, on April 6th, 1992, the people in charge of the project decided to separate both lines, making the Bury Line an official line.

The trains of this line transit by the regions of Bury, Radcliffe, Besses o' th' Barn, Prestwich, Prestwich and Cheetham Hill. 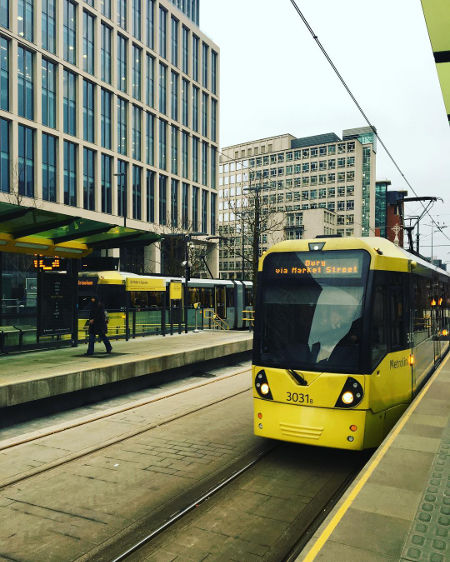 This line is comprised of 10 stations, all of which are located within a 15.9 kilometer-long route. It was almost entirely built on top of railroad restored from the now-defunct Manchester tramway. On this railroad, the trains transit by routes 1 (Altrincham-Bury) and 4 (Bury-Piccadilly.)

The East Manchester Line covers the eastern region of Manchester and great Manchester since its route goes through the areas of Ashton-under-Lyne, Droylsden and Audenshaw.

This route is 10 kilometers long, and it has 13 stations, which are spread throughout the regions of Ashton-under-Lyne, Audenshaw, Droylsden and Clayton.

It started operations on February 11th, 2013. However, there are still works being done to this line, since there are plans to expand its route towards the town of Stalybridge.

On this line, the trains from route number 3 transit (Eccles–Ashton-under-Lyne).

The South Manchester Line unites downtown Manchester with the town of Didsbury, which is located to the south of Great Manchester.

This route is 7.1 kilometers long, in which 8 stations lie. These stations are spread throughout the towns of Didsbury, Withington and Chorlton-cum-Hardy.

The trains from route number 5 (East Didsbury–Rochdale Town Centre) transit on this line.

The Eccles Line light rail line connects downtown Manchester with the region of Eccles through Salford Quays. This route has a length of 6.4 kilometers, in which there are 11 stations available through the regions of Eccles, Ladywell, Weaste, Langworthy and Salford Quays.

The construction works on this line began on 1997, when two firms agreed to do this project. It is important to point out that this project was being discussed since 1980, since the region of Salford Quays was experiencing a considerable increase in population and didn’t have any efficient public transportation system. Finally, the line was inaugurated on July 21st, 2011.

On this line transit the trains of route number 3 (Eccles–Ashton-under-Lyne).

This line connects downtown Manchester with the northern region of Great Manchester through a 22.5 kilometer-long route and 20 stations. This makes it the longest line of the Manchester Metro.

Its trains transit through a railroad that dates back to the 19th century, which was later restored to become part of the Manchester Metrolink. This way, during the year 2012, this light rail line was officially inaugurated. The trains from route 5 (East Didsbury–Rochdale Town Centre) transit in here. 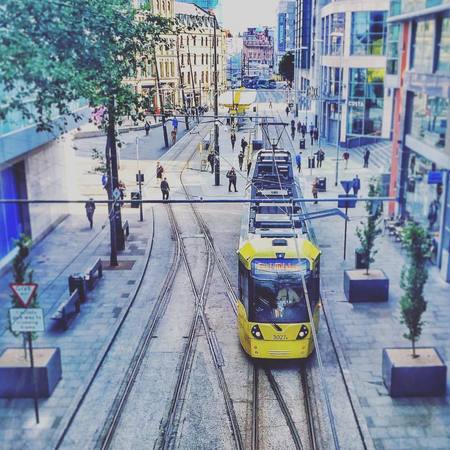 The Manchester Metro allows you to transfer to other systems of transportation, such as buses or fast trams.

We will see below detailed information about the system’s stations that connect directly to other transportation services so that you can move throughout the city: 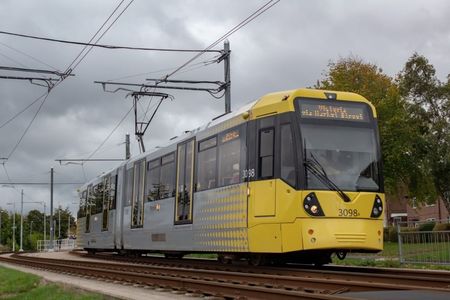 The Manchester Metro starts operations at 6:00 am, and it operates continuously until midnight (12:00 am). It repeats these same working hours throughout the 7 days of the week. This schedule is specially done for the benefit of the city’s workers, since the metro closes very early if there are leisure events celebrated in the city.

Trains tend to reach the stations with a frequency between 12 and 20 minutes, depending of the time of day. During peak hours, the waiting time ranges between 5 and 8 minutes.

The prices and types of tickets are the following:

Metrolink Single Ticket: This ticket gives you a single ride, which allows you to go towards one station. However, you can disembark at a station and board the train again as long as you do it within two hours, which is the time when your ticket expires. 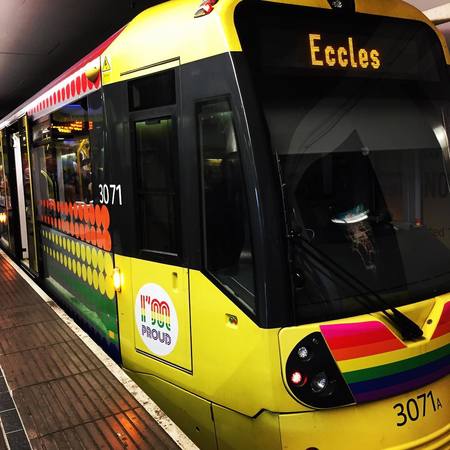 Metrolink Return Off-Peak Ticket: This option allows you to make a round trip within two stations, as long as you begin your journey after 9:30 am.

Metrolink Return Peak-Time Ticket: With this ticket you can make a round trip between two stations at any time of the day. It’s only valid from Monday to Friday.

Metrolink Off-Peak All Day TravelCard: You can only use this service if you have this card, which is called the TravelCard. Its price is of 5.40 pounds sterling (GBP.) This card allows you to travel all day long in the light rail trains of the Metrolink, with the only condition that you need to start your journey after 9:30 am.

Metrolink Anytime All Day TravelCard: This offer is only valid through this card, which is refillable. Its price is of 7.60 GBP. It allows you to travel on the system’s trains as many times as you want for a whole day.

Metrolink Weekend Travelcard: You only get access to this offer through this card. Its price is of 6.20 GBP. It allows you to travel on the light rail trains beginning at 6:00 pm on Fridays, and ending at night on Sunday. 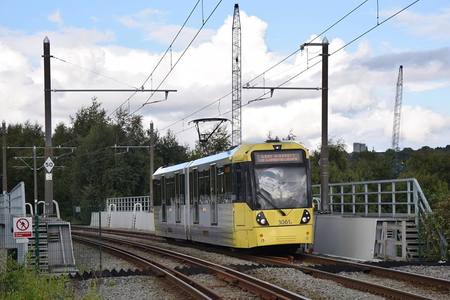 Metrolink 7-Day Season Ticket: With this pass, you can travel on the Manchester Metro for as many times as you want within a 7 day period.

Metrolink 28-Day Season Ticket: This pass allows you to travel on the system’s trains without any limit for 28 days straight.

Metrolink Annual Season Ticket: With this pass, you can travel for as many times as you want on the system’s trains for a whole year.

Children and young people between five and 16 years of age are entitled to a 50% discount on their journey’s fares.

Note: Prices may vary depending on the total distance that you may travel on the light rail trains of the Manchester Metro. 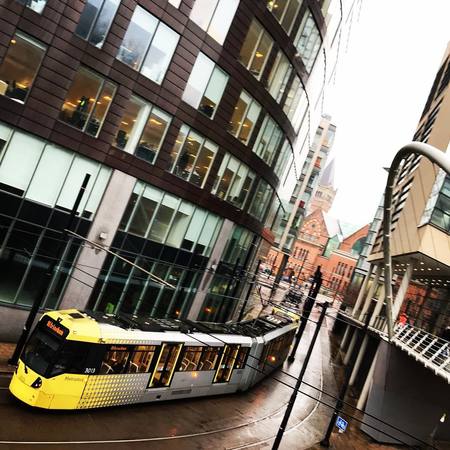 The Manchester Metro has a direct route that is in charge of transporting the passengers from downtown Manchester to the Manchester Airport.

This route is route number 6 (Manchester Airport–Victoria), in which the trains from the Airport Line transit. This line was specifically designed with this purpose in mind. The working hours for the trains that drive on this line are longer than usual, since these trains offer service from Monday to Thursday beginning at 3:45 am, and they stop operating at 11:10 pm. During weekends, that is, on Fridays, Saturdays, and Sundays, the trains work from 3:45 am to 12:10 am.

The vehicles from route 6 reach directly to the airport, so you don’t have to worry about boarding an additional means of transportation.

Nevertheless, if you prefer it, outside of the facilities you will find taxi lines, buses, rent-a-car firms, and suburban rail services, in case that your destination is not within the center of the metropolis. In any case, there are plenty of alternatives to fit the different needs of different users.

Manchester’s cultural heritage can be clearly seen on its streets, which mixes the modern culture of the 21st century and Manchester’s industrial history of the 19th and the 20th century.

One of the most iconic buildings in the city is the Manchester Cathedral, which is located a few blocks from the Exchange Square station. This station is served by the trains of route number 5. This church dates back from 1421, but it has received considerable modifications throughout its history. Some of its most notable changes were made during the Victorian era. Its architecture has a gothic style.

Thousands of tourists visit this cathedral each year. They are attracted to this place not only for religious purposes, which is the reason that this church exists in the first place, but also because of the beautiful design of its façade. Since it is located right at the center of downtown Manchester, it is recommended that you take the time to visit this cathedral and get to know it. While you visit it, also try to get to know the history of the surrounding place. Map via www.metrolink.co.uk
See map full resolution. It may take a little bit to load.