The Rotterdam Metro is the most important transportation system in Rotterdam, a city located in the Netherlands.

The system began to provide service, following its founding in 1968. It was the Netherlands’ first metro and during the time, its 5.9 kilometers (3.7 miles) made it the world’s smallest metro.

There is a total of five lines and 62 stations.

The system extends beyond Rotterdam’s city limits and is operated by the public company, Rotterdamse Elektrische Tram (RET).

Metros of the Netherlands: Rotterdam

Rotterdam is the Kingdom of the Netherlands’s second largest and most populated city. The capital city of Amsterdam is the only one to surpass it. Its population includes over 600 thousand residents.

Thanks to the Rotterdam Port, the city is recognized both across Europe and around the world. The port is the largest in the continent and the third busiest in the world. However, despite port activity being the undeniable livelihood of Rotterdam, the city has additionally grown into a tourist attraction. Founded in 1270, near the outskirts of the Rotte River, the city has an abundance of historic sites, marked by its unique architecture.

Rotterdam is also the European waterway between the Rhine, Meuse and Scheldt Rivers which extend to the Ruhr. Therefore, it is also known as Europe’s Gateway.

The rolling stock has varied considerably throughout the metro’s history, due to its founding in 1968. German Canadian Bombardier trains currently make up the trains’ five operating lines. The company manufactured every train series. The oldest is the 5300 from the year 1998. It contained just one cabin. It was followed by the 5400 series in 2001.

The annual ridership is over 93 million.

The system operator is Rotterdamse Elektrische Tram (RET), a public company that regulates all the city’s public transportation.

Rotterdam is one of the most important cities in the Netherlands. New transportation solutions were needed due to its business dynamics. The number of bus and tram lines grew exponentially following the Second World War. Each one was constructed and operated by the Rotterdamse Elektrische Tram (RET).

Leading up to this was the planning and construction of what would become the Rotterdam Metro. The first phase produced the world’s smallest metro: At just 5.9 kilometers (3.7 miles), this was the North-South line. The route ran between Rotterdam Centraal station and Zuidplein on the Maas riverbank.

Construction lasted seven years and cost over 77 million euros, which was 170 million Dutch guilders at the time. Each citizen was permitted one free trip to become familiar with the system. It was inaugurated on February 9, 1968 by Princess Beatriz, Prince Claudio and the mayor of Rotterdam, Wim Thomassen.

The Rotterdam Metro has expanded rapidly since its opening. The first expansion was done just two years later, when the length was doubled to reach Zalmplaat. The lines grew and the naming system was changed. Known as the East-West line, the second line opened in 1982 and traveled between Capelsebrug and Coolhaven stations. The lines became the Erasmus Line and the Caland Line in the 90s, when they were renamed using the last names of famous Rotterdam celebrities. In December 2009, the system’s five lines were again reorganized and labeled A through E.

The Rotterdam Metro is a vast transportation system with five operating lines. The underground section is 17.5 kilometers (10.9 miles). The remaining 8.5 kilometers (5.3 miles) are surface level and therefore, considered a light rail. The lines are detailed below:

This was the first line to open. It was primarily named the North-South line but was later changed to the Erasmus Line. The line is 17.2 kilometers (10.7 miles), making it the system’s smallest line. There are 20 stations, which will be extended to 24 and reach Vlaardingen West. Its distinguishing color is green. The terminal stations are Binnenhof and Schiedam Centrum.

This was the second line to be founded. It was first named the East-West line, and later changed to the Caland Line. It extends 20.1 kilometers (12.5 miles) and has 23 stations. The terminal stations are Nesselande and Schiedam Centrum. The line color is yellow. A 2018 extension was planned along with one for 2020 that will increase the number of stations to 32.

Identified, by the color red, this is the system’s longest line at 30 kilometers (18.6 miles). The terminals stations are De Terp and De Akkers. Line C’s 26 stations also make it the system’s line with the most stations.

Created after the 2009 reorganization, this is the system’s fourth line. Its color is light blue and there are 17 stations extending 21 kilometers (13 miles). The route runs from Rotterdam Centraal station to De Akkers station. This line has the fewest stations.

This is the most recently constructed line, following the 2009 reorganization. It can be identified on system maps by the color, dark blue. There are 23 stations, extending 27 kilometers (16.8 miles), making it the system’s second longest line. The terminal stations are Den Haag Centraal and Slinge.

Rotterdam is one of the largest cities in the Netherlands and consequently has various modes of transportation. In addition to the metro, the vast and historical tram system is most significant.

They have been operating in the system since 1879, when they were animal-powered and continually operating throughout the change to electric power in 1905. There are nine tram lines which altogether include 322 stations. There are three special lines as well. The tram is the most used transportation system, following the metro and there are multiple connections between the tram and the subway.

In addition to the tram, buses offer Rotterdam a great solution to its transportation issues. There are 55 lines, that travel over 432.7 kilometers (268.9 miles) to various parts of the city. This translates into a more direct transportation method for Rotterdam’s residents which typically complements the metro and tram.

There are “water buses”, as well, which mainly consists of the ferries and their seven operating lines. In a system that extends to Dordrecht, there is a place for bicycles as well. Bikes are an immensely important mode of transportation for the Dutch.

Rotterdam The Hague Airport is the air terminal that serves the Dutch city of Rotterdam as well as The Hague. It is located 5 kilometers (3.1 miles) northwest of the city and following the Eindhoven Airport, it is the third busiest airport in the Netherlands. In 2014, it surpassed a million and a half passengers annually. Flights are mainly national and European.

Since there is no direct metro connection, a bus must be taken to reach the airport. This bus line is 33. It provides a direct connection to Rotterdam Centraal station, found on metro lines D and E. It also connects to Meijersplein station on line E. 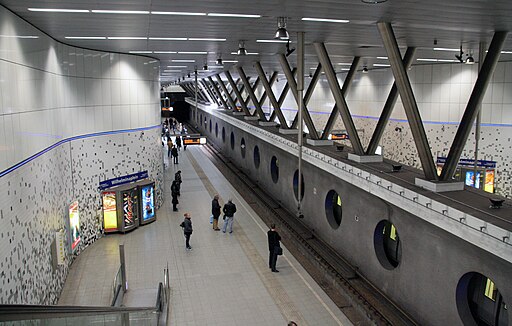 Each of Rotterdam Metro’s operating lines has a different schedule. The operating schedule varies by line, but the overall schedule is from 5:45 a.m. to 12:30 a.m.

Line A’s first train departs from Kralingse Zoom station at 5:42 a.m. The frequency begins around every ten minutes, continuing throughout the day until about 7:25 p.m., when it changes to every 15 minutes. It increases to every 20 minutes, after midnight. The last train reaches Alexander station at 12:41 a.m.

Line C’s first train begins operating from De Terp station at 5:48 a.m. Like the preceding lines, the frequency runs every 15 minutes in the beginning but quickly changes to every 10 minutes. It returns to every 15 minutes from 6:45 p.m. until closing. The last train reaches Kralingse Zoom station at 12:26 a.m.

Line D begins service at 5:47 a.m., with the first train departing from Rotterdam Centraal station. Frequency begins every 15 minutes, but quickly changes to every 10 minutes. At approximately 7:15 a.m., the frequency changes to every five minutes. The frequency then alternates over the course of the trip, sometimes changing to every seven minutes, while at other times, it decreases to just a couple of minutes. At 9:30 a.m., it returns to every 10 minutes. The frequency decreases to about 4 or 5 minutes, beginning at 3:15 p.m. It returns to every ten minutes beginning at 6:15 p.m. The frequency is every 15 minutes from 7:00 p.m. until closing. The last train reaches Slinge station at 1:04 a.m.

There are a variety of fares and cards to serve the needs of anyone using mass transportation. Rotterdam Metro has time-based tickets that keep the frequent rider in mind. The simplest is valid for two hours and includes a round trip for 3.50 euros ($US 3.97). An all day-trip ticket can be purchased for 8 euros ($US 9.06), while the reduced fare is 4.50 euros ($US 5.10).

The Rotterdam fare system is also based on card usage. All riders may purchase an unregistered OV-chipkaart card or a personalized one that can only be used by the bearer. The basic fare on either one is 0.90 euros ($US 1.02). The reduced fare is 0.59 euros ($US 0.67) Each additional kilometer outside of Rotterdam’s metropolitan area is 0.139 euros ($US 0.157) while the reduced price is 0.092 euros ($US 0.104).

Lastly, tourists have a great option when taking the Rotterdam metro. They may purchase a Tourist Ticket Day card for 13.50 euros ($US 15.30), that can be used all day on almost any mode of transportation in the Netherland’s South Holland province.

Like any of the world’s transportation systems, the RET operated Rotterdam Metro has established a series of regulations to ensure harmony among its riders. Some are listed below:

The Rotterdam Metro began as the world’s smallest metro. This has changed considerably, however, as it promises to be ever evolving. Lines A and B will be expanded in the coming years, with a variety of projects to be completed by 2020. However, the system awaits a brand-new reorganization since RET has taken over the Schiedam-Hoek van Holland railroad services and integrated them with the metro. This restructuring will cause the terminal stations on lines A and B to be changed.

Like any transportation system, it is necessary to keep certain tips in mind to ensure the most comfortable and effortless trip possible. Some tips for the Rotterdam Metro are included below:

Sightseeing via the Rotterdam Metro

Rotterdam is the port, the sea, the river, mobilization, business and transportation. This city has always been viewed as the financial face of the Netherlands, but its multiple attractions have caused it to increasingly be considered a tourist attraction. The Rotterdam Metro has transformed into an excellent mode of transportation for both locals and the tourists that wish to explore the city. Included below are some of the sites that can be reached via the Rotterdam Metro: Map via en.wikipedia.org
See map full resolution. It may take a little bit to load.