The Kaohsiung Rapid Transit is the metro system that gives service to the city of Kaohsiung in Taiwan. It has three commercial lines: two mass transportation lines, and a light rail line.

The entire journey is 47.3 kilometers long. The system currently offers service to 45 stations.

The metro´s working hours are between 6:00 a.m. and 24:00 p.m. During peak hours, the train frequency is between four and six minutes.

The fare is calculated based on the number of kilometers travelled. The minimum fare is of 20.00 Taiwanese dollars (0.65 USD.)

With almost three million inhabitants in its metropolitan area, Kaohsiung is the third most important city in Taiwan, since this city is ranked third in both number of inhabitants and economic power in the entire country.

Unlike Taipei, which is the capital of the city, this metropolis has wide streets and avenues, which contrast a lot with the narrow roads of the former.

After the second half of the 20th century, this city experienced a significant industrial development. This was mainly caused by its seaport, which currently ranks as the port of highest relevance of this Asian country.

Its strategic geographical location has allowed the city to get the highest success possible in the commerce sector in Taiwan, which allowed it to uninterruptedly accelerate its economic growth. This situation helped the development of new alternatives of mass transportation, which will generate even more wealth for the city.

This way, the municipal government encouraged the creation and organization of public transportation at surface-level with the creation of new bus lines, light railways, fast tram systems, and the construction of the Kaohsiung Metro.

The latter one was a project that was planned after an initial research that was done back in 1987 to confirm the viability of a system of this magnitude. After being green lit by the specialist of this subject, the local administration began to press the central government to help them finance the project.

However, after many futile discussions about how to cover the costs of the metro system, it wasn´t until the year 2001 when the construction works finally began. The project was planned to be finished by 2006, but, due to an accident that happened on 2004 in which a tunnel of the network fell apart, the project´s execution had been halted. 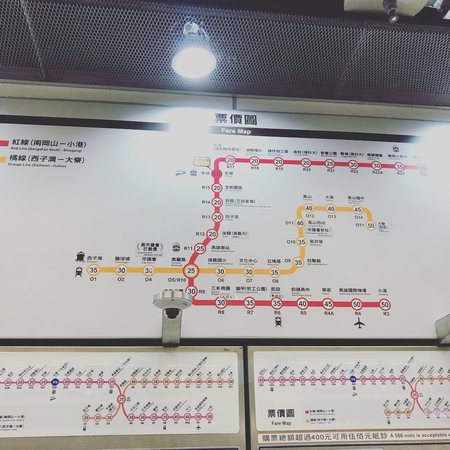 The opening of the Kaohsiung Rapid Transit, as it is locally known, had to be put off until 2008. Its three commercial lines opened with 37 operational stations. The number of stations has been increasing since then.

The Kaohsiung Rapid Transit lines will be shown below:

The Red Line begins its journey at the Siaogang district, right at the intersection between the streets of Yanhai and Hanmin, which are located at the south of the city. From there, the trains depart towards the north through Jhongshan Road, crossing through the Kaohsiung International Airport, Central Park, and the Sanduo commercial area.

During its journey, the line also serves the Banpingshan neighborhood, the Nanzih Export Processing Zone industrial area, and some sectors that used to belong to the region of Kaohsiung.

Finally, this line is spread throughout the Gaonan road, from which it crosses to the Qiaotou district, and reaches the southern end of the Gangshan district. The total length of the Red Line is of approximately 28.3 kilometers. The number of stations that belong to this line is 24, 15 of which are located underground, 8 of which are elevated, while the remaining one is at surface-level.

It officially started to operate, (that is, that they opened the metro for business) on March 9th, 2008. Up until now, its last expansion took place on December 23rd, 2012.

The Orange Line corresponds to the route between the east and the west of the city. Its journey begins at the Sizihwan district at the western part of the city, from where it goes to Dayong Road to cross over the Love River to reach the Jhongjheng Road route.

There, the trains continue their journey transiting near the Kaohsiung City Hall, on the city´s Cultural Center, the Martial Arts Stadium, as well as the Weiwuying Park.

The rolling stock ends its journey going through Zihyou Road, Guangyuan Road, and Jhongshan East Road. These roads are important since the offer access to the districts of Fengshan and Daliao.

The Orange Line opened its doors to the public on September 14th, 2008, exactly on Mid-fall Festival Day. Its railway length is of 14.4 kilometers, spread throughout 14 stations.

A little before its opening, fixes were needed at the last minute, such as including illumination on the billboards at the emergency exits, fixing the screens of the ticket vending machines -since they had low sharpness, so they were hard to read-, and fixing some issues with the entrance doors at certain stations.

Even though its inauguration was scheduled to take place at the same time as the Red Line´s inauguration, the dates were changed after one of the tunnels fell apart during mid-construction, causing the delay of the opening dates. 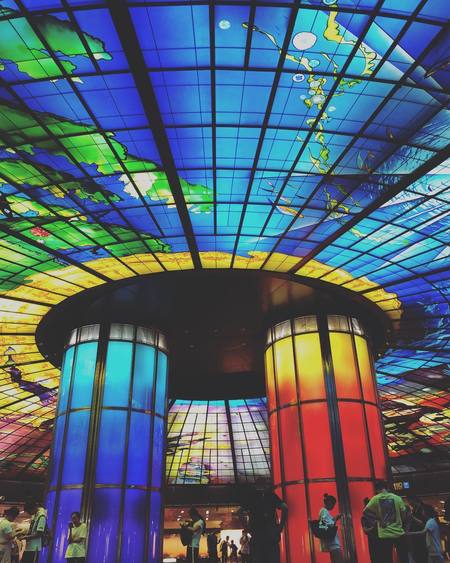 The light rail line of the Kaohsiung Metro currently has a length of 22.1 kilometers, but it is currently under construction. It currently has 14 stations, but the plan is to finish a total of 38 stations for the line. According to the forecast of the people in charge of the project, the line´s total cost will be of 16,500 million Taiwanese dollars, which is slightly over 535,000,000 USD.

On this first phase, the line goes from the C1 station to the C14 stop. During the journey, the C3 and C14 stations offer transfers to the other two lines. Its construction began on June 4th, 2013, and technical tests were done to it on August, 2015 (time in which free rides on the system were offered.)

The official opening of the light rail had to be done on the year 2017, when, during the month of September, the first phase of the construction was completed. The rest of the line, which was known as Phase II, will begin construction beginning on 2019, since other works will have to be done beforehand at predetermined areas in which the rolling stock will transit.

Most of the Kaohsiung Metro´s stations have some type of connection with other complementary means of transportation, such as suburban train stations or bus lines.

Below, some of the transfer stations of the Kaohsiung Rapid Transit will be shown: 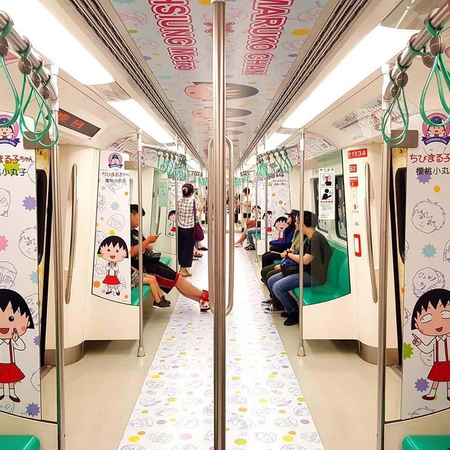 The Kaohsiung Metro is open during hours that are quite convenient for the users that visit the system frequently. Its stations begin to offer service starting at 6:00 a.m., but the passengers can enter the platforms a few minutes earlier so that they can board the first train that is ready to depart. The vehicles transit the stops uninterruptedly until 12:00 a.m. Even though the last train tends to depart at that time at the terminal stations, the facilities may remain open until 1:00 a.m.

During peak hours, the units arrive with a frequency between four and six minutes at the platforms. During off-peak hours, the waiting times increase to 8 minutes in average and, after 11:00 p.m., travelers could wait for 20 minutes for the next train. 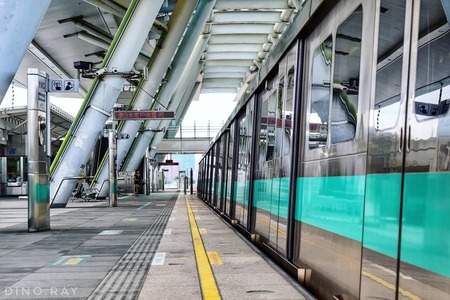 The price of the journeys on the Kaohsiung Metro are based on the number of kilometers travelled by the passengers, starting from a minimum fare of 20.00 Taiwanese dollars (0.65 USD,) and reaching a maximum amount of 60.00 TWD (1.95 USD.)

There are many payment options. You can pay the exact amount of your journey through a simple ticket, or you could obtain one of the four reloadable cards that work on the metro´s facilities.

Below, we will see the different payment ways for the system:

The passengers also have reloadable cards available, offered by iPASS Corporation, EasyCard Corporation, iCash Corporation and Yuan Hsin Digital Payment Co. Ltd. Each one of them offer different benefits to the users, offering a lot of choices regarding transportation services for the Kaohsiung Rapid Transit. 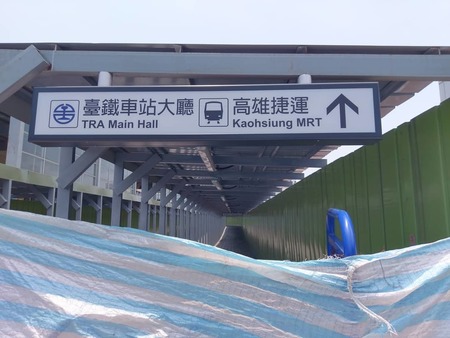 The Kaohsiung Metro has a direct connection with the Kaohsiung International Airport, which makes it easier for the users to have access to it.

The Kaohsiung International Airport Station is specifically located at the north of the airport. From this place it is possible to board the Airport Express Line A and Airport Express Line B bus lines, which will take you close to the airport´s terminals. You can use this option if you don´t want to walk, since there is a metro stop that is within walking distance. Therefore, you can reach the airport without needing another means of transportation other than the metro.

The price of your ticket depends of the platform from which you board the train, since the fare system from the Kaohsiung Rapid Transit is based on the number of kilometers travelled by the passenger.

The service is available starting from 6:00 a.m., and ending at 12:00 a.m., and you can make a transfer towards other means of transportation during your journey on the subway.

However, outside of the airport you will find many alternatives to go towards Kaohsiung or nearby areas, including bus lines, taxis, and rent-a-car services. Consider the size of your luggage before choosing a service. You will not be able to travel on the metro´s wagons nor on the buses if your luggage exceeds certain weight, so you would need to choose another option in that case.

Currently, there are many expansion projects to increase the size of the Kaohsiung Metro. For instance, to the south of the Zuoying station, which belongs to the Red Line, lies an underground tunnel under construction that will connect the Linyuan area. On this extension, five additional stations will be built. Additionally, there are plans to penetrate the neighborhoods of Hunei, Lujhu, Sinyuan and Donggang, completing a total of 43 stations in only the Red Line.

The Orange Line also has active network expansion projects. The construction of 18 additional stops for the current system is planned, which would cover the neighborhoods of Daliao, Linyuan, Fongshan and Pingtung to the underground network of the metro. These works will add 28 kilometers of railway, adding up to a total of 43 kilometers.

The expansion works for the Circular light rail line are already being executed, which will cover the neighborhoods of Gushan, Zuoying, Sanmin, Lingya and Cianjhen, adding 24 stations to the network. This project, alongside the others, will make the metro system as one of the most important means of transportation in Kaohsiung. 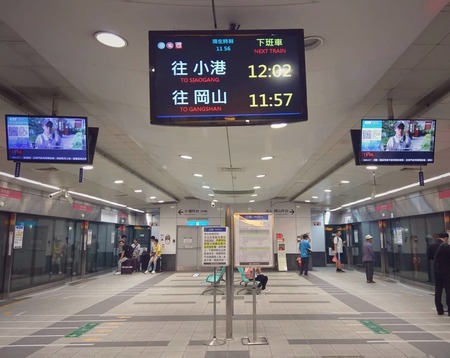 The city of Kaohsiung offers many places of touristic interest to the visitors that want to explore its streets. At Love Pier Station from the light rail line, you will be able to see the beauty of Love River Park, a park that is found across the Love River, which has a special place in the culture of the local inhabitants. It is the ideal place to escape from the bustling urban environment from the rest of the city, where you will be able to peacefully read, have a picnic with friends, or simple sightsee the river´s views.

Additionally, just a few streets from the Yanchengpu Station of the Orange Line, you will find the Pier-2 Art Center. This space is dedicated to urban art, which exhibits the graffiti works of professionals within this niche, while also being a place where many fairs are presented for the general public. The authorities regularly organize cultural events that are an opportunity for people of different ages to gather, where young people and senior citizens share their view on art. In short, it is a must-visit place in Kaohsiung. Map via www.krtco.com.tw
See map full resolution. It may take a little bit to load.