The Almaty Metro has just one line that provides service to 9 stations and covers 11 km (6.8 miles). It runs on a continuous and precise schedule from 6:20 a. m to 11:30 pm. The frequency varies between 8 and 15 minutes, depending on the time of day. Payment methods include tokens or prepaid cards. A single trip costs about 80 KZT (0.24 USD). There is no direct metro connection to the airport, but it is accessible via the bus routes.

Almaty is currently the most populated city in Kazakhstan. Though it does not serve as the capital, it includes a population of 1,700,000 people, equal to almost 9% of the country’s total population.

Throughout most of the twentieth century, from 1929 to 1997, Almaty was the Kazakh state capital of the Soviet Union. Upon the fall of the USSR, the new government administration decided to move the Kazakhstan capital to Astana, despite the fact that Almaty was the cultural and economic center of the country, as it stands today.

Beginning in the 80s, Almaty has sat squarely as the territory’s most significant metropolis. Community leaders realized the need for the construction of a massive transportation system that would be capable of meeting the current and future transportation needs of its residents.

Therefore, it was during the 90s, that officials began the search for interested investors to fulfill construction of the Almaty Metro. However, it proved a trying decade for Kazakhstan, filled with uncertainties about what could occur in a post-Soviet Union. This generated major delays in the execution of the subway. Residents would have to wait for a new millennium, in 2003, to see metro construction.

System construction began on February 10, during the same year. The project took a total of 11 years to complete. There is 1 line with 9 commercial stations and a route that runs 11 kilometers (6.8 miles) from Furmanov, a major city street, to Auezov neighborhood. 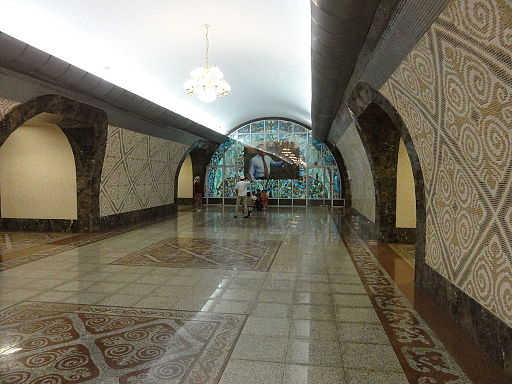 There is also a plan for second route, with 10 stations, that would complement the first line. It’s identifying color would be green while red will continue to distinguish the first one.

The following are the Almaty Metro stations.

Raiymbek batyr (Райымбек батыра): This stop opened on December 1, 2011 and can be found between Furmanov Street and Raiymbek Avenue. The construction of this stop was meant to join the city’s present with its history.

Zhibek Zholy (Жибек Жолы): This stop is located below Panfilov Street between Zhibek Zholy and Gogol Streets. The name was inspired by the ancient silk route that crossed the country. The architectural and artistic design of the interior is based on the traditional decorative art methods of the Kazakh town. The walls are covered in beige marble and decorated with elements of artificial rock. The station opened on December 1, 2011.

Almaly (Алмалы): This station is situated below Furmanov Street, between Bogenbai Batyr and Kabanbay Batry streets. The walls are covered in marble mosaics that represent the country’s nationalism. Lighting is placed in the stainless-steel moldings near the ceiling, with small light bulbs that cast an orderly appearance on the space. The station was inaugurated on December 1, 2011.

Abay (Абая): This stop is situated at the intersection of Abay Avenue and Furmanov Street, named accordingly after the first street. The station, itself, is a work of art, with Florentine mosaics at the end of its platforms, marble-decorated walls, brown granite floors and bronze reliefs representing the area’s history. The opening was December 1, 2011.

Baikonur (Байконур): This station is located below Abay Avenue, between Masanchi and Baitursynov Streets. The terminal design is based on the high-tech style, associated with the Baikonur Cosmodrome. The walls are covered in blue and light gray colored metal and a giant 16 panel LED screen has been integrated at the end of the platforms. The station opened on December 1, 2011.

Auezov Theater (Театр имени Мухтара Ауэзова): The Auezov Theater stop is located below Abay Avenue, at the intersection of Zhandosova Street. The walls and columns are adorned with medallions and ornaments to symbolize national pride. At the end of the platform is a beautiful mosaic. The opening date was December 1, 2011.

Alatau (Алатау): This station is located south of Abay Avenue, between Gagarin Avenue and Zharokov Street. The purpose of this station’s design is to represent the old customs of Kazakhstan. The walls are decorated in white and green marble. The floors are gray granite with a simple graphic design done in light brown granite. Roman style themed mosaics are found at the end of the platforms. It opened December 1, 2011.

Sayran (Сайран): Sayron stop is below Abay Avenue, between Brusilovski and Tlendiev Streets. The station takes its name from the Sayran Reservoir, located just 1 kilometer away. Opened on April 18, 2015, this is one of Almaty Metro’s newest stations.

Moskva (Москва): Found below Abay Avenue, this stop is in the Auezov neighborhood, between Utegen Batyr and Altynsarin streets. To strengthen good relations with Russia, construction management reached out to the embassy, offering to pay tribute, by naming this station, Moskva (Moscow). The condition was that the Russian capital, likewise, adopt the name Almaty for some of its stations. The station opened April 18, 2015.

The Almaty Metro has a continuous schedule that runs from 6:20 a. m. to 11:30 p. m., though there is a precise time in which each station receives its first train arrival.

The subway system has seven trains to meet passenger demand. There is a 10-minute frequency on weekdays and to avoid congestion during peak hours, the frequency is shortened to every 8 minutes. Weekend frequency is every 15 minutes. The LED screens located in the boarding areas always display the time between train arrivals.

The trains travel at a speed of 40 km/h (24.8 mi/h), making the first trip from the train station to Raiymbek batyr terminal in 16 minutes.

The first train arrival at each station runs on the following schedule.

Raiymbek batyr (Райымбек батыра): The first train, traveling in the direction of Moskva, arrives at 6:24 a. m.

Zhibek Zholy (Жибек Жолы): The first train, traveling in the direction of Raiymbek batyr, reaches this station at 6:49 a. m. Traveling in the opposite direction, towards Moskva, it arrives at 6:27 a. m.

Almaly (Алмалы): The first train, traveling towards Raiymbek batyr, reaches this station at 6:46 a.m. Traveling in the direction of Moskva, the first train arrives at 6:29 a.m.

Sayran (Сайран): The first train, heading towards Raiymbek batyr, arrives at 6:32 a. m. Traveling in the direction of Moskva, it arrives at 6:33 a. m.

Moskva (Москва): The first train, traveling in the direction of Raiymbek batyr, reaches this station is 6:30 a. m. 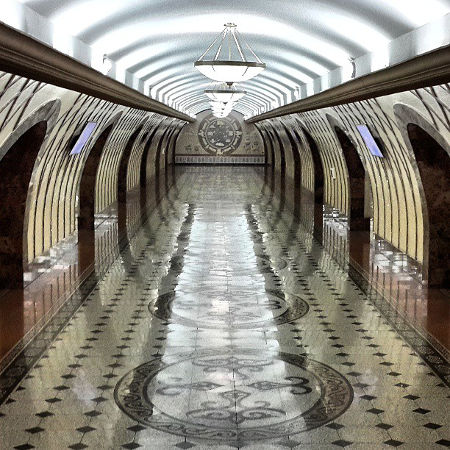 The payment methods available to Almaty Metro passengers include prepaid cards, and disposable or reusable tokens. Both prepaid cards and tokens can be purchased at any of the station’s smart fare machines.

In addition to being MasterCard security certified, the card is guaranteed to work well in turnstiles. They can be reloaded up to 60 trips and once expired, one must contact a metro system operator to be issued a new one.

Reusable tickets can be utilized all day, simply by reloading them on smart fare machines.

Fares for children between the ages of 7 and 15 are 40 KZT (0.12 USD). The cards and corresponding tickets are red. Minors must supply a copy of their certified birth certificate or a student ID. Without the proper documentation, they must pay the general fee. This is without exception. Children, younger than 7, travel for free.

Line 1 is currently being expanded to the west with four commercial stations that will extend 8.64 kilometers (5.37 miles). The first two are planned between 2018 and 2019 and the last two are expected to open between 2020 and 2021.

Line 1 will be extended north as well, adding six new stations to the system. It will cover 8.76 kilometers (5.44 miles) and be the one surface level track on this route. Work is expected to begin in 2022 and to be completed by 2025.

Also, among city administration projects is the construction of a second line, that will include the following 10 stations: Duman, Central Park, Dostyk, Zheltoksan, Baitursynuly, Auezova, Tau 2, Zhandosova, Kablukova, and Orbit. It is expected that work will begin between 2024 and 2026 and be completed by 2035.

A third route is also planned with the expectation that design will begin in 2025 and that construction will be complete by 2030.

Within the same vision is the idea for a circular line but the exact start dates are unknown. Design could begin in 2035, followed by construction. However, this will not take place before the first three lines are complete.

There is no direct connection from the Almaty Metro to the Almaty International Airport. More specifically, there is no station stop directly at the air terminal. However, there are various bus routes that provide service to the airport, such as lines 86, 106, 79 and 92. The routes depart from Sayakhat bus terminal in the middle of city center, a few meters from Almaty station.

From the north, near Raiymbek batyr station, one can take the subway for the standard ticket price of 80 KZT ($US 0.24) and board the train in the direction of Moskva. The Saykhat bus stop is located two subway stops away, on the surface level above the metro. One can take bus 86, 106, 79 or 92 for a fee of 70 KZT ($US 0.21). The ride from the city center to the airport takes about 40 minutes, providing the opportunity to enjoy the scenery of the city and the bordering landscapes.

One must leave the airport terminal to travel in the opposite direction towards the Almaty city center. A bus station can be found 400 meters (about 5 minutes) away from the main entrance. Buses 86, 106, 79 and 92 travel directly to the city center, to Almaty Metro station. One should be aware that this is the route to Almaty 1, since there is also an Almaty 2 bus terminal, outside the city.

Still, taxis are available from the airport, in addition to vehicle rental companies, guaranteeing a speedy, comfortable trip. The extremely economical exchange value for a taxi is something additional to consider. 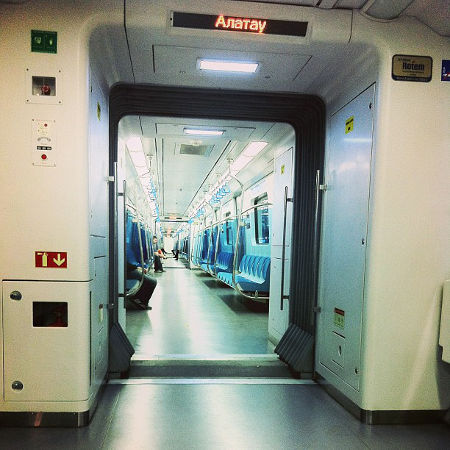 The Almaty Metro details a considerable number of infractions, yet, they are understandable, in view of it being the architectural jewel of the city. The following outlines the standard rules of use and proper behavior within the system.

The beautiful Ascension Cathedral is located right in the city center, near Zhibek Zholy station. The church emits a captivating grandeur with its magnificent altar, filled with the images of saints. The cathedral has become a treasure in the middle of the metropolis, thanks to the impressive classic architecture on its exterior and the gardens that surround the area. Even without being religious, this is a building, worthy of appreciation, for its structure alone.

Equally close, near Abay station, is Kazakhstan’s National Academy of Sciences. The academy is home to scientific and academic events throughout the year and the fountain right outside invites one to thoughtfully reflect upon the noble building. Spending the afternoon at this precious site, reading a book or having coffee, while observing daily Kadazh life is an experience to be played out in these scholarly surroundings.