The Tbilisi Metro has two operative lines that cover a total of 26.4 km. It serves a total of 23 stations. It is open from 6 a.m. to midnight every day of the week, without exception. The frequency of the trains varies from 2 minutes (during rush hours) to 5 or 6 minutes when the demand is lower. The basic cost for one ticket is 50 tetri per journey (about $0.19 USD). Tickets are good for 90 minutes after their initial validation. For those who use the metro regularly, a Metromoney Card is a good option.

The city of Tbilisi, also known as Tiflis, is the capital city of Georgia. It is it’s largest and most populated urban area as well: about 1.12 million people live within its administrative area (246 sq. km).

The first settlements were constructed in the early 5th century, and the city has experienced many growth and decline periods throughout its long history. One of the most important ones occurred just recently, while Georgia was part of the Soviet Union. While under soviet rule, Tbilisi experienced a large industrial expansion, and was considered the 4th most important city in the union.

During the second half of the 20th century, the city resumed its long-held status as a bridge city, becoming a commercial hub and strategic connection point between eastern Europe and Asia. As a result, the city prospered and accumulated wealth, driving the population up with it. As this capital grew, the governing authorities decided to anticipate the public transport problems that come with a larger population. Many different strategies were laid out, and studies were conducted to select the best solution.

As was almost logical for a city of its size, the many architects and engineers that worked on the studies concluded that the best solution would be a metro system. Thus, construction began in 1952, and the metro was opened to the public several years later.

The newly built metro was inaugurated on January 11th, 1966. It only had 5 stations at the time. From then, it has been slowly expanding, adding new stations to the system every now and then. Today, this metro system has a total of 26.4 km, with 23 stations. Expansion projects are proposed and considered frequently, so this system will keep on growing. 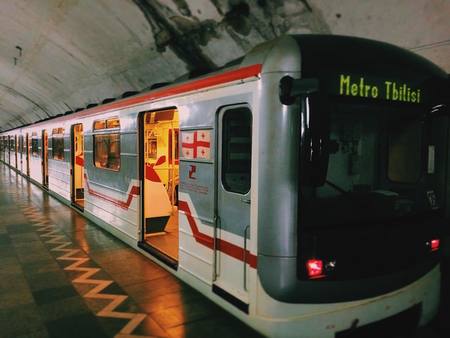 The Tbilisi metro system has two lines and 23 stations distributed along its 26.4 km of track. It carries about 600,000 people every day throughout the city, an impressive feat considering the network is this small.

This line, known as the Akhmeteli–Varketili Line, was the first line to be conceived. It was in the late 1940’s that the government realized the need for a robust transport system that could alleviate traffic and congestion on the surface, especially in the future as the city grew. Consequently, its construction began in the next few years, after the project was accepted.

To this day, this first line has a total of 19.6 km of subterranean track. It runs from the Gldani district in the northern side of the city to the Samgori district, to the south. There are plans to expand the line further, but nothing is set in stone yet. The stations that comprise this line are:

This line, also known as the Saburtalo Line, was inaugurated in 1979. It was designed to provide service to the western part of the city, from the Didube district an up to the Saburtalo area. It has a track length of 6.8 km, and currently serves 7 stations along the way. They are: 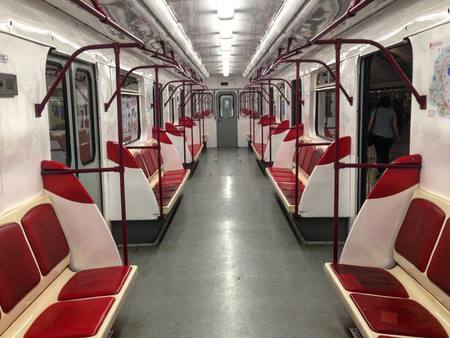 As it is a relatively small metro system, it is not possible to reach all places in the Georgian capital through the metro. However, users can easily find bus stops that connect to most places in the city outside of the Tbilisi metro stations. Some of the most important are:

The metro of Tbilisi is open throughout most of the day in order to reach as much people as possible. Passengers may use the metro from 6:00 a.m. to midnight. This schedule is the same for all days of the week, including Sundays.

What does vary is the frequency of the trains. During busy hours, passengers must wait an average of 2.5 minutes between each train. Outside of this scope, the frequency lowers and the trains pass every 5 or 6 minutes. This lapse increases towards the later hours of the night, as the estimated time between trains reaches up to 12 minutes before closing.

Passengers have two main ways to pay for their use of the metro: through traditional tickets that are common around the world or with an electronic card (the latter of which is preferred).

Tickets may be purchased at any ticket booth in any station for 50 tetri (cents for the Georgian Lira) for a one-way ticket. It is possible to use this ticket for the next 90 minutes after its initial validation, and it can also be used within the local bus system.

The MetroMoney card is the prepaid card that allows its users access to several public transport networks around the Georgian capital, without the need to buy tickets for each one. Users enjoy access to the metro and bus systems, and it can also be used in the cableway of Tbilisi.

As expected from this kind of prepaid cards, the MetroMoney has additional benefits and special discounts. Any user can buy the card in commercial areas found inside the metro stations, and within the Rike-Narikala cableway stations. Users must pay a fee of ₾2.00 (2 Georgian Lari, equivalent to about $0.78 USD). It is not personalized, so any user can lend it to friends or family (as long as it has credit, of course). It is quite easy to acquire and use.

The MetroMoney card needs to be reloaded with credits once it runs out. This can be done through vending machines or through the ticket offices in any metro or cableway station. Additionally, it can also be recharged through the Bank of Georgia and many other commercial establishments.

In case the user wishes to see how much credit is left in the card, the amount remaining is displayed in the tourniquets at the metro stations, at the validation point in the buses or at the ticket offices at the cableway.

The MetroMoney card can be returned within the first 30 days of use, to a full reimbursement of the ₾2.00 fee. However, the original ticket of purchase must be presented with it to be valid.

If the card has any flaws or damage (that come from the factory, not the normal wear from use or any other damage caused directly or indirectly by the passenger), users can get a free replacement through Customer Services in Avlabari and Medical University stations. However, if the card is deemed to have been damaged by the user, it won’t be free and have a reposition cost of ₾2.00 (the cost of a new MetroMoney card).

If for any reason a MetroMoney card is lost, the metro authorities will block the card number in their network, so it can’t be utilized. After the affected user gets another card, the available balance will be transferred to the new card. 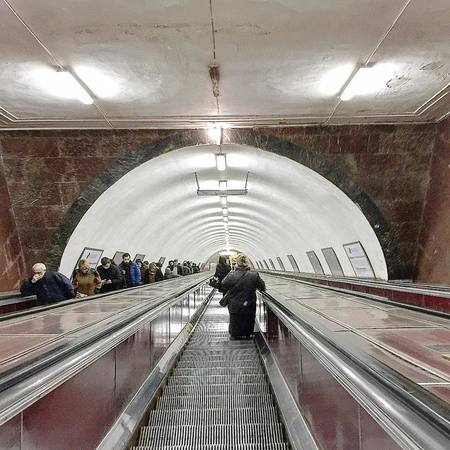 As with most metro systems in the world, the Tbilisi metro has an established set of rules and regulations that passengers must abide so that everyone using the network can have a good experience. They are also intended to provide a safe environment for all. Some of those rules are:

The Tbilisi metro has no direct connection with the International Airport of Tbilisi, located to the southeast, on the outskirts of the capital. To reach it, users can take a bus that heads directly to the terminal. Passengers riding the metro must head to Station Square (either 1 or 2). There is a bus stop just in front of the metro entrance. Users must then wait for bus line 37 that will take them to the airport. This bus line is run by the Tbilisi Transport Company, so the MetroMoney card is also valid there. It takes about 35 to 40 minutes to reach the airport, and the ride has a cost of 50 tetri (about $0.19 USD). The buses stop right in front of the main airport terminal, so users need only descend and walk into the building.

To reach the metro from the Tbilisi International Airport, the procedure is basically the same. Just outside the terminal buildings, passengers will find several taxi and bus stops, as well as the classic rental car depots. Users may opt to take a taxi for a faster ride to the city, but the bus line is also a good option. Passengers must only look for bus line 37 that heads to the center of the city and connects to the metro via Station Square.

The bus option is cheaper, of course. However, if there is a lot of baggage involved, it may be wiser to take a taxi instead, as it is more secure and there is less hassle with the bags, so it will result in a more comfortable experience.

The most important project involving the expansion of the metro is the construction of Line 3 of the Tbilisi metro (Rustaveli 2 – Vazisubani Line), originally designed and projected in the 80’s. If the original layout is followed, it would primarily serve the Vake district, adding 14 new stations to the underground network.

In fact, construction began on 5 of these stations in the year 2000, but they were never completed. The works have been frozen since then, but local authorities have expressed their intentions to recommence construction on this third line. It would probably connect to the existing metro system through Didube station, on Line 1. Regardless, the project is currently frozen, and there is no clear indication that it will be resumed any time soon.

In the meantime, local authorities have opted for the renovation of several of the original stations of the system. Many of them were already falling into a state of disrepair and needed an uplift as soon as possible. Thus, further extension of the Tbilisi metro seems unlikely in the near future.

Many of the visitors that head to Tbilisi seek it for its historical past, specially as a part of the fallen Soviet Union. The city keeps many historical attractions that prove a great sight for those who decide to visit this beautiful capital. Some of the most important sites are:

Simon Janashia Museum of Georgia: this attraction is reachable through Tavisuplebis Moedani station, of Line 1. This magnificent edification lays very close to the metro entrance. Within it, many of the country’s most important archeological findings are on display. The building itself has a long history, having had several different names throughout the 20th century, and it was even sacked during the Russian revolution of 1917. It also became a historical landmark for the symbolical fights for freedom.

Rustaveli Avenue: reached through the same station (Tavisuplebis Moedani station, of Line 1), this avenue is famous for the contrast it presents between past, present and future Tbilisi and Georgia itself. It was designed by the French architect Georges-Eugène Haussmann, who wanted the newest architectural projects in the city to diverge from the old city that lies just a few meters away. Along its 1.5 km length, visitors can find luxurious hotels and typical Georgian markets. It is a great place to start the visit to the city, and it is close to many other tourist attractions.