The Sofia Metro is the most important urban transportation system in the capital of Bulgaria. Inaugurated on January 28, 1998, this metro is a recent creation.

The metro is medium sized but growing. With two operating lines to its credit, it covers a distance of 40 kilometers (25 miles) Altogether, there are 35 stations that serve the most populated districts in the city and provide service to the airport.

The system is developing, with the recent inauguration of a second line and a third one under construction.

The cost per trip is 1.60 leva ($US 0.95). The operating schedule runs from 5:00 am to midnight, although the first and last trains frequently arrive before and after this time.

The Sofia Metro is one of the 30 largest metros in Europe and as a national site, it is publicly funded by various Bulgarian and European institutions.

Sofia is the capital of the Republic of Bulgaria and it is also the most significant city in the European country. The city has about 1,300,000 inhabitants, making it the fourteenth most populated city in the European Union. Located in Bulgaria’s far east, the geography is extremely varied due to the Balkan Mountains that pass through the city and its position facing Mount Vitosha, The Sofia Valley measures 1186 square kilometers (457.92 square miles), giving the city its large size.

Sofia is also largely known for its history. The city’s founding dates back to 7 century BC, with the settlement of a Thracian population. The city has been under the control of many civilizations and people including the Romans, Byzantines, Ottomans, and later the Soviets.

All this bestows the city with a great number of outstanding sites to visit. One of the most remarkable is the Alexander Nevsky Cathedral, one of the most important Orthodox Christian temples in the world. The Saint Sofia Church, the National Palace of Culture and the Boyana Church stand out as well. The National Museum of History showcases another very striking site. Visited by thousands of tourists, it serves as the historical documentation center.

The Sofia Metro is a mass transportation method, serving the Bulgarian capital. There is a proposed line under construction, and currently only 35 stations operate along 40 kilometers (24.9 miles) The metro’s two lines operate independently, though the routes mostly overlap.

Currently, there are three generations of rolling stock running on the Sofia Metro. The first was incorporated after the system’s inauguration in 1998. The Russian company Metrowagonmash constructed these 12 trains with a total of 48 cars. The company was also responsible for the second generation of trains that were integrated between 2005 and 2009. This second series, known as Rusich, included 40 trains and 120 cars.

The entire railway park will be renovated with 20 new Siemens Inspiro trains, which exemplify one of the German company’s most modern urban metro products. Three trains from this series have been operating since July 2018. 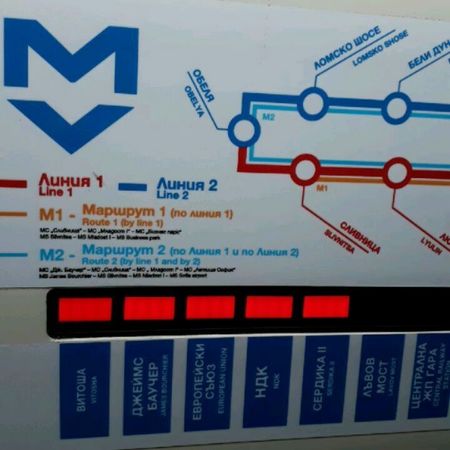 The system operator is Metropoliten JSC, a dependent of the municipal city government.

Like other global level transportation systems, Sofia begin to lay out one that was large-scale. As a result, the initial construction plans began in the 70s, despite there being a communist regime in Bulgaria at the time. The proposal was affirmed in 1972, when the Council of Ministers approved the metro’s technical and budgetary report. The system’s master plan was approved in 1974, leading to the planned construction of three lines totaling 52 kilometers (32.3 miles) and 47 stations. The first contractor was appointed in 1975.

Construction was a challenge due to valuable archeological items found underground. Many setbacks and problems arose and most of the work in the 90s was delayed. Ultimately, construction was first completed in the areas where most people would travel.

The Sofia Metro has two operating lines that share most of the same route but branch off at the ends to serve the various parts of the city. The system has both underground and surface stations. The lines and stations include:

There are 16 stations on Line 1. With the inauguration of the first section in 1998, this was the system’s first line. The terminal stations are Slivnitsa and Bussiness Park Sofia and its distinctive color is red. A connection can be made to Line 2 at Serdika station.

Unlike Line 1, this line was very recently constructed, with an opening in 2012. There are currently 32 stations. The terminal ones are Vitosha and the Sofia Airport branch. Blue is this line’s distinctive color.

Connections to other systems.

Sofia is a large metropolis with various transportation methods to meet most of its resident’s needs. There are four large transportation systems in this Bulgarian capital.

The buses have the most extensive network in the system, which can be attributed to the 98 different lines serving every corner of the city. Buses were Sofia’s main mode of transportation for many decades throughout the twentieth century. The system became modernized, however, following the collapse of the communist regime. There are a multitude of connections within the Sofia Metro. Some of the route’s terminal stops connect to the metro. Buses 44Б, 47, 48, 49 and 54 connect to Slivnitsa station. Additionally, buses 45 and 56 end at Vardar station.

Another of Sofia’s important transportation modes is the trolleybus. This system is considerably old with an inauguration that took place in 1941, during the Second World War. Although the system’s routes extend a total of 257 kilometers (160 miles), service is currently provided along 193 kilometers (120 miles). The trolleybuses are grouped along 9 distinct lines and the system is mainly concentrated in the residential areas.

Additionally, there are the trams. Inaugurated in 1901, they are a historical symbol of Sofia. The trams that circulate Sofia are modern though their transportation system has been rooted in the city for decades. The network is immense, extending 308 kilometers (191 miles). There is a total of 14 operating lines. Connections from the tram to the metro are common, with most lines connecting to at least one station. Line 1 connects to Knyaginya Maria Luiza station. Lines 3, 11 and 22 go through Konstantin Velichkov station. Line 6 connects to Beli Dunav station and Line 7 connects to Han Kubrat. Additionally, Line 8 passes through Vardar station. Line 10 connects to Vitosha and Line 20 connects to Opalchenska. 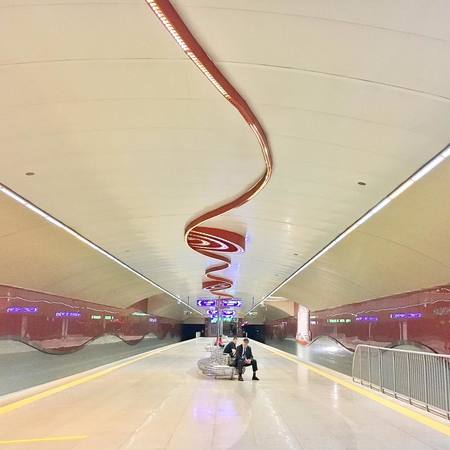 The long-distance transportation system also has a presence in Sofia. This is mainly concentrated at the Central Railway Station, which is the oldest in the country and is accessible by the metro’s Central Railway station on Line 2. This station likewise provides access to the Central Bus Station which is next to the railway.

The Sofia Airport is Sofia’s main air terminal. It, additionally, has the highest air traffic in the country. In 2017, the Sofia Airport surpassed 6 million passengers, breaking the national record. This was possible, following the construction of new terminals that modernized this old airport, founded in 1930.

The Sofia Airport has been an integral part of the Sofia Metro since 2015. This followed the inauguration of the Sofia Airport terminal station on Line 2. As a result, any person wishing to travel from the airport to the metro need only board at this station, which connects directly to the modern Terminal 2. There is a free bus shuttle, from 7:00 a.m. to 7:00 p.m., for passengers wishing to reach Terminal 1. 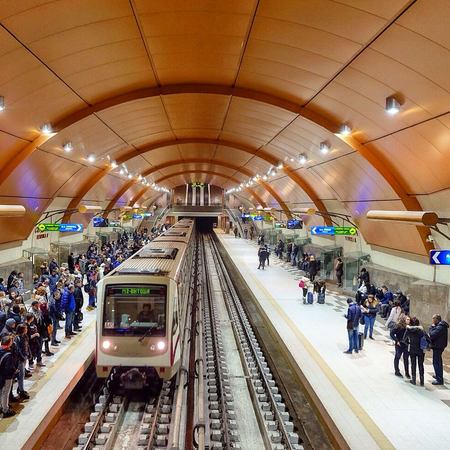 The Sofia Metro schedule runs from 5:00 a.m. until midnight. Opening and closing times vary, however, according to the line and station. Frequency generally varies according to the section traveled, whether its within one line or on one that involves two.

A single schedule is maintained by the section that runs between Slivnitsa and Mladost 1 stations, which operate as a pair and make up part of both lines. Line 2 has another main section, that runs between Vitosha and Slivnitsa stations. Lastly, there is a third schedule and frequency model that corresponds to the last section of each line: This is the section from Mladost 1 to Business Park on Line 1 and the section from Mladost 1 – Sofia Airport on Line 2. Sofia Metro manages the three frequency schedules below: 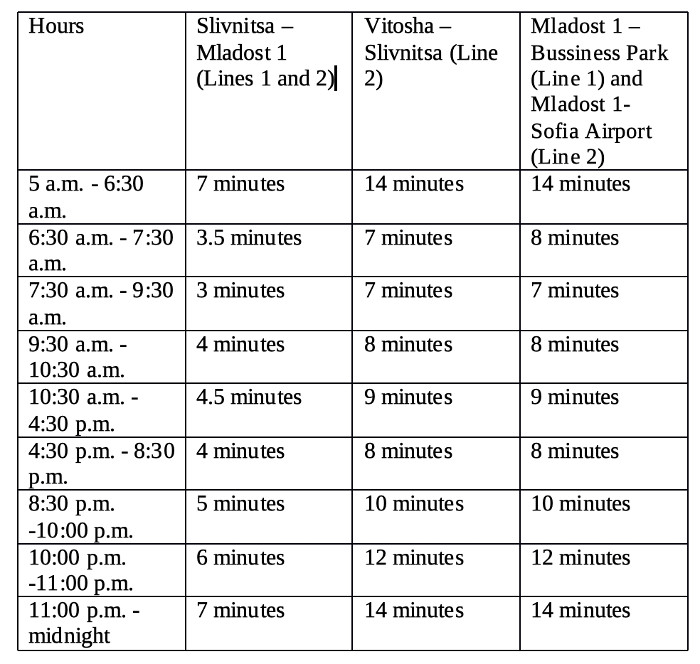 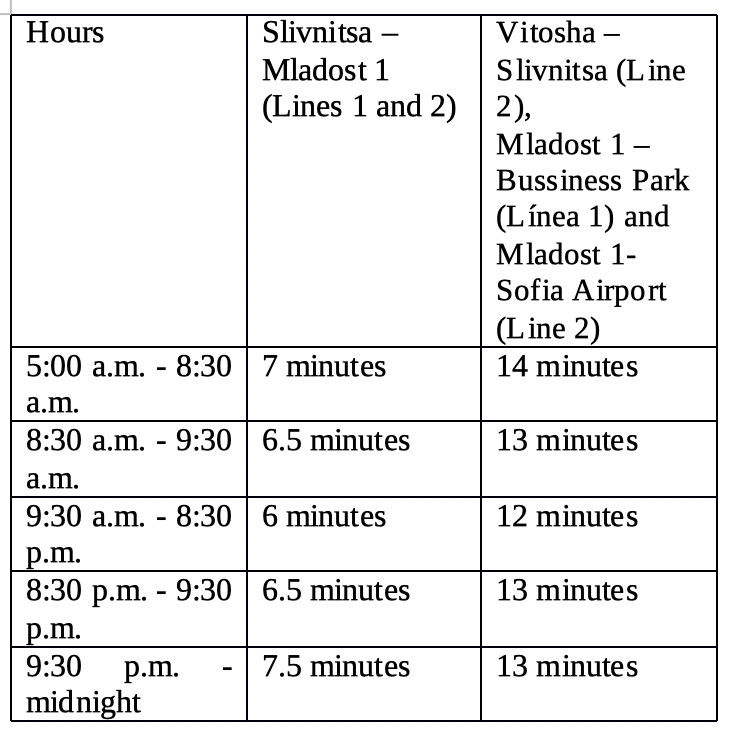 Sofia Metro fares vary, and are distinguished according to the riders’ needs, such as frequent or occasional usage. A basic ticket is good for 30 minutes. It can be used anywhere in the system and costs 1.60 leva ($US 0.95).

Another convenient option, especially for tourists, is the day card. The price is 4 leva ($US 2.37) and it can be used on any of Sofia’s public transportation. A 3-day option is also available for 10 leva ($US 5.91)

These cards may also be held for extended periods of time. There are 3-month, 6-month and yearly personalized and non-personalized ones. Regardless of card type, a valid ticket is required for use of the system to avoid the risk of a fine.

Like any global level transportation system, a set of rules govern and regulate the operations and daily dynamics of the Sofia Metro. Some are included below:

The youth of the Sofia Metro places it in the dynamic position of constant expansion, a growth that has continued since its opening. The most recent extension was on Line 2 in 2015. The municipal government mapped out a project to construct new system stations and lines in May 2018 as well. The plan was divided into four different stages, that would expand two existing lines while creating two new ones.

Line 3 is the first line under construction. It will have 22 stations in total and be constructed in two stages. The first stage will include the opening of 15 stations and the second will add an additional 7 on the eastern section. The terminal stations will be Gorna Banya and Vladimir Vazov

Extending the metro is a long-term project to be developed in several stages. Two new stations will be built in the expansion from Lyulin to Bojurishte. There are additional plans to expand Business Park Sofia to Simeonovo. Four more will be constructed, leaving from Vitosha, from Cherni Vrah to Studentski grad. This section will serve the Lozenets and Cuddendi zones. Seven stations will also be constructed on Line 3’s east side to reach the Military Academy.

Traveling in unfamiliar transportation systems may result in unpleasant experiences. Therefore, when exploring Sofia’s Metro, the following tips are recommended:

Sightseeing via the Sofia Metro

History. Civilizations. Culture. Fortune. Sofia is world renowned for its antique architectural construction. The structures represent the various communities that have occupied Eastern Europe. Additionally, with Bulgaria’s acceptance into the European Union and ever-increasing tourism, the city has been transformed into a modern European city. Some sites to see via metro include: Map via www.metropolitan.bg
See map full resolution. It may take a little bit to load.