Kuala Lumpur has a modern, complex, and very well interconnected transport system. The subway, known as KTM Komuter, was opened in 1995. It has 2 lines: Seremban and Port Klang, complemented by other 3 lines of light trains, and a monorail. The entire railroad system starts to work at 5:30am until midnight. Fare prices vary depending on the line to be taken, and can go from $0.19 USD to over $3.00 USD. There’s direct access to the airport by subway. Folding bicycles are allowed.

Among the most iconic countries of the Asian southeast, Malaysia stands out: its beaches are an authentic heaven on earth. For the last years, it has become one of the most visited tourist destinations worldwide. Kuala Lumpur, the Malaysian capital, is a modern, cosmopolitan city inhabited by over 7 million people within its 243,65 Km2 metropolitan area.

This city counts with an impressive cultural offer, where the vestiges of the old British Colonies merge with the local customs and currents of the 21st century. Due to Kuala Lumpur’s importance, since it represents the wealthiest region of the country, the city underwent a tremendous modernization in infrastructure during the 1990s and 2000s, which included new highways, hospitals, universities, as well as an excellent mass transportation system..

Quite right too. Seven million people living in the metropolis demanded to develop a public transport system up to standards. For that reason, in 1995 the country’s first subway system was opened, the KTM Komuter, consisting of two lines of wide proportions: on one side, the Seremban Line with an extension of 135 km; and on the other one, the 126 km long Port Klang Line. Both lines are managed by the railroad company Keretapi Tanah Melayu (KTM) -in English: The Malaysian Society of Railroads- owned by the Malaysian State. At the same time, this system is complemented by a monorail and light trains routes, which are operated by Rapid Rail, a company that belongs to a Belgium consortium.

From its beginnings it has had a great expansion, all of its serving lines put together have reached a total of 100,1 km, adding the 8,6 km of the monorail. In a little more than two decades, Kuala Lumpur has achieved to consolidate a subway system comparable with the best of the planet, an admirable fact for a country that still under development.

The Kuala Lumpur system consists of a main subway divided into two lines, a light train distributed into three branches and a monorail, all of which take care of transporting the people of the metropolis. Every route of the system connects the downtown with some of the regions that border the urban conglomerate and are extremely populated.

The main subway, known in the Malaysian capital as the KTM Komuter, consists of the Seremban and Port Klang lines, respectively identified as routes 1 and 2. Each one exceeds 120 km of tracks, and together they surpass a total of 261 km. 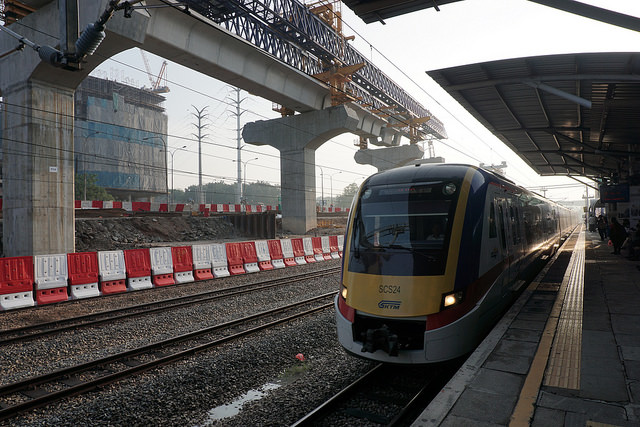 The Seremban route runs from Batu Caves –in the Gombak district- to Pulau Sebang in the Malacca region, connecting 26 stations all the way from north to south of the city. The terminal stations are Batu Caves Komuter and Tampin. Trains run at a speed up to 120km/h, passing through the downtown, where there are transfer stations that link to other lines.

The system’s second line, Port Klang, joins the Muallim district with the Selangor zone, also travelling through Kuala Lumpur’s downtown. It has 33 stations, with the Tanjung Malim terminal on the north end, and Port Klang terminal at the south, linking with the light train and bus lines services as well as with the Seremban line at different stops. The tow lines of the heavy subway are in charge of the Putra, Bank Negara, Kuala Lumpur and KL Sentral stations, making it possible to switch from one route to the other just by going down to the platform and wait for a train from the opposite line.

The light train system, which is also part of the city’s services, is composed of three different trajectories. The Ampang line is identified with routes number 3 and 4, Kelana Jaya is route 5, and Sungai Buloh-Kajang is route number 9. The first two lines operate under the name of Rapid KL, while the third one does so as MRT Rapid KL because the system is completely automated.

The Ampang line is notorious because it consists of two routes: number 3 named LRT Ampang, and number 4 called LRT Sri Petaling. Though their names are different, they belong to the same line. It runs 45km distributed in 36 stations. The two networks it provides service to depart from the Sentul Timur terminal, in Bandar Baru Sentul, to the Ampang (route 3) and Putra Heights (route 4) stops at the Ampang and Subang Jaya zones that correspond to each trajectory.

At the same time, the Kelana Jaya line (route 5) travels 46km along its 37 stations, connecting the Gombak district with Subang Jaya locality. It’s the system’s most modern line. The majority of the stations are elevated, though some also run underground. The trains operate with a no-driver system, traveling at 80km/h, and link with various bus lines. All the stations are suited for people with disabilities, complying with the major international standards regarding quality customer service.

Route 9, in charge of the Sungai Buloh-Kajang line, although it isn’t a light train as such, it can’t either be referred to as a subway. In any case, it’s a hybrid system responsible for the functioning of heavy trains. It runs 51km with 31 stations, from Sungai Buloh terminal in Sungai Buloh to Kajang station at Kajang. This line is administered by the Rapid Rail consortium, and not by the state-owned KTM.

The monorail, also working as Rapid KL, it’s the smallest system of all. It barely runs 8,8km with 11 commercial stations, connecting the Brickfields area, at KL Sentral Monorail Terminal, with the Pekeliling district at the Titiwangsa station. Nonetheless, despite of its dimension, the monorail transports more than 68,000 users per day.

Kuala Lumpur’s railroad system operates from 5:30 am until midnight. Afterwards, users must opt to use alternative means of transport, such as taxis. The system is entirely interconnected within itself, as is the case of the Seremban line (route 1) of the heavy train system, that has direct transfers to the Ampang line and its two branches at several stations.

Here’s a list of the stations that connect to other routes:

Maluri: is the only station of the route 3 that has a connection: and is to line 9.

Kuala Lumpur´s subway ticketing system is based on travel distance. Each line has its minimum and maximum rates. The KOMUTER LINK is a rechargeable card used for the heavy train service (routes 1 and 2). The light train and monorail work with the MyRapid SMART card. Though you can also pay in cash, the use of rechargeable cards is more convenient. This is a list of estimated fares per line:

The system has special cards for senior citizens and students, which allows them to obtain a discount between 50% and 40% -respectively- on rides. Children under 7 years old can ride for free.

Connecting to the Airport

First line is the KLIA Transit, identified with line 7, that runs 57 km from the terminal zone to the central station, making three stops on the way. Salak Tinggi ERL station is the first stop, at Selangor state, in the outsides of Kuala Lumpur’s metropolitan area. Next is the Putrajaya/Cyberjaya ERL station at the Putrajaya region, on the Malaysian capital’s border. The third stop is Bandar Tasik Selatan that runs in Kuala Lumpur, but not in downtown itself, only connects with two subways lines 1 and 4. After all this journey, the train arrives at the Kuala Lumpur Sentral terminal.

The second option that runs the same path is the KLIA Ekspres. Unlike the first, this one is non-stop. Is a little more expensive and the journey is shortened by 17 minutes. It is especially recommend for users with limited stay times, such as executives or business people, that need to travel with total celerity.

The Kuala Lumpur subway, since its opening in 1995, has experimented an aggressive development that’s still ongoing to this date. Practically, all the lines are planned to be expanded, but the project that actually stands out the most, due to its magnitude, is the construction of three more routes that, altogether, will add 156 km to the system. This is framed in the Malaysia Plan 10, which seeks the expansion and modernization of the entire transport system in Kuala Lumpur. This is the most expensive project in the history of the country, with views of sustainable development, based to foment the public transport system as the main form of getting around within the city.

For sure, the greatest pride of the all the residents of Kuala Lumpar are the sensational Petronas Towers that, until 2003, were the world’s highest skyscrapers. With 452m of height still stands out as one of the most important buildings in the Asian southeast. It is surrounded by boulevards, squares and fountains, like Lake Symphony, that offers a light show to all the spectators. You may find it just a few meters away from the route 5 KLCC station.

Also, a mandatory visiting place is Kuala Lumpur’s China Town. It has dozens of restaurants, all specialized in chines gastronomy. You might get the impression that you’ve a strong commercial presence, most products lack of the minimum quality expected for occidentals. To get there, just take the Kelana Jaya line (route 5) and arrive to the Pasar Seni station. This stop is also in charge of the Sungai Buloh–Kajang line (route 9). Map via www.myrapid.com.my
See map full resolution. It may take a little bit to load.