Carmelit is the underground subway and funicular system serving Haifa, Israel. It is believed to be the smallest subway system of the world made up of a single line, 6 stations and 1.8 km long track. Ha Carmelit Haifa Limited operates the line. It is the only subway of Israel. It connects city’s downtown area to Carmel Center in the most convenient and time-effective manner.

The subway of Haifa has a unique architecture. The trains circulate up and down of the Mount Carmel and hence the name. They were manufactured by a Swiss company Von Roll. The highest altitude reached by the trains is 268 meter. Around 800,000 people use the subway every year.

The construction of the lines was started in 1956. The system entered revenue service in 1959. However, in 1986 it was closed for improvements and renovation. It was planned that the abandoned rolling stocks would be displayed at the Israel Railway Museum but due to heavy cost of transportation that was not possible. They were kept in a scrapyard.

The renovated system was brought into service in 1992. In March 2015, the operation was suspended again for a short time as the system was not functioning properly. Since July 2015, it is operating uninterruptedly.

The hours of operation doesn’t remain constant during the whole week. From Sunday to Thursday, trains run from 6 O’ clock in the morning to 12 O’ clock in the night. On Friday and also on holidays, no trains come after 3 PM. On Saturdays, trains run from 7 PM until the midnight. On Yom Kippur eve, the subway stays open until 1 PM, on Passover eve until 2 PM. On Yom Kippur Day, it is totally closed. 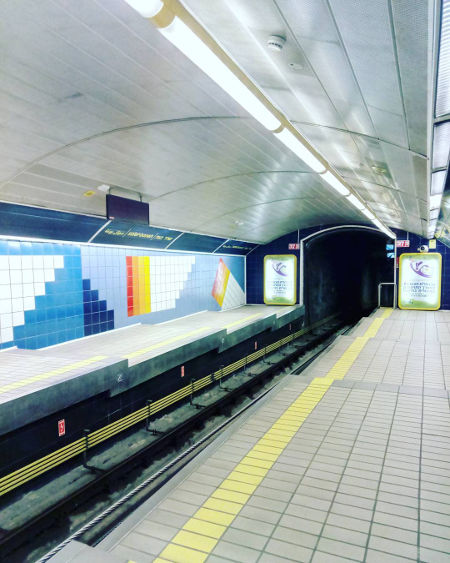 The frequency of trains is 10 minutes.

The trains are of a slanted design and the stations are in the form of stairs. 2-car trains run on this line and there are only 2 trains. They run on a single track but have a small double track portion where the trains cross.

The trains go either uphill or downhill. They operate automatically but there is an operator who is responsible for closing or in some cases for opening the doors. Both the trains run and stop together. A complete journey on the line takes only 8 minutes.

Stations are relatively small and all of them don’t have entry halls. They have platforms on both sides of the track, one for boarding and another for leaving the trains. In Massada and B'nei Tzion stations, only one platform is in use. The stairs of the platforms are marked with easily noticeable yellow canopy. There are signals and pylons showing the exact location of the trains. However, the stations are not suitable for handicaps.

Stations from down towards the uphill are:

The station has an elevation of 12 meters and is one of the system’s terminal points. It is in the Downtown Haifa where important government buildings and the courthouse are located. Haifa Central Railway Station is just a few minutes away from here. Some busy streets e.g. HaAtzmaut Street and Boulevard Palyam Street pass near this station.

The station allows useful connections. From here, passengers can easily reach the Haifa Center HaShmona Railway Station, Metronit (Line 1 and 2) and also to the Port of Haifa.

This station is located at 63 meters from the sea level. It is near to spots like Ha'atzmaut Park, Hanevi'im tower and The Haifa City Hall etc.

This station has an elevation of 70 meters. It takes you to the commercial district Hadar HaCarmel. From this station, Haifa Museum is easily accessible. This is the station to change to Line 3 of Metronit.

The station is located on the Massada Street in Hadar Hacarmel district. It has an elevation of 118 meters. It is near to the Haifa Science and Technology Museum and also to antique shops, art galleries, restaurants etc.

The station is located on the Golomb Street in Hadar Hacarmel. It has an elevation of 194 meters. It is near to Bnai Zion Medical Center and The Bahá'í World Center.

It is located in the Carmel Center neighborhood at 287 meters. It is near to Haifa Auditorium, Haifa's zoo, famous hotels etc.

The subway is not very popular. It was conceived to connect important residential and commercial areas but its coverage remained very restricted. It is unable to cover its operating costs. At this moment, the city municipality has no plan to extend it due mainly to financial reasons.

Carmelit Subway costs almost same as local buses but the advantage is that it saves much time and gives an enjoyable ride. Tickets are mainly of three types: Single journey tickets, 10 trip tickets and Monthly tickets. Rav Kav - multipurpose transport ticketing system is used for multi-ride tickets. These cards can be loaded from the designated machines on the stations and also in various locations within the city.

Students and senior citizens get a discount on adult fare. Children below 5 years and soldiers traveling in uniform can ride the trains for free. You have to buy the tickets from the ticket vending machines located in the stations and have to get it scanned at the entry gates of the paid area in order to get an access in the turnstile. You can use either coins or your credit card to pay the fare.

Get the details of the subway fare from here.

Passengers must abide by the rules set by the subway authority to ensure smooth functioning of the system.

Carmelite funicular ride is a real fun experience, more so if you keep in mind the following tips:

Map via en.wikipedia.org
See map full resolution. It may take a little bit to load.