The Copenhagen Metro is a modern driverless light rail system that has two lines, both of which offer service to 22 stations. Nine of those stations are built underground.

The lines are 20.4 kilometers in length, and are connected to three cities: Frederiksberg, Copenhagen and Tårnby. These cities belong to a metropolitan area.

The system has a connection available towards Copenhagen’s Airport, and it is available 24 hours a day, 7 days a week. The train frequency varies depending of the time of day. During peak hours, the train frequency ranges between two and three minutes.

The Copenhagen Metro is divided by zones, and the price of the tickets varies depending on the number of zones that the user wants to visit. A ticket for two zones costs 24 Danish kroner (DKK). A single ticket could be used for both the trains and the buses. In other words, you have many available options for transportation with a single payment.

A bit of history

Denmark’s Parliament approved the construction of a light rail service for Copenhagen through the Ørestad Law of 1992.

Afterwards, on 1993, many firms and corporations were created for the construction and inauguration of the system. The participants on this process were the district of Copenhagen and Frederiksberg, and the Ministry of Transport of Copenhagen, Denmark.

The system was part of the integral program of remodeling of the Ørestad area. This was done with the help of the Ørestad Development Corporation, which was in charge of these renovation works in the city. 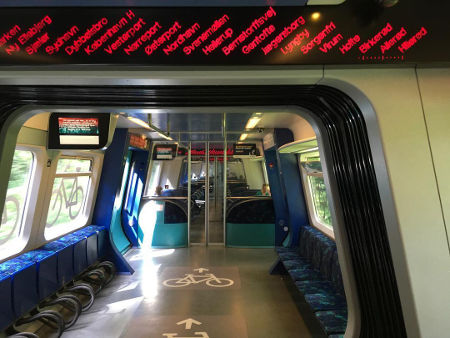 The Copenhagen Metro stations have a Scandinavian classic design which is both aesthetic and practical. Nine of the stations are located underground, and 13 are located at surface-level.

To access the underground stations, you´ll need to go through a tower of elevators, which are decorated with glass pyramids. These pyramids´ function is to illuminate the stations with natural light in order to save energy.

The metro is comprised of 34 trains of three wagons each. These trains have “flexible zones”, or in other words, seats that can be folded by the sides to give space to people so that they can put their strollers, wheelchairs, and bicycles.

The metro’s headquarters are located at the Vestamage station. At this place, the routes for all lines are scheduled and monitored. 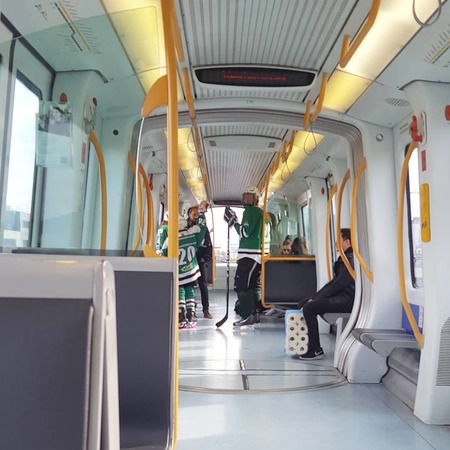 The green line is the M1 line. It has 15 stations, and it has a route that begins at Vanløse station and ends at Vestamager station. This route has a length of 13.9 kilometers.

The metro is the main transportation option for both the locals and foreigners that want to move throughout the city. It will take you approximately 23 minutes to go from one end of the city to the other within this line.

The M1 line allows you to reach points of interest for tourists and Copenhagen’s citizens, which include universities, music academies and malls. 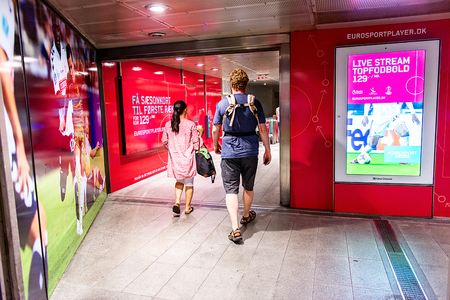 The yellow line is the M2 line. It is 14.2 kilometers long, and it has 16 stations. The trains of this line begin their journey at Lufthavnen, and they go through downtown Copenhagen to reach to Vanløse. The estimated time that the trains take to go from one end of the line to the other is of 24 minutes.

Also, the M2 line goes directly to the Copenhagen airport, therefore, you don’t need to make a transfer to another transportation service. The metro goes towards the airport’s terminal 3, where the Lufthavnen station is located.

The passengers that arrive to the airport also have the opportunity to make a transfer to board a train to Stockholm. They could also board other Danish rail services (such as the Danske Statsbaner, also known as DSB.) Finally, the passengers also have the opportunity to board other trains that go beyond Denmark’s border, such as the trains to Sweden.

The Amagerbro station from line M2 is a reference point to travel quickly to restaurants, stores, and leisure facilities. This station is also close to residential areas, industrial parks, beaches, etc. 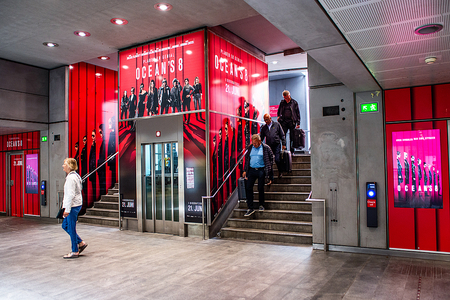 The system offers its services 24/7. The train frequency changes whenever the trains start getting crowded.

The peak hours for the Copenhagen metro range between 7:00 and 9:00 in the morning, and range between 2:00 pm and 6:00 pm. The train frequency during these hours are between 2 and 4 minutes.

Connections between lines can be done on the metropolitan transportation system of Copenhagen. You can also connect to other services, including the S-Train, the regional rails, to the airport, and to international trains.

You could make connections between the M1 and M2 lines at the following stations: Vanløse, Flintholm, Nørreport and Christianshavn.

In the following stations, you could make connections to the S-Train, the regional rail services, and the Copenhagen airport: 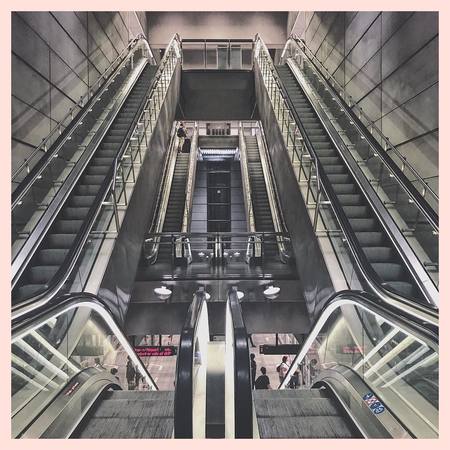 Copenhagen has designed an integrated payment system for the entire public transportation network. There are many types of tickets available, and their price depends on the user’s needs and the zones that they wish to travel to.

A ticket can be used for the metro, the buses, and other trains services available in the city.

You can obtain the travel tickets at the points of sale of the metro, at the stations’ vending machines, and at the airport. These machines accept cash and credit cards.

You could also buy the tickets by the internet through an online app available for smartphones with iOS and Android operating systems.

Gives unlimited access to all the zones of the system, regardless of if you travel by bus, train, metro. You can also use this ticket to board the buses that go to the ports.

This type of ticket costs 150 DKK for adults, and 75 DKK for people under 16 years of age. 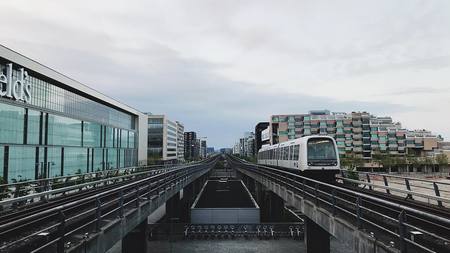 There are special cards that are recommended for tourists since it brings them a lot of journeys on the metro for an extended amount of time within the city. These cards offer different prices depending on the number of places that you want to visit, the places of interest that you want to go to, among other specifications. This card will allow tourists to save money and enjoy their stay on the city.

There are also different cards which last for different periods of time for the Copenhagen Card, which are: the 24 hour card, the 48 hour card, the 72 hour card, and the 120 hour card. You can easily pre-order them online, so you can receive this card at home. 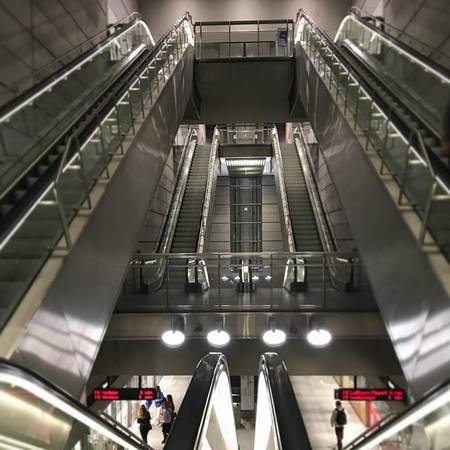 Children under 12 years of age travel for free: Up to two children per adult can travel for free. Children between the ages of 12 and 16 can get a discount on their tickets.

Duration of each ticket according to the number of zones travelled:

You can board and disembark the trains as many times as you want, as long as you are within the time limit that your ticket allows you.

Pay from your phone through the mobile app:

Paying from your phone is quite simple. First, download the app called "DOT Mobilbilletter" on the App Store or in Google Play. Next, choose your language, and then select the ticket type and fare that you want. Finally, you will have to give your credit card information. You could also buy your tickets for the bus, train, and the metro through this app.

Copenhagen is unique since there are incentives for the people to use their bicycles on this city, which is a strategy to protect the environment. Bicycles are also allowed on the metro. You need to buy a special ticket so that you can bring your bicycle to the metro.

There are times where bicycles are restricted on the metro, though. During peak hours, which are from Monday to Friday, between 7:00 and 9:00 and between 15:30 and 17:30, bicycles are not allowed on the metro. During June, July, and August, bicycles are allowed all day long, as long as you show a valid bicycle ticket.

To bring you bicycle inside a metro wagon, you need to move it to the center of the wagon. The system also offers a bike parking service in all of the metro stations. 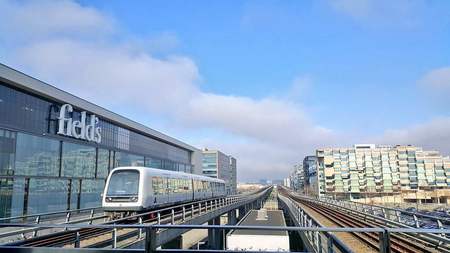 The Copenhagen metro allows people to bring small dogs in bags. These dogs travel for free.

To travel with dogs breeds of big size, you will need to buy a ticket for children. The only big dogs that travel for free are guide dogs.

Even though big dogs are welcome on the Copenhagen metro, they should be on a leash, and they should stay away from seats reserved for allergic people. These seats are the first and last six seats on the train.

Parking services by the metro

Copenhagen is probably the city in Europe with the least number of car owners. It is estimated that 50% of the people uses bicycles. By summing the length of all the bicycle routes in Copenhagen, we get 320 kilometers of road available for bikes.

For that reason, the only parking service available at the metro system is parking for bicycles. If you want to park your car, you need to use the nearby private parking services.

All users should obey the rules of the metro. If you disobey these rules, you may get fined and be asked to leave the metro´s facilities. 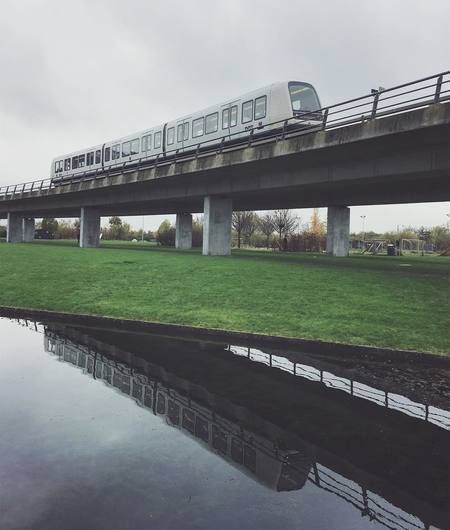 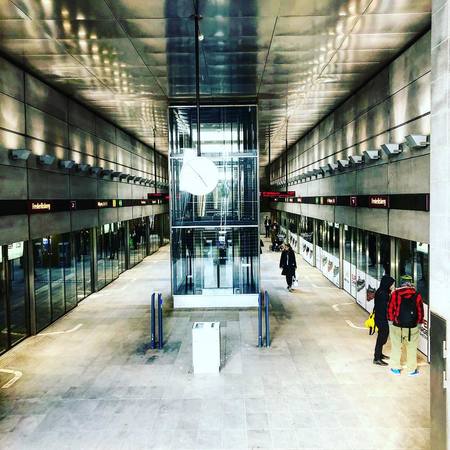 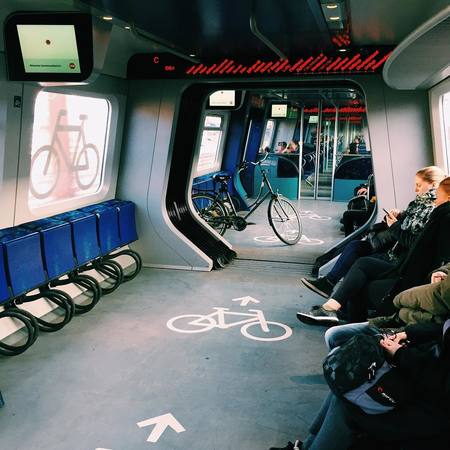 There are plans to expand the Copenhagen Metro, which include the construction of the following lines:

It takes 13 minutes to go from the airport to downtown Copenhagen by using the metro’s M2 line. From the M2 line, you can make a transfer to the M1 line or, in case that you need to go to an area within the city’s outskirts, to the regional rail services. 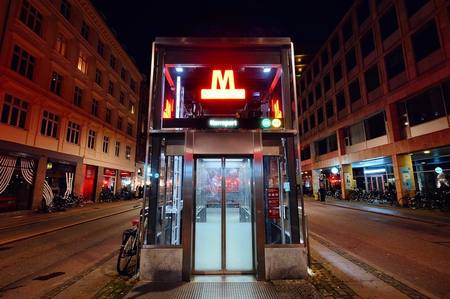 How to reach the Copenhagen-Kastrup Airport:

To go from Copenhagen to the Kastrup Airport you need to take the metro’s M2 line. If you are located near a station from the M1 line, you could make a transfer to a M2 line train without a problem. You could make the connection at any of the transfer stations.

You could also make a transfer to go to Stockholm from the Copenhagen-Kastrup airport. Additionally, you could board a train towards Sweden at the airport.

Tourist attractions to watch by using the Copenhagen Metro

Copenhagen has a lot of touristic attractions. You could visit many of them by using the metro system. Some of them are:

Map via intl.m.dk
See map full resolution. It may take a little bit to load.