The Manila Metro is also known as the MRT 3. It was inaugurated on December 15th, 1999. It only has one line and 13 stations. The metro makes connections to trains from the Light Rail Transit System, buses and ferries. You can go from the airport to the closest via a bus to Taft Avenue station. The metro is open from 4:30 am to 10:40 pm. The ticket prices vary between 13 and 100 Philippine Pesos. Avoid peak hours to avoid being uncomfortable in the metro. You cannot bring tin cans to the metro. The pre-recorded messages in the metro speak in English and in Tagalog. A line called MRT 7 will be built for the metro. Many touristic attractions are located near Araneta Center - Cubao station.

Manila is the capital of the Philippines. Over 100 languages are spoken in the city. However, most people speak Filipino and English. Manila has a population of over 1.7 million people, making it the second most populated city of the country. This city has a wide variety of ethnicities. Tourism is one of the most important economic activities in Manila. Some of the famous holidays in the city are Manila Day and Rizal Day. The city’s airport is called Ninoy Aquino International Airport.

Public transportation in Manila is comprised of trains from the Light Rail Transit System, the metro, buses, ferries, trains from the Philippine National Railways, and jeepneys. In some cases, you could also ride a horse-drawn carriage. The metro is owned by Metro Rail Transit Corporation. 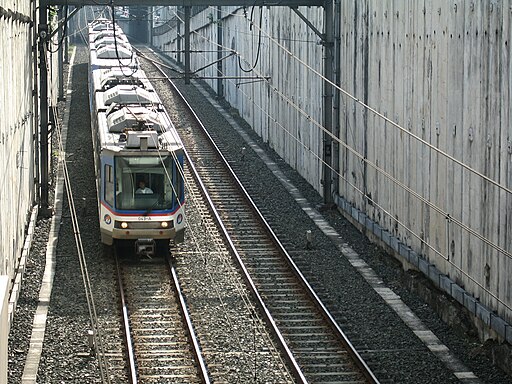 The metro has one line, called the MRT Line 3. This line is comprised of 13 stations. The stations’ names are:

1. North Avenue: This station, just like most stations in this metro, is elevated. It is located in North Avenue, near Epifanio de los Santos Avenue in Diliman, Quezon City. This is one of the terminals of the metro. There is a warehouse for the metro’s rail cars near the station. The next station in line is Quezon Avenue station. There are many malls near this station, such as SM City North EDSA and TriNoma. From this station, you can go to Sogo Hotel North EDSA, the Philippine Medical Association, the Philam Soccer Field, Triangle Park, Quezon Memorial Circle, Ninoy Aquino Parks and Wildlife Center, among other places.

2. Kamuning: It is located in Quezon City in Scout Area of Diliman, close to Barangay Kamuning. An alternate name for the station is GMA-Kamuning. The next station in line to Araneta Center - Cubao. You can board bike taxis, taxis, buses, and jeepneys near the station. Some points of interest near this station are The Public - Private Partnership Center, the GMA Network, the Land Transportation Office, the National Statistics Office, the Department of Public Works and Highways, the Quezon City Hall, and the Philippine Heart Center.

3. Quezon Avenue: This station is located in Quezon Avenue, Quezon City, in Diliman. The next station in line is Kamuning. From this station, you can also board jeepneys, buses, and taxis. The closest mall is Centris Walk shopping center. Some important places located near this station are PAGASA Complex, ABS-CBN, Court of Tax Appeals, the Office of the Ombudsman, the Lung Center of the Philippines, and Centris Station.

4. Santolan - Annapolis: It is located near Santolan Road and Annapolis Street, between San Juan City and Quezon City. An alternate name for this station is Santolan Station. The next station in line is Ortigas. The closest mall is Greenhills Shopping Center. You can board bike taxis that are located close to this station. Other important places near this station are the headquarters of the Philippine National Police, Camp Aguinaldo, Barangay Wack Wack Greenhills East, and V.V. Soliven Building.

5. Araneta Center - Cubao: It is located in Quezon City in Cubao, close to Araneta Center. An alternate name for the station is Cubao Station. The next station in line is Santolan - Annapolis. This station is also a station for the trains from the LRT line 2. The closest malls are Ali Mall, Farmers Plaza, and Gateway Mall. A popular destination is Smart Araneta Coliseum, where concerts and sporting events are held.

6. Shaw Boulevard: It is located above Shaw Boulevard, in Ortigas Center. This is the only station that has both a spur route and a reserve route. The next station in line is Boni. This station is in the middle of the metro’s network. There are jeepneys with air conditioning nearby. This station also works as a terminal for jeepneys. The closest malls are Pavilion Mall, Shangri-La Plaza, Starmall, and SM Megamall. The headquarters of CNN Philippines is nearby. Some nearby recreational facilities are Wack Wack Golf and Country Club, PhilSports Arena, and Ynares Sports Arena. Other important places that are nearby are EDSA Shangri-La Hotel, University of Asia and the Pacific, the headquarters of the Department of Education, St. Paul College Pasig, Capitol Commons, Lourdes School of Mandaluyong, San Miguel Corporation Building, and Astoria Plaza.

7. Ortigas: It is located at Ortigas Center in Mandaluyong, and close to Ortigas Avenue. The next station in line is Shaw Boulevard. The closest places to board a bus or a taxi are SM Megamall and Robinson’s Galleria. The closest shopping centers are St. Francis Square Mall, The Podium, SM Megamall and Robinson’s Galleria. The nearby points of interest are Meralco, the Philippine Stock Exchange, UnionBank, the headquarters of the Asian Development Bank, the Philippine Overseas Employment Administration, Securities and Exchange Commission, the Department of Transportation, La Salle Green Hills, Saint Pedro Poveda College, Oakwood Premier, Crowne Plaza, Meralco Theater, EDSA shrine, The Medical City, among others.

8. Guadalupe: It is located in Guadalupe Nuevo, Makati. The next station in line is Buendia station. The closest mall is Guadalupe Shopping Center. You can board auto rickshaws close to this station. It is located near the Pasig River. The theological colleges of Our Lady of Guadalupe Minor Seminary and San Carlos Seminary are near this station. Among the important places close to this station are the University of Makati, the Makati City Hall, Hotel Sogo, Nuestra Señora de Gracia Church, and Guadalupe Nuevo Cloverleaf Park.

9. Boni: It is located between Pioneer Street and Boni Avenue in Mandaluyong. The next station in line is Guadalupe. An alternate name for this station is Boni Avenue Station. Markets and restaurants are near this station. There is a nearby bike taxi terminal. There is also a nearby terminal for jeepneys. Students frequently use this station since it is close to Rizal Technological University. Although most stations use side platforms, this station uses an island platform. Other important places nearby are the Go Hotel, Forum Robinsons, Robinsons Cybergate, TV5 Media Center, SM Light Residences, Victor Potenciano Medical Center, Paragon Plaza Building, and GA Twin Towers.

10. Ayala: This station is located in San Lorenzo, Makati, close to Ayala Avenue and Ayala Center. This is the second underground station for the metro. The next station in line is Magallanes. This is one of the stations with the biggest number of elevators, escalators, and stairs. There is a mall inside the station, and there are restaurants and shops just outside the station. The closest malls are Ayala Center, Greenbelt, Rustan’s, SM Makati, Glorietta, and The Landmark. This is one of the few stations with a reserve track. Close to this station you will find the headquarters of banks like the China Bank, the Bank of the Philippine Islands, the Standard Chartered Bank Philippines, Citibank Philippines, RCBC, and HSBC Philippines. Some hotels that you can find close to this station are the Ascott Makati, the InterContinental Hotel, Peninsula Manila, the New World Hotel, the Dusit Hotel, and the Makati Shangri-La Hotel. Some of the educational points of interest near this station are the Asian Institute of Management, the Ayala Museum, and the Filipinos Heritage Library. Other nearby points of interest are the Dasmariñas villages, the Forbes Park, the Ayala Triangle Gardens, the Bonifacio Global City, and the Philippine Stock Exchange.

11. Buendia: It is located in Gil Puyat Avenue in Urdaneta, Makati. An alternate name for this station is Gil Puyat Station. Unlike most stations in the metro, this station is underground. The next station in line is Ayala. Its platform is an island platform. This station, unlike other stations, has two switch tracks. There are nearby jeepneys that offer rides to Pasay City. Some nearby hotels are the Frasier Place and the Mandarin Oriental. You can find nearby entertainment facilities at Jupiter Street and Makati Avenue. There are many banks in this area. You can reach the headquarters of Banco de Oro, the Metropolitan Bank Trust Company, the Rizal Commercial Banking Corporation, and the Development Bank of the Philippines. Some other important offices located nearby are the Department of Energy, the Metropolitan Manila Development Authority, and the Department of Trade and Industry.

12. Magallanes: It is located in Chico Roces Avenue in Magallanes, Makati. The next station in line is Taft Avenue. It also works as a station for the trains of the Philippine National Railways. This is another of the few stations with a reserve track. The station is named after the man who discovered the Philippines. This station is close to an important highway known as the South Luzon Expressway. The closest malls are the Magallanes Center, the Makati Cinema Square, and the Alphaland Southgate Mall. The schools near the station are the Colegio San Agustin - Makati, Asia Pacific College, Don Bosco Technical College, Assumption College, and Makati Hope Christian School. Some of the important business offices near this station are the headquarters of GlaxoSmithKline and Levi’s. You can take buses within this station that go to the South Luzon Expressway. You could also take jeepneys to Pasay, Makati Central Business District, and to Makati. 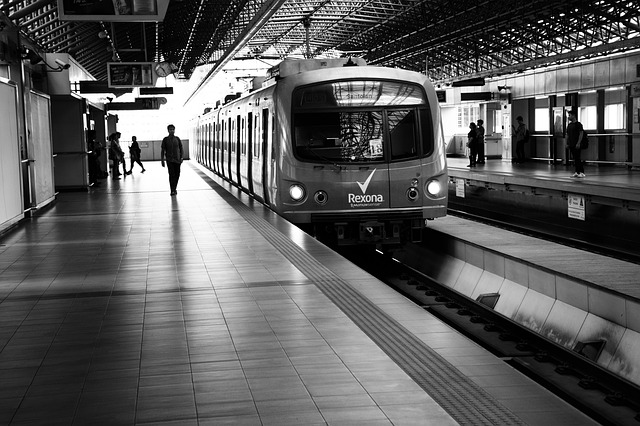 The metro makes connections with buses, trains from the Light Rail Transit System (LRT,) and ferries. The connections available at each station are the following:

The closest metro station to Ninoy Aquino International Airport is Taft Avenue station. To go from this airport to Taft Avenue, you must first walk to Roxas - NAIA Bus station Northbound. Then, board the Coastal Mall - Navotas Terminal via EDSA bus, and travel towards Navotas for 18 minutes. After four stops, get off at EDSA Taft Avenue Bus Station. Finally, walk around 290 meters to Epifanio de los Santos Avenue, Pasay, 1300.

A new line, line MRT 7, has been proposed. This line will have the following stations: San Jose del Monte, Quirino, Tala, Regalado Avenue, Mindanao Avenue, Manggahan, Doña Carmen, Don Antonio, Batasan, Tandang Sora, Don Antonio, Quezon Memorial, University Avenue, and North Avenue. The current line will be expanded to increase ridership to over 510,000 people per day. To do this, new trains have been purchased. Around 50 Light Rail Vehicles were bought from the company Dalian Locomotive.

Araneta Center - Cubao station will be used as a reference point. Follow these instructions to reach these attractions by using the metro:

2) Coconut Palace: The trip lasts one hour and 15 minutes. From Araneta Center - Cubao, board the metro, and head towards North Avenue for 16 minutes. After six stops, get off at Buendia. Then, board the Baclaran - Malanday via EDSA Ayala bus, and head towards Malanday for 35 minutes. After five stops, get off at Gil Puyat Avenue. Finally, walk to Cultural Center of the Philippines Complex, Roxas Boulevard, Coconut Palace.

4) Metropolitan Museum of Manila: The trip lasts one hour and 10 minutes. From Araneta Center - Cubao, board the metro, and head towards North Avenue for 14 minutes. After six stops, get off at Buendia. Next, board the Baclaran - Malanday via EDSA Ayala bus, and head towards Malanday for 35 minutes. After five stops, get off at Gil Puyat Avenue. Finally, walk to BSP Complex, Roxas Boulevard, Malate.