The Helsinki Metro has one line and 17 stations along a 21 km route. Normal operating hours are from 5 a.m. to 11 p.m. Single fare tickets go for 2.90 euro. Bikes and pets are allowed. You can travel from the airport to the city centre by metro.

The Helsinki metro is a public transport system that runs within the Finnish capital. It is the only subway system within the country, and is considered the northernmost subway in the world because of its location. The city of Helsinki is home to about 1.4 million people within its metropolitan area, so demand for transport is high. It is the most populated Finnish city, as well as the cultural, economic and financial centre of the Scandinavian nation.

It was back in 1955 that the local authorities contemplated the possibility of constructing a public transport system that met projected growth and future demand. Initially, a tram network was conceived as a solution (which is still operational to date). However, after consideration of studies conducted by German, Swedish and Danish specialists, a metro system was recommended in 1964.

Construction of the metro system began in 1969, but it was not until 1982 that the opening was announced. During that time, the contractor implemented different pilot tests with several trains, taking into consideration the weather and low temperatures that Helsinki has most of the year. At the beginning, the trains only served the eastern part of the city, but service was gradually expanded towards the city centre. The western side of the city is expected to be covered shortly.

At present day, there are 21.1 km of service lines distributed between 17 stations along a single line. The system mobilizes more than 200,000 people each day, so it has become a key element to public transport within the city. Most of the stations are located on the surface, and only the ones in the city centre are subterranean. 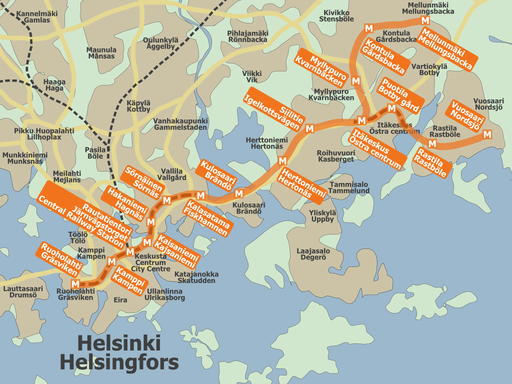 The Helsinki metro has only one line, although preliminary work on the second line is starting, and expansion of the current one is already underway. It has three terminal stations, one in the city centre and two on the eastern side of the city. The line branches out into two different paths at Itäkeskus station.

Mellunmäki station, at the northeast end of the line, has the peculiar distinction of being the northernmost metro terminal in the world. It serves a residential zone where commerce is scarce, but demand is rather high on work days.

Vuosaari terminal station is located to the southeast, and serves the district with the same name. It was opened to the public in 1998, and is relatively new compared to the first stations inaugurated in 1982. Both Mellunmäki and Vuosaari stations connect to the Ruoholahti neighborhood in the centre of Helsinki. In the future, service is expected to reach out towards the western part of the city. All names of the stations are written in both Finnish and Swedish, as both are the official languages of the country.

Hakaniemi/ Hagnäs: inaugurated in 1982, it serves the districts of Hakaniemi and Kallio, located within the city centre.

Herttoniemi/ Hertonäs: it commenced operations in 1982, in the Herttoniemi neighborhood, to the east of the Finnish capital.

Itäkeskus/ Östra centrum: also inaugurated in 1982, its name is taken from the Itäkeskus mall, located just in front of the station.

Helsingin yliopisto/ Helsingfors universitet: it was opened in 1995, and connects the Kaisaniemin neighborhood in the city centre. It also serves the University of Helsinki, which it gets its name from.

Kalasatama/ Fiskehamnen: it is one of the most recent additions to the system, opened in 2007. It is in the eastern part of the Sörnäinen neighborhood.

Kamppi/ Kampen: it operates since 1983. It gives service to the district of Kamppi, within the city centre. It is also a transfer hub, connecting the metro to a bus station and mall with the same name.

Kontula/ Gårdsbacka: it was opened in 1986, servicing the eastern neighborhood of Kontula.

Kulosaari/ Brändö: it entered service in 1982, and is located on the island of Kulosaari, within the district of the same name.

Puotila/ Botby gård: this station is relatively new, being opened in 1998. It has since served the Eastern districts of Puotila and Puotinharju.

Rautatientori/ Järnvägstorget: also known as the Central Railway Station, it was opened to the public in 1982 in the Asematunneli neighborhood, in the city centre.

Rastila/ Rastböle: it started service in 1998, and connects with the residential complex of Meri-Rastila and Rastila within the Vuosaari district, to the east of Helsinki.

Ruoholahti/ Gräsviken: it commenced operations in 1993, providing service to the southwestern district of Ruoholahti.

Siilitie/ Igelkottsvägen: it dates to 1982, as it was one of the first operational stations of the Helsinki metro. It services the northern Herttoniemi area.

Sörnäinen/ Sörnäs: opened in 1984, it is the largest station of the current system and provides service to the Sörnäinen and Kallio districts, in the city centre.

Vuosaari/ Nordsjö: it is one of the terminal stations of the system, located to the east, in the Vuosaari district. It was opened in 1998.

The Helsinki metro operates regularly from 5 a.m. to 11 p.m., Monday through Friday. On Saturdays, it is open from 6 a.m. and closes later, at 1 a.m. The metro is open on Sundays from 7 a.m. to midnight. 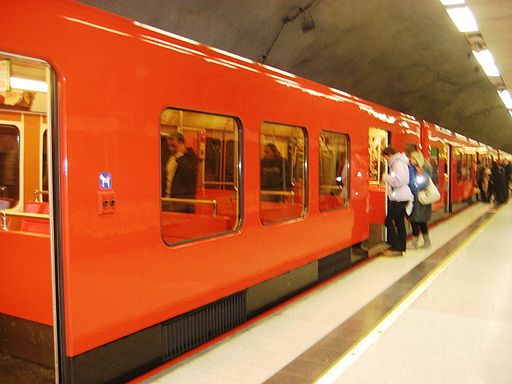 You may buy tickets on any of are three distinct categories: single tickets, day tickets and travel cards. All may be acquired at the stations or via a dedicated app. It is also possible to buy tickets via SMS, as the metro highly values user’s comfort. The options are as follow:

Single tickets: they cost €2.90, and can be bought from the app (mobile ticket) or via an SMS. They are valid for all public transport systems within the city, including metro, tram and ferry.

Day tickets: this ticket enables the user to use any transport system for an entire day, at a base price of 9 euro per person. However, tickets lasting up to 7 days may be purchased. Prices are as follow:

Travel cards: these cards are designed for people who use the metro system frequently. They can also be used with trams and ferries, albeit not with the same plastic. Each service has a different card. They are available on three different prices:

Students: all full-time students have the right to obtain a travel card with 50% off in all transport systems within Helsinki. To apply, you must meet the following requirements:

Elderly: to obtain the benefits of discount on the metro, elderly must comply with the following requirements:

People with disabilities: in case of reduced mobility or chronic disease, users may receive a 25% discount on the Helsinki metro. For people in wheelchairs the trip is free, as well as for their companion.

Most of the Helsinki metro stations are connected to another form of public transport, be that bus, tram or ferry. The most important of these are:

Baby trolleys: Users may use their trolleys if they so desire. However, once inside the train, the trolley must be folded as to not disturb other passengers. Only 8 trolleys may be transported in a single wagon at a time.

Bicycles: Bicycles are allowed at no extra cost within the system, to the extent that they are not a nuisance to other passengers. Bicycles are not to be ridden while inside the trains or stations. Personnel may reserve the right of entry to bicycles if the system is crowded.

Luggage: Luggage or articles being transported by users may be taken into the trains as long as they do not represent a nuisance to other passengers. Operators may deny entry if the luggage is deemed too large or cumbersome.

Pets: Domestic animals are allowed. However, they must be on leash or within transporting containers and not be disturbing other passengers. They travel free of charge. Small pets may be held over the owner’s lap, otherwise, they must be transported on the train’s floor.

To get to the Helsinki Airport using the metro, users need to reach the central station: Rautatientori station. From there, users may board the train system that serves the suburbs. Passengers must take line ‘I’ at tracks 1-3 or line ‘P’, at tracks 16-18. The journey takes around 25 minutes (line ‘P’ takes around 28 minutes).

If you desire a second option or do not want to travel by train, you may go to Hakaniemi station near the city centre, where bus route 617 connects directly to the airport. This trip takes around 45 minutes and has a cost of €5.50 for adults and €2.80 for minors. Similarly, if you arrive at the airport and wish to travel to the city centre, you may take a bus just in front of the terminal, outside of the airport. Pay attention for route 617, as there are several other bus lines that serve the terminal and connect to the suburbs.

An expansion of the system is currently underway, and will comprise a new 14 km route and 8 stations. Works began in 2009, and the first stage is expected to be completed in 2017. This first stage will run from Ruoholahti central station to Matinkylä, in the Iso Omena mall.

The second stage will run from Matinkylä to Kivenlahti, expanding the metro to the west by around 7 km and incorporating 5 new stations along the way. Construction on this phase began in 2014 and is expected to be completed around 2020.

On another note, there is already second line is already being planned, and it is projected to run from Kamppi station in downtown Helsinki to the northern areas of the city, where it will probably connect with the airport. The city has taken very seriously this new project, as it is being thoroughly discussed in public assemblies. Experts claim that the city will not need such a robust transport system until the 2030’s, but a tunnel is already being excavated at Kamppi station, to anticipate some work until then.

Moreover, the company tasked with running everything is already busy renovating the rolling stock itself, substituting trains considered obsolete with new automated ones, so a major project like an entire new line cannot be undertaken at the moment.

At the central station, Rautatientori, tourists may visit the wonderful Ateneum Art Museum. The building is excellently preserved, and has ample spaces for entertainment that are nonetheless cozy. It’s a dynamic place with constant new expos and events such as a recent expo on Alvar Aalto, a renown Finnish architect and designer that is notable for his retrospective take on his natal Finland. There are guided tours on Sundays, available on English.

Between Rautatientori and Kamppi stations lays the Kamppi Chapel of Silence, a warm and cozy chapel built on a minimalistic style out of wood and modern materials. It is intended as a site to calm oneself and energize those who visit. Located right in downtown Helsinki, it is an oasis of calm and silence that welcomes everyone and anyone. It has become a remarkable landmark and is an obligated visit if you travel through the city, where you may take refuge from the harsh climate the city has in winter.

The Rautatientori central station is by itself a tourist attraction. Its impressive architecture captivates anyone who visits the Finnish capital for the first time. With multiple coffee shops and busy commerce, it is an ideal site for a casual meet-ups with friends and acquaintances. At nightfall, spherical lamps give life to a beautiful scene, especially worthy for couples looking for romance.