The Antwerp Metro is not a regular metro system, it’s a network of underground tunnels where tramway lines circulate. It has a total distance of 13.5 km that serves 19 stations. Only 11 of them are operational, and only 11.2 km of the route are open to the public.

The price of a single ticket is 3 euros. The Antwerp Metro works everyday of the week from 4:30am to 1:00 am of the next day. The frecuency of the tramway in a rush hour is about 5 minutes and 15 minutes in a regular schedule.

Antwerp is located in Belgium and it’s the second most populated city in the European nation, with 1.200.000 residents in the metropolitan area. This city can be found behind Brussels, the capital of the country, in the northern region, specifically in Flandes, where the culture and language is different from the southern region, Valonia.

During the XX century the metropolis was affected by the inclemencies of the second world war, being occupied by the Nazis from 1940 to 1944. However, with the end of the war, the amberian people were able to rebuild their spaces to transform them in the richest areas of Belgium.

So then, with the economic development that was experimented by the territory in the 60’s, 70’s and 80’s, Antwerp significantly modernized their urban furniture, in which it stands out their traditional tramway system.

With the intentions to attend the demand of transportation, and with the sights on the future, the local authorities put into operation the development of the Antwerp Metro, even though this never happened.

In 1975 the first sections of the planned underground system were inaugurated, but not with the purpose of using metro trains in tunnels. Instead of that, the underground rails were used as a way of expansion for the tramways, that’s why the Antwerp Metro was baptized as “Premetro”.

This line connects the Hoboken district, in the south of the city, to the town of Merksem, in the north. It has a total length of 14.3 kilometers and 32 stations, and only 7 of them go through the underground grid of the Antwerp Metro. It’s one of the oldest routes of the city, mobilizing more than 10 million users with their vehicles annually. It’s identified on the maps of the service by having the number 2 on a dark green background. Likewise, the stops that make their way through the “Premetro” are: Plantin, Diamant, Astrid, Elisabeth, Handel, Schijnpoort and Sport. 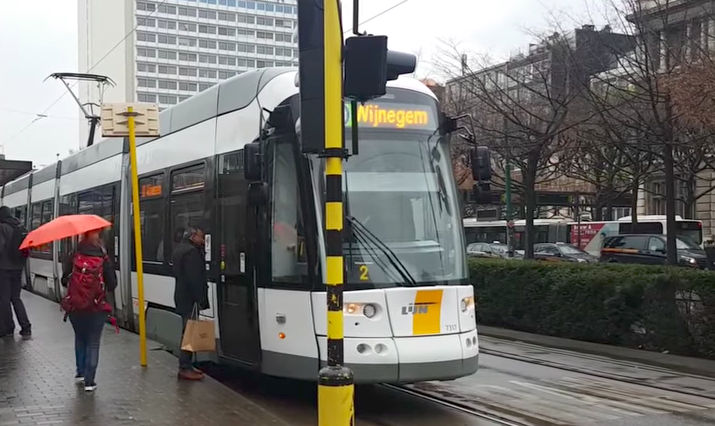 This route links the Merksem district, that is located in the north of Antwerp, to the Melsele neighborhood to the west. It has 14.37 kilometers distributed in 26 stations, 8 of these are located in the network of underground tunnels. Line 2 is one of the oldest routes, dating back to 1902. Transports nearly 30 million passengers each year. It can be identified in the maps of the system by having a 3 on a dark yellow background. The 8 underground stations of the line 3 are: Sport, Schijnpoort, Handel, Elisabeth, Astrid, Meir, Groenplaats and Van Eeden.

This route connects Olympiade district that is at the south of the flemish city to the Luchtbal area at north. It has 13 kilometers of total route, which are distributed in 26 commercial stations. Only 7 stops are underground, integrating the Premetro. Dates from 1938. Transports nearly 6 million passengers each year. The passengers can identify the line in the maps for having a number 6 on a shiny fuchsia background. The 7 underground stations are: Sport, Schijnpoort, Handel, Elisabeth, Astrid, Diamant and Plantin.

This line connects the Wommelgem town located in the north of the city with the Zuid district in the south of the city. It has 9 kilometers of total route, serving it’s 16 operational stations. Only two of the stations are underground. It’s a fairly recent line compared to other similar lines, since it dates back to 1988. Transports 750.000 passengers each year. The passengers can identify this line in the map for having a number 8 on a pink background. The underground stops are: Zegel and Astrid.

It links the town of Eksterlaar in the west to the Linkeroever sector in the east. It has 9.28 kilometers, which pass through 18 stations. Of that 18 stations, 5 belongs to the Antwerp Metro or Premetro. Similar to route 8, line 9 is of early construction, being the year 1988 when it came into operation, to mobilize currently more than 10 million passengers annually. The passengers can identify this line in the map for having a number 9 on a orange background. The 5 underground stations are: Plantin, Diamant, Meir, Groenplaats and Van Eeden.

It connects the Wijnegem district in the west of the Flemish city with Schoonselhof, a district located in the south of the polis. It has 14.5 kilometers, including a total of 32 stations. Of this total, only 2 transit the Premetro. It is one of the oldest tram routes in the metropolis, dating from 1873. Today it moves about 6 million passengers a year. It can be identified by having a number 10 on a light green background. The two underground stops are Zegel and Astrid.

Thais route was designed to link the Boechout sector south-east of Antwerp to the town of Linkeroever in the west. It has 14.2 kilometers of route, including 27 stations, 5 of which are underground. It transports a large number of passengers, specifically 20 million. It’s identified by a green number 15 on a white background. The 5 stops belonging to the Premetro system are: Plantin, Diamant, Meir, Groenplaats and Van Eeden. 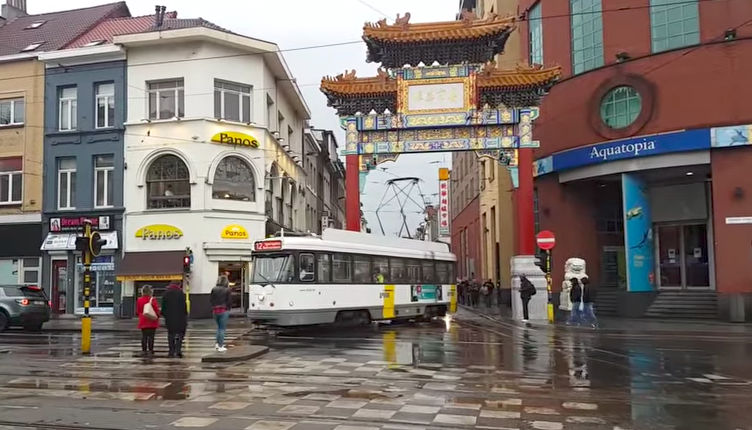 As it is a tunnel system that interconnects several tram lines, the Antwerp Metro has several connections to different routes in each of its 11 commercial stations. The following are the options available to Premetro users:

The Antwerp Metro has different plans to make it easier for users to use the system. From the classic tickets to cards with special plans adapted to the passenger's requirements. Following, plans and forms of payment in the city's trams:

Children under 6 years of age travel completely free of charge on the Antwerp Metro system.

Soldiers injured in combat will not pay any fees for using tramway services.

People with disabilities also have the benefit of travelling free of charge through the different stations and trains in the system.

The tramway network is open from 4:30 am to 1:00 am the following day. A very convenient schedule for those who work at night, or whose work requires their presence early in the morning.

There is no distinction between public holidays and normal days, including weekends. The schedule for trains is always the same from Monday to Sunday. The vehicles service the stations with a frequency of 10-15 minutes, although the number of trams increases according to the demand at peak times, reducing the waiting time to just 5 minutes. 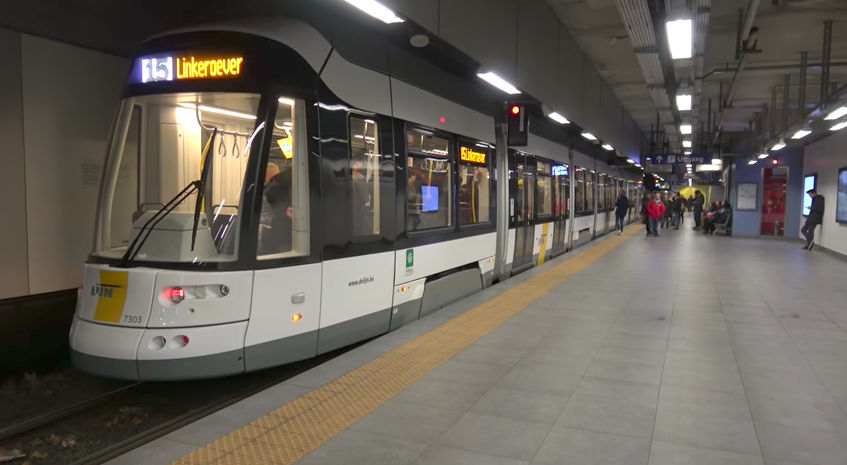 Like all public transport systems worldwide, the Antwerp Metro has a series of rules to guarantee the proper functioning of the system, as well as the best possible coexistence between passengers. Here are the Premetro rules:

There is no direct connection between the Antwerp-Deurne Airport and the city's tramway system. However, it’s possible to take one of its operational lines, make a transfer and travel to the air terminal. To do this, simply follow the instructions below:

First, take the tram line 9 in the direction of Eksterlaar until you reach Berchem Groenenhoek station. If you leave from the Mier station, the journey only takes about 15 minutes. When you reach your destination, you will have to get off the tram to walk about 200 meters to the bus stop with the same name as the tram station. There you can wait for any of the 51,52 or 53 bus routes, which go to the airport. After about 6 minutes you should be at your destination. The bus stop to get off at is called Deurne Luchthaven, located 100 meters from the air terminal.

Similarly, if your goal is to head to the city center from Antwerp-Deurne Airport, the route is similar. When you are in the air terminal, you will have to leave the premises, walk 100 meters to the Deurne Luchthaven bus stop, where you will have to wait for route 51 52, or 53, which will take you a few steps from the Berchem Groenenhoek tramway station, where line 9 runs. In turn, this train route will connect you to the entire city, as public transport in Antwerp is highly interconnected.

Sportpaleis is a multi-purpose complex where concerts, sporting events, festivals and fairs are held. Although the enclosure was originally built to house only events related to the world of sport, today it is presented as a place full of diverse celebrations throughout the year. It dates from 1933. Billboard magazine considers it the second most visited space for organizing events in the world, second only to Madison Square Garden in New York (USA). It has a roof covering 11,600 m2, which has witnessed important concerts, performed by renowned personalities such as Beyoncé, Britney Spears or Lady Gaga.

Next to the Groenplaats station, walking a couple of blocks, is the majestic Plantin-Moretus Museum, a heritage treasure of Antwerp. The building had its origins as a printing press in the sixteenth century, belonging to the publisher and bookseller Cristóbal Plantino. In 1876, it became a museum open to the general public, and later became an UNESCO World Heritage Site in 2005. Inside it has unpublished works, among which the 36-line Gutenberg Bible and famous books by scholar Justo Lipsio stand out. Map via upload.wikimedia.org
See map full resolution. It may take a little bit to load.