The Metro of Medellin has 2 lines and 28 stations. To serve the entire city it relies on cable car, tramway and BLR services. From Monday to Saturday it works from 4:30 a.m. to 11:00 p.m. There is not a direct connection to the airport. The price for a single trip is $ 2,300 COP. But you can also get cheaper prices using travel cards.

Metros in Colombia: The Medellin Metro

The Medellin Metro is part of the transportation system of the city of Medellin located in the department of Antioquia. Beyond Medellin, the Metro System connects to municipalities near this city to the north, south, east and west of the city called "El Valle de Aburrá".

Until now, the Medellin metro with its first line inaugurated in 1995, it is the only Metro System in Colombia since the capital Bogota has a Bus Rapid Transport System, but the project of construction has not been implemented yet.

In 1979 the company “Empresa de Transporte Masivo del Valle de Aburrá Limitada” was created only for the operation and construction of the transport system of the city. The company started with the feasibility studies and routes to begin the construction of the project with a fifty-fifty percent participation between the administration of the department and the municipality on the works and ownership of the system.

For the year 1984, foreign contracts were made with companies from Germany and Spain for the construction of the first line. So, for the following year in 1985, the first line began. This line went from Niquia to El Poblado (north to south).

The Metro have two main lines: one blue and one orange. Both are elevated and with ground-level sections. The longest, the Blue Line (A), runs through the city from north to south along the Medellin River. There are other transportation options complementing the system such us metro cable and bus lines.

It was the first line of the system inaugurated on November 30, 1995. It crosses el Valle de Aburrá from south to north in a stretch of 25.8 kilometers. It has an approximate capacity for 35,555 passengers per hour in each direction. The journey takes approximately 40 minutes with 3.5 minute intervals for each station.

Line B was inaugurated on February 28, 1996. It crosses the valley from east to west. The length of the line is 5.3 km. It has capacity to transport 13100 passengers per hour in each direction. Travelling the whole line takes 10 minutes. This line has 7 stations: San Antonio, Cisneros, suramericana, Estadio, Floresta, Santa Lucía, San Javier.

The stations to make connection are: San Antonio, Cisneros and San Javier.

Inaugurated in August 2004, the cable car line helps communicate the north-eastern part of the city of Medellin. It has a length of 2.07 kilometers and can carry up to 3000 passengers per hour in each direction. The tour lasts about 9 minutes.

Inaugurated in August 2008, the J cable car line helps to communicate the central-western area of ​​the city of Medellin. It has a length of 2.7 kilometers and can carry up to 3000 passengers per hour in each direction. The tour lasts around 12 minutes.

The only transfer station is: San Javier.

Inaugurated in February 2010, the L cable car line connects the north-eastern part of the city of Medellin (it is the second section of the K line). It has a length of 4.6 kilometers and can transport up to 1200 passengers per hour in each direction. The tour lasts around 12 minutes.

This cable car has 2 stations: Santo Domingo Savio and Arví

The station to make connection is: Santo Domingo

Inaugurated in December 2016, the cable car line H communicates the central-eastern area of ​​the city of Medellin. It has a length of 1.4, kilometers and can transport up to 1800 passengers per hour in each direction. The trip lasts about 5 minutes.

The station to make connection is: Oriente.

The cable car line (under construction) M communicates the center-east area of ​​the city of Medellin. It has a length of 1.05 kilometers and can transport up to 2500 passengers per hour in each direction. The trip lasts around 4 minutes.

The station to make connection is: Miraflores.

The first tramway line of the new transport system of the city was inaugurated on March 31, 2016. It uses Translohr technology (systems guided by a single lane). It has a length of 4.2 kilometers and capacity to transport at 5400 per hour in each direction. A ride on the tramway can last 17 minutes with an average speed of 16 km / k. 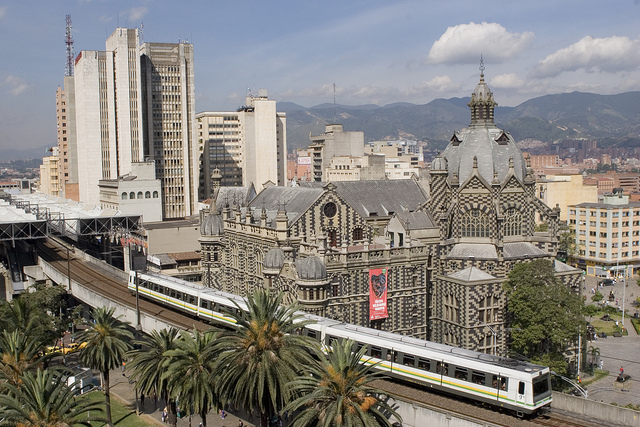 The airport with a greater influx is the José María Córdoba airport, which is located 50 minutes from the city. Until now there is no direct connection to this metro system and passengers who go to the airport should take buses or taxis to get there.

Schedule in the Medellin Metro System

The Medellin Metro System divides its schedules into different zones depending on the area, the day and the influx of passengers.

On Sundays and holidays:

In the rush hours when the user volume of passengers is higher, between 5 am and 7 am and between 3 pm and 7 pm, the metro service has planned some 'Express Routes' to speed up the mobility of users from Monday to Friday.

1. Express train with green indicator: they do not stop at the Madera, Exposiciones, Aguacatala and Sabaneta stations.

2. Express train with orange indicator: they do not stop at the Tercentenary, Prado, Alpujarra and Ayurá stations.

The fares for the Metro System and metro cable system are the following:

With the Civic card, that can be purchased at the major metro stations, you get the benefit of lower rates and security in case of loss. The Civic card gives a particular discount with the integrated system of buses and metro cable car of the city. For the issuance of this card is necessary a document that accredits the person who requests it.

For users who do not have a Civic Card, the cost of an eventual trip in metro and metro cable car is $ 2,300 COP.

Finally, the rates of the metro cable to the Arví Park are the following:

With or without a Civic Card and Sisben: any journey costs $5200 COP

For more information about the price of tickets to other municipalities connecting to the metro system and the integrated bus lines see here and here.

Medellin metro has an ambitious expansion plan for the year 2030:

• For 2017 the metro cable car M line is under construction.

• The following extensions are planned to be completed by 2020:

What to see from the Medellin metro

The Medellin metro, per se, is a tourist attraction. Going from end to end is great experience for tourists.

To help passengers and tourists, a friendly voice warns the approaching station and the points of interest that are nearby to visit.

1. Cisneros or Alpujarra Station - EPM Smart Building: The Medellin Public Companies building is located in an open area. It is a building with a big automation component to provide public services to the city. At night you can see it decorated by different colors that change from time to time.

2. San Antonio Station - Palace of Culture: Gothic style, designed by the architect Agustín Goovaerts, between 1929 and 1937, the palace of culture is a structure that undoubtedly attracts the attention of tourists and locals.

At the beginning the building was headquarters of the departmental government. At present, it is the home of a cultural center with a great offer of history and art.

3. Stadium Station - Atanacio Giradot sports unit: The sports unit is the largest sports center in Colombia and one of the most complete in Latin America. It has hosted different international sporting events and serves as a recreational center for all citizens.

This cathedral designed by the French architect Emile Carré in a neo-romantic style. It was declared a national monument in 1982.

5. Metro cable car Arví Station – Arvi Park: In the last station of the Metro cable car L line, there is the Arví Park. This is a sanctuary of fauna and flora located in the municipality of Santa Elena. It is a scene of relaxation and entertainment for field trips and walks. It has camping areas in its 1700 hectares.

6. University Station - Botanical Garden: Divided into showrooms, the botanical garden Alberta hundreds of plant species that highlight the diversity of South America. The garden is famous for its orchid exhibitions.

7. Industrial Station - Pueblito Paisa: Located at the top of hill Nutibara, El pueblito paisa is a replica of the traditional construction of the villages of Antioquia. A square in a central stone with a water fountain, a church, the town hall, the barber shop and the school are elements that are not missing in any town center of the department.

8. Berrio Park Station -Botero Square: The Botero Squeare houses 23 sculptures by the famous artist from Medellin, open to the public for their enjoyment and recreation.

The square is surrounded by the Museum of Antioquia and the Palace of Culture.

9. Poblado Station - Lleras Park: Lleras Park is a center of entertainment and fun where you can find all kinds of typical and international restaurants, galleries, bars and places to dance.

10. University Station – Explora Park: This is an interactive science park that houses 4400 specimens of the Marine fauna of Colombia and the world. The assistants can make experiments and have contact with science in different ways.

11. Santo Domingo Metro cable Station – Spain Library: The library Spain is stuck in the northeastern districts of the city. This is an icon of the city because, apart from breaking with traditional architecture, it meant a cultural change in one of the most dangerous places in the city. It was opened to the public in the year 2007.